Can we knock it off with the robot talk? Star Trek told us this 50 years ago. Recently it was all about drones. Next it will be glow in the dark cement, chainsaw ice skating and printing roads. Yes I get it. Just when you think it couldn’t get any better, it gets better.

As someone famous once said:

The Myth of the Celebrity Premium

When you get to the top of the celebrity mountain, you can’t go higher, price-wise so it is not good. Unfortunately for celebrities, just because they are celebrities, doesn’t mean they enjoy a premium price for their homes.

Chris Leavitt, a top real estate broker for Douglas Elliman, clearly articulated this during his interview with FoxBusiness’ Maria Bartiromo.

I’ve long held that the celebrity premium in real estate is myth. Many confuse asking price with sales price after the dust settles. The swirl of advisors and perhaps heavy dose of narcissism may be the root of over pricing a home for sale. While examples of a premium may be evident in some transactions, an outlier selling price can also occur in non-celebrity transactions as well. At a property level, price trends are not smooth lines and outliers can occur in any market segment.

There was an article based on Realtor.com research that indicated the marketing time for celebrity homes are twice as long as non-celebrity homes. Of course! If I were a celebrity hawking a luxury property, I would think the greater exposure to the media would generate a bigger price. But in reality, the buyer of the home may also be a celebrity or bold faced name and is surrounded by many advisors.

In a high priced housing market like Manhattan, there is an unusually large concentration of buyers that are entertainment and business celebrities so one could almost say (and I am exaggerating a bit) that they are the market.

A few years ago, I dubbed the overpricing of high end real estate as “Aspirational Pricing”. This describes a listing where the asking price has no relationship to competition or current market trends. The seller value disconnect with the market likely nets them a lower price in the long run. Here’s a scenario:

“We had good traffic, but nobody was offering because [the apartment] was overpriced,” Mr. Cox said. “I’m 100 percent sure we could have gotten him $2.45 million on this particular apartment, but we went into contract at $2.3 million. And at the end of the day, [the] seller is super mad at himself because we are in contract now for $150,000 less than I told him we would sell it for, and it’s purely because he didn’t listen because he as a seller [thought he] knew more than I knew as a broker.”

This is now the situation for new super luxury condo development product coming to the market in Manhattan. Pricing for a lot of the product coming online today was probably set in 2014 at “Peak New Development” pricing but for some projects, the value may be 10% to 20% less (not all, however). The developers that don’t respect the bid-ask spread as too wide, will see their projects stall by essentially waiting for a lot more competition appear nearby.

There is continued demand for new development product at all price levels, but for the top of the market, not at pricing established in 2014. By waiting to assimilate to the new pricing, the developer will end up achieving a lower price for their product. Actions like switching marketing companies, ramping up public relations and creating more brochures won’t bridge the gap between asking prices and market value. It’s just window dressing to the larger problem of accurate pricing (ironically there are no wind dressings in new development). I repeatedly see this seller mindset in weakening markets over the past 30 years, both in new development and individual transactions.

After last week’s embarrassing developer comments blaming the media for the market slow down, there was some very candid commentary by the most respected developers in the New York market.

Here’s something I said in a great Bloomberg piece that provided a “tell” for the weakening state of the market and it concerned financing: Condos at NYC’s ‘Ground Zero Mosque’ Site Get Global Financing

The financing deal is “indicative of what’s going on in the market — there’s a lot more pushback from the past go-to sources for financing,” said Jonathan Miller, president of New York appraisal firm Miller Samuel Inc. “Since early 2016, lenders in this property class have begun to pull back.”

History doesn’t repeat itself but sometimes it rhymes.

Thrown to the Curbed

This past week, I decided to get back (on the horse) to do what I love, make more charts about quirky market patterns. And speaking of horses, a while back I was sent a script to do a housing reality show in Texas where I would be the property guru and tell the homeowners in the middle of a bad deal things like “When you fall off a horse you gotta get back on.” (full disclosure: I’ve never been on a horse nor have I spun old timey sayings to calm people down, nor would I ever do a “reality” show despite being approached 5 times).

I switched on my Three Cents Worth column over at the Curbed Network, hoping to maintain a weekly presence in New York as well as regular intervals in the other markets we cover in our research for the report series published by Douglas Elliman Real Estate.

Three Cents Worth: Why You Can No Longer Afford Your Manhattan Rent
Real estate guru Jonathan Miller is back with a column about New York’s frustrating rental market

The following charts used in the column illustrate a rental market that is soft at the top. 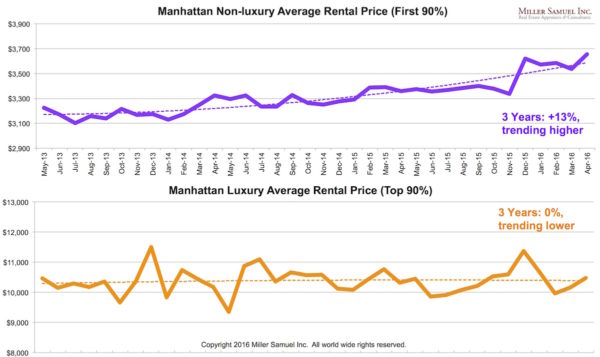 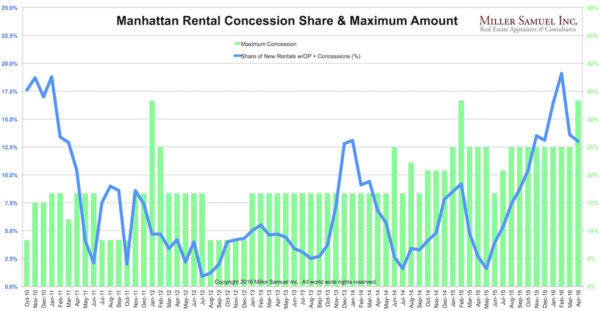 Curbed Hamptons
[Three Cents Worth] Forget Spring; the Big Stuff Sells at Year End
But why?

Over the past few years I’ve noticed that high end sales in the Hamptons skew towards the end of the year since the financial crisis. Other than there being more focus of tax implications, it’s not quite clear why we are seeing this pattern.

Affordability and Gentrification At Odds

There are many different interpretations of what gentrification means, especially to housing. I prefer the version in this video:

“The production of space for more affluent users.”

The rapid pace of gentrification has stirred much more community push back world wide. Hipsters and artists have long been the “canary in the coal mine” by providing early evidence of the eventual gentrification of a neighborhood. It’s not just a NYC or U.S. phenomenon. It’s an international pattern.

There seems to be two views of what a neighborhood means.

But don’t ever have a neighbor like this: Passive aggressive woman knows how to piss off neighbor: suit 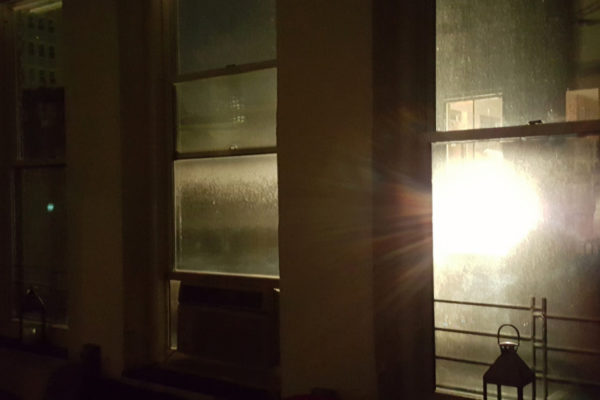 Here are a few charts I updated using the results from both 1Q16 Miami market reports I prepare. 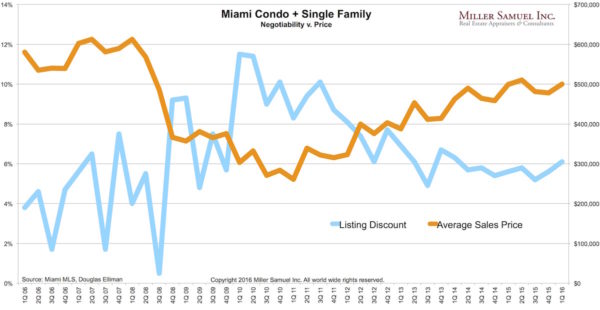 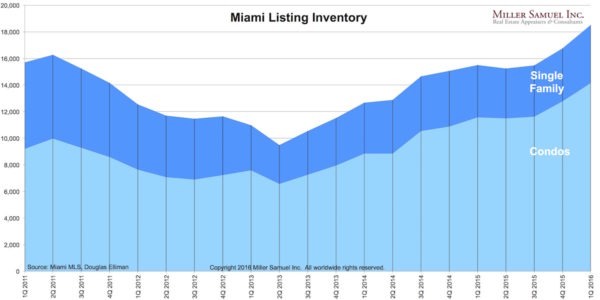 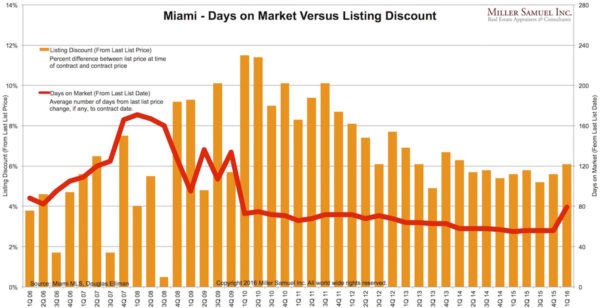 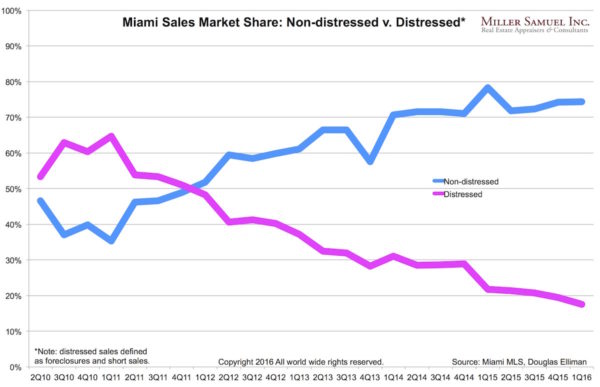 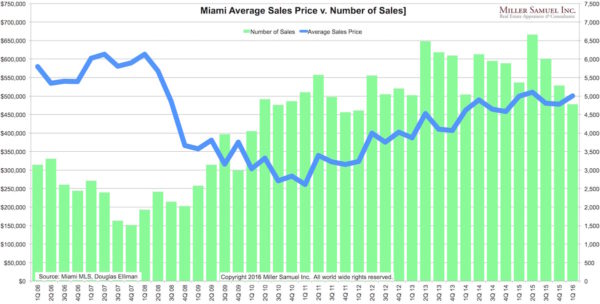 If you need something rock solid in your life (particularly on Friday afternoons), sign up for my Housing Note here. And be sure to share with a friend or colleague. They’ll feel like chainsaw ice skating, you’ll feel like a printed road and I’ll be opt not to be a robot.