The crap New Yorkers read early in the pandemic got lots of SEO points but was a disservice to the public. There is nothing wrong with being critical, but proclamations about a dire dystopian hellscape future became its own misleading narrative. This CNBC tweet comparison uses our data from the recent rental report discussed later on in these notes.

This week Douglas Elliman published our April rental market research for Manhattan, Brooklyn, and Queens. This is part of a growing Elliman Report series I’ve been authoring since 1994.

Over the four months, prior to April, it was beginning to look like rental prices were beginning to stabilize. After all, net effective median rental price did not see a decline for four straight months and the rate of annual declines, while still huge, at 16%, were down significantly from 20%+ in the fall. 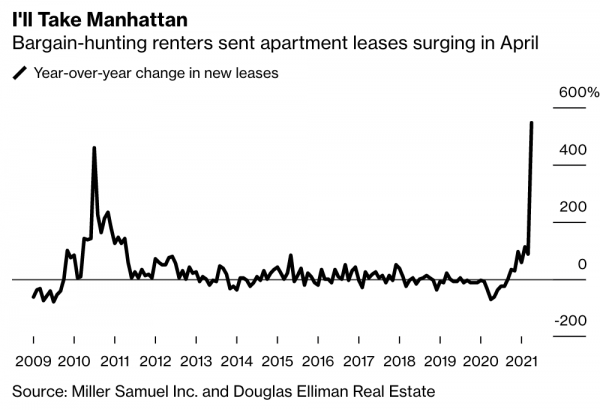 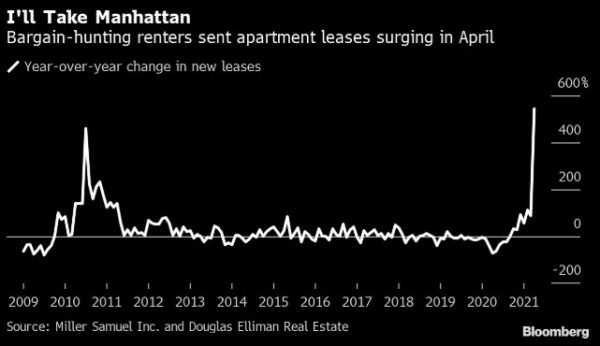 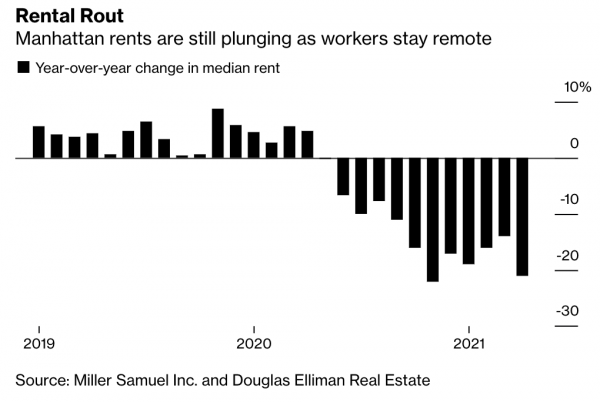 “The highest number of new lease signings on record spurred on by continued price declines.” 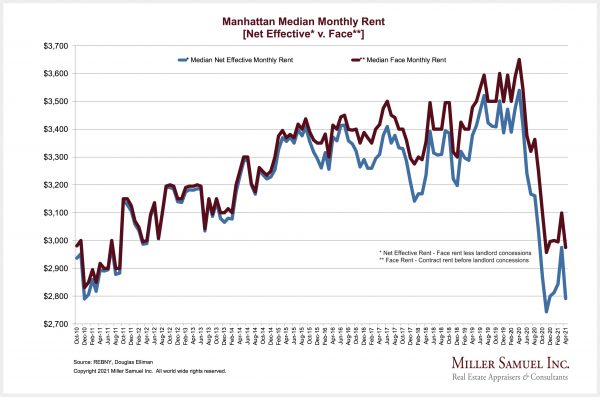 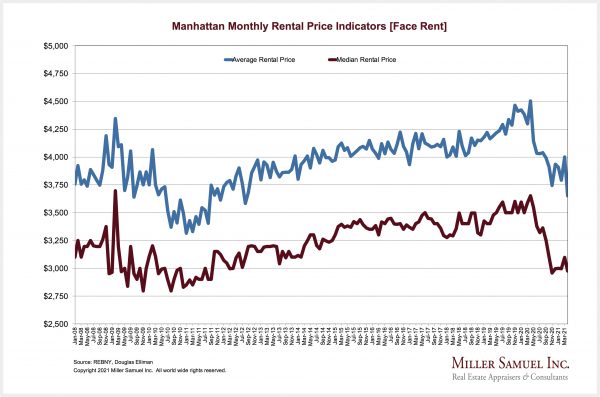 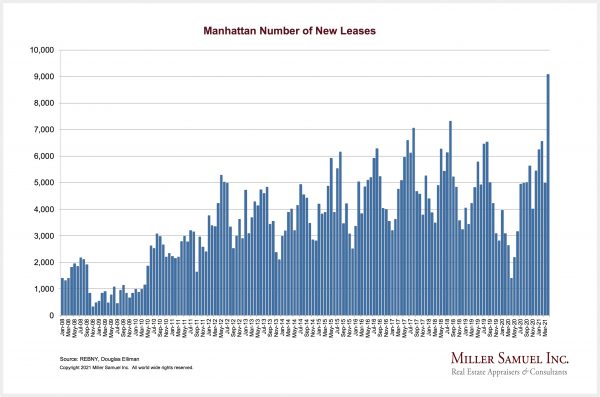 “The market was characterized by record new lease signings combined with a record decline in net effective median rent.” 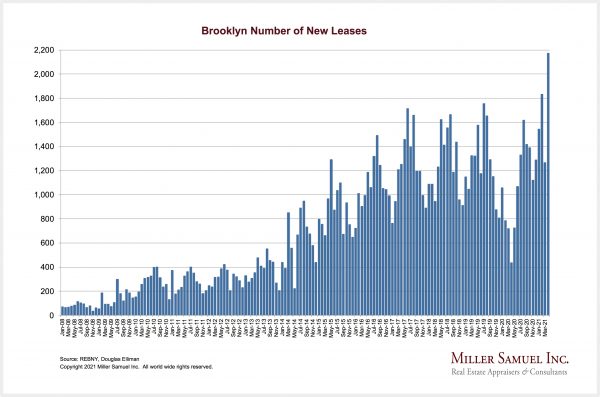 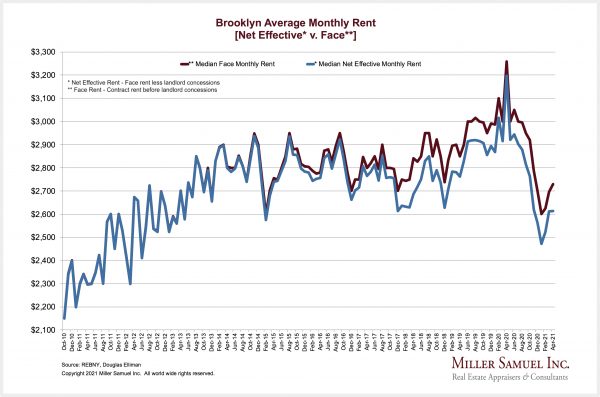 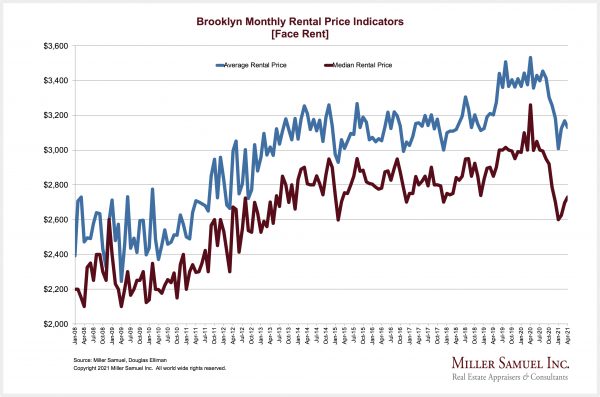 [Northwest Region]
“The numbers of leases surged to a new record as net effective median rent fell month over month for the twelfth time.” 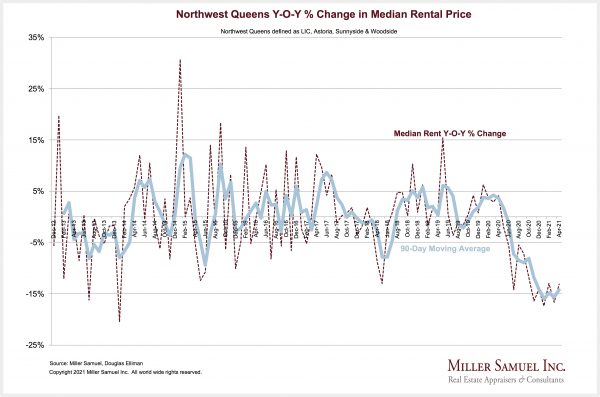 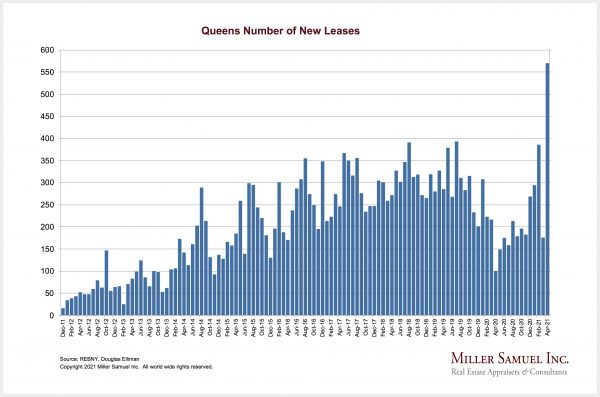 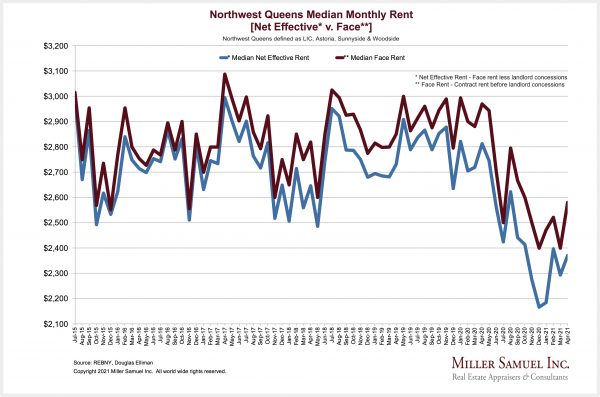 My NY Times Sunday Real Estate Calculator Column monthly feature came a little early this month: How Real Estate Blew Up in the Hamptons and Greenwich.

I thought it would be interesting to understand see how these markets were showing very robust conditions yet represented two different types of markets – Greenwich, CT as a primary market and the Hamptons as a “coprimary” aka luxury second home market.

With the U.S. and regional economic damage focused on lower-wage earners, higher-end homes, and specifically luxury submarkets have thrived since last summer after languishing for the past several years. 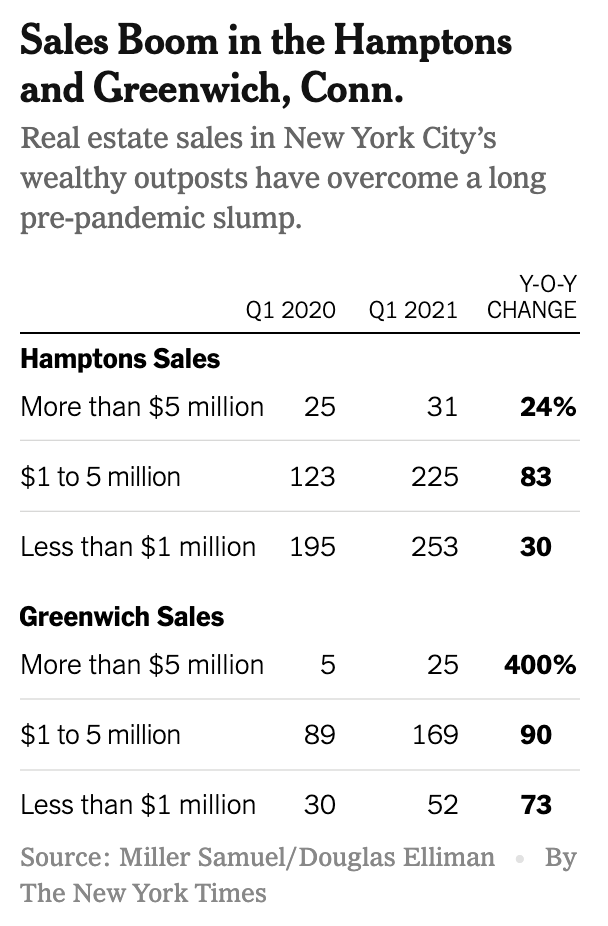 The recalibration of these markets continues.

If you live in and around NYC, you know have a sense of what housing prices are. You should. Everybody talks about it all the time and we are flooded with information about it. It’s a regional obsession.

Earlier this week, my phone, text, and Twitter feed lit up after NYC mayoral candidate Shaun Donovan was asked what the median price of a Brooklyn home was. He guessed $100,000. For those that don’t know, Shaun is a policy wonk with a lot of affordable housing policy proposals. After all, he was the U.S. Secretary of Housing and Urban Development (HUD) from 2009 to 2014, and the Commissioner of the New York City Department of Housing Preservation and Development (HPD) from 2004 to 2009.

The problem with his answer was that he was $800,000 off and Brooklyn housing prices haven’t been that low in 40 years. That was troubling to many who are looking to the next mayor to provide policy solutions to create more affordable housing. It’s one of the key issues facing the city. Donovan punted and claimed he thought the question was about “assessed value” which is not a believable pivot.

My favorite Twitter question was this and be sure to read the thread:

PLEASE @jonathanmiller tell us when this was true. My guess: Sometime during the original run of Cheers. https://t.co/cBn90Ofm7t

I can't fall down this rabbit hole today, but I'd really like to know the last time the median home price in Brooklyn was $100K. When I moved here in 2005, my first beat was real estate/development, and the median price had to have been quadruple that, at least. @jonathanmiller? https://t.co/I3y1gbar5v

The New York Times shared his error in their piece Shaun Donovan Mayoral Endorsement Interview and started the firestorm also linked out to my firm as the source of the $900,000 Brooklyn median sales price, a reference to our Elliman Report: Q1-2021 Brooklyn Sales. 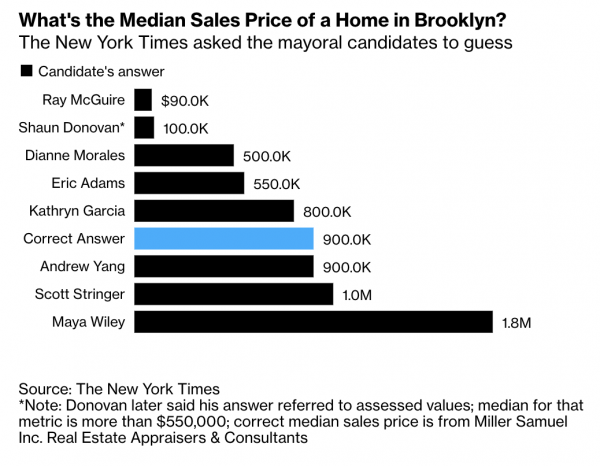 And a Slate piece New York’s Mayoral Candidates Fail the “Price of Housing” Question contained the best quote of the day:

In relative terms, then, Donovan’s appraisal of the Brooklyn housing market is wrong in the same way it would be wrong to guess that a Big Mac meal costs $1, a can of Coke costs 12 cents, or a gallon of gas costs 40 cents. 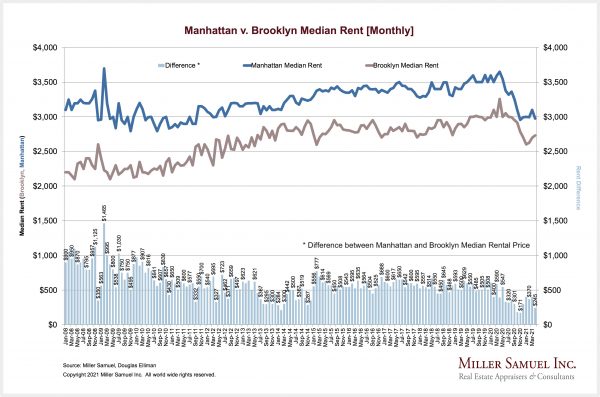 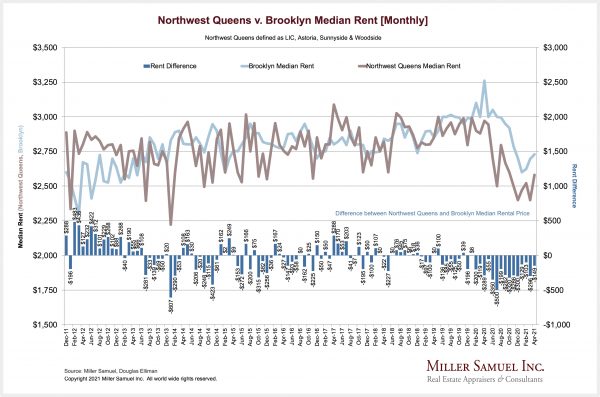 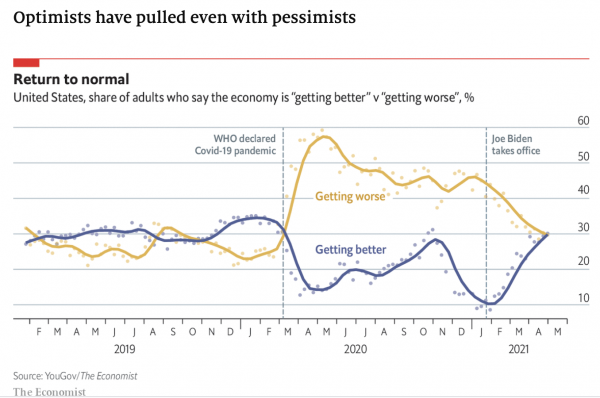 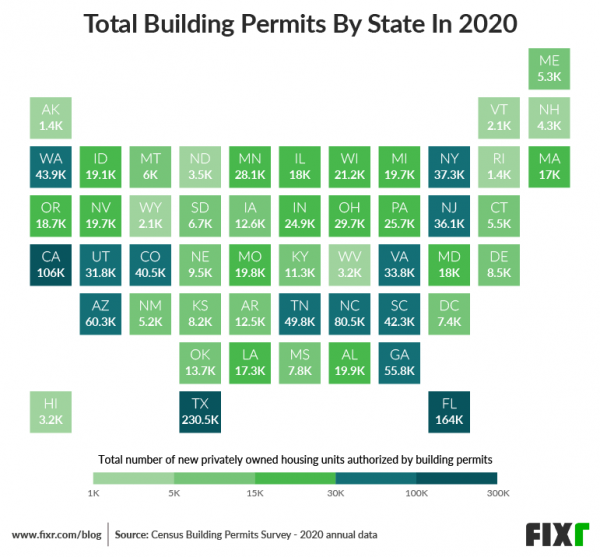 Who Knew? Solar Energy Is More Important To Appraisers Than USPAP Politics?

Based on the view count at Appraisal Buzzcast, it sure looks like appraisers want to know more about solar energy than any other recent topic.

I think Jeremy’s concern is even more serious for Texas because of the recent TAF decision to extend the current edition of USPAP for another year due to COVID without any advanced notice to the 55 states and territories. It is clear that TAF is feeling public pressure to expand beyond the two-year cycle and using COVID as an excuse was simply a way to save face.

May 11, 2021 Release From Appraiser Jeremy Bagott

– In his column last year in the Austin American-Statesman, appraiser Jeremy Bagott warned that the Texas Appraiser Licensing & Certification Board was in open violation of Texas state law.

In a column this month in the Lubbock Avalanche-Journal, Bagott warns that the horse has bolted – all 254 central appraisal districts, which function as county assessors in the Lone Star State, have repeated the defect in their biennial reappraisal plans. The state’s Department of Banking, Department of Housing and Community Affairs, Credit Union Department and Public Utility Commission are similarly in violation of Texas administrative law.

After his column ran in the Statesman, a number of appraisers asked Bagott for suggested wording that cautions clients and intended users that the “2020-2021 Uniform Standards of Professional Appraisal Practice” have not been adopted into Texas law. He suggested the following:

The client and any intended users should be aware that the Texas Appraiser Licensing & Certification Board Commissioner has not submitted the “2020-2021 Uniform Standards of Professional Appraisal Practice” to a required notice-and-comment rulemaking pursuant to the procedures and standards set forth in the Texas Administrative Procedure Act (Texas Government Code § 2001.021). In addition, Title 1 of the Texas Administrative Code § 91.40 requires any state agency adopting by reference (ABR) a document into law to “note the revision date of the ABR information” and to “amend the rule to adopt a newer version of the ABR information.” This requirement has not been met either. Absent a required rulemaking, the “2020-2021 Uniform Standards of Professional Appraisal Practice” is not recognized by the State of Texas and would not likely be enforceable if challenged.

The scofflaw activity is linked to the two-year change cycle of the standards. Some states cannot reliably complete a required rulemaking in a two-year period, so they bluff.

“I think it’s been an article of faith among the state’s mortgagors, underwriters, investors and bank depositors that USPAP is enforceable in Texas,” said Bagott. “Sadly, it’s likely not the case, because of the deficient rulemaking.”

Appraisers may now need to disclose this in their reports, so as not to risk inadvertently misleading their clients.

“I think people would be very surprised to learn of this,” said Bagott. “It’s regrettable.”

Hoisting the flag of waste and abuse, Jeremy Bagott, a licensed appraiser and former newspaperman, issues a clarion call in his 2019 book “Dispatches from the Cosmic Cobra Breeding Farm.” He takes the reader deep inside a tiny Washington, D.C., foundation that has managed to have its copyrighted code of conduct enshrined in federal and state law. All 50 states, even the U.S. territories of Guam and the Northern Mariana Islands, now enforce it. The 14-employee nonprofit, known as the Appraisal Foundation, has parlayed the arrangement into a lucrative publishing cartel with top officers and favored trustees jet-setting to Europe and Asia. In the process, the author uncovers a troubling trend deep in the plumbing of government.

A spellbinding extract from The Art of the Marbler – 1970 – by the Bedfordshire Record Office of Cockerell marbling. pic.twitter.com/Zn47bRF0vt