iBuyers Are Here, But We Still House Antisocial Feelings

I’ve been taking the commuter train from Connecticut into Manhattan since 1990 and much of my daily ride was full of open newspapers before handheld devices became ubiquitous. The morning read of the car tended to be NYT/WSJ/FT and the evening was the NYPost/NYDailyNews as well as a thorough handwashing to remove the black ink:

All this technology is making us antisocial. pic.twitter.com/Go3zRWqvQt

Real estate giant Douglas Elliman released our research today for the April rental market covering Manhattan, Brooklyn and Northwest Queens. This market report is part of the expanding Elliman Report series I have been authoring since 1994.

Bloomberg included two charts (a twofer!) so that needs a shout out. Click on either for the Bloomberg coverage. 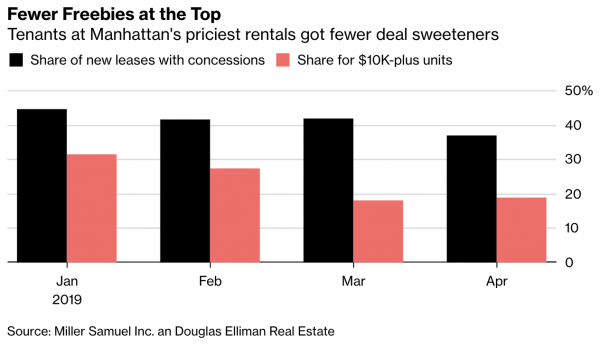 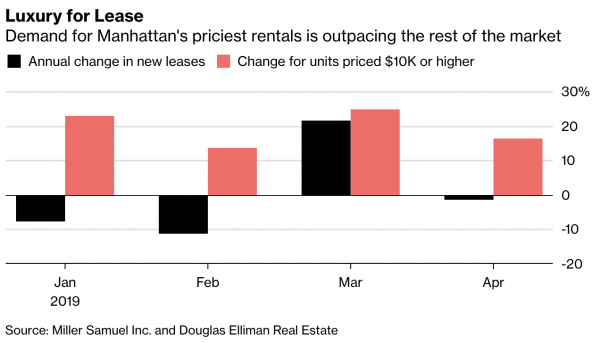 Here are some of our Manhattan charts. 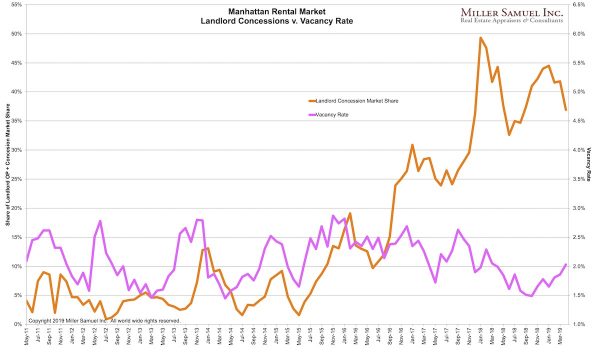 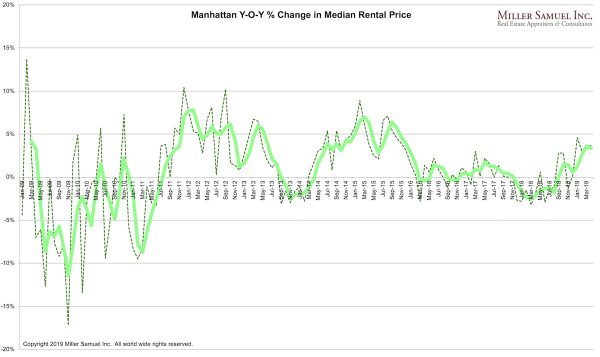 BROOKLYN
“The decline in market share of rentals with concessions continued to accelerate.”

These are some of our Brooklyn charts. 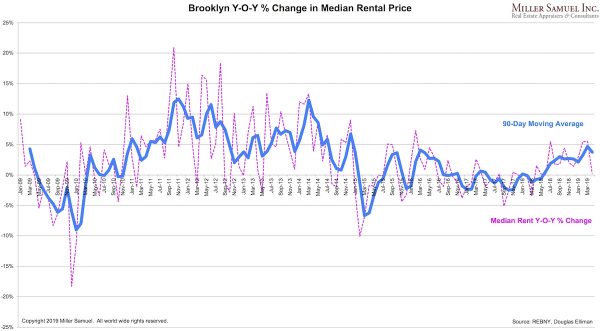 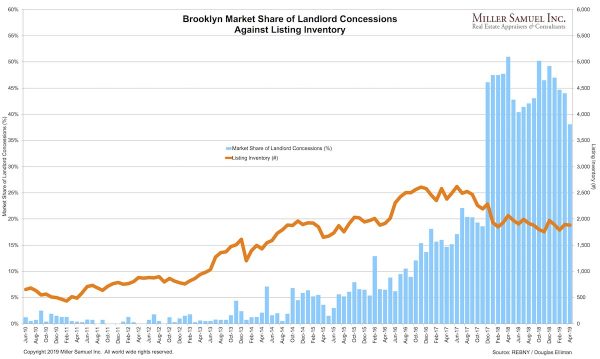 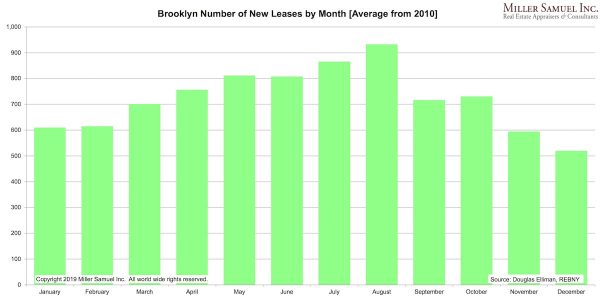 These are some of our Queens charts. 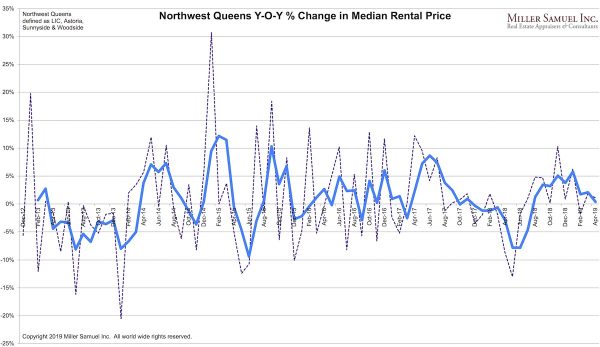 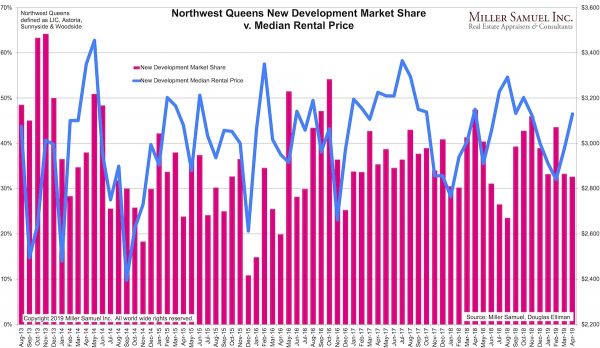 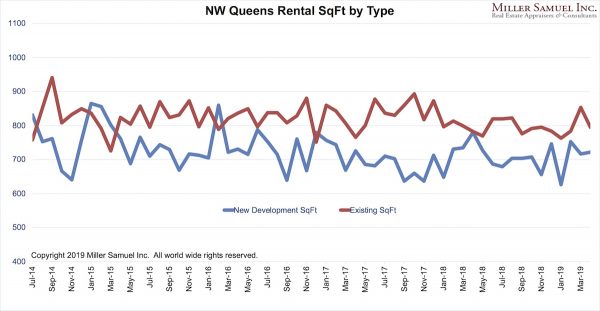 My Views on the Value of Views

There is an epic New York Times real estate cover story out today that will be available in print this weekend that covers my takes on the impact of views on value and the philosophy behind it. These insights were developed during our appraisal firm Miller Samuel‘s 33 years of existence and tens of thousands of appraisals completed by our team. Both the photos and the write-up were terrific and I’m super proud to be a key part of this story. Click on the image to read the story and see more photos. 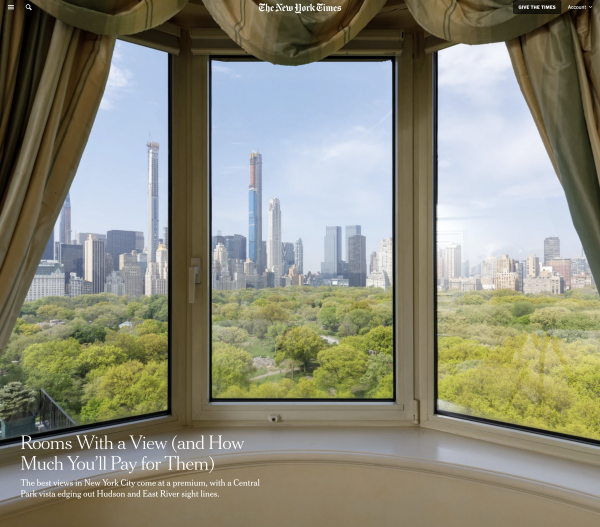 “Flip” is the New 4-Letter Word

Many young investors haven’t seen a declining market and took excessive risks. With the proliferation of flipping shows (mostly shot in Canada BTW) who can blame them? It was not so long ago that we were all talking about how young people had never seen a rising housing market.

The changes in some markets are quite pronounced making flipping inherently a bad idea. 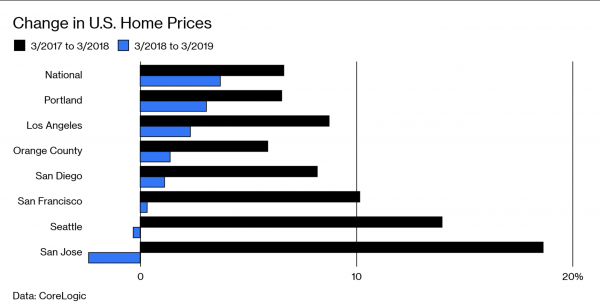 Some Analog Thoughts About The iBuyer Industry

Ben Casselman pens a great piece in the New York Times: Real Estate’s Latest Bid: Zillow Wants to Buy Your House. If you click on the tweet first (not the link to the article) you get a great thread that breaks it all down.

There was an article in the Wall Street Journal: Miami Condo King Brought Back to Earth by Luxury Home Price Correction on setting listing prices in Miami from the perspective of one of the most prolific developers there, George Perez of Related. Here is the history of the penthouse he owns at the development he built known as 1 Collins in Miami: 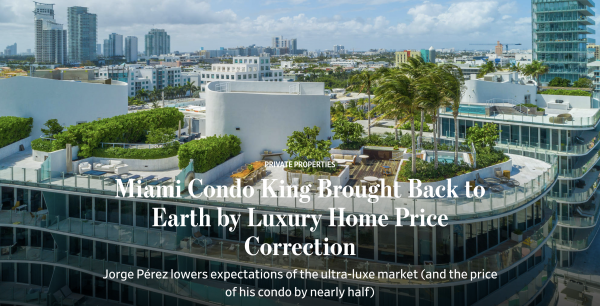 This was a twofer – two of my good friends talking about the real estate market and I get a shoutout! Ok, ok, that’s not why I’m sharing this. This was a really enjoyable listen on the topic that drives you to read Housing Notes – you’ll get a sense of how Ivy has been so darn accurate during her career and what she sees now.

Another great “Howmuch.net” visual on mortgage payments. The idea that the average payment in Santa Cruz, CA is $2,940 and in Coffeyville, Kansas is $205 – is mindblowing. 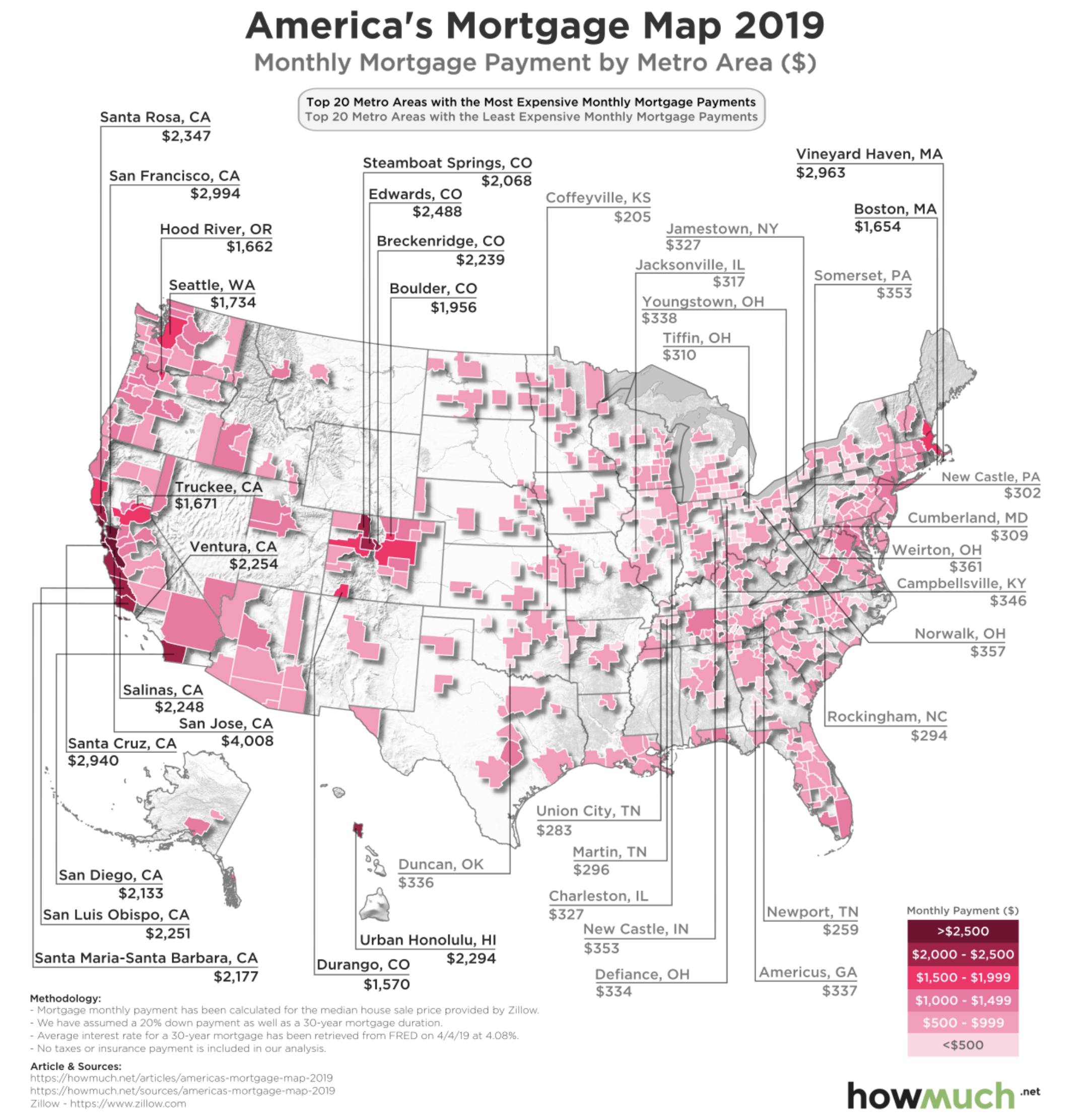 One of the hopes of housing market observers is for continued growth in wages after falling behind housing price gains. Wages are clearly rising but the rate of growth is leveling, which is especially disappointing after the large stimulus insertion into the economy by the tax cut in 2018. 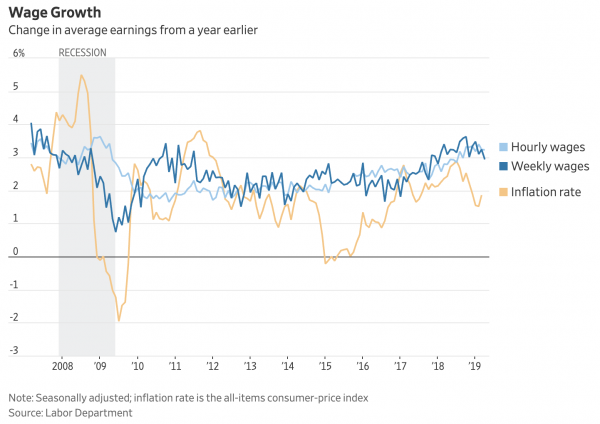 NY Fed: The probability of U.S. Recession as predicted by Treasury Spread was 27.5% in April. 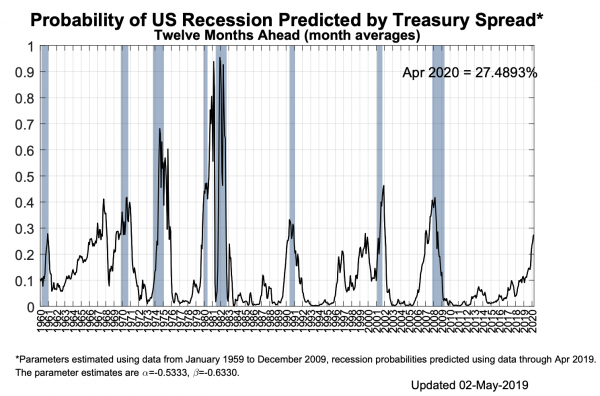 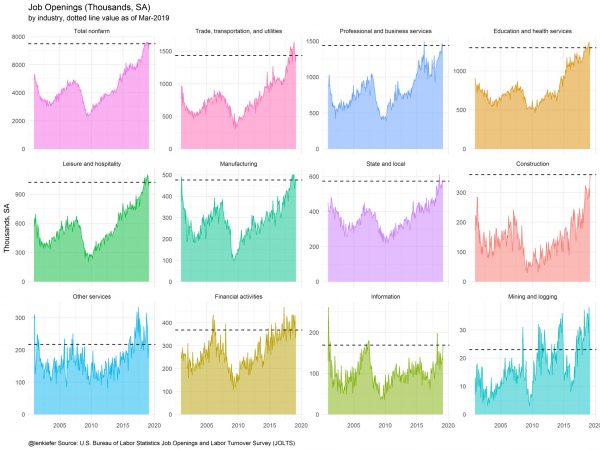 Obviously, it is easy to unlock a pdf report, but we lock every report as an effort to maintain report integrity. This should be a regulatory requirement. Periodically we have seen reports we delivered electronically that ended up being modified to the client’s needs.

This almost happened a week ago.

My firm received this request from Servicelink on a BoA request. In accordance with the new AMC law in New York State, we are including the invoice with our reports. This was the first report to this particular BOA group since the new law was activated so it is reasonable to assume that the BOA clerk handling the appraisal didn’t know what to do about the invoice and Servicelink was passing along the request. The law itself says the invoice must be delivered with the report which infers but doesn’t specifically state that the invoice should be within the report pdf. I would imagine there will be a lot of attempts by lenders to get rid of invoices out of habit but after a while, once appraisers start seeing invoices missing from the applicant copy when an applicant calls the appraiser, the appraiser needs to complain to the CFPB. I remain skeptical that lenders will be able to sustain a systemic fraud or ignorance to the spirit of the NY AMC law by hiding the invoices from the applicant and risk doing future business in one of the largest mortgage markets in the U.S.

Our client, Bank of America, has accepted both appraisal reports. Unfortunately, they are having issues uploading the documents into their system due to them being locked and password protected. Are you able to modify the permissions to allow printing and unlock the document? Please let me know as soon as possible so we can deliver to the client.

Red flag: How could they have accepted the report but never uploaded it?

I personally tested the pdf they sent back to us as well as our original copy. They both printed as usual so we told them they must have a software issue on their end. We have never had to deliver unlocked reports to this client and as practice. It is ALWAYS inappropriate for an AMC to request an unlocked report. There is only a nefarious reason behind it, even if the requestor themselves have no idea.

Here is how we respond to these things:

Thank you so much for the business. We greatly appreciate it!

Miller Samuel does not unlock pdf’s or remove passwords. So we just can’t help in this situation. This is done to protect the integrity of our report as a matter of policy with every client.

Thanks again and we look forward to working with you in the future!

Here’s what Servicelink told us after we said “no.”

We were just looking for a partnership here to try and meet the needs of what is a very important client to ServiceLink.

Until the new New York State AMC Law is fully adopted by the AMC industry, expect to get these requests. Part of the issue is software updates or internal procedural changes and part of it – like this example – is nefarious.

If AMCs weren’t invasive enough already on appraisers personal lives with overly-frequent status calls and other well-documented and demeaning requests, how about vacation time? In addition to the 37-page boilerplate order request the appraiser is required to read, appraisers now have to fill out another form.

The fact that Solidifi and their competitors are in business to fee out to the lowest bidder makes this request silly because appraisers don’t have that kind of relationship with AMCs. It goes like this. They send out an appraisal request to 10+ appraisers and one of them is on vacation and therefore doesn’t respond. Who cares? In my view, a business that treats its vendors like cattle, can’t call it a professional relationship. In fact, there IS NO RELATIONSHIP. The appraiser as the local market expert is really only a widget to them. AMCs can’t expect to have it both ways. If appraisers weren’t bombarded with paperwork and dogged by phone calls from a 19-year-old chewing gum already then this would not be an issue. 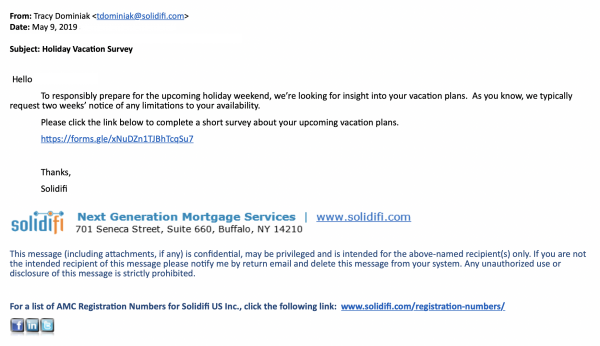 XOME Seems Concerned New York Borrowers Will Find Out How Little The Appraiser Gets?

An appraiser/reader sends me this text from an XOME appraisal request:

“Good Morning, The state of NY requires the appraiser to include their invoice in the report. AMC fee does not need disclosed. Please include an invoice in your report when uploading. Thank you”

This is technically accurate. Here is an excerpt from the NYS AMC Law:

38 (e) Knowingly fail to separately state the fees paid to an appraiser
39 for appraisal services and the fees charged by the appraisal management
40 company for services associated with the management of the appraisal
41 process to the client, borrower and any other payer.

Why would XOME go out of its way to tell their appraisers not to disclose the AMC portion of the fee the applicant paid? This is not a regulatory requirement that I am aware of. My firm includes our invoice at the top of the pdf and the pdf is locked (we don’t work with the XOME platform).

I hate Facebook. This pretty much sums it up.

Why is Facebook co-founder Chris Hughes saying it’s time to break up the company? He explains in this video op-ed. pic.twitter.com/mrAuP3QXzE