Jurassic Housing And Other Visualizations

With all the housing analytics out there, sometimes I get the urge to live in a cave (no, not a man-cave) like back in dinosaur times.

I have drawn the world’s worst pun pic.twitter.com/hhZxDXaHss 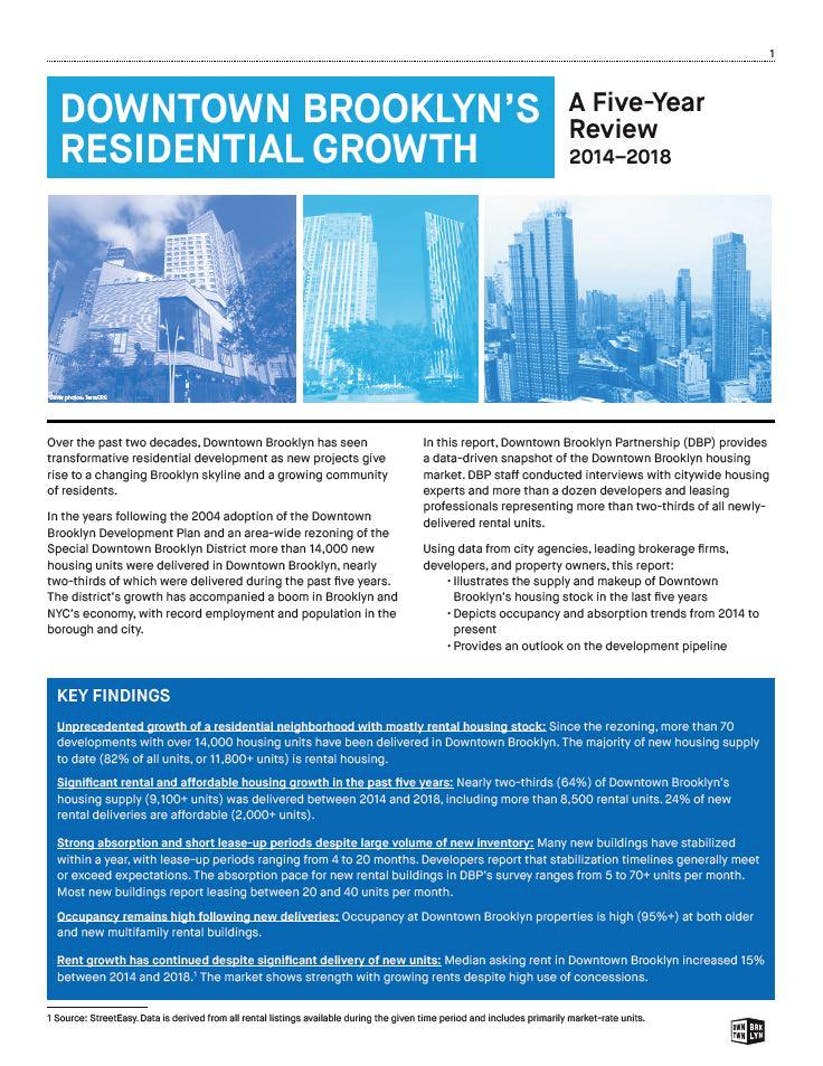 Like my ongoing relationship with the Downtown Alliance in Manhattan, I have started to work with the Downtown Brooklyn Partnership on their presentation of market conditions. Partnerships like this are established to promote/market the positive aspects of their particular submarket. DBP just released their five-year review and it is full of granular bits and pieces about the market, and separately, some quick facts. But first some background (from the report):

One of the market characteristics of the last five years has been the proliferation of rentals over condos, unlike Manhattan. This and other context is captured in the following chart. 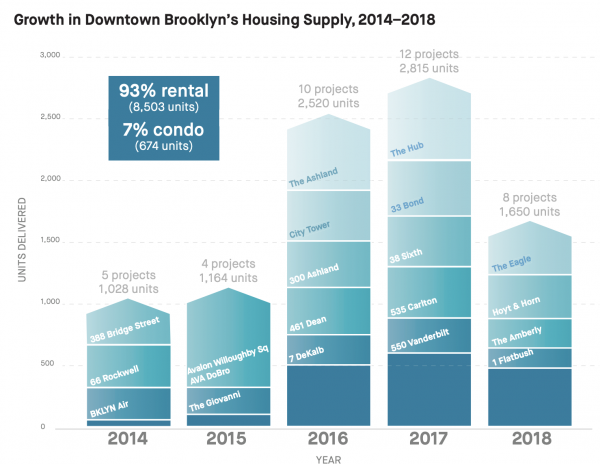 Finally, Connecticut Gets Good Housing News With Nary A “Nutmeg” Reference

This is another great read by Justin Fox at Bloomberg. My only complaint as a “Nutmegger” is that the MTA train image used in the article is more likely of the type of trains that go to Westchester County, New York. But my home state gets some long overdue economic love.

Going by third-quarter state gross domestic product data that were just released, Connecticut’s economy is on track to grow more than 2 percent in 2018! That’s … not much. But it’s better growth than the state has seen in more than a decade…U.S. real GDP grew 19.1 percent over that same period. The only other states that experienced GDP declines were Louisiana (0.2 percent), Mississippi (2.1 percent) and Wyoming (5.5 percent). 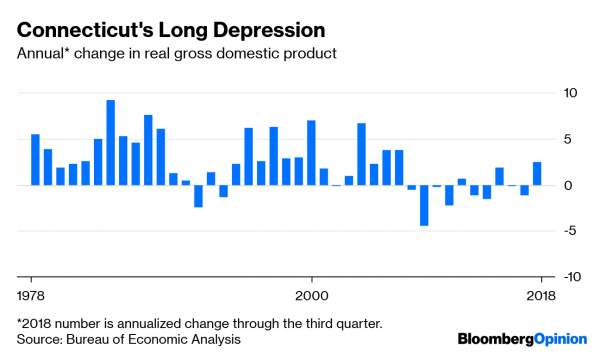 Housing price growth is in check… 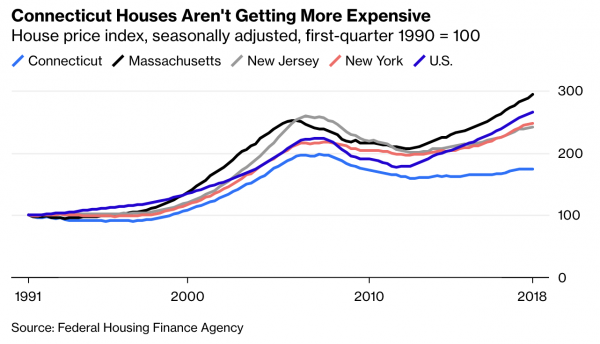 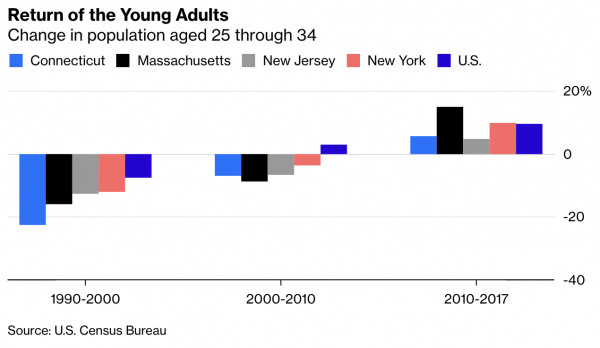 New York City Is Considering What Other Global Cities Already Have

One of the unique positions of New York City to global real estate investors has been the absence of a tax on foreign investors or vacant luxury units. This has been implemented in other cities such as Vancouver and the results to the local housing markets have been somewhat harsh. I bring this up because I believe such a tax will restrain sales transactions which generate significant tax revenue for the city. Combined with Fincen actions and the Tax Cuts and Jobs Act of 2017 that helped crush demand for high end real estate in high tax, high cost cities, NYC is gambling that this new tax to make up for decades of transit system neglect won’t make new development conditions worse.

And for those who think the SALT cap is going away…The SALT Cap Isn’t Going Anywhere, Right and Left Agree.

Each year the Knight Frank Wealth Report is published, I pour through their wealth visualizations and wonder why I didn’t do more homework in the seventh grade. Apparently, single malt whiskey is the number one non-real estate investment this year, yet I prefer craft beer. Knight Frank is the international affiliate of Douglas Elliman Real Estate, the company for whom I have authored the expanding market report series since 1994.

Here is a Wall Street Journal story on the report results: Can the World’s Wealthiest Absorb the High-End Home Glut?

And here are a couple of favorite visualizations in the Knight Frank Wealth Report. 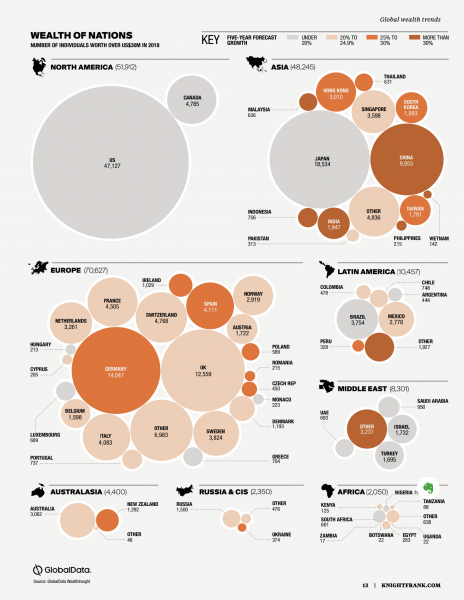 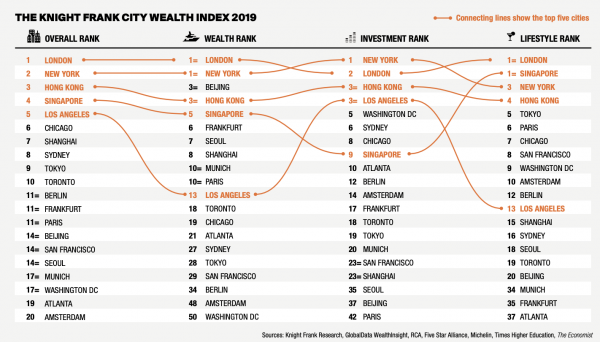 Another Way To Visualize Climate Change’s Impact on Housing

This art installation is fascinating. 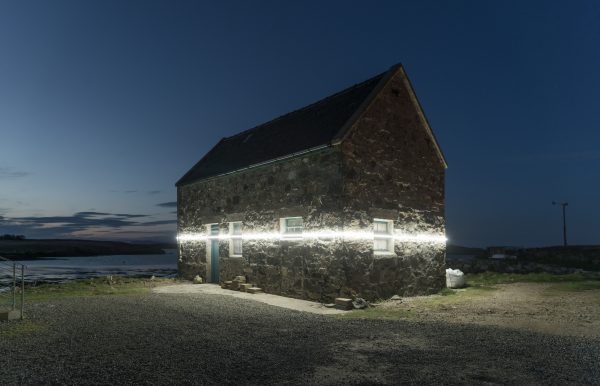 This is an oldy but a goodie. I haven’t drawn text bubbles in a while but was talking to someone about this sort of thing and showed this as a sample – I did this 5.5 years ago… 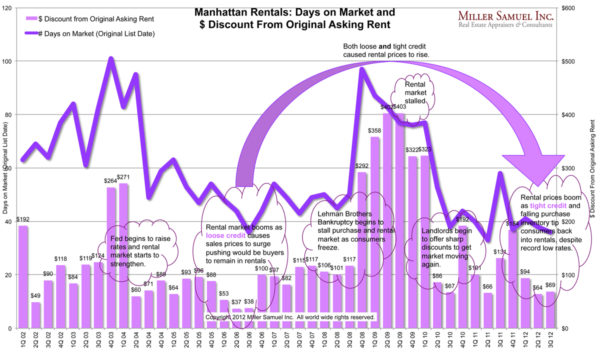 Murder And Death As A Valuation Specialty

There was a fascinating read in Rolling Stone about appraiser Randall Bell and his appraisal specialty.

He doesn’t believe that bulldozing the property removes the stigma. I’d love to know what he thinks about how stigma might change with market conditions. In my own market, tight conditions seem to have negated the impact of tragedies like murder or suicide, or perhaps New Yorkers are simply more jaded. But Bell seems to have seen it all. 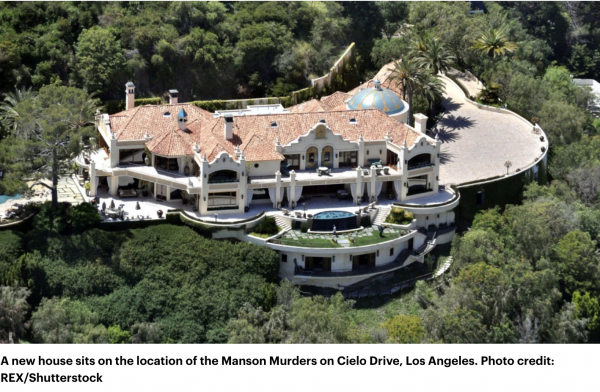 Appraiser eLearning hosted an interview with Jim Park, ASC Executive Director. Jim is one of the best friends of the appraisal industry out there because he has an appraisal background and therefore understands what is going on through the same eyes as us.

Here’s the ASC credential chart that shows the national trends: 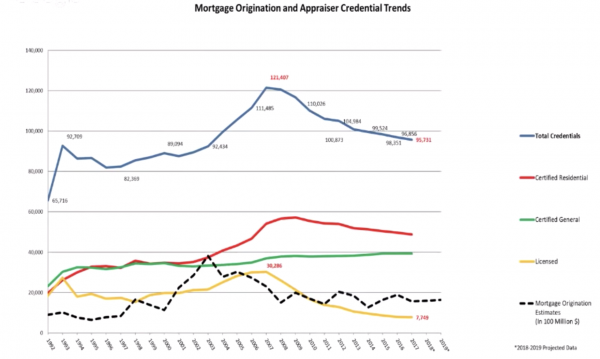 One personal question for Jim: What’s with the sword hanging over your head in the video? Is this an analogy? Ha. But seriously, good stuff and thanks for sharing your insights with the industry.

Jerry Merryman, one of the inventors of the handheld electronic calculator, has died in Dallas. He was 86 https://t.co/v6NFkosYnl