This is the first time in years I didn’t hit the slopes and I have no idea why. The lack of snow clearly wasn’t an excuse…

I’ve been the author of the expanding Elliman Report series since 1994 and our rental reports are the only versions to be published monthly. The remainder is sales reports that are quarterly and annual. Bloomberg’s article by Oshrat Carmiel that included the report only made it to the 10th most read story on their 350,000 terminals worldwide, so I’ll spare you the screenshot, LOL. But there was a chart! 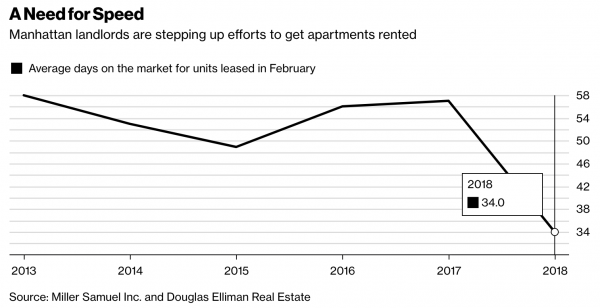 Here are some of my favorite rental market charts for February. 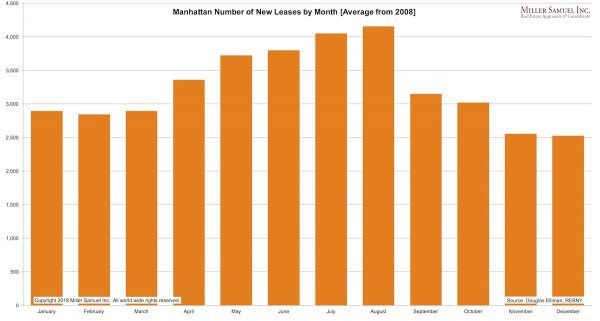 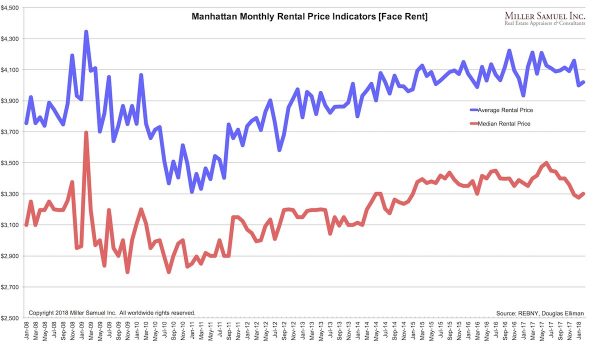 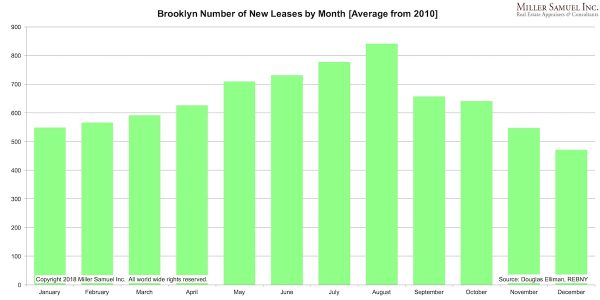 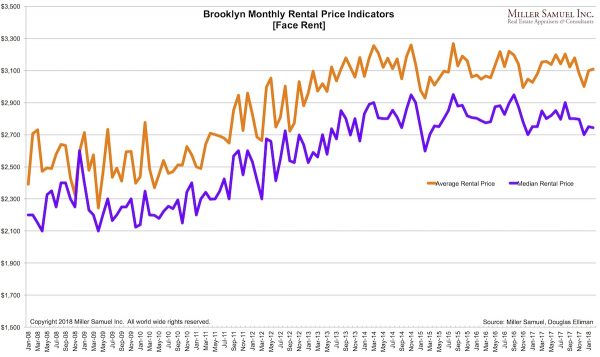 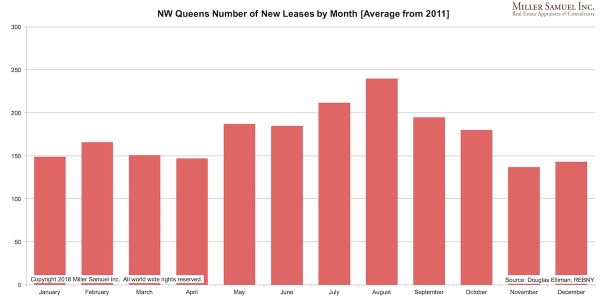 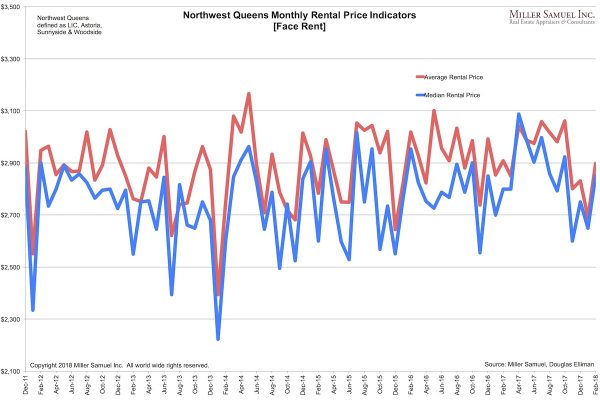 And the following chart especially – it shows how much larger the new wave of Manhattan new development rentals are. 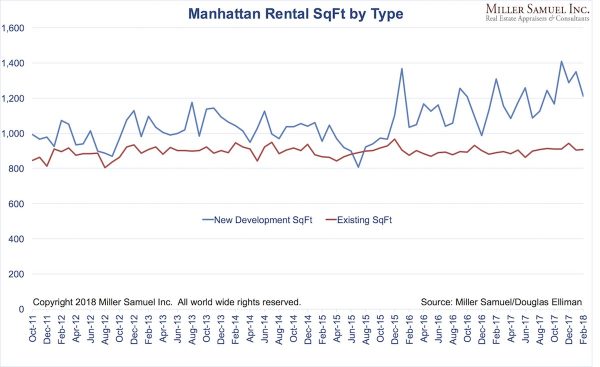 If breaking new price records in housing is your thing, Manhattan real estate is the gift that keeps on giving. EB Solomont of the Real Deal magazine broke the story that there is supposedly a $180 million contract at the condo portion of the Crown Building (730 Fifth Avenue) whose developer is a Russian Oligarch. With 12,536 square feet, that works out to $14,359 per square foot, a new record. The last record high was the 2012 $88,000,000 sale of PH20 in 15 Central Park West for $13,049 per square foot by a Russian Oligarch in the middle of a divorce. In new coverage after the 2012 sale, the record price paid seemed to be a strategy of the divorce, not the market. Nevertheless, that 2012 sale started a U.S. pattern of overpricing high-end homes and few ever sold. I dubbed the phenomenon as “aspirational pricing.” 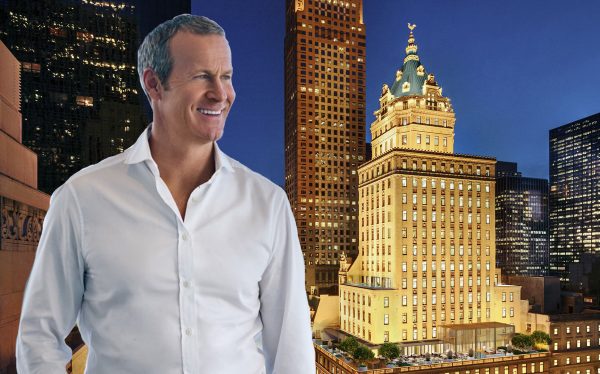 Market Reports Are Not About Glossy Covers

There was an interesting article about Donna Olshan’s market report and how other firms are competing with her now. Competition is always good for the data space as it pushes participants to constantly make their product better.

From my own perspective, pushing out about 100 market reports per year for Douglas Elliman, I don’t think many brokerage firms understand how much work goes into them. I break it down like this:

If you do not do every one of these things, then you are simply pushing out a marketing brochure.

For our New York City reports, rough 50% of our time is spent cleaning the data..the raw data quality is horrible.

There was a super cool land study done out of Rutgers that tracked land values since the 1950s “What’s Manhattan worth? A land values index from 1950 to 2014” 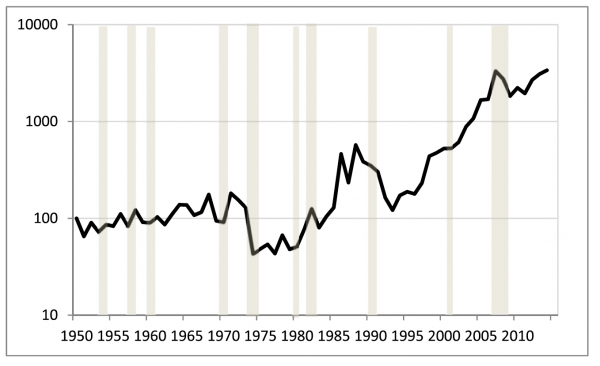 What’s Manhattan worth? A land values index from 1950 to 2014 [ScienceDirect]

You Don’t Have My Permission

I read a great article in the 1000Watt Blog by Jessica Swesey about permission marketing. Called You have my permission :

Well, I’m crying uncle here. I’m begging. Please learn the art and science of permission marketing and be diligent about it. Be patient. Give me the opportunity to truly give you permission.

When I started Housing Notes almost exactly three years ago, I placed the sign-up link on my website and started writing. Over time the readers came and to this day I have never spammed anyone. It is also why I go nearly insane when someone who unsubscribes goes the extra mile

Her article speaks to me because every day now I receive about a dozen newsletters from real estate agents, many of whom I don’t know and I have to go to the trouble of opting out. But it makes me feel guilty unsubscribe because I know they are trying hard to create awareness of their brand and I am a little flattered that they thought of me even though I doubt it.

At one point I even had a canned comment I’d paste in to explain why just to feel less guilty:

Please don’t take this personally! I get a slew of these mailing list emails from the brokerage community and it’s overwhelming my mailbox.

Please don’t take this personally! I get a slew of mailing list emails from the brokerage community. Many are interesting to read but there isn’t enough time in the day and I don’t opt-in for most of them. The newsletter as a medium is far more effective than social media so consider asking permission first to build loyalty.

But I gave up because it added even more time to unsubscribing. Those that come from firms I know, I don’t mark as spam because it can cause trouble with their host if enough people do that but still…

Jessica closes with this sage advice:

So if you’re about to open a big shiny new box of predictive analytics tools for your real estate company, please, think of the children – I mean the humans whose space you will no doubt be invading armed with this amazing data. I’m not knocking it. I’m just saying, there’s a limit to marketing tolerance.

I’ve written about the Tristar bank request many times here in Appraiserville. The first time I wrote about it, I “translated” their request letter into what I thought they were really saying. You might want to read the December 1, 2017 article: The Appraisal Waiver “Slippery Slope” Becomes A “Cliff”

Hot off the press, here is today’s The Appraisal Foundation Tristar position letter to the Jim Park at the Appraisal Subcommittee on the controversial appraisal waiver request. Tristar Bank’s request to temporarily waive appraisals is a hotly discussed topic in the industry with no one seemingly coming to Tristar Bank’s defense. John Brenan of TAF lays out the case to ASC with the following headlines and I inserted snippets of his letter I thought were most important:

To be clear, Brenan’s letter stated the following in bold: “The Foundation urges the ASC to deny TriStar’s request for a temporary waiver of appraiser certification and licensing requirements.”

If you were wondering how long startup House Canary funding would last as they try to break into a shrinking appraisal industry with new analytics and tools for appraisers, you can stop at least for now. They approached me when they started to provide product feedback. They seemed to be comprised of a lot of very nice, smart people. House Canary just won massive damages from Title Source Inc. It’s not clear whether there will be an appeal and this will be the amount paid out, it would seem to enable funding for many years.

About that name, aside: Thinking of the hit song “Canary in a Coal Mine” by the band The Police makes me shake my head at this corporate name. It makes me think of the use of canaries to detect toxic gas leaks in coal mines. Every time I hear the name, I think of appraisers risking death in a dirty, underground, misunderstood industry, yet this company couldn’t be further from that in its intent. Certainly there must be an insider joke for this name choice?

In the case Mark Blacklidge v. Kent Blacklidge, the court ruled, and the subsequent appellate court agreed, that the son needed to pay back his father $40,623.55 for fees owed in their appraisal practice. Aside from basic ethics and morality concerns, what will be son’s the reputational damage in the appraisal community and their clients?