The Most Interesting Rental Housing Market in the World

Author’s note: I made the mistake of scheduling an eye doctor appointment a year ago for early this morning. The eye drops I was given make me very sensitive to light so I wrote this Housing Note with sunglasses on making it even harder to notice my typos and grammar errors. But it is now official: even appraisers can look cool.

This was quite an interesting week, but one thing caused me to stop in my tracks. “The most interesting man in the world” is losing his gig because Dos Equis wants to target younger adults. It’s tough to be kicked to the curb when all these things are true about you:

I heard him interviewed on a comedy podcast and the following day the comedian said, “yeah, as it turns out, he’s not THAT interesting.” Here’s a youtube compilation large enough to get this marketing campaign out of your system for good.

The Most Interesting Thing About Wall Street Bonuses This Year: No Abundance of Screaming Headlines

Prior to the housing bubble and financial crisis, participants in the NYC real estate market waited eagerly for the results of Wall Street’s bonus compensation from the New York State Comptroller. After all, the securities industry is a big part of the NYC economic engine, accounting for 1 in 9 jobs directly or indirectly. The results for the 2015 year weren’t so great:

The average bonus paid in New York City’s security industry declined by 9 percent to $146,200 in 2015 as industry-wide profits declined by 10.5 percent, according to an estimate released today by New York State Comptroller Thomas P. DiNapoli.

But in the past several years, real estate reporting and discussion about bonuses are waning. Since the financial crisis, a significant regulatory overlay has been placed on Wall Street (securities industry) that is moving towards more emphasis on salary and less on bonus. Don’t get me wrong, the average size of bonuses are significantly higher than what mere mortals will ever see. The shift in emphasis seems to reduce volatility that diminishes the need for screaming headlines.

The other key point is that I think we have long over emphasized bonuses. Wall Street has been adding jobs over the past 2 years but remains below pre-crisis levels. So the headline focus on the drop in average bonus per person seems disconnected from its impact the economy and housing. There were 4,500 new Wall Street jobs in 2015. That seems more relevant to the real estate market – to have more people make a ton of money, rather than having less people making a freak-ton (my son’s expression, not mine) of money.

Here are a trifecta of charts to tell the story: 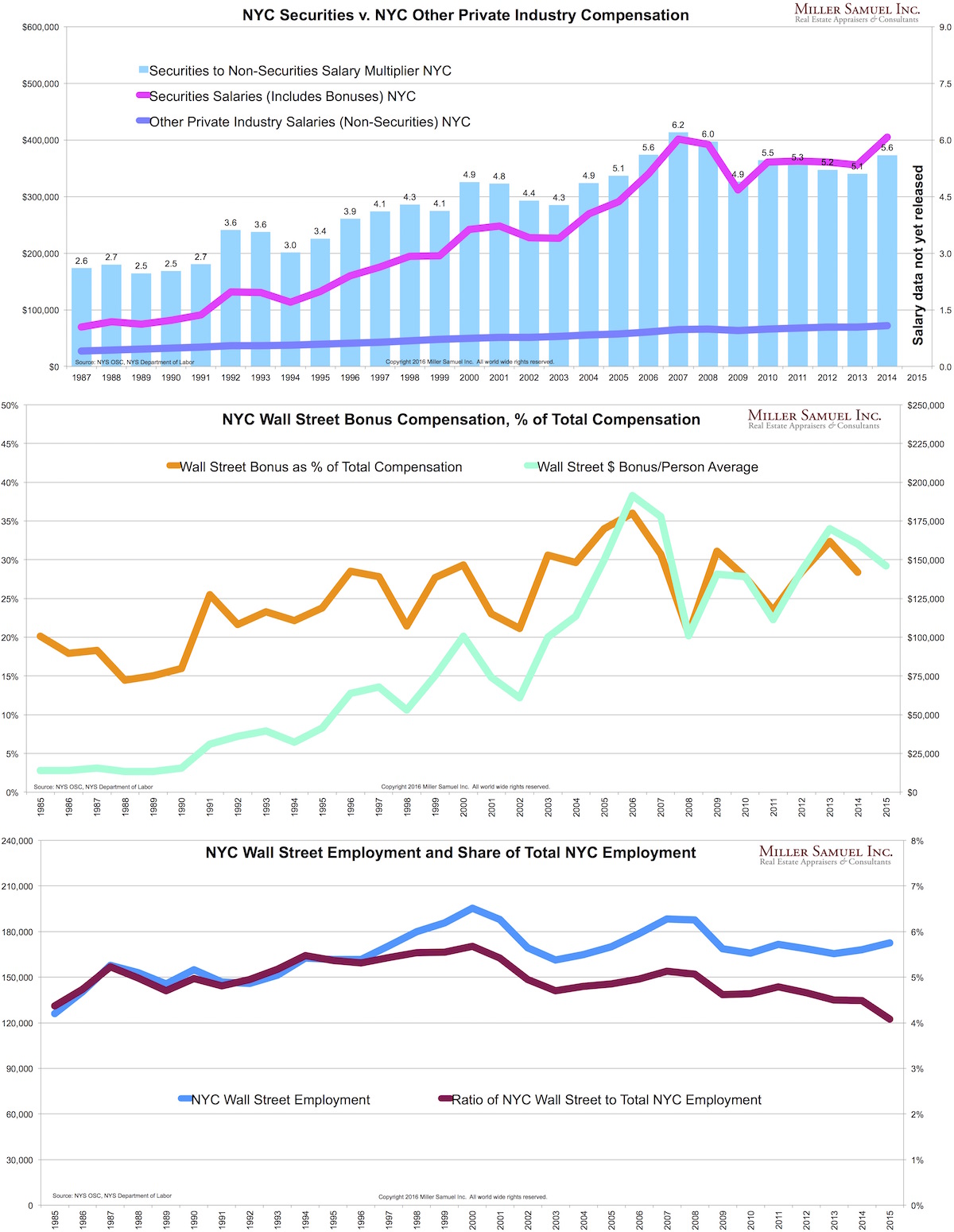 Perhaps the actual most interesting man in the world was John Gutfreund who was talked about extensively in the must-read Michael Lewis Book Liar’s Poker.

And speaking of headlines…

The Most Interesting Headline Tweak in the World: Rainbow Vomit from Silly Faces

To show the power of SEO and A/B testing, I caught this Bloomberg News headline and tweeted it because it was so crazy:

But the original headline was: – Facebook Buys Masquerade to Challenge Snapchat’s Silly Faces which only received a few hundred hits (h/t OC).

As we learned about sticks and stones growing up, word selection matters. And when it includes words like “vomit” and “rainbow” or the powerhouse “vomit rainbow” combo, all heck breaks loose.

The Most Interesting Blog in the World

Admittedly the process of writing these Housing Notes for the past year (although last week was the technical anniversary with my introductory note and this week is the actual anniversary with actual content) has poached content from my Matrix blog. However this week I wrote a couple of posts on Matrix which are included on my “Must Reads” link list. You can subscribe to Matrix as well by going to the upper right hand corner of this page to “Follow Jonathan.”

The Most Interesting ‘Median Price’ Explanation in the World

Pardon me for getting into the weeds here but over the years, many an editor reviewing a submitted article by a journalist that used my housing statistics will question median results. That’s because, for example, the annual % change of the overall market is not “in between” the % change results of the two submarkets (that comprise the whole market).

It’s no secret that I have long favored “median sales price” over “average sales price” because median sales price removes the extremely high and low sales and carves equally from each end until you get to the middle. It has plenty of flaws too but credible journalistic news outlets prefer it for the very same reason.

Here’s a scenario: I might break out a housing market as “Luxury” and “Non-Luxury” and compare them to the previous year. If I was comparing average prices, the overall market % change, might be 3%, and should be in between the luxury -3% and non-luxury +8% results. No red flags there. But when doing the same thing with median price, there is no relationship like that. That’s because in the case of median, you are only dealing with the middle number. It’s context to the rest of the numbers doesn’t get factored in, unlike average. 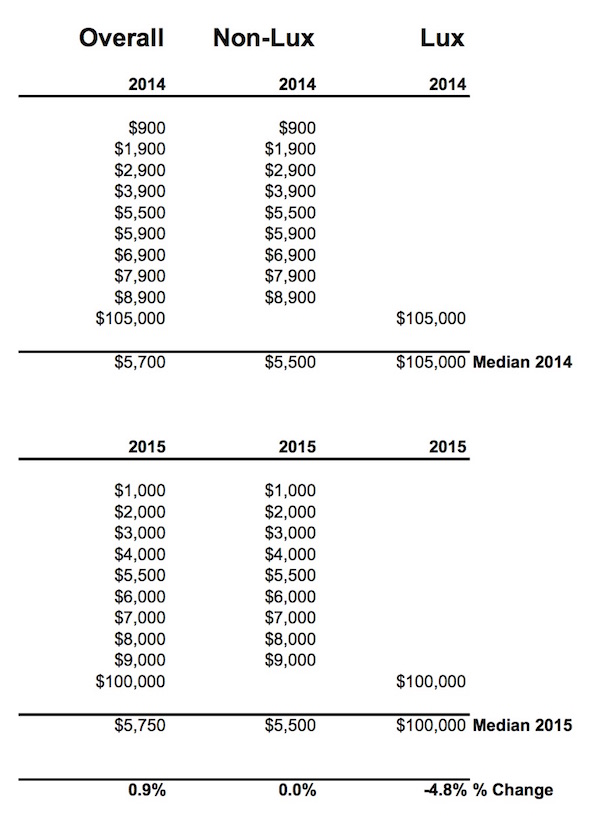 The Most Interesting Change In Luxury Assets in the World

James B. Stewart of the New York Times (and author of one of my all time favorite Wall Street tomes, Den of Thieves), pens a great piece in his New York Times Common Sense column on the change in the luxury asset market: The Assets of the Ultrarich Come Closer to Earth. It is no secret that we are seeing a cool down in the luxury housing market from the frothy conditions of a few years ago.

This was also discussed in the Alexei Barrionuevo’d great read for Curbed: New York Developers Shift Focus Away From Billionaires in Flush Condo Market

“Change” is in the air, and I’m not referring to Wall Street bonuses.

Charting the most interesting rental market in the World

MANHATTAN The two year Manhattan rental price growth streak nearly came to an end in February as the use of concessions by landlords expanded to a five and a half year high. Median rental price edged up a nominal 0.2% to $3,382 as compared to the same period a year ago. The pace of median price growth has continued to fall since August. Average rental price slipped 1.5% to $4,032 from the same period last year, skewed lower by weakness in the luxury market, accounting for the top ten percent of all rentals…

Before I insert my charts, here’s a chart made by Bloomberg News using our data. Who doesn’t love a good chart? 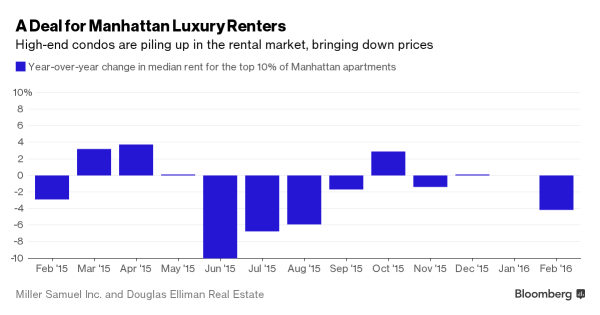 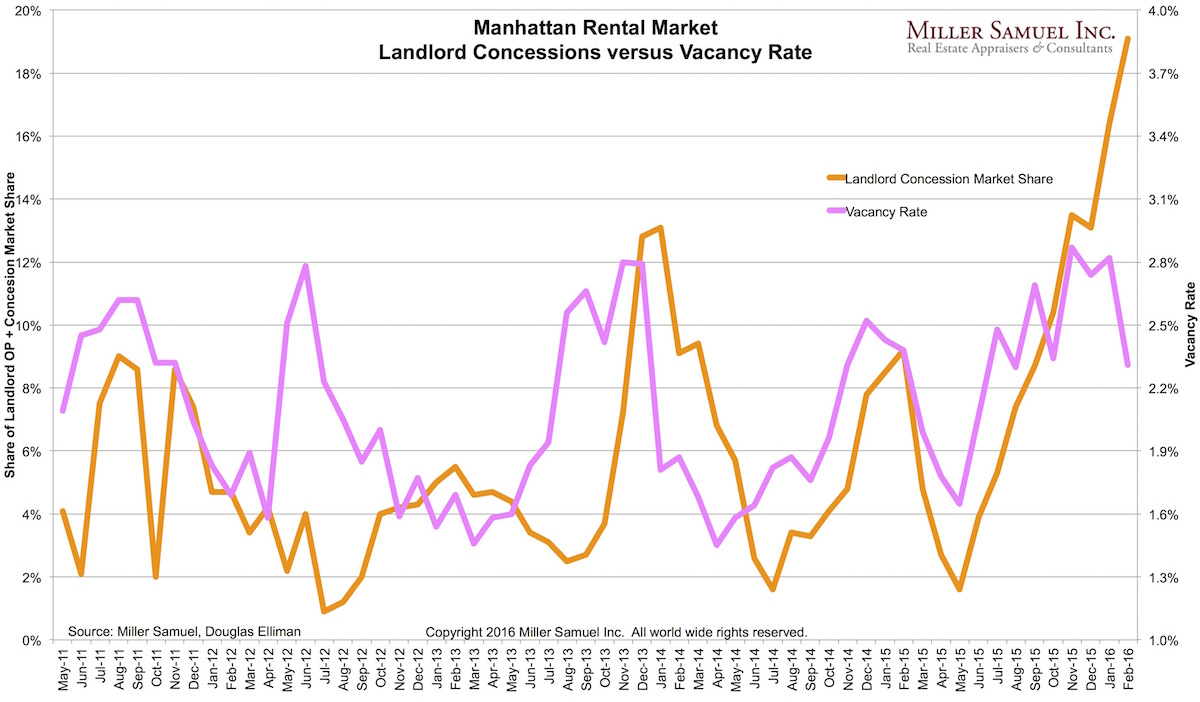 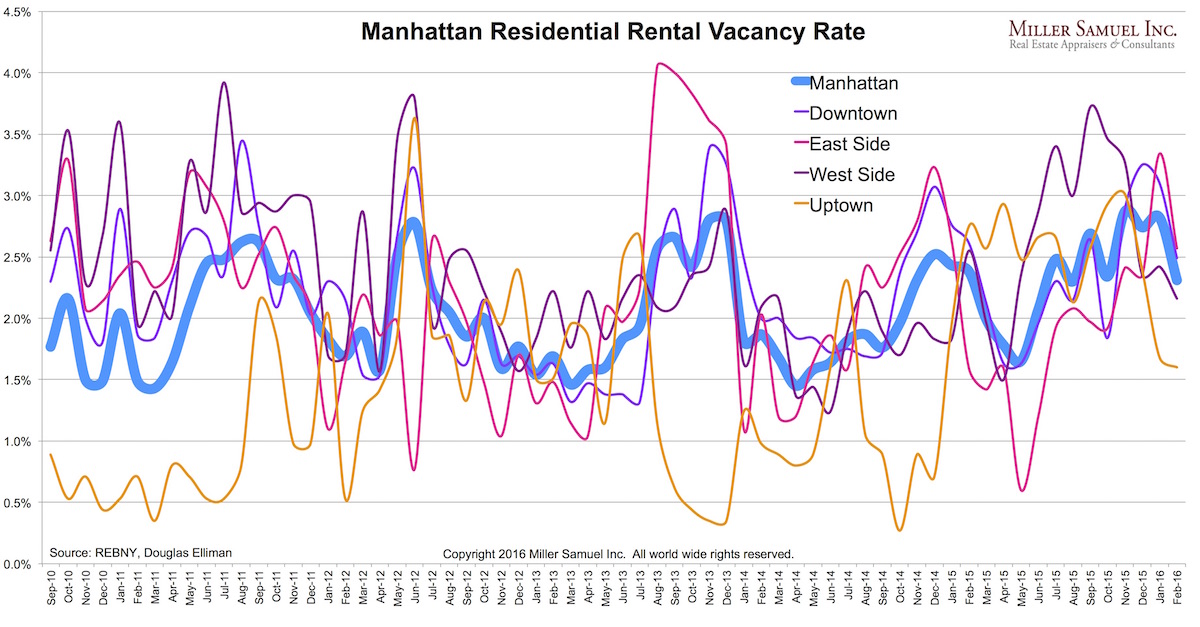 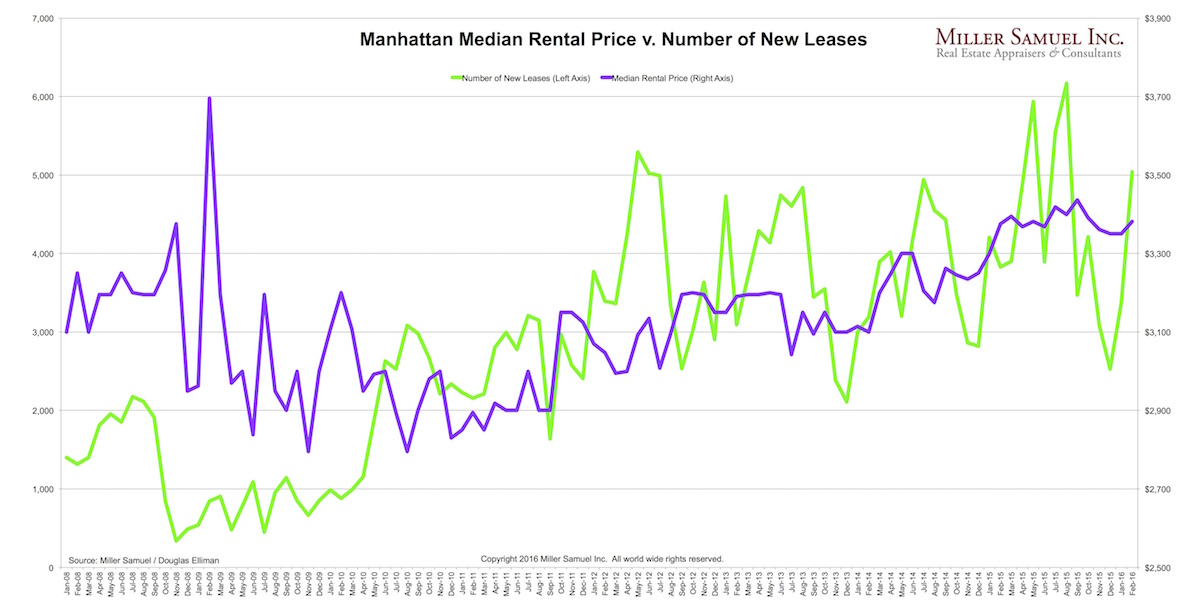 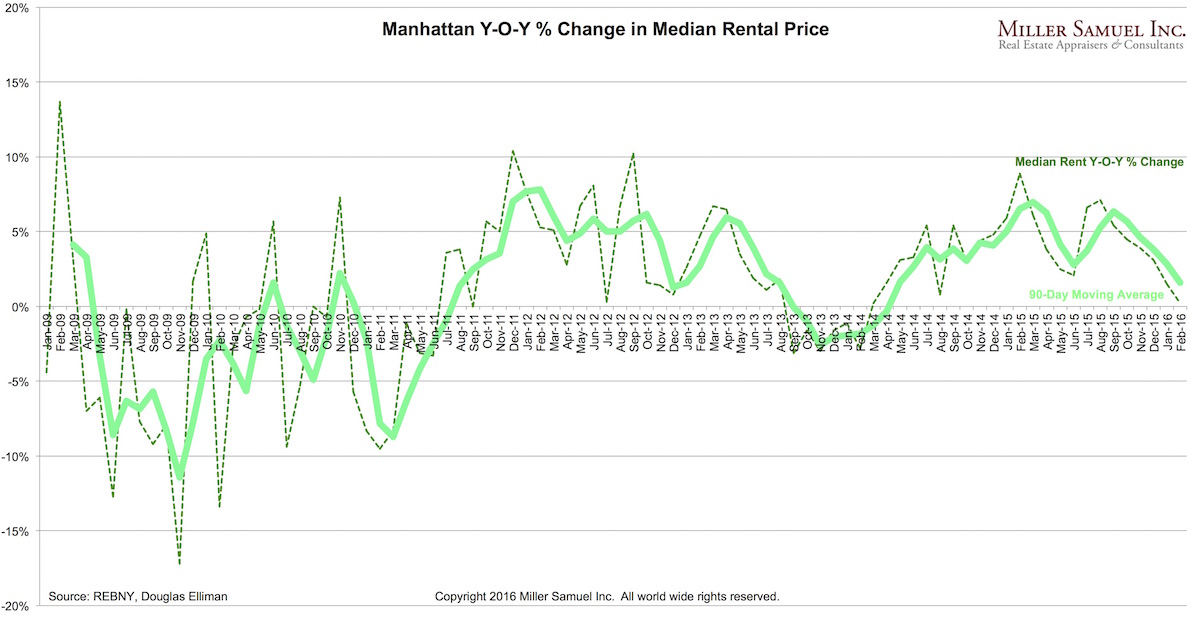 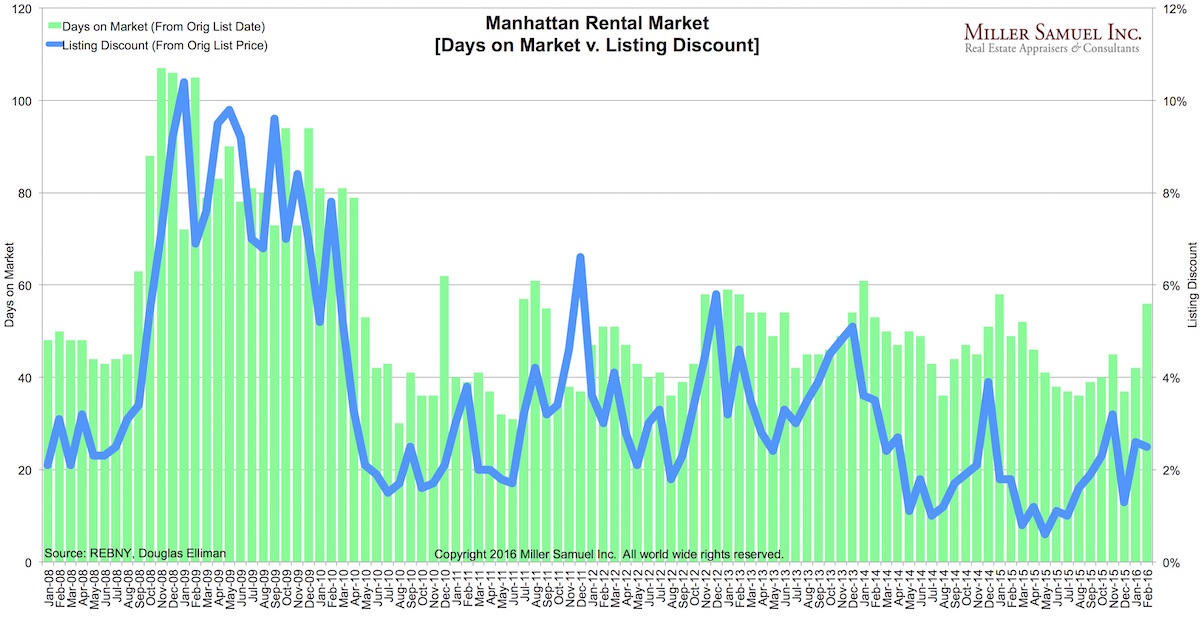 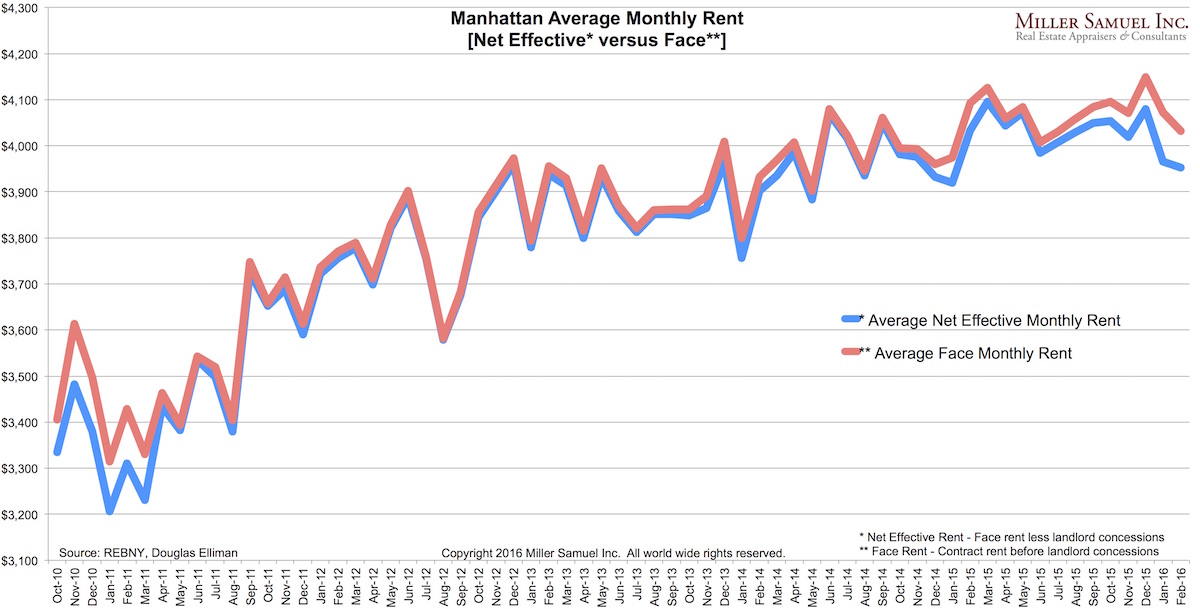 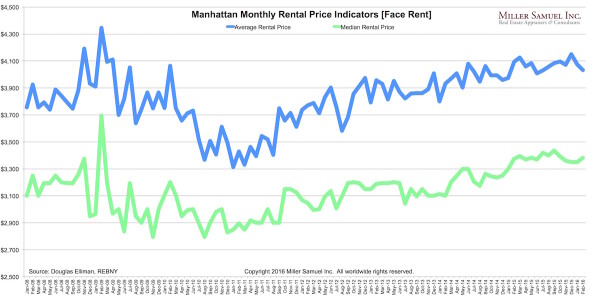 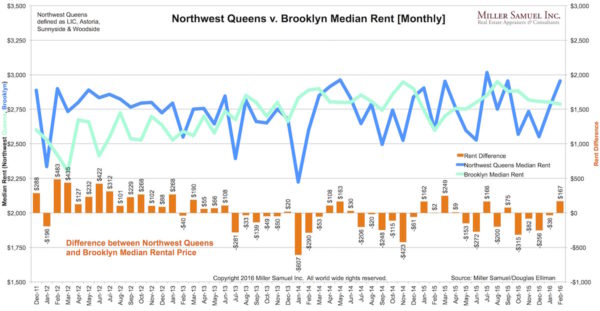 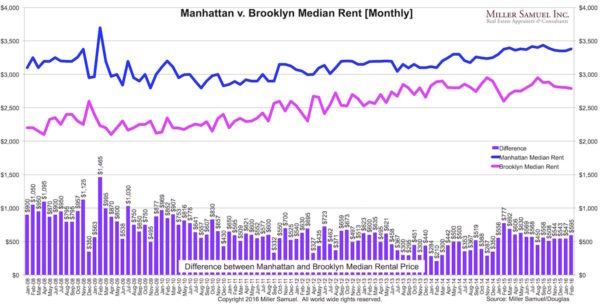 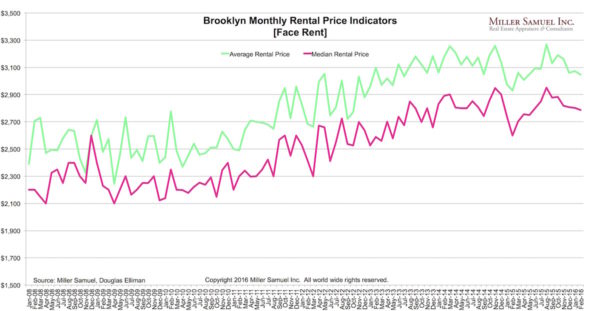 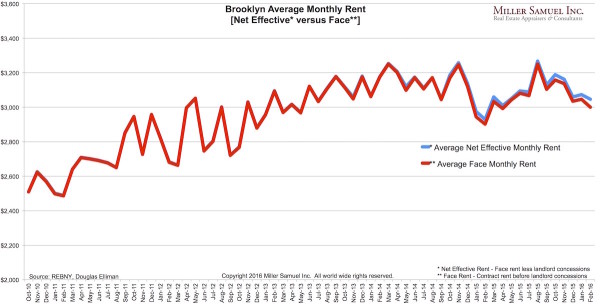 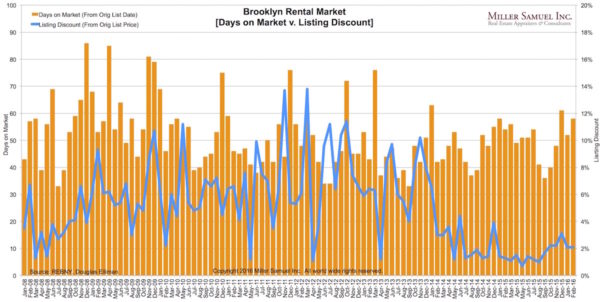 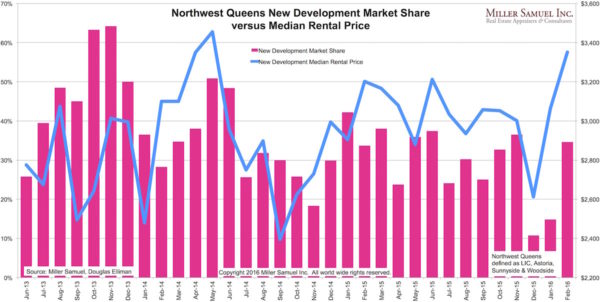 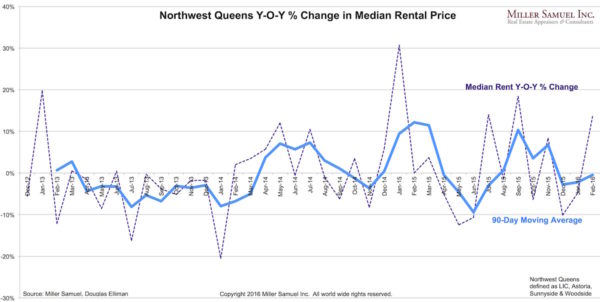 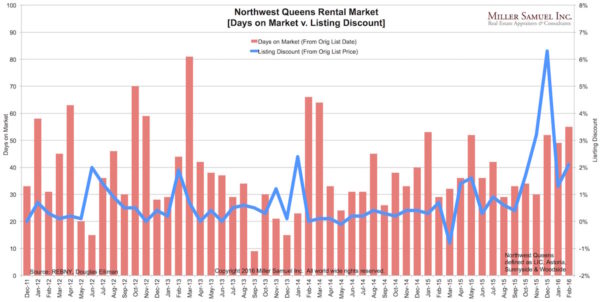 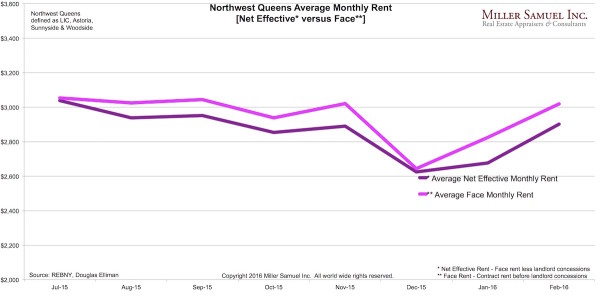 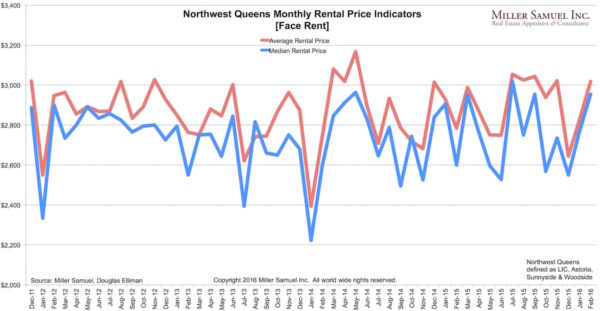 If you need something rock solid in your life (particularly on Friday afternoons), sign up for my Housing Note here. And be sure to share with a friend or colleague. They’ll feel good, you’ll feel better and I’ll stay interesting (and thirsty my friends).