Looking Through The (Zillow) Bathroom Window at McMansion Hell

Well, I crossed the street successfully and am back at here on Housing Notes. My wife and I had an amazing, long-awaited vacation in London last week you were warned in last week’s HN. Through the din of massive tea consumption and a record heat wave, I was amazed out how much the city has grown and improved since I was last there in my teens. Every block seemed to have a construction crane. Walking the streets of London made us feel like salmon swimming upstream through millennials. Residents appeared very upbeat despite the terrorist events (the last one was on our first night there). Supposedly the local economy is just about at the point where the impact of Brexit will take hold but, you’d never know it.

Why I could never have been Beatle: Crossing the actual Abbey Road. To get the right shot you need to take it from a ladder at the center of the busy intersection, plus I've never known anyone who came through the bathroom window.

Knight Frank just released their global rental index, and the results match the weakness of the high-end condo sales market. Rent growth has been straddling zero for the past couple of years which aligns with the weakness of the top of the new development condo market in New York. I provide a small sliver of research for Douglas Elliman used in this report. 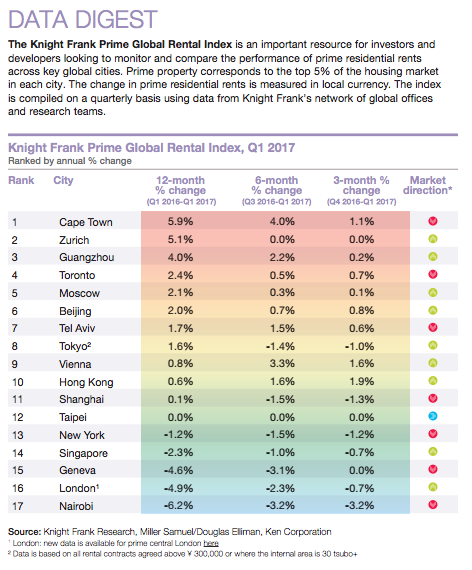 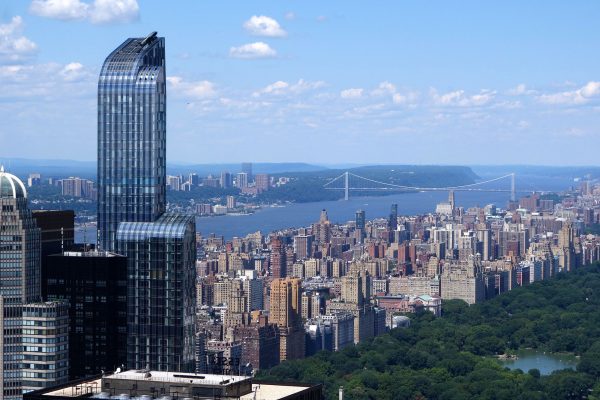 The West 57th Street corridor has provided massive media fodder for the new development housing boom as the global elite purchased 8-figure homes to sit empty. I always saw the phrase “Billionaires’ Row” as fightin’ words as to “altercation” or “quarrel.” A billionaire smackdown over who had the most expensive condos in the world.

The project first out of the ground is known as One57, and because the developer was too aggressive raising prices from lack of competition, sales nearly stalled or at the very minimum have been tepid. This gave time for all the competition to rise around them and make matters worse.

Recently, this project has received a spate of bad news. Initial re-sales selling for 20+ percent less than their original purchase – one for 33% less. and 2 very large foreclosures, the latter that showed kleptocracy in play.

And about that kleptocracy thing:

Foreclosure proceedings were started in January on Aluko’s apartment on the 79th story of One57, which would be the costliest ever residential seizure in New York City. The 6,240-square-foot (580-square-meter) condo was bought in 2014 by a shell company listed in New York City public records as One57 79 Inc., whose sole shareholder is Earnshaw Associates Ltd. Earnshaw was set up by Aluko in the British Virgin Islands, according to the Panama Papers, a trove of documents leaked in 2016 to expose offshore tax evasion, which cite him as a shareholder and beneficiary.

Here’s what I said about it in The Real Deal, in what was a terrific overview of the situation.

“You have a nearby development from the same developer with a similar price point that’s got twice the number of units,” said Jonathan Miller, CEO of appraisal firm Miller Samuel. “The first building has a lot of units to sell and Billionaires’ Row is very quiet right now. Maybe that will change. But the scale of this and the fact that it took so long to shore up financing, it’s confusing to me what the lenders are thinking. It makes no sense.”

The sad part about the red flags in this series of events is that it provides the biggest optics of the market for consumers, yet it has nothing to do with the performance of the remainder of the market which sees balanced resale inventory, modest price growth and elevated sales volume.

The symbol of the housing bubble excess might be returning. Although the reasons are different.

McMansion Hell is Definitely Back

A while back on Housing Notes I mentioned McMansion Hell, a website that pokes fun at McMansion architecture. I had discovered it while listening to one of my favorite podcasts, 99% Invisible. They received a cease and desist order from Zillow, yet they don’t own the copyrights to the photos they present. It came across as heavy-handed and the internet went into outrage mode.

Buzzfeed provides a great chronology of the issue. Other sites like The Architects Newspaper, Ars Technica and The Verge also have good reads.

The Verge offers some great advice to Zillow: “Maybe talk to people before sending the lawyers.”

Here’s a recap of some recent Zevents:

Despite all of this controversy, Zillow is doing well financially and I suspect will continue to do well. This is what disrupters do.

But consider this great insight: The Wrong Kind of Entrepreneurs Flourish in America 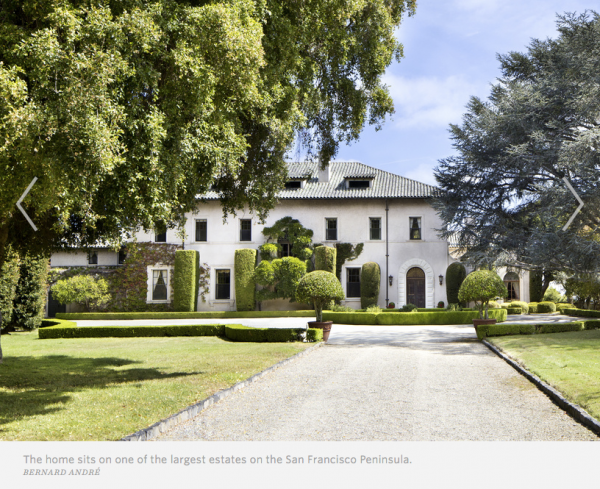 There was a wave of $100+ million listings that hit the market in 2013-2014 during the heydays of “aspirational pricing.” One just sold. but not at the original a $100 million dollar price. After a total of 70% price drops to $29.85 million, it sold for an undisclosed price (it hasn’t closed yet).

To get basic and move away from the inferences many will make on this sale, the high-end market has not declined 70% as evidenced by a four-year marketing time. It seems pretty reasonable to infer that the original list price of $100 million was never connected to reality. We see this behavior (not to such an extreme) in the slight rebound of high-end sales in NYC metro area suburban markets. The buyers were sitting around waiting for sellers to connect with actual market conditions, and that’s encouraging since sales volume determines the health of a market, not prices. 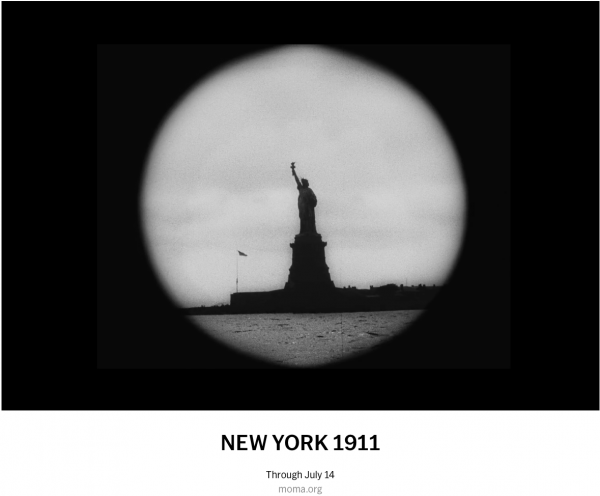 Ryan Lundquist of Sacramento Appraisal Blog has always been one of my regular reads, and the man has hobbies like making skateboards and finding small nuances in the market such as the following inspiring video:

In the appraisal industry these days, the big skateboards are more out of our control, but little victories pile up (if you missed it, this was an analogy).

Future of Mortgage Appraising is Dire

What does the future look like for appraisers, specifically mortgage appraisers, regarding automation? My theory why AI National has abandoned their residential members, aside from the recent committee to look into how to change that, is because they believe there is no future for mortgage appraisers with automation and are afraid to tell their members.

According to this latest research, appraisers, most likely mortgage appraisers, have a 90% chance of being replaced. That’s too absolute for me because automation can’t tell if the house was occupied by 57 cats, but there is very high risk for the more generic stuff (i.e., low-end AMC work).

The message from this? Specialize and upgrade your skillset to differentiate. Leverage your valuation skills into other related things. 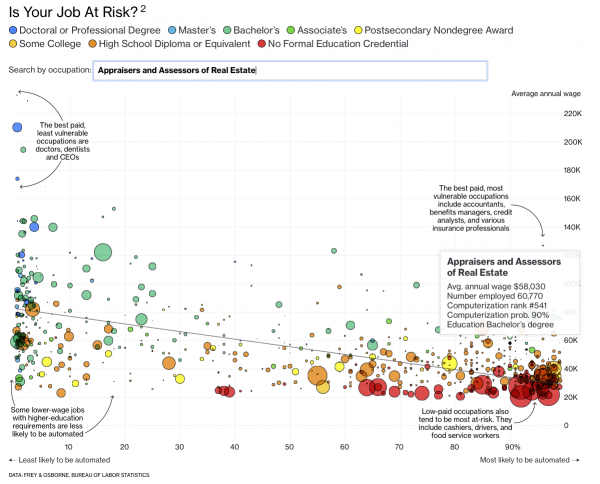 Ken Harney, noted columnist and reader of these Housing Notes (Hi Ken!) have consistently covered our industry when few journalists of his caliber would. Fannie Mae is proposing “appraisal-free” mortgage products. MBA loves it too – many of their members include AMCs. After all, mortgage lending is all about automation, and not about valuation accuracy since the U.S. taxpayer is always on standby for a bailout. Any way to streamline mortgages to make them fast is all that matters today. Scalability.

I believe Fannie’s logic is simple. They currently hold mortgage portfolios with average credit scores well above 700 because credit standards remain historically tight. That allows them to take more risk. In other words, “our portfolios are so strong that we don’t care all that much about the details of the collateral.” They’re not saying that appraisers are not needed for anything, but it is a concern since many of us have lived through the bubble and are observing the collapse in concern about quality from the AMC industry. That deterioration occurred despite the AMC industry much-touted analytics, which relies upon eroding data quality as good appraisers increasingly stay away from AMCs.

There were some great quotes inserted by appraisers Carl Schneider and Pat Turner in the piece. I’m not sure Pat realizes it, but he’s now officially famous, having appeared in The Real Deal magazine in NYC. 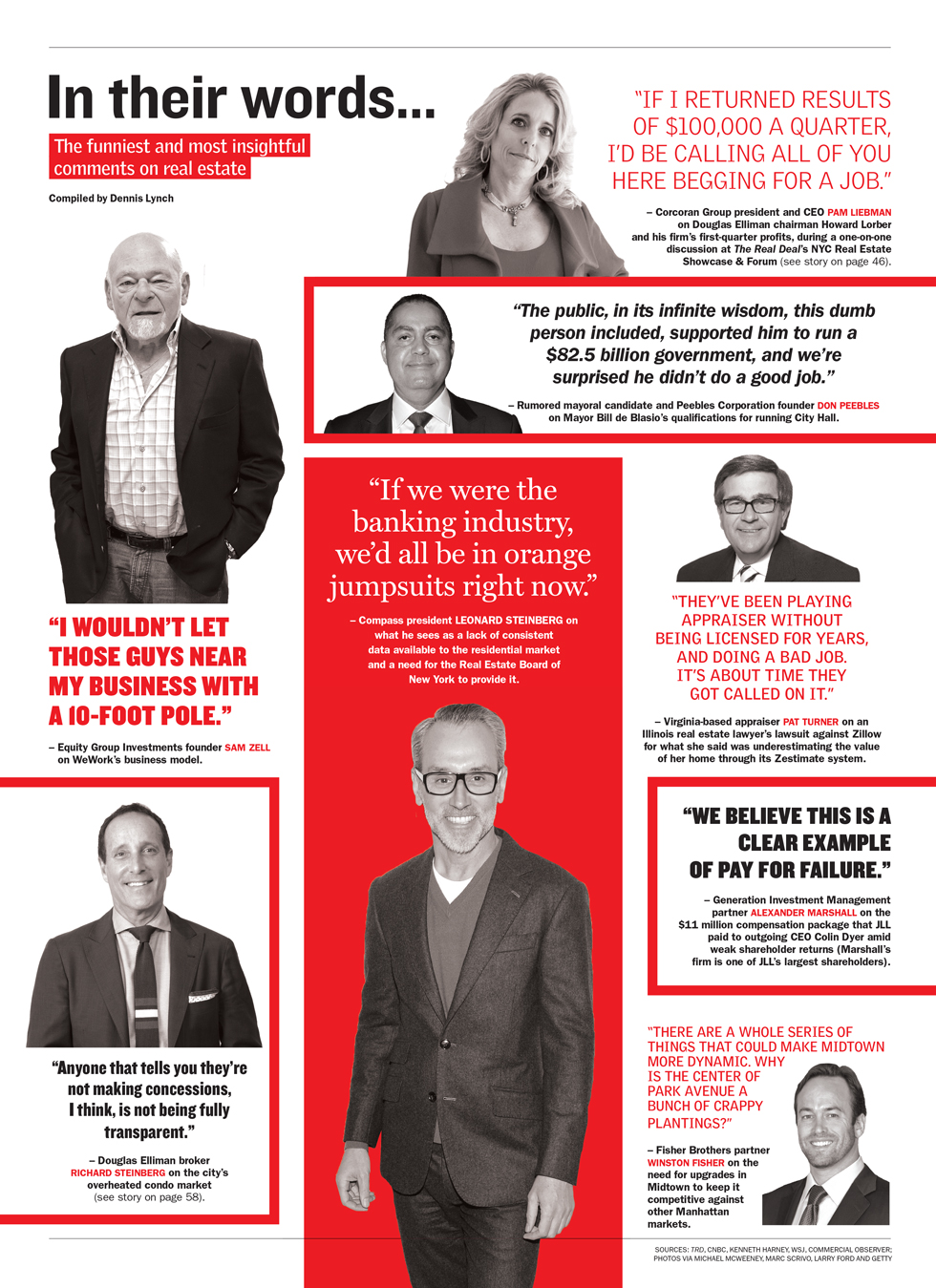 If you need something rock solid in your life (particularly on Friday afternoons) and someone forwarded this to you, or you think you already subscribed, sign up here for these weekly Housing Notes. And be sure to share with a friend or colleague if you enjoy them. They’ll hang ten on their street board, you’ll cross Abbey Road someday, and I’ll start dreaming of my next vacation.