The Most Important Word in the Housing Economy Right Now

That word says it all.

The Federal Reserve’s Beige Book was published this week. I always love reading the anecdotal take of their interviewees (and yes, admittedly, I love reading the feedback I gave them) because it can provide better context to the “now” than actual data can. This also reminds me of the over reliance on housing contract data over closed data I explored last week. Erik Schatzker of Bloomberg TV gave me the inspiration to use this descriptive word in his take on the Beige Book.

We’ve been subjected to a lot of positioning by the Fed recently about the likelihood of a rate increase. It actually feels a lot like last December when their rate increase experiment immediately failed as rates fell below levels that existed at the time of the cut. Don’t get me wrong. I would love the U.S. to be in a strong enough position to raise rates. It would mean the underpinning of the economy for homebuyers is legitimately better and would ultimately be a less distorted environment for the housing market.

This buildup in expectations combined with a disappointing results is best articulated in this video. I think I’ve watched it a dozen times, hooping and hollering by the end. This is our economic reality right now.

On Second Thought, The Rents Are Not So Damn High

It’s raining weak results in the U.S. rental market right now, at the high end that is. We’ve been seeing this in New York for several years. I charted this in my Three Cents Worth column on Curbed NY a couple of weeks ago :Why You Can No Longer Afford Your Manhattan Rent that addresses the polarizing performance of the upper and lower end of the rental market. U.S. multi-family construction has been on a tear for many years and at some point someone forgot that it is not the number of units that are being built, it’s the number of units being built at a high price point.

Oshrat Carmiel at Bloomberg News wrote two news story that went viral (#5 on the Bloomberg Terminals) about the June 1 press release from Sam Zell’s Equity Residential REIT here and here. To distill it down to my level of understanding, I am very loosely paraphrasing Zell’s time frame:

To be clear, the June 1 announcement came out a month before the usual analyst call at the end of the quarter so they must have seen a significant change (drop) in rental price trends and needed to modify guidance in advance. This is a big, big tell on the state of the rental market, especially at the high end.

Zillow came out with a rent study this week which was covered a number of articles but these were my favorite (no, not because I was cited in them). In the first:

Pat Clark of Bloomberg wrote: Rent Hikes Are Finally Slowing—Mostly for the Rich

Luxury rent gains slowed in 90% in luxury zip codes within a number of large cities. 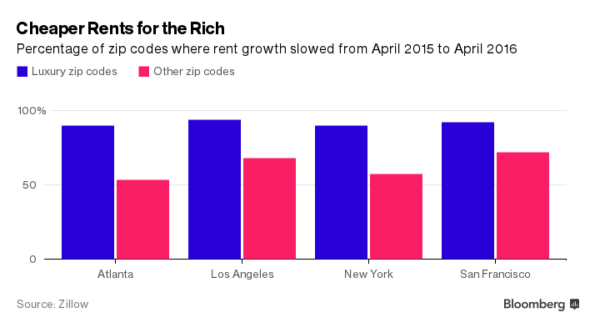 Ben Casselman of FiveThirtyEight talked about this phenomenon in his column called: The Rent Is Less Damn High. 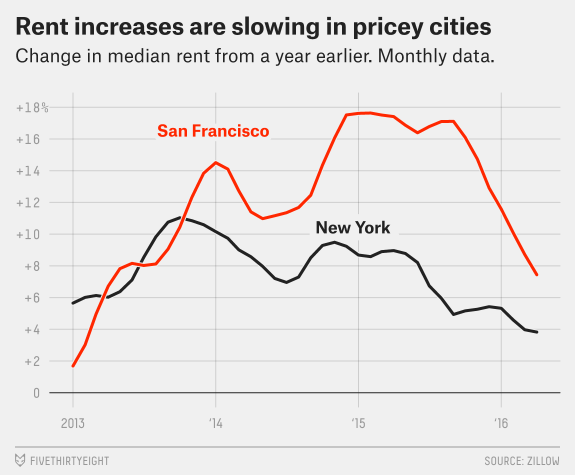 To my sensibilities, the rent versus buy decision is confusing for many in the market. It’s not a straightforward process but ultimately the goal can be achieved. Here’s how I think of it.

Since it is pretty obvious to everyone those shots were NOT edited, let me share a quick take down of all those home flipping shows and the rise of celebrity as a credible resource. My often cited because he has a lot of great insights appraiser colleague Ryan Lundquist in Sacramento pens a brilliant warning to those who attend get rich by flipping seminars that are popping up. An open letter about celebrity flipping seminars. They’re basically scamming you.

Neil Irwin pens a terrific piece in New York Times’s The Upshot: Four Not-So-Obvious Things to Consider When Deciding to Buy or Rent:

All of which are rarely discussed in the rent versus buy debate, largely because they are generally subjective concepts. But it breeds a lot of self-loathing, that somehow we have lost our nerve as a nation. With the importance the U.S. places on housing, this is easy to understand.

But no matter how bankrupt a city can be, there is always plenty of moral room to screw appraisers out of their agreed upon fees, discussions about the scourge of AMCs aside.

And while we’re talking about fuzzy things, our language is changing before our very eyes both in spelling. As of June 1, The Associated Press has changed their spelling of two things we use everyday!

Remember how electronic mail became “e-mail” and then became “email?”

Now “the web” and “internet” are lower case.

Plus, I gained a new understanding of “cash on hand” and “capital” in this great read in Foreign Policy: The Shifty Linguistics of ‘Capital’.

Oh, and has “sizable homes” replaced “McMansions” as a more PC and less derogatory term? h/t to Dan Gross who loves his small town in CT.

One last word of the week – “procrastinate” which I do each week. I collect links and ideas all week and sit down and write this Housing Note every Friday morning before it goes out at 2pm. Apparently procrastination boosts your creativity. That makes me one of THE most creative person in the world.

Let’s Talk About the Housing Market for Mere Mortals

But first, I know you’d rather talk about a $250 million home under contract and $1 million mobile homes so I’ll split the difference and talk about homes above the $100 million threshold.

There was a widely read New York Times story last weekend: A Worrisome Pileup of $100 Million Homes which reflected my views on that new market price category, which was all the rage a few years ago. Well apparently it still is because the “pileup” reference in the title became viral when in fact there was never really such a market.

“When you have a record number of homes for sale at a price point of $100 million or more, that tells you these homes aren’t selling,” said Jonathan Miller, president of Miller Samuel Inc., a real estate appraisal and research firm. “It’s not as deep a market as some might hope.”

“The era of aspirational pricing is over, and I’m not sure it ever really worked,” Mr. Miller said. “These prices get headlines, but the properties just don’t sell.”

A few years ago I started collecting sales and listings north of $50 million and came to the conclusion that only a handful ever sell worldwide. Like the $250 million sales contract in Manhattan, each of these transactions is really a one-off. Yes, there will be sales above the $100 million threshold in the future, but it is not some new market that can be cultivated, at least not yet. And most importantly, it has no linkage to the housing of mere mortals like me and presumably 100% of my Housing Note readers.

My friend Barry Ritholtz of the Big Picture blog, who leads a multi-media life over at Bloomberg had one of best reads of the week in his Bloomberg View column: Be on Guard Against Bubble Sightings. His piece was based on the reaction to that $100 million market story which went viral and how we should interpret it.

One of the key takeaways was this:

But first, lets talk about how size matters. I touched on this a bit in my recent ‘Three Cents Worth’ column for Curbed NY: Tracking the Changes In Manhattan Apartment Sizes. There was a significant drop in the average square footage of a Manhattan apartment. We’ve been talking about a significant shift in market conditions since last fall when the regional housing market became “soft at the top.” 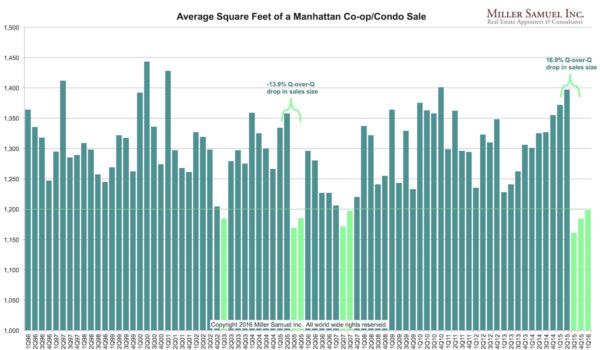 Housing at the Intersection of Jobs and Affordability

Moving on to price trends, Justin Fox over at Bloomberg View and a onetime guest of my former podcast “The Housing Helix” explores the disparity between price trends and income trends (a key reason why home affordability is dropping despite low mortgage rates).

Home prices rose at about the same pace as median incomes in the 1990s. In the early 2000s, as already noted, the two became completely disconnected. During the real estate bust the two lines came closer together, now they’re diverging again. Housing is a lot more expensive, relative to income, than it used to be. 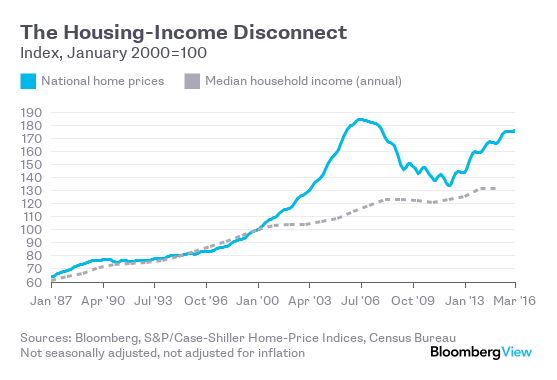 I think many observers of the housing market confuse strong price trends as an indicator of healthy housing market conditions with sales activity. As I’ve often said here on Housing Notes that never has been. I’ve always favored transaction patterns over price patterns as a better indicator.

Here’s a great NPR discussion on the housing market with three very notable housing authorities. It’s definitely worth a listen. The discussion is centered around the limited housing affordability in big cities but that is where the job growth is so they rent.

To close out this week’s note, here is something to oogle over.

New York Times magazine has created an epic interactive visualization on tall buildings. One thing to keep in mind – someone has climbed them. 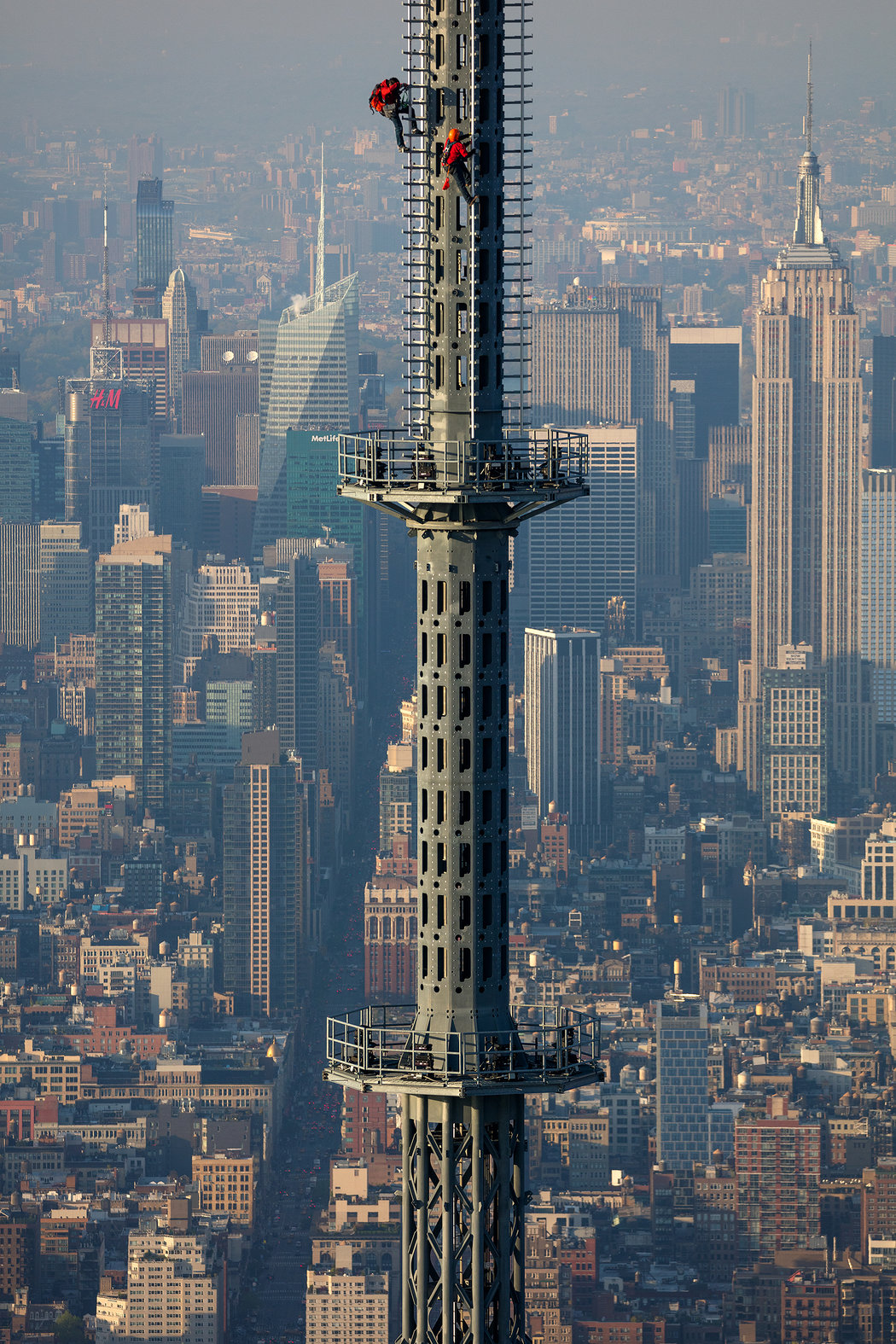 If you need something rock solid in your life (particularly on Friday afternoons), sign up for my Housing Note here. And be sure to share with a friend or colleague. They’ll feel like debating ‘rent v. buy’, you’ll feel like flipping a water bottle on stage to a live audience and I’ll procrastinate.