The good news-bad news world of real estate is best illustrated through table tennis ball handling, obviously. Echoes of the Harlem Globetrotters versus the Washington Generals…

Perhaps A Sign The U.S. Housing Market Is Taking A Breath

Showingtime provides us a seasonal 2019-2021 comparison of broker showings for their top 100 markets. The May-June dip this year suggests a combination of buyer fatigue and a lack of supply to show.

Home sales are slowing as climbing prices and a shortage of houses limit buyers. [NY Times]

Here’s a chart I updated on all sales that closed in Palm Beach back to 2004 that were at/above $50 million. Its quite astounding. 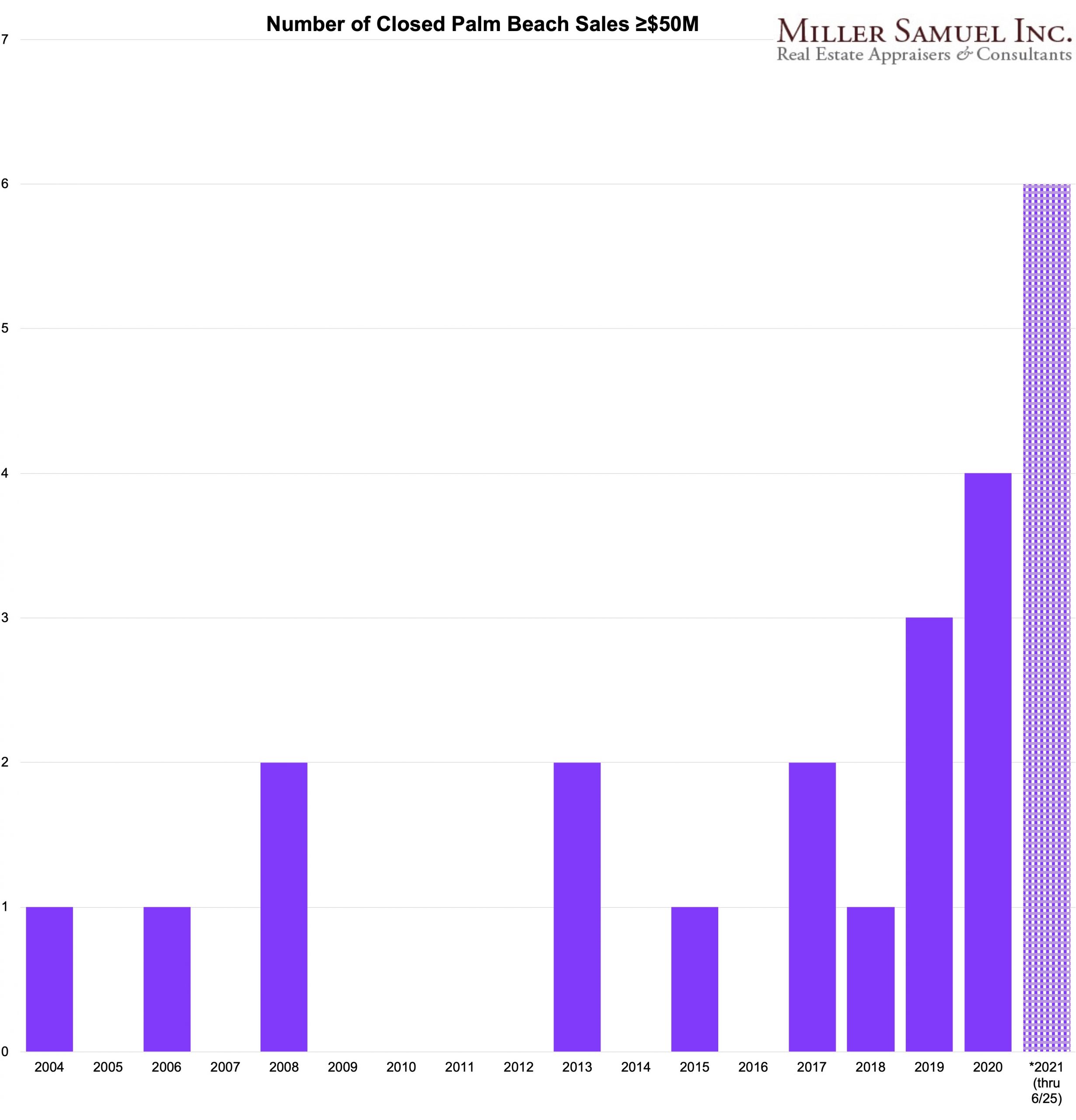 This is an amazing quote:

Michel Couillard, CRE, 2021 global chair of The Counselors of Real Estate on the release of the Top Ten Issues Affecting Real Estate –

The pandemic was a stress test, revealing vulnerabilities, appetites, and new and increased risks 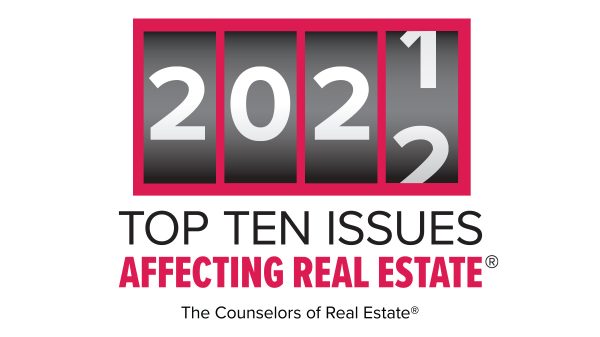 NPR interviewed a University of San Diego and a consultant to automated valuation model companies. While I agree with the premise that AVMs and manual appraisals can be less accurate in rapidly moving markets, he illustrates why the public and media don’t understand the fallacy of his accuracy argument:

He says: “AVMs do a pretty good job because they can consider not just past sales, but current listing prices, search activity and other factors like that”

Actually, they aren’t. For example, they can’t see that the house reeks of urine or that 100 feral cats lived there.

On the issue of the appraisal gap he argues: “One is that AVMs are agnostic with respect to race, ethnicity. They don’t know it. They don’t care. It’s not in the models at all. Even unconsciously, they can’t consider it. And so, there’s less likely to be any unconscious bias, as you might with an appraiser.”

This is not true – AVMs are constructed by human beings.

This is a classic example of a biased source – after all he consults for AVMs. Remember Warren Buffet’s famous quote?

Never ask a barber if you need a haircut.

At least the reporter knew better as she added what she learned a few years ago when she reported on the Zestimate:

After its recent update, Zillow said its median error rate for homes that aren’t on the market is about 7%. Meaning that half the time, the actual sale price falls within plus or minus 7% of the Zestimate. For the other half, the gap is larger.

Why Housing Prices In Japan Are Flat – Less Restrictions

For all the people on the left complaining about the vacancy rate in NYC, Tokyo has a greater proportion of vacant homes than New York, London, and Paris, but rents have only increased by 0.73% since 2000 (they have increased by 102.55% in NYC) https://t.co/iK0tjI6UsK pic.twitter.com/9zcIzipiZv 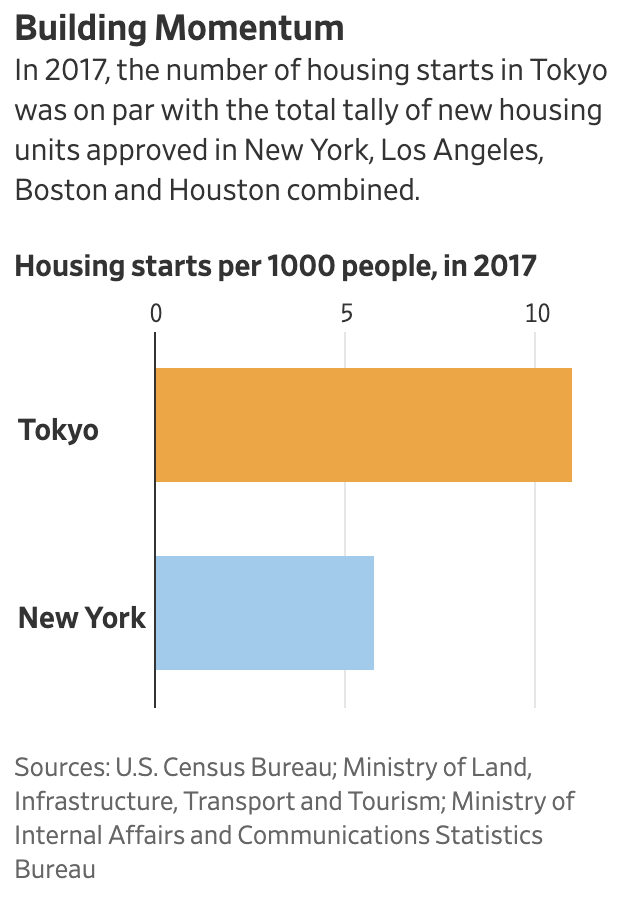 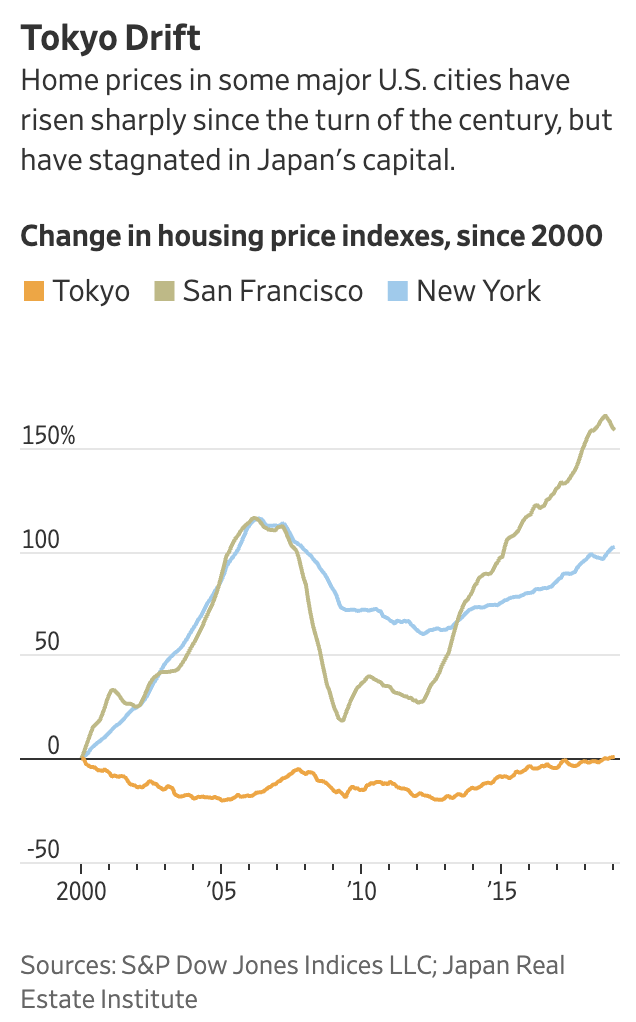 How Can A Condo Built In 1981 Collapse? It Can’t – Which Is Why This Tragedy Is So Scary

The Miami Herald and The Real Deal provided thorough coverage of the tragedy as many news outlets continue to update the story as it unfolds.

JUST IN: Video I’ve obtained of the building collapse in Surfside, Florida. pic.twitter.com/BGbRC7iSI9 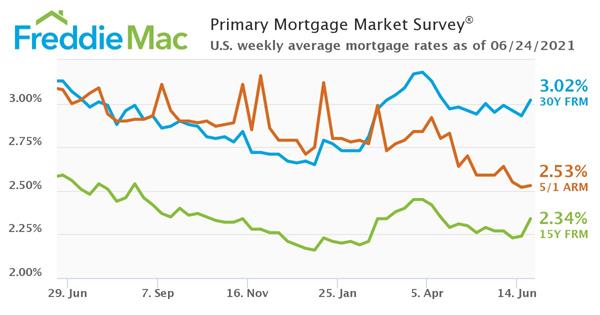 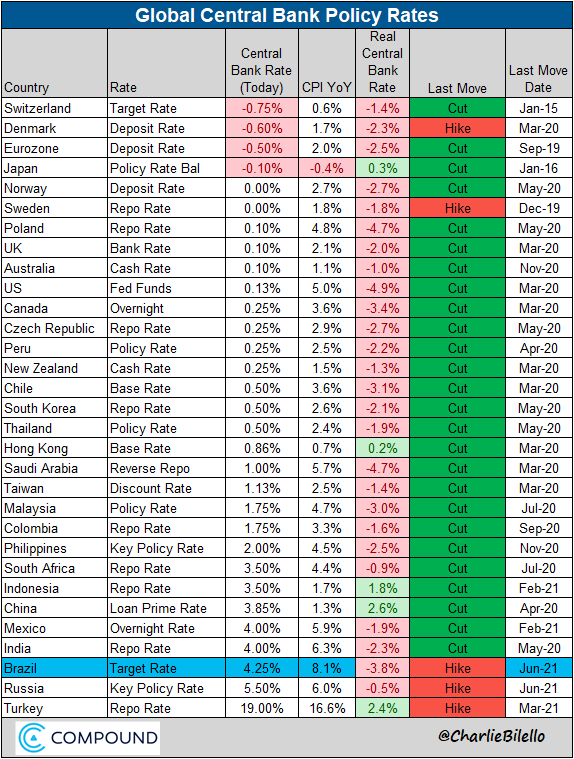 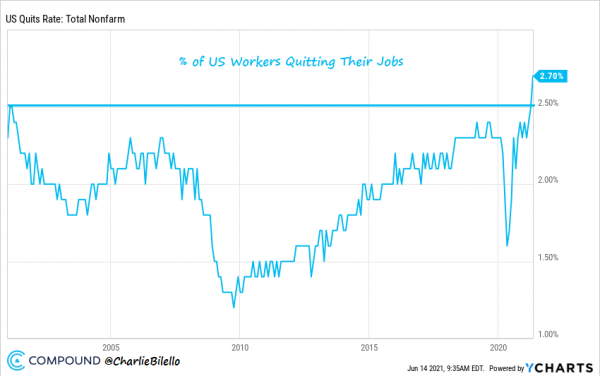 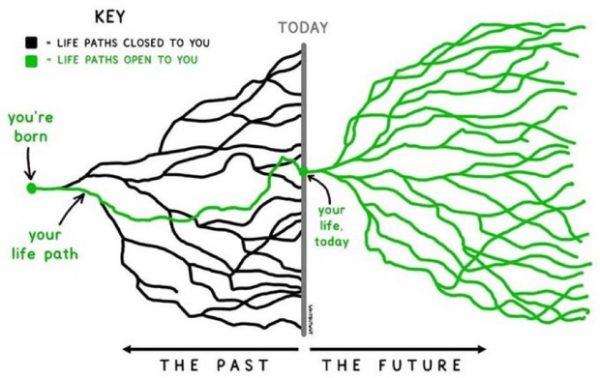 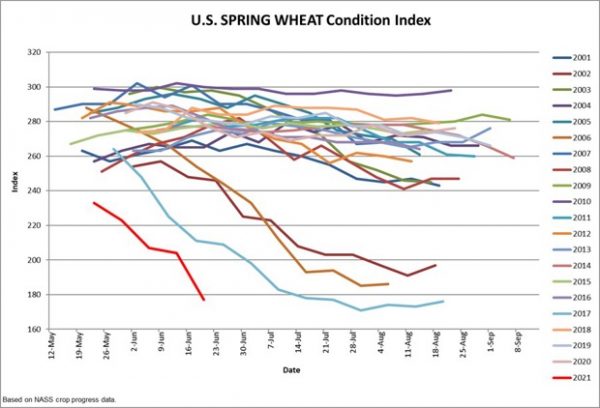 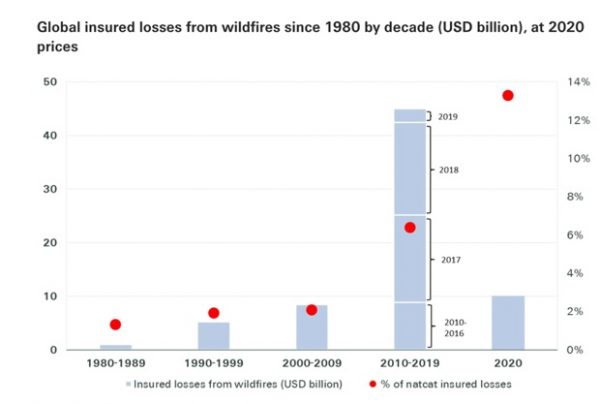 The Chair of the Appraisal Standards Board, Wayne R. Miller suddenly resigned from the ASB. Miller (no relation), the well-regarded Chief Appraiser of Bank of America has been serving on the two technical boards of the Appraisal Foundation for years.

I don’t know what the reason was for the sudden resignation – as of today, the TAF website doesn’t reflect the change. My wild guess is that Bank of America has been touting its diverse and inclusive workplace and the rising public awareness of the actions (more accurately, lack of actions) by TAF on this front haven’t been consistent with those efforts.

I’m quite surprised that more TAF volunteers haven’t left yet…the infamous bat-shit crazy letter presented by TAF to ASC should have served as a warning of a new level of crazy was underway.

Just when you thought that the FOJs (Friends of Jim Amorin, AI CEO) had learned from last year’s failed attempt to steal the nominating process and install FOJ Tankersley instead of duly vetted Craig Steinley, they are at it again.

I’ll explain why, but first, let me elaborate on the sham petition process being employed this time:

Like last year, the NNC (National Nominating Committee) vetted all the nominations from the various regions of the Appraisal Institute. The vast amount of time and energy employed in this process by 10 NNC volunteers can not be understated.

The NNC selected Steven G. Stiloski, MAI, Audit Committee Chair, who is not an FOJ. I just want to point out that he, like Craig Steinley was on the audit committee and likely why Jim Amorin and his FOJs have pushed back hard. It seems reasonable to assume audit committee members know where the financial bodies are buried, no?

The sham petition process resulted in the nomination of Sandra Adomatis, SRA, who I heard tells others she is not an FOJ. Like Michael Tankersley (who is an FOJ) last year, anyone who uses their own ambition to bypass the recommendations and vetted nominations of the membership is, by definition, an FOJ, tarnishing their reputation within the appraisal industry. After covering the FOJ phenomenon for years, the cynic in me makes me think Sandra was selected so the organization can claim both a move towards greater diversity and inclusion of a residential member. We all know that residential members have long been forgotten by FOJ AI leadership that has dominated for more than a decade. Women and minorities are significantly underrepresented.

All FOJ members on the Board of Diectors, I plan on sharing a list in the coming weeks, your position will be made transparent to your industry peers.

Last year I dubbed the FOJ maneuver to replace the NNC selection with an FOJ the “sham petition process.” FOJs have attempted to rebrand it with the less catchy “2 Candidates For 2022” but it is not going to stick.

This corrupt maneuver will forever be known as the “sham petition process” until it is removed from the bylaws or the Appraisal Institute modifies its not-for-profit status to the monarchy of Jim Amorin.

Incidentally, the Appraisal Institute has just scrubbed their website of all Chapter links and contact data and any Regional data. That makes sense given their actions to convey to members that their recommendations don’t matter. FOJs don’t want the headache of dealing with dues-paying membership. 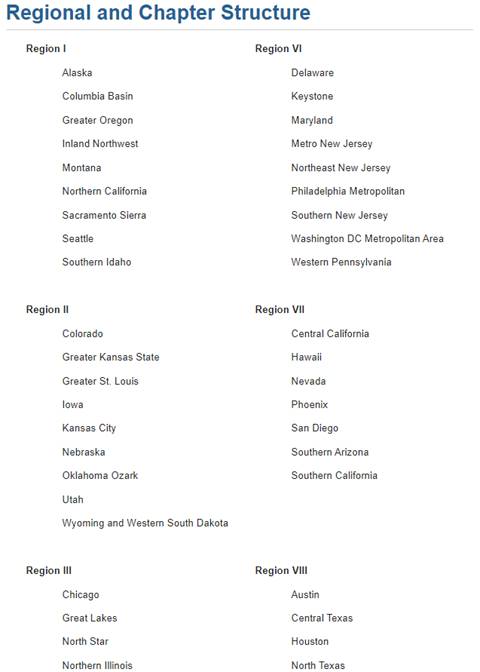 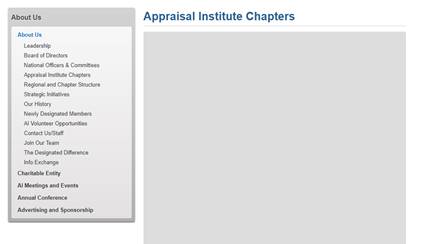 The phrase “timing is everything” seems appropriate. In the AI by-laws, users of the sham petition process have 45 days before the Board of Directors meeting to submit a candidate to compete with the vetted NNC selection. The 45-day window ended last Sunday, so FOJs waited until the weekend to submit their candidate to CEO Jim Amorin and he verified and submitted the Board of Directors on Sunday.

I believe that only members who submitted letters to recommend candidates got the following email from AI Counsel on Wednesday which clearly states what is happening. However, the membership did not get this email, which is unconscionable.

Instead, the membership got the notice on the same day but was posted in fine print at the end of a Appraiser News Online newsletter that no one reads in its entirety. They did the same thing with the announcement of the FNC stake that had been denied for years. 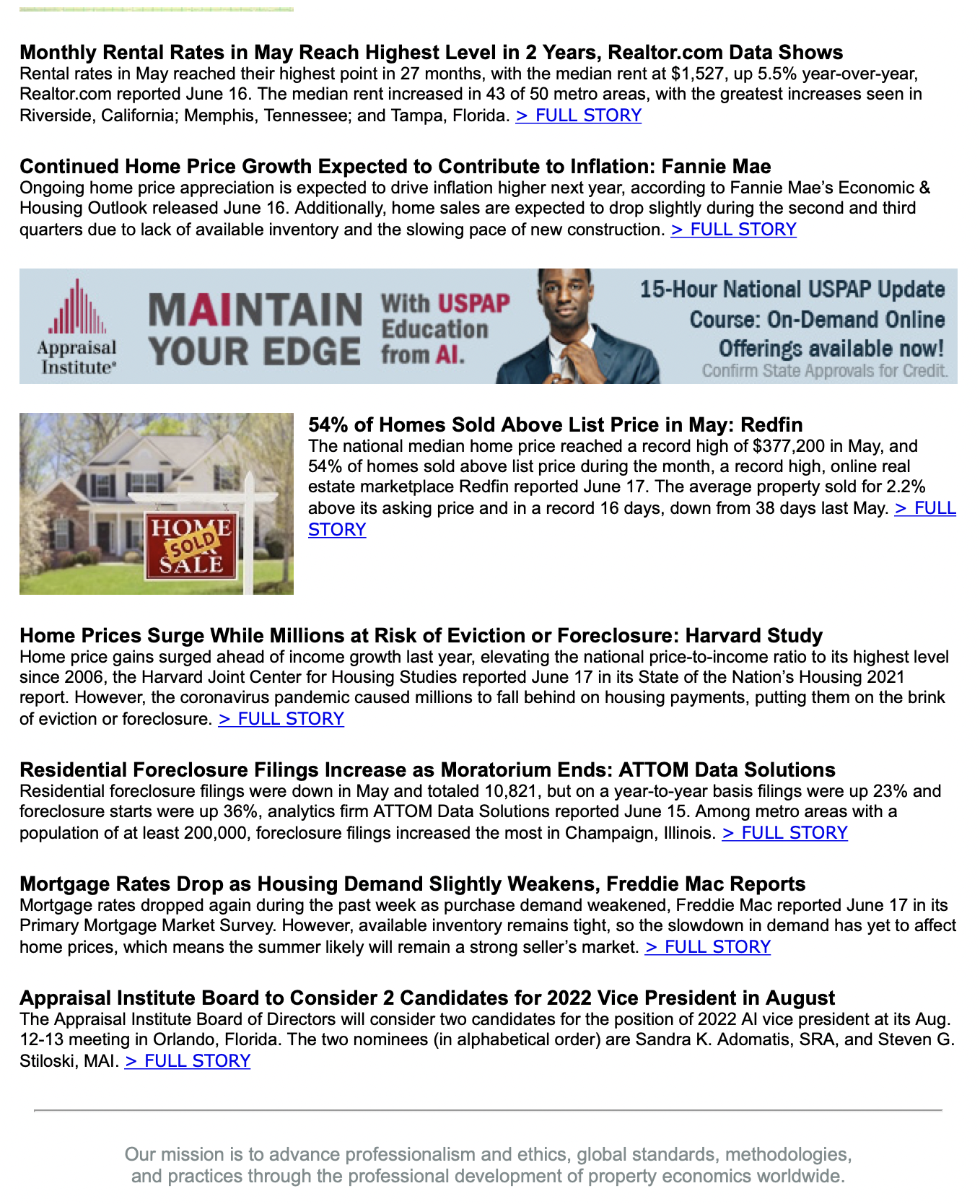 The link takes the reader to the AI web site posting from June 23rd (Wednesday):

Why This Sham Petition Process Really Matters To FOJs

The threat to Jim Amorin’s job and $500K over-the-top compensation occurs after this election because the executive committee balance changes, comprised of the following 4 people in 2022:

If Stiloski wins, Amorin’s ouster could be completed as a 2-1 vote or if someone abstains, Schley can be the tiebreaker. If Adomatis wins then Amorin is probably safe for another year.

Right now, the vast majority of Appraisal Institute members are not aware that another sham petition process is underway! This is absolutely reprehensible and unethical.

All members need to make their voices heard and stop the destruction of the Appraisal Institute. It’s worth saving for the good of our industry. Take action now.

Here is proof that accuracy does not equal reliability.

No, The Other One. Hilariously confusing but perfectly correct map of the US by @xkcd. Source: https://t.co/PJVzLnZl6b pic.twitter.com/oU27L3QVn5