Where All The Housing Markets Are Strong, All The Homes Are Good Looking, And All The Price Trends Are Above Average

In between all the post-Brexit economic news, July 4th celebrations, family wedding planning and high school graduations, I listened to the last ‘The News from Lake Wobegon‘ segment of Garrison Keillor’s “A Prairie Home Companion” radio show on NPR. He is a master storyteller and I’ve been listening to this 10-15 minute weekly segment of a fictional town in Minnesota for a few decades, about half of his tenure. He is retiring and just did his last show.

Pizza delivery guy: “Everybody I’ve delivered to has been listening to Prairie Home Companion.” It’s the Minnesota Super Bowl.

Telling the housing story in the proper context

I admit this is a pretty lame segue into this Housing Note but what I admire about Keillor is his ability to tell a story in such a full and compelling way. During the past 22 years of writing and describing the state of the housing market, I’ve tried to do the same in my own way. But I navigate the non-fictional world of story telling, providing what I believe is the proper context to the housing market (sadly the embedded hyperbole is chock full of fiction) – speaking as if you and I were in the Lake Wobegon’s Chatterbox Cafe talking about the market over coffee and donuts. In many of my presentations to the brokerage community, when advising them about the market or providing the rationale to tell a homeowner why their home is not worth what they want it to be, I always implore the agents to “tell the story” – as if they were sitting with a friend discussing it over a cup of coffee. You really don’t want your listeners or readers to feel compelled to buy one of these.

A real and pervasive human tendency to overestimate one’s achievements and capabilities in relation to others.

What does a “better deal” mean in the context of housing prices?

I present the Manhattan, Brooklyn & Queens rental markets in the next section, but wanted to make a point first. In Brooklyn, where rental prices are rising across all apartment sizes or Manhattan, where they are not – the amount of concessions offered by landlords has more than doubled over the past year. In fact Manhattan landlords saw more more tenant pushback in June than in any June in the 5 years I’ve been tracking concessions. Tenants are seeking better deals and as a result the number of new leases in Manhattan surged 33.5% year over year. Here’s a chart from Bloomberg on our numbers: 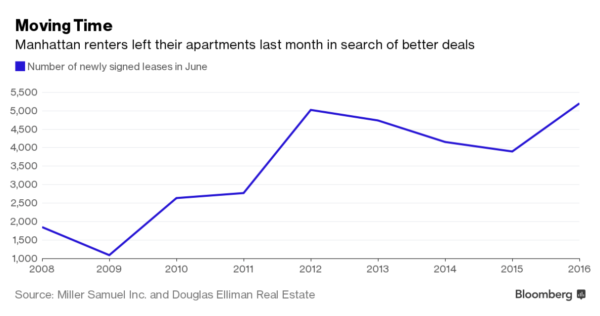 Part of the increase was attributable to the addition of new development but a larger part had to do with tenants reaching some sort of “affordability threshold” I’ve discussed here before. In fact the suburban market reports we released this week showed a surge in number of sales year over year. This was the result of rising rent and price pressures in the city pushing many city renters into suburban homeownership. Look at the jump in the numbers below. This heavy sales volume pattern began last fall.

This search for “better deals” is explained here in the most concise way possible as only a Twitter conversation would enable: 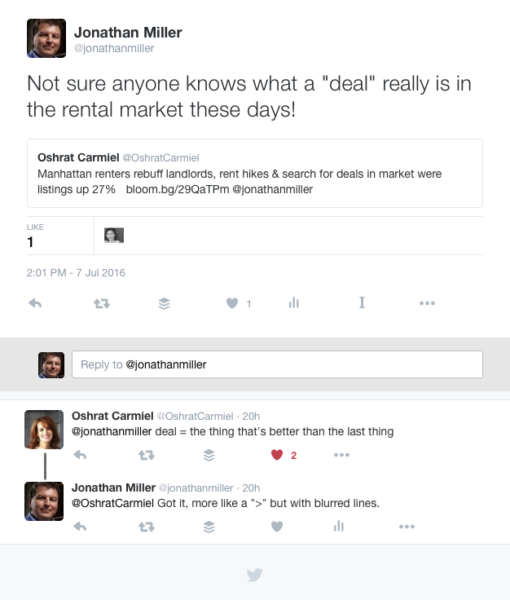 Real estate firm Douglas Elliman published a slew of market reports this week I author as part of a 22 year report series effort. I covered a lot of the NYC metro area this week. Next week we publish 5 markets in South Florida. The following week – which will be the last of the 2nd quarter gauntlet – we release LA, Aspen, Hamptons, North Fork, Greenwich and Fairfield County, CT. Fun!

Elliman Report: Manhattan, Brooklyn & Queens Rentals 6-2016
MANHATTAN RENTALS After the decline in median rental price last March that followed two years of annual increases, the metric has shown modest gains during the three subsequent months. Median rental price rose 2.2% to $3,444 from the same period a year ago, the second highest monthly median rent in at least 8 years. After considering rent concessions, the net effective median rent was $3.413, up 1.9% from the prior year… 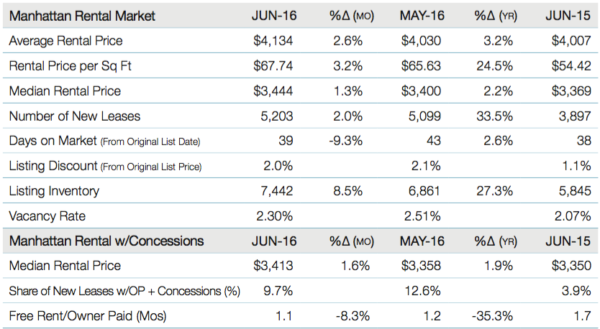 BROOKLYN RENTALS For the sixth consecutive month, Brooklyn median rent moved higher. Median rental price was $2,880, up 2.9% from the same period a year ago. Average rental price showed a similar pattern, rising 4% to $3,218 over the same period. Luxury median rental price, representing the top 10% of the Brooklyn market, increased 6.8% to $5,729, outpacing the increase in the overall market. The luxury market threshold began at $4,700 during June. The number of new leases jumped 21.2% to 1,063 while inventory surged 33.4% respectively from the same month last year…

QUEENS (NW) RENTALS Rents continued to rise in Northwest Queens, which includes the neighborhoods of Long Island City, Astoria, Sunnyside and Woodside. Median rental price was $2,787, up 10.2% from the same month last year. Average rental price moved 7.6% higher to $2,957 over the same period. The 1-bedroom market was the most active with the largest gain in market share and rise in median sales price. The market share of new 1-bedroom leases grew 10.1% to 56.1% and the median rental price of 1-bedrooms jumped 31.1% to $2,986 respectively from the same month a year ago…

Elliman Report: Brooklyn Sales 2Q 2016 Brooklyn housing prices moved higher with expanding sales and declining inventory. Median sales price increased 8.9% to $659,000 from the prior year quarter, a 15-quarter trend that began in the fourth quarter of 2012. Average sales price followed the same pattern, rising 3.6% to $816,827 over the same period. The median sales price for condos up 10.6% to $773,926, coops up 20% to $390,043, and 1-3 family houses up 2.9% to $700,000 respectively over the same period. For much of the market, prices continue to move higher due to constrained supply and higher demand. Simply put, the Brooklyn housing market has remained on a tear – along with its global brand – that began more than 5 years ago…

Elliman Report: Queens Sales 2Q 2016 After last quarter’s slow start to the year, Queens housing prices and sales moved higher in the spring market. The number of sales rose 2.8% over the prior year quarter and showed the fourth year-over-year increase in five quarters. Contract volume was more robust, up 6.8% over the same period. Listing inventory fell 14.5% to 4,403 over the same period. With more demand and less supply, the pace of the market moved faster. The absorption rate, the number of months to sell all inventory at the current rate of sales, fell to 5.1 months from 6.1 months in the year ago quarter. The second quarter pace of the market was 49% faster than the decade average of 10 months…

Elliman Report: Westchester Sales 2Q 2016 The Westchester county housing market experienced the second most sales activity for a second quarter in a decade. The market continued to benefit from the influx of New York City homebuyers challenged by several years of rising sales and rental prices. The number of countywide sales increased 11.5% to 2,241 compared to the prior quarter a year ago. The total number of contracts jumped 9.2% and the number of new contracts rose 9.4% respectively from the year ago quarter…

Elliman Report: Putnam & Dutchess Sales 2Q 2016
PUTNAM SALES Putnam county sales activity continued to surge above year ago levels. Sales levels have been up sharply since the third quarter of 2015. There were 269 sales in the second quarter, up 36.5% from the prior year quarter and the most second quarter sales in a decade. Of those sales, 87% were single family and 13% were condos. Total contract volume is up 24% to 315 and new contract volume is up 24.5% to 259 respectively over the same period. As a result of heavy sales volume, listing inventory fell. There were 832 listings in the second quarter, down 20.6% from the same period last year…

DUTCHESS SALES The number of Dutchess sales continued to surge over prior year levels. There were 246 sales in the second quarter, up 26.8% from the same quarter last year. Of those sales, 92.3% were single family and 7.7% were condos. Listing inventory fell 9.2% to 873 over the same period. As a result of rising sales and falling inventory, the pace of the market was faster. The absorption rate, the number of months to sell all inventory at the current rate of sales, was 10.6 months down sharply from 14.9 months in the year ago period…

Here are a handful of my charts that speak to several of the markets above. I’m furiously updating a bunch more in my chart gallery. So many charts. So little time. Click on each to expand. 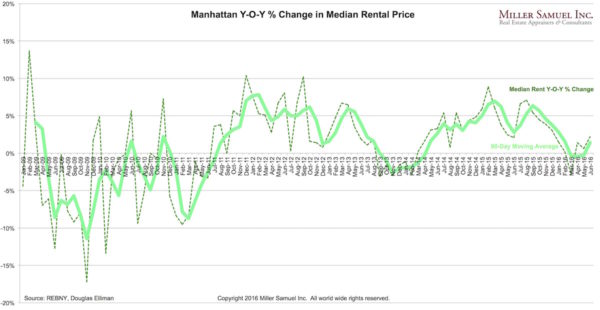 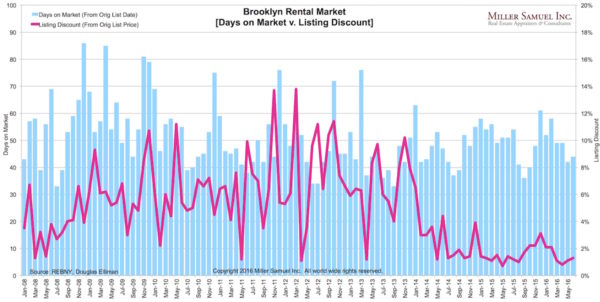 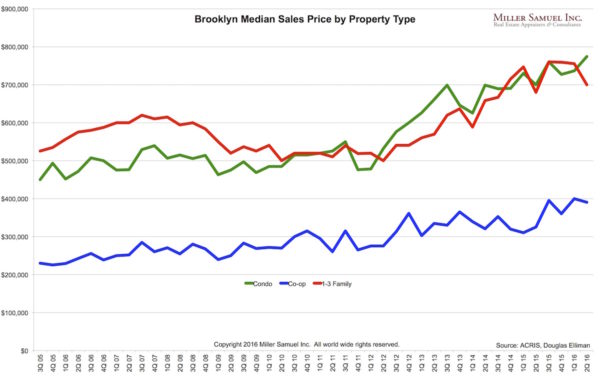 If you need something rock solid in your life (particularly on Friday afternoons) and someone forwarded this to you, sign up here for these weekly Housing Notes. And be sure to share with a friend or colleague if you enjoy them. They’ll feel like telling a good story, you’ll get a better deal and I’ll waste paper towels.

Reads, Listens and Viewings I Enjoyed this Week