What’s been so startling about the popularity of living in U.S. cities today is how far it has come. In 1985 my wife and I moved to Manhattan from Chicago. After staying in Manhattan while attending a relative’s wedding in Long Island, it was love at first sight (NYC, I mean. I already loved my wife at the time. I mean I did and I still do and am still married to her. I mean, ok never mind).

I loved the 3G’s the city offered: grit, grime and graffiti. In fact, my optimal city apartment would be a large beautiful loft (inside) but covered in graffiti on the outside, the way it was in the 1980s when I moved here. Today graffiti is being landmarked. 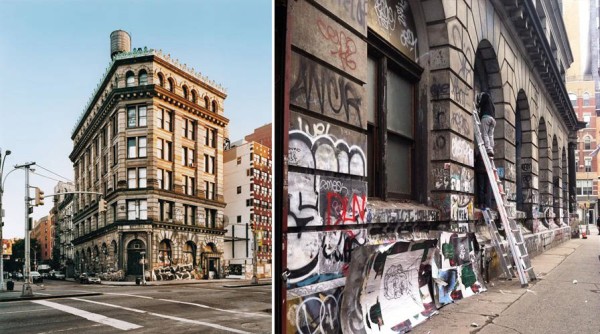 I love the contrast. Like a middle aged guy cranking AC/DC in his new Chevy Suburban with the kids strapped into car seats in the back (been there). Contrast. After growing up and living in the suburbs all our lives, urban life was suddenly very appealing.

This short video, circa 1981 gives you a sense of the city experience when we moved here.

Now that the NYC is relatively cleaned up and gentrification is in full swing, I still remain a big fan.

But housing is also getting a lot more expensive. And with that greater expense comes more creative thinking about living space. The city has championed “micro apartments” for new housing but with the existing housing stock, the concept of “tweeners” has become one of the solutions. Here’s a good New York Times piece on the “tweeners” phenomenon.

The “End of the Suburbs” Myth

It is a myth that “everyone’s moving to cities” and the suburbs are over. Especially now as housing prices are rising more rapidly in cities as they struggle to create new affordable housing stock. With the myriad of restrictive zoning and public policy agenda that have amassed over the decades, the addition of new affordable housing stock to the city has been very slow, lagging behind population growth. 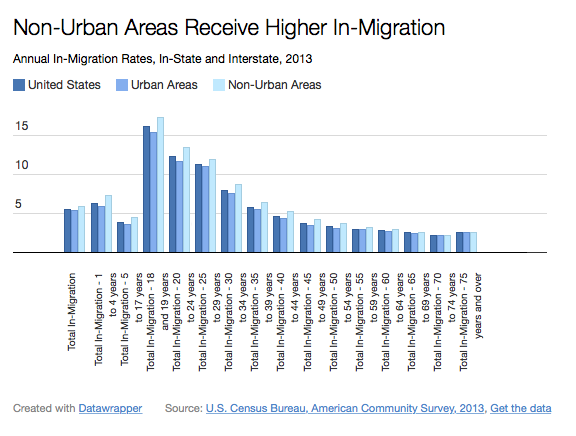 My Way or the Highway

Remember that Chevy Suburban analogy earlier? Politico has a great read about the the U.S. interstate highway system:

Today, with the urban highways of the Eisenhower era nearing the end of their useful lives, cities and state transportation leaders face a choice: Rebuild their highway segments at great expense, or tear them down and replace them with surface streets.

The highway system accelerated the growth of the country, but it also brought damage to cities. What do we do about it now?

We authored a slew of housing research this week that was published by real estate firm Douglas Elliman covering seven different housing markets, from Los Angeles to The Hamptons. Here’s a quick recap with links to each of the recent reports:

Hamptons Housing market conditions in the Hamptons fell short of the torrid pace set over the previous year. Housing prices were mixed, while the number of sales declined and listing inventory edged higher. Median sales price declined 6.5% to $849,000, while average sales price rose 2.5% to $1,577,944 respectively from the prior year quarter. Year-to-date, the median sales price has been essentially unchanged from the prior year quarter, slipping a nominal 0.4% to $866,500… 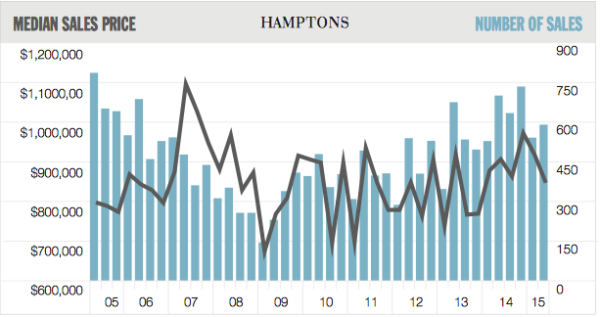 North Fork Median sales price of the North Fork housing market increased year-over-year for the fifth consecutive quarter and sales expanded for the fourth consecutive quarter. Median sales price increased 8.4% to $517,400 from the prior year quarter. Average sales price decreased 11% to $629,943 over the same period as a result of the decline in higher end sales. This was seen in the large declines in the luxury price indicators… 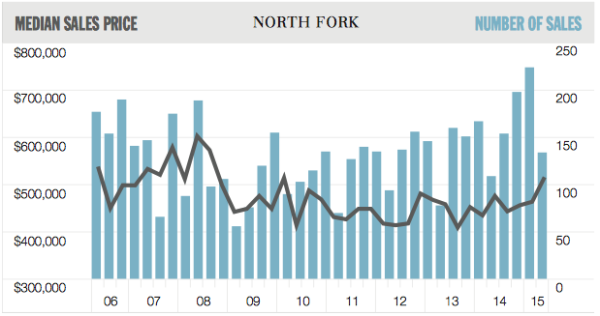 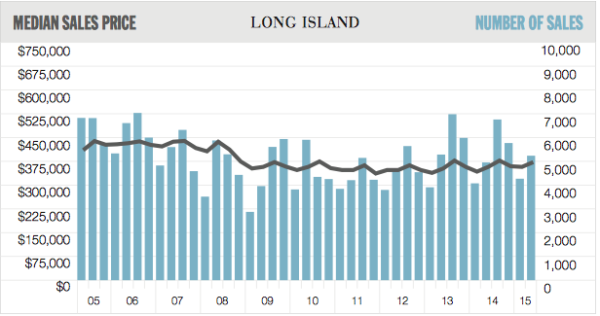 Fairfield County, CT Listing inventory slipped to the second lowest second quarter total in a decade, as housing prices showed mixed results. There were 7,721 listings at the end of the second quarter, down 2% from the prior year quarter. Even though condos only accounted for 23.3% of countywide sales, the 23.9% drop in their supply to 1,221 units pulled overall inventory lower. Single family inventory edged 3.6% higher to 6,500 units. There were 2,851 sales in the second quarter, up 6.2% from the prior year quarter. The absorption period, the number of months to sell all listings at the current rate of sales, fell 8% to 8.1 months, the fastest second quarter market pace in a decade… 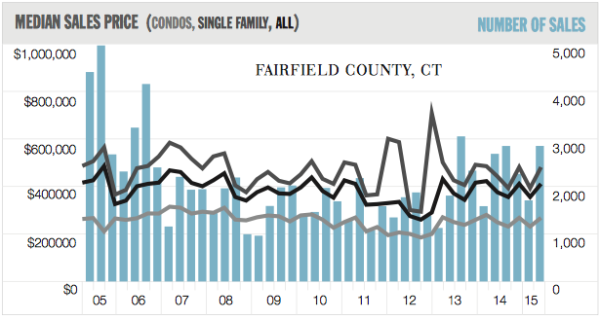 Greenwich, CT Greenwich housing prices and number of sales moved higher. Accounting for 20.1% of all sales, the condo market saw the most price gains as it shifted toward larger, higher end product. Condo median sales price jumped 41.4% to $947,500, while the average condo size jumped 36.9% to 2,311 square feet respectively from the prior year quarter. Single family median sales price increased 11.8% to $1,900,000 over the same period. Luxury median sales price, defined as the top 10% of all sales, was $5,325,000 and unchanged from the prior year quarter. The average size of a luxury sale was 7,563 square feet, down 17.7% over the same period, skewing average sales price much lower…

Aspen & Snowmass Village, CO The second quarter Aspen housing market was characterized by a significant shift in the mix to smaller sized sales after showing the opposite pattern in the prior quarter. The average sale was 2,445 square feet, down 31% from the prior year quarter causing similar declines in the average and median sales price indicators. The large drop in the average size of a sale occurred three times in the past three years. Average price per square foot, a price indicator that is less affected by sudden shifts in square footage, rose 2.7% to $1,219 per square foot from the prior year quarter… 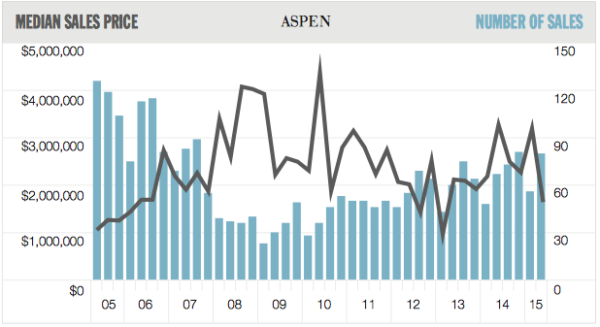 Los Angeles, CA The Greater Los Angeles housing market showed record prices, more sales activity along with faster marketing times and less negotiability. Median sales price increased 4.8% to $938,000 from the prior year quarter, a new record for the 11 years the metrics have been tracked. Average sales price expanded 3.3% to a record $1,464,325 and average price per square foot rose 3.6% to a record of $745 respectively from the same period last year. After five consecutive quarters of year-over-year declines, the number of sales increased for the second consecutive quarter to the second highest second quarter total in a decade… 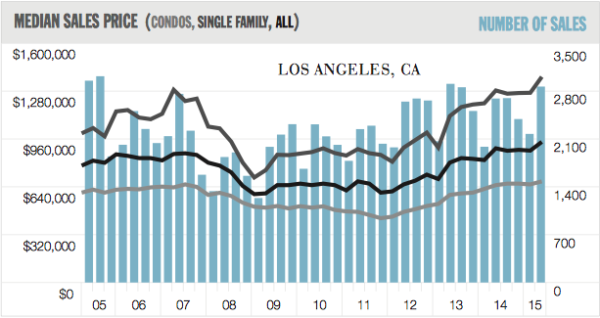 Well that’s it. I’m off to the hardware store to pick up some spray paint.