After the exhaustive first hand research into Pokemon Go last week, I want to share what people do in Manhattan when a rare Pokemon character is seen at 11pm at night. This serves as an analogy of what consumers and mortgage lenders do during a housing bubble. No one wants to miss the opportunity that presents itself.

My firm is based in Manhattan where Wall Street is largely headquartered and remains a core industry – providing about one quarter of the total wages but only 5% of the jobs. Every Wall Street job supports about 2.5 private sector jobs so city has highly leveraged its health to Wall Street. In recent years we have seen the rise of “Silicon Alley” which is a higher wage sector than most industries, but Wall Street remains very important to the New York City economy. So whenever layoffs, weak profits and bonuses are announced it can have a more highly levered impact on the economy. However this isn’t an auto industry-Detroit scenario but it is a concern. The Brexit aftermath may shine more of the world’s financial industry focus on New York City, away from London so there is a potential net positive.

I wrote a magazine article for Douglas Elliman five years ago heavily relying on the New York Times archives for notices about rental and sales prices. I remember reading an article that was written during the early 1920s (sorry, lost the link) with the pronouncement made (paraphrased) that “Wall Street will continue to be an important force behind New York City real estate.” That could have been written today and it would still be relevant. 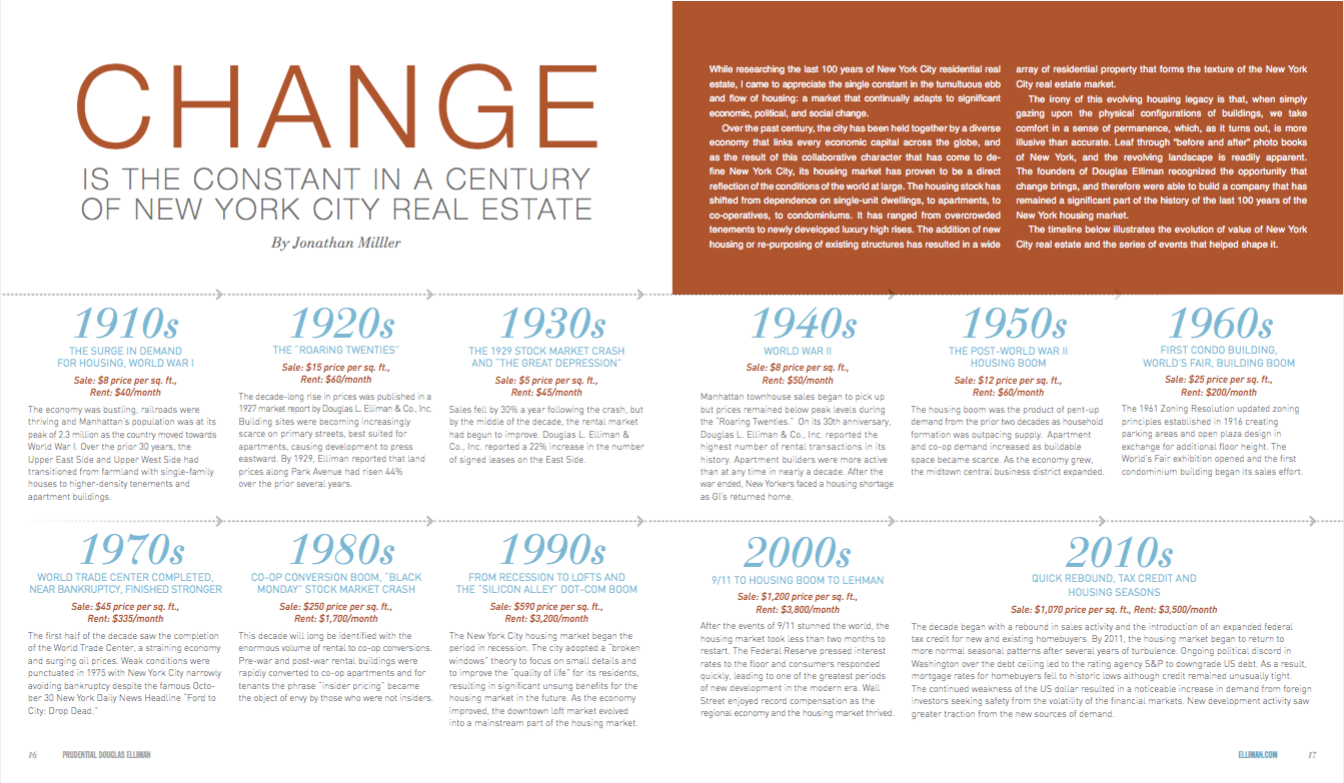 But from my perspective Wall Street has gotten housing wrong a lot more than it should. They have some of the smartest people on the planet running and working in these firms, with a slew of freshly minted MBAs from Ivy League Schools crunching spreadsheets and wearing out the batteries on their HP12Cs. I’m not saying they haven’t made a lot of money or good bets – think Blackstone’s single family foreclosure purchase frenzy – but the Housing Bubble and the recent overbuilding of super luxury condo and rentals should have been seen in advance. I’ll run through some scenarios I have observed over the past decade or so.

Here are a few thoughts on the current luxury real estate slow down. But first, here’s a great Hamptons chart from Bloomberg. 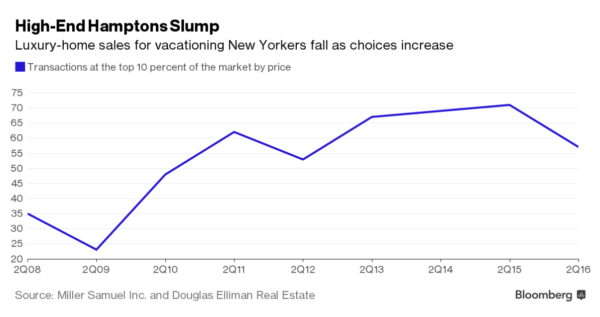 And many Wall Streeters seemed concerned about the Hamptons since the Bloomberg article that covered our market results was the top most emailed article all day world wide until stocks started to slide. 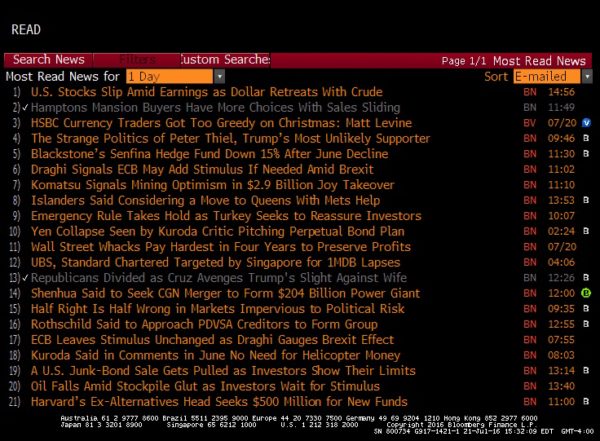 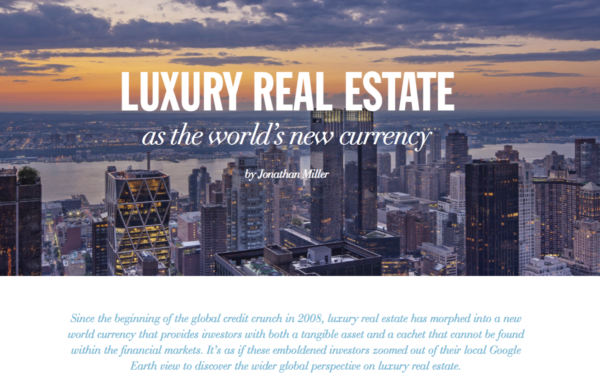 What is being overlooked in what many would characterize as weak results across many of these markets is the robust activity in the “bread and butter” markets of entry and mid level housing. Most of the markets we cover are showing very active markets below the “luxury” level.

The Last of the Second Quarter Market Report Gauntlet

Yesterday Douglas Elliman Real Estate published the last 7 reports that I authored covering the second quarter: Hamptons, North Fork & Long Island, New York; Fairfield County, CT including Greenwich; Aspen, CO; Los Angeles, CA. It’s been a whirlwind and we are even expanding our coverage for the third quarter. From the Hamptons to Los Angeles there were a number of new insights that were extracted and I will share over the coming weeks. One of the most apparent patterns seen in my research was that housing markets remain “soft at the top.”

Elliman Report: Hamptons Sales 2Q 2016 The Hamptons market shifted to a lower number of sales for the fourth consecutive quarter. The number of sales fell 20.5% to 561 from the same period last year, but remained 25% higher than the 450 quarterly sales average of the past decade. Listing inventory declined 9.9% to 1,527 from the prior year quarter, nearly in sync with the 1,522 quarterly average for the decade. As a result of a larger decline in sales than supply, the pace of the market cooled. The absorption rate, the number of months to sell all inventory at the current rate of sales, rose to 8.2 months from 7.2 months in the year ago quarter… 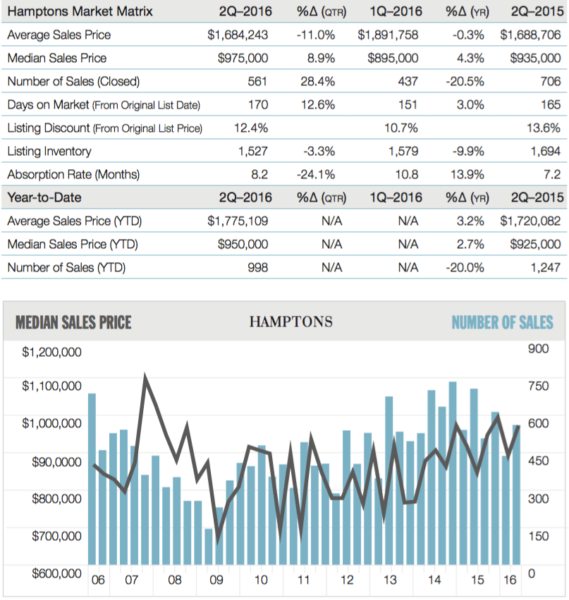 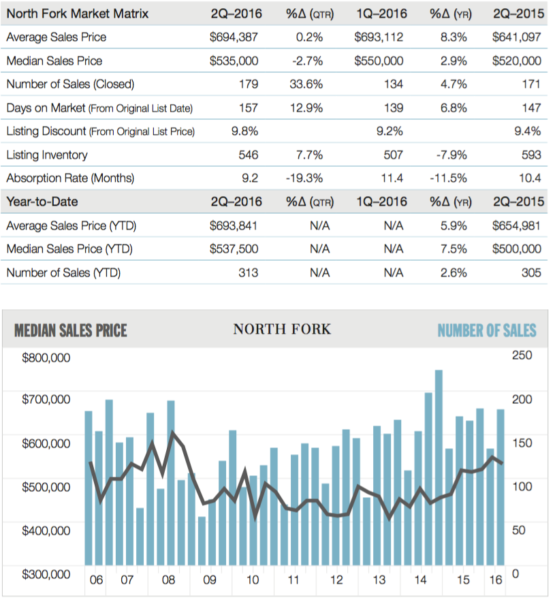 Elliman Report: Long Island Sales 2Q 2016 The Long Island second quarter sales tally was the most in a decade, a recurring suburban theme in the metro area. The number of closed sales jumped 20.8% to 6,324 from the same quarter last year. Signed contracts surged 28.8% to 9,610 over the same period suggesting heavy closing volume over the next quarter. Listing inventory fell to its lowest level for a second quarter in eleven years. There were 15,992 listings available at the end of the second quarter, down 6.3% from the year ago quarter. As a result, the pace of the market was at its fastest rate since 2005… 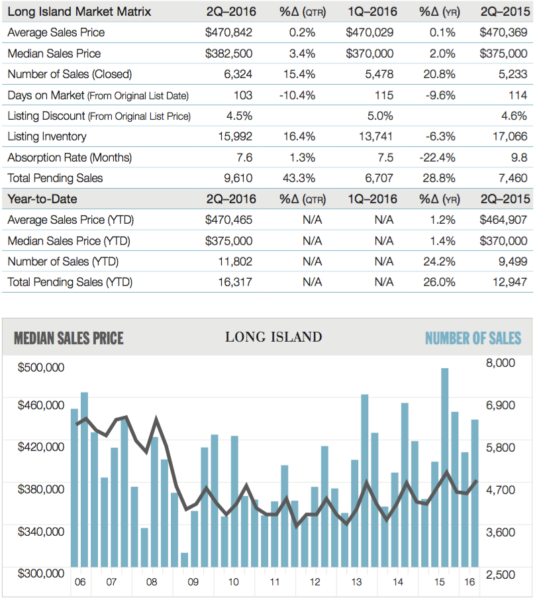 Elliman Report: Fairfield County Sales 2Q 2016 The sales surge across Fairfield County continued much like the rise in activity observed in adjacent counties that surround New York City. The number of sales jumped 30.9% to 3,944 from the year ago quarter and was the highest second quarter sales total in more than a decade. Single family sales increased 34.9% to 3,082 and condo sales rose 18.4% to 862 respectively from the prior year quarter. Renters and homeowners priced out of New York City have been seeking more affordability in the outlying suburbs in high numbers over the past year. However the surge in sales has not caused housing prices to rise, given the amount of slack that remains in the market… 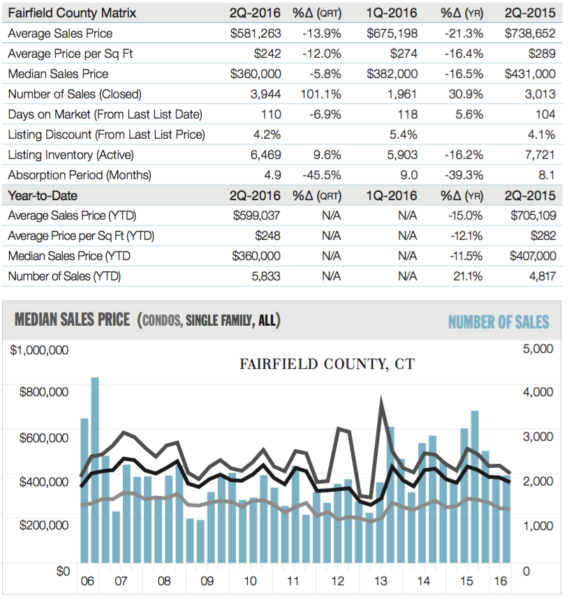 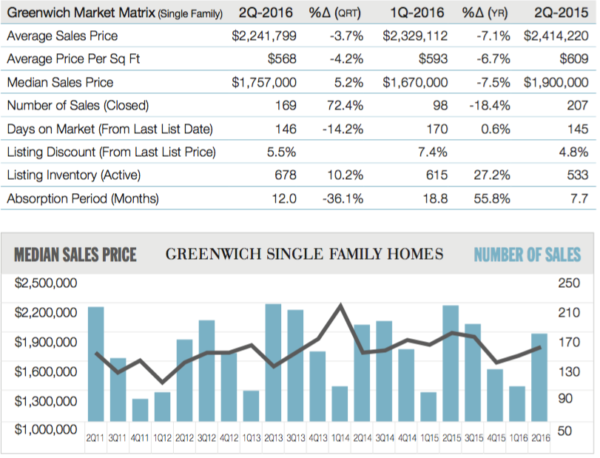 Elliman Report: Aspen Sales 2Q 2016 The Aspen market showed mixed housing price trends, with fewer sales but faster marketing times. After the previous quarter drop, the average sales size of a single family and condo sale returned to more typical levels, rising 4.3% to 2,551 square feet from the year ago level. Aspen did not experience the sharp rise in average sales size that Snowmass Village did this quarter. Median sales price declined 14.7% to $1,407,500 from the year ago quarter yet the remaining price trend indicators moved higher… 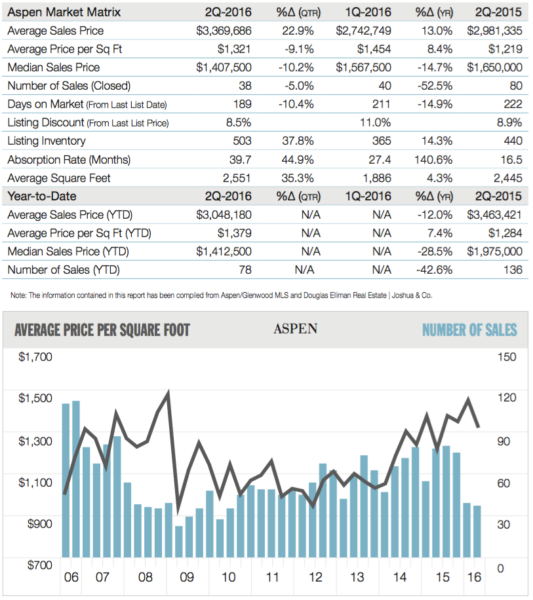 Elliman Report: Los Angeles 2Q 2016 Housing prices in Westside and Downtown Los Angeles moved higher, pulling more inventory onto the market. Average price per square foot for single family and condo sales rose 3.9% to $774 and a new record for the 12 years of this data series. Average sales price increased 5.9% and median sales price rose 7.7% respectively from the prior year quarter. Price trends in the luxury market, representing the top 10% of sales, did not keep up with the overall market… 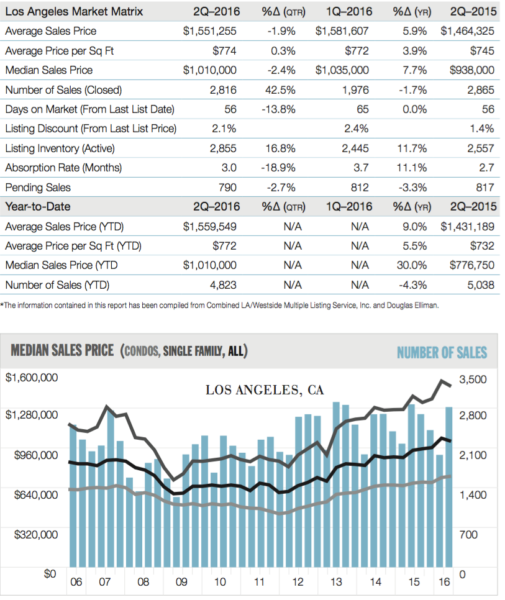 Flashback to the 1980s Lower East Side, Manhattan

You’d never recognize it now that gentrification has rebuilt it. I remember how scary some of my appraisal inspections were there in the 1980s. I’m all for waxing poetic about the days of yore but seriously, it was not New York’s finest moment.

If you need something rock solid in your life (particularly on Friday afternoons) and someone forwarded this to you, sign up here for these weekly Housing Notes. And be sure to share with a friend or colleague if you enjoy them. They’ll feel like exaggerating their worth, you’ll be glad you didn’t get hit by a baseball and I’ll practice riding my bike.