After the recent warm spell in the northeast, temperatures dropped from 70 degrees to 10 degrees. I’ve been in my element as a cold weather aficionado so I’m feeling pretty good about going into 2016. According to a recent study, cold weather can make us happy. Of course research like this can be wildly out of context with our everyday lives, but it also shows I’m not out of my mind. 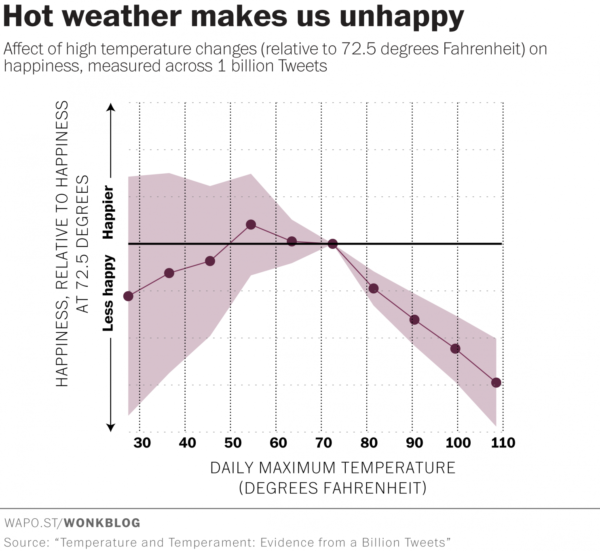 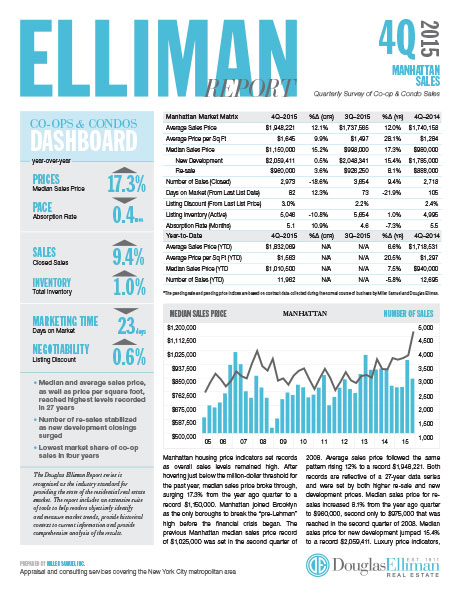 The Manhattan market report we have been preparing for Douglas Elliman since 1994 was published on Tuesday. The 4th quarter was a doozy and set off a media firestorm despite competing for news with the Chinese stock market volatility and the escalating crisis between Iran and Saudi Arabia. We like our real estate in New York. I placed about a third of the report coverage at the bottom of this Housing Note.

The three overall market price metrics we have been tracking for 27 years years (I was 5 when I started compiling) are:

The median sales price finally exceeded the pre-Lehman high set in 2Q 2008 of $1,025,000 and which was the last time this metric broke the $1 million threshold.

To better understand what happened, it makes more sense to look at the market by re-sales (81.4% of sales) and new development (18.6% of sales):

Re-sales
Median sales price jumped 8.1% year over year but inventory rose by 20.2% as sellers were pulled into the market by rising prices. However even with the rise, inventory remained about 18% below the decade average, which kept upward pressure on prices. Limited supply combined with affordability issues made re-sale sales fall by 1%. And by the way, 47.9% of all sales that closed in the quarter were at or above list price. 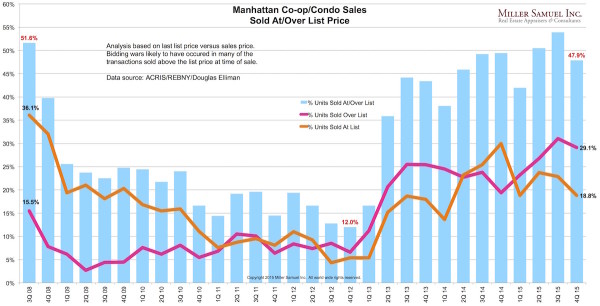 New Development
As median sales price and price per square foot set new records, closings of new developments surged 102.9%. These sales generally reflected contracts signed 6 to 18 months ago as the construction of their respective buildings were completed. In other words new development prices cast a wider time footprint than resales. What was especially interesting to me and the longest focus of my time on this report pertained to the actual drop in active inventory on a year over year basis. Despite the entry of 5,500 of new units to the housing stock in 2015, the actual number of “active” listings fell by about half in the 3rd and 4th quarters of 2015 after several years at a consistently higher level. Remember that developers only place a small fraction of their condo units on the market at a time. When contract volume drops sharply, the amount of inventory placed on the market – called “active” – falls. I think this trend is turning out to be a “tell” on the volume of contracts in new development (which are not reported). As contracts fell in 2015, developers put fewer listings on the market to replace those that sold as the absorption rate cooled. Take a look at new development projects that came on the market in the past few months – you can see how little supply is available, less than usual within each building.

The takeaway seems to be that even without the help of the new development market, housing prices are rising sharply to or at near record levels. With the slip in the number of re-sale sales, I see the market as something less than healthy, merely buoyed by the robust New York City economy. New development remains a highly visible circus sideshow. 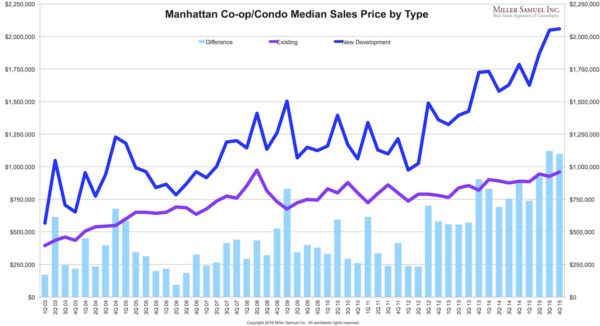 I’m sure I am over reaching in this next observation, but I am a bit annoyed. Blackstone may be an investment banking powerhouse but I was taken aback by their description of the Manhattan housing market in a recent press release, arguably intended to generate listicles for the financial blogging community.

8. High-end residential real estate in New York and London has a sharp downturn. Russian and Chinese buyers disappear from the market in both places. Low oil prices cause caution among Middle East buyers. Many expensive condominiums remain unsold, putting developers under financial stress.

Let’s parse it out:
– High-end residential real estate in New York and London has a sharp downturn – I can’t vouch for London but I agree the pace of new development sales is down yet there is no actual data on this. Housing prices have not shown any change at this point since there is a 1-2 year lag as buyers have to wait to close when construction is complete. What is true is that the “aspirational” pricing of developers reflect conditions of 2 years ago. When prices are discounted, sales rise – refer to 50 United Nations Plaza. Demand is there, just not at the intensity of previous years so it is annoying to portray a market devoid of any.

– Russian and Chinese buyers disappear from the market in both places. Russian buyers were NEVER a big part of the high end market. There were some highly visible oligarchs paying record prices but they were small in number. In fact high end purchases seem to correlate with country of origin tourism numbers. Russians aren’t even in the top 20. The Chinese remain somewhat active, not nearly at the same levels as a year ago. And with the gyrations in the Shanghai stock market, Chinese investors tell me that they expect a small upswing of foreign investment for 2016. But yes, sales are down sharply from the white hot frothy levels of the past few years as about 13,000 units will enter or have entered the 2015-2016 market in Manhattan alone. – Low oil prices cause caution among Middle East buyers. Middle Eastern buyers have NEVER been a factor in the Manhattan housing market at the high end. Yes there have been a handful of very high or record purchases but they are not a market force. London is a lot closer.

– Many expensive condominiums remain unsold, putting developers under financial stress. This is an assumption for now – even though I agree it will be the case – since it’s only been about a year since demand began to cool – largely from the strengthening U.S. Dollar and the drop in other economies. The early developments had much lower going in costs before land prices set records and early developments will or have already broken even at about the 40% sold, so they are in no hurry. However there is a reasonable if not certain assumption that will be a number of projects that will struggle with the drop in sales. This is largely because, with higher going in costs, they have less wiggle room for discounting to compete with the heavy volume of new product still entering the market.

Yes the Manhattan new development market is over supplied and yes contract volume is reported to be way off, but lets agree not to slip into reasons that don’t reflect the situation on the ground.

A recent article in WSJ’s Real Time Economics Blog “What Happens After You Beat the IRS in an Audit” was mind blowing and touched on the psychology of “moral hazard“, part of the narrative for the housing bubble and bust – that banks knew they would be bailed out by the federal government which incentivized them to take took more risks.

In a twist on this theme, the same logic applies to individuals. A recent study found that:

“The audit process might provide currently compliant taxpayers with a ‘window’ on potential opportunities for both legal and illegal tax avoidance,” the authors write. “In addition, such taxpayers may infer that the risk of a future examination is low.” The findings back up one of the core truths of tax compliance. If you think you’re being watched, you comply more faithfully.

In other words, after individuals get audited by the IRS, they tend to assume they are in the the clear and take more risks with their tax avoidance. They assume their chances of being audited in the future has been reduced.

Smashcut to the housing market…

The new brokerspeak for listings that have been priced dramatically above current market conditions are being called “aspirational pricing.” Love this phrase, LOL. The P.C. version my be re-phrased to “Housing Price Reality-Challenged.”

I talked about this, actually I laughed about this, in my recent appearance on Bloomberg Television’s new show this week, “What’d Ya Miss” with Joe Weisenthal and Scarlet Fu.

In my previous Bloomberg TV appearance on New Year’s eve I was asked to comment about a Max Frankel’s (former executive editor) New York Times editorial about taxing buyers of high-rise apartments in Manhattan, and not just the newly developed ones.

Like the braggadocio towers of medieval Florence, these concrete fingers in the sky mar the view for the rest of us for miles around. Maybe new laws and regulations will eventually limit their number and size, but much damage is already done, and the profits they earn are bound to sustain the trend for quite a while.

His observations are:
– Builders are selling apartments as much for $100 million a unit
– They attract the super rich, many with questionable assets
– They exploit weak zoning rules
– They block others views

Unfortunately he hasn’t heard of the New York axiom of real estate that “No View is Guaranteed, except those overlooking Central Park.”

This op-ed was written as if the developers snuck in at night and built these buildings, illegally making a profit at the expense of others.

Instead of suggesting the city shake down wealthy investors who bought these units, how about considering cutting costs to run the city? And cutting the cost of development while we’re at it. New York City’s bureaucratic largess is the reason the cost of construction is skewed so highly here. I’m no apologist but these buildings, from the super tall to the pre-war high-rises on Central Park West were built within zoning regulations that are legal and vetted. With the current high cost of land, developers can only build luxury property right now which is why we have an affordable housing crisis. The value in the views also means – after the 421a tax abatements expire (that’s another story) – that unit owners pay more in real estate taxes for higher values because of their higher floor levels. And lets be consistent as a city…100 years ago we weren’t taxing 40 story buildings because they blocked the views of 20 story buildings. In fact today’s super talls are far narrower than previous “tall” building configurations. It’s the width that blocks the park views for the lower height buildings, not the height.

And besides, the new evolving skyline looks and will look spectacular. Change is difficult for some people to process.

Blame the landowners for record condo prices, not the developers or property owners. And while you’re at it, cut down the cost of development in New York City and perhaps we can provide affordable housing for all those new jobs being created.

Sorry to get on a super tall soapbox here and be so Manhattan-centric.

If you need something tall in your in your life (particularly on Friday afternoons), sign up for my Housing Note here. And be sure to share with a friend or colleague. They’ll lose all sense of moral hazard, you’ll feel tall and I’ll be absolutely aspirational.