“Peak Plywood” and the Joy of Housing Forecasts

It’s the beginning of a new year and by now we are probably at Peak Forecasting. I don’t publish housing forecasts myself because as I like to say, “my crystal ball is held together with duct tape, the gray kind.” I am asked forecasting questions every day, and my disclaimer is longer than my opinion. I’m much more comfortable talking about what is happening right now. The listener, assuming they haven’t nodded off, can take it from there and hopefully the conditions I identified and the context I provided will help them get more comfortable with the future.

Right after I got out of college, I came across the show on PBS called “The Joy of Painting” which my buddies would use as code for the other “The Joy of” book that was ubiquitous at that time. I don’t know how to paint. I don’t want to learn how to paint. Yet this show was an occasional guilty pleasure because I loved how Bob Ross spoke. As the FiveThirtyEight article concluded: “The majority of people who watch Bob Ross have no interest in painting,” she said. “Mostly it’s his calming voice.”

His calming voice and the way he projected joy in doing something he loved was what I always aspired to have, but not his trademark hair and clothing style.

And this was what he painted… 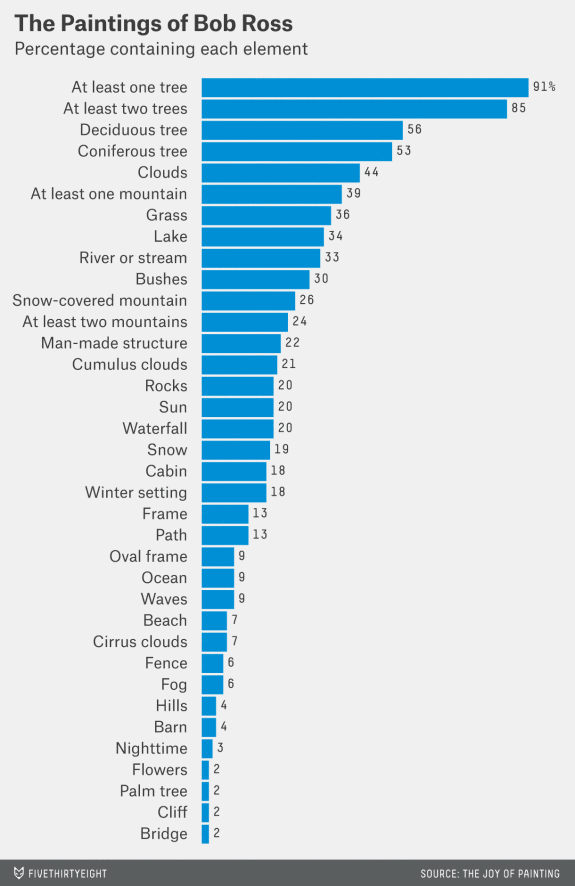 Our Elliman Report for 4Q 2016 Manhattan Sales Was Published

Yesterday the real estate firm Douglas Elliman published our research in the Elliman Report: Manhattan Sales 4Q 2016. The final quarter of the year gives some clues about how 2017 could shape up to be. It was clear that Wall Street was interested, as it was the #1 read story on Bloomberg terminals worldwide. I’ve got a screengrab for the number 2 position but I was told it eventually beat out BlackRock and Goldman Sachs coverage. LOL.

The biggest takeaway for me was the sharp expansion of seller sentiment towards actual market conditions via listing discount (and the sharp drop in bidding wars) had noticeably changed to be more in alignment with market conditions. 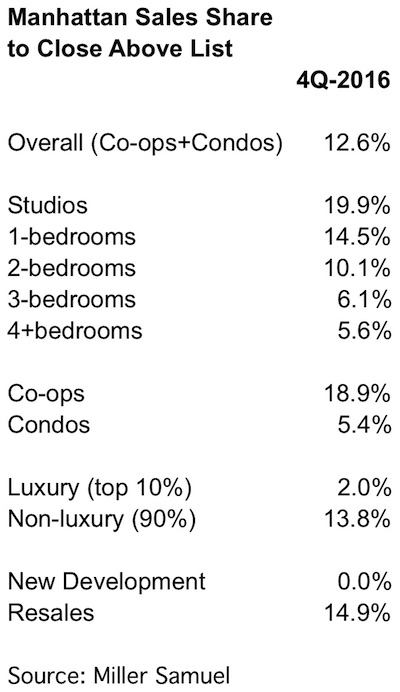 After removing “legacy contracts,” – my urban dictionary worthy phrase for new development contracts signed a few years ago that are closing now after completion of construction – resale price trends have been sliding. 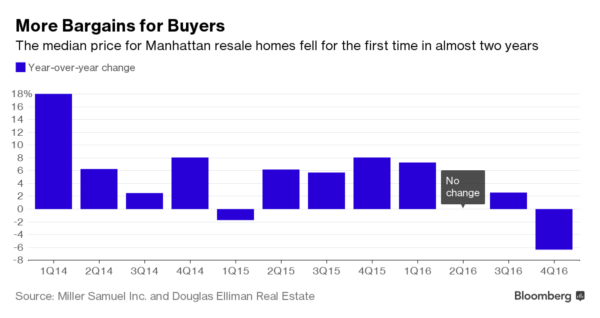 And here is a quick Bloomberg radio interview covering the Elliman Report.

Here are a few charts… 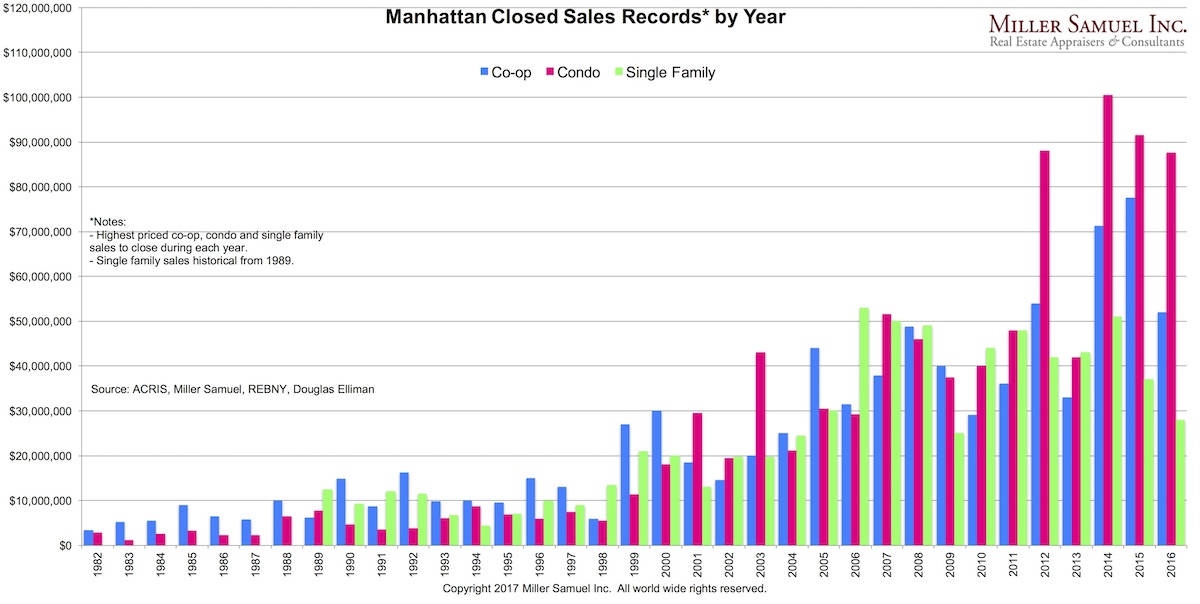 We May Be at “Peak Plywood”

Plywood has long been used to prevent damage inside vacant houses or for incoming extreme weather events. Housingwire reported that the Ohio became the “first state to ban the use of plywood on vacant and abandoned properties.”

Under the state’s new laws, “no person shall use plywood to secure real property that is deemed vacant and abandoned.”

The city of Phoenix, an area with heavy foreclosure volume, enacted similar rules in 2015. It will be interesting to see if this reduces the scale of the problem by incentivizing property owners to move faster to put the property into “stronger” hands. 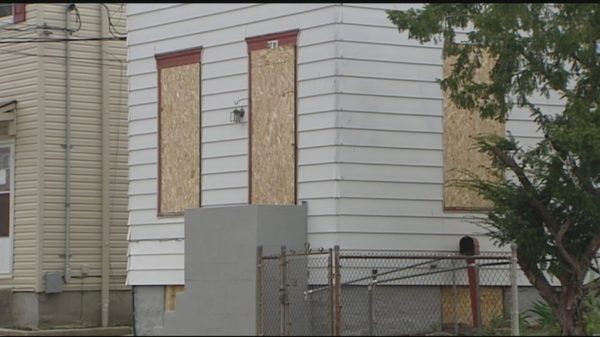 It’s hard to believe but we are still in the hangover phase of the housing/credit bubble. Stalled projects are becoming economically viable as the scarcity of land at a reasonable cost is dwindling.

There is a great article in the WSJ on this:

With Lots in Short Supply, Builders Revive Abandoned Projects: Developers and investors are starting to resurrect subdivisions that were left half-finished after the housing collapse.

The housing market’s boom and bust last decade left the U.S. with a surplus of vacant lots and half-built subdivisions many thought would never be revived. But tighter lending standards since the housing collapse last decade have made it difficult for smaller operators to develop land into buildable lots—the crucial raw material for new home construction—leaving builders to compete over a dwindling supply.

Now, builders and investors are starting to resurrect those half-finished subdivisions that were given up for dead after the collapse.

One of the byproducts of land shortages has been runaway prices, leading to declining affordability. Take a look at this great read about the Seattle market in the Seattle Times: Seattle-area home pickings slimmer than ever: high demand, limited supply. 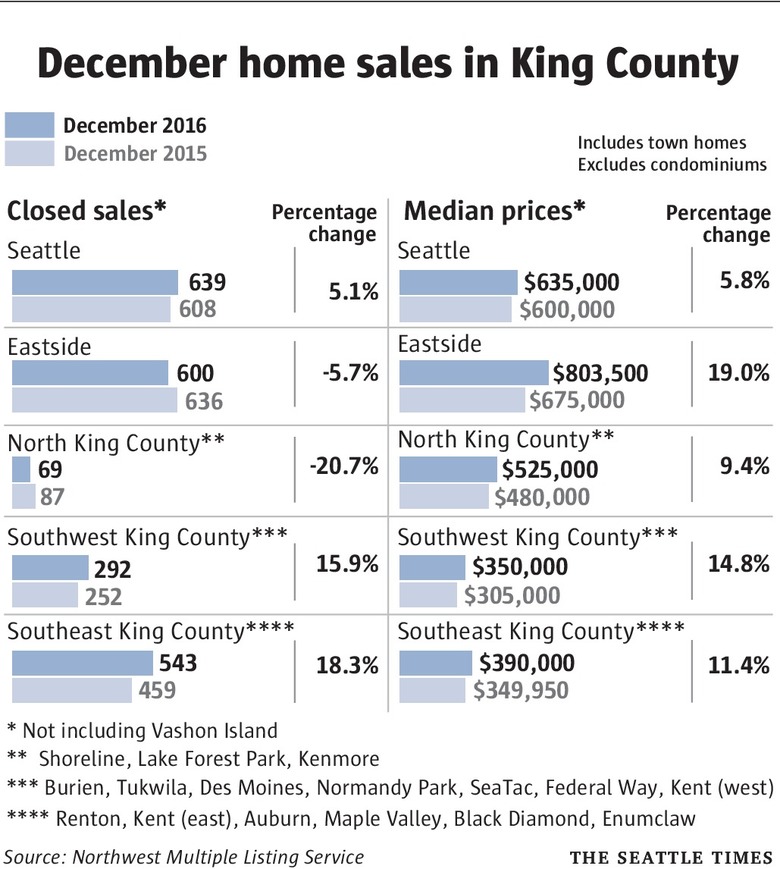 On the same topic, this Wired article title was probably the best one I saw this week: The Year in Housing: The Middle Class Can’t Afford to Live in Cities Anymore

and this is the condition we see now…

The casualties in this war are mostly the middle class. In 2016, rents continued their years-long rise, incomes stratified further, and the average price to buy a home in major US cities rose. The strain pushed the middle class out of cities like Boston, San Francisco, Los Angeles, New York, Austin—the so-called “hot cities.” Some families move to the suburbs. Others flee for less expensive cities. But across the US, the trend holds: cities are increasingly home to high-rollers who can pay the high rents or down payments and lower income people who qualify for subsidized housing.

Time Capsule: The Lower East Side of Manhattan

Switching from the heavy topic line, there is a cool, short video on the Lower East Side shared by one of my favorite neighborhood blogs, Bowery Boogie. My how the density has changed.

Take a Stroll Down Orchard Street, Circa 1962 [VIDEO]

If The GSEs Are Privatized, Interest Rates Jump Permanently.

The debate about what to do with Fannie and Freddie now that they have paid back their bailout debt continues. There is growing talk, especially from the incoming Treasury Secretary, to reduce the taxpayer exposure to another crisis and therefore another bailout. The problem with this thinking could be the permanent escalation of mortgage rates because the implicit guarantee by the federal government – the “backstop” – would disappear and therefore perceived risk would rise.

But accomplishing that goal — while keeping low-cost fixed-rate 30-year mortgages affordable and available to qualified borrowers — could be difficult, said Christopher Whalen, senior managing director at Kroll Bond Rating Agency. “Just about every mortgage that is originated in this country is guaranteed by the federal government,” said Whalen, referring to Fannie Mae, Freddie Mac and Ginnie Mae. “If you were to change that, the cost of a mortgage for your average consumer would go up several points — it would be more like 6 or 7 percent — because private investors are just not willing to take the risk.”

The “Go to” zen gurus of residential appraising

For most of the last year, I’ve been regularly linking out to great on the ground commentary from appraisers such as Ryan Lundquist in Sacramento and Tom Horn in Birmingham. You’ll see more from someone I’ve recently added to my RSS feed, Gary Kristensen of Portland. There isn’t a lot of competition out there that I can see, so feel free to make suggestions.

What I appreciate about appraisers like them is how they balance the craft, skill, personal and business aspects of appraising to tell a story. I also admire their willingness to share their insights to make users of their services understand and appreciate their expertise, as well as share with members in their profession including the competition, their knowledge. It’s a roadmap to success.

Here’s what Realtors think are the reasons. While we get caught up in the technical-ease, they provide an interesting perspective.

Trying to Get Out of USPAP

This attracted my attention. I would never have thought this would be a winnable argument against USPAP and it wasn’t.

Eugene Dwiggins appeals from the Missouri Real Estate Appraisers Commission’s (“Commission”) finding that he was subject to professional discipline for violating the Uniform Standards of Professional Appraisal Practice (“USPAP”), 2012-2013 Edition. Dwiggins contends it was improper for the Commission to apply the USPAP, because the 2012-2013 Edition has not been adopted as law in Missouri.

I have written or shared a lot of content this week over on my repository for this topic known as the Real Estate Industrial Complex. Check it out. My favorite post on REIC was the following….

Here are a few comments shared with me on the attached travel photos from the 4Q2016 issue of Valuation Magazine – it chronicled the globe-trotting of senior execs at AI National last fall.

“Would like to know how much travel money was spent overseas by the organization last year.”

“Page 5 exhibits clearly why the AI, absent huge changes, will never again get a penny from me. While the residential appraisal industry fades away in the USA the organizations feckless leaders party in Bucharest, Munich and Kyoto in the space of less than one month.”

My curiosity as a non-member begs a few fundamental questions about AI National travel policy:

These are simply the questions that come up in conversations with members. If AI National had the trust of their members and was transparent about such policies, there would be no need to ask. No one I know seems to know the answers to these simple questions. 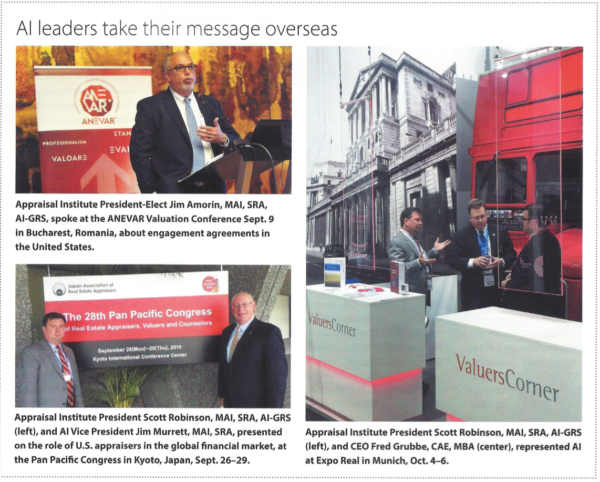 If you need something rock solid in your life (particularly on Friday afternoons) and someone forwarded this to you, sign up here for these weekly Housing Notes. And be sure to share with a friend or colleague if you enjoy them. They’ll be chill, you’ll learn how to spell and I’ll throw something big.