Feel the Housing Burn (But Don’t Try This At Home)

With our daily innundation of news and information, and the procession of optics like “perp walks” and “that’s not mine even though it was in my wallet” on shows like Live PD, did you ever get the feeling that laws and rules are optional to everyone else but you and a few people around you? And not just societal rules, but laws like gravity and physics? Well to me, it does on occasion. Please don’t try the following at home (if you live you happen to live near a foundry) and remember…there once was a “first time” for this.

This was the fourth week of the market report gauntlet for Q4-2017 in the expanding Elliman report series I have been independently authoring for Douglas Elliman since 1994.

Before we get into it, the Bloomberg article covering our Elliman Hamptons report release was the 8th most emailed story on the Bloomberg Terminals worldwide (350,000± subscribers) yesterday, but the following screenshot was taken towards the end of the day. I know Housing Notes readers insist on being number 1 – that’s why you’re here – so we can assume our own truth that the article must have reached number 1 during the day.

And then, it is important to share the chart for the piece because it was, well, a chart. The piece provides a good feel for what is happening out east. In addition to the Bloomberg story, there were other good reads including The Real Deal, Mansion Global and the Hamptons.com. 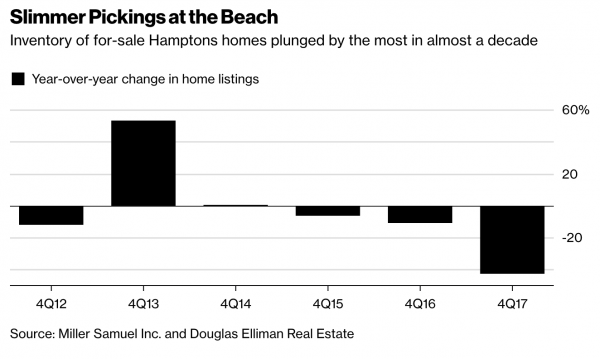 The Newsday article on the Long Island market was a good read as well and answers the question that many real estate brokers and other participants frequently ask me – “why is inventory low?”

Despite the strong demand throughout the Island, homeowners have been in no rush to list their properties, since the consistent increase in prices “sucks out the urgency to sell as owners try to time the market,” hoping to fetch the highest possible price, said Jonathan Miller, president of Miller Samuel.

And now for some of our charts on these markets… 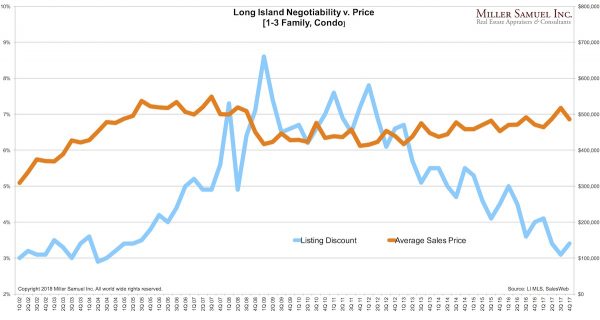 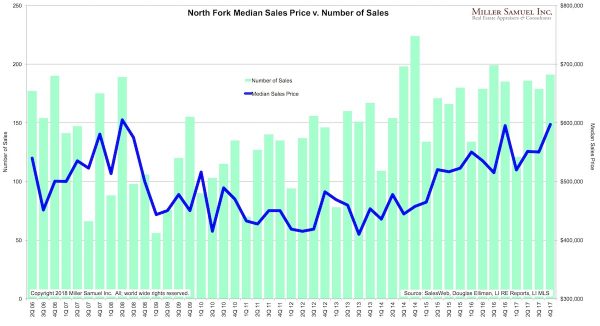 Douglas Elliman published our research on the Los Angeles and Aspen this market this week.

Aspen continues to rebound from the 2016 doldrums while LA and its submarkets remain plagued by lack of inventory, yet still sees softer conditions at the high end.

Here are a few charts on these markets (Aspen, Snowmass Village, Los Angeles): 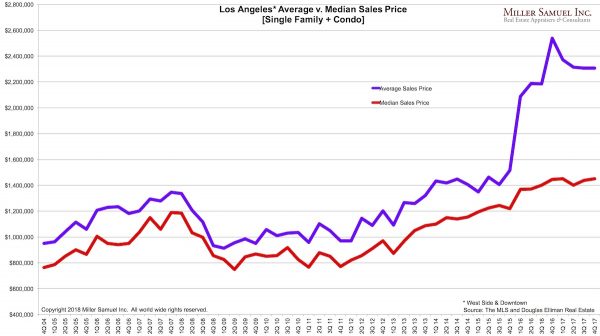 The Observer presented a fun piece on the Palm Beach market presented the three most expensive listings there. I talk about the exodus of “aspriational pricing era” by luxury sellers who want to actually sell their homes. But this time I sounded like a foodie:

The author of Elliman’s report, real estate appraiser Jonathan Miller, says that one reason for the spike is that Palm Beach sellers actually discounted their properties, resulting in a burst of sales.

“Sellers, having marinated in their aspirational stew for several years, are finally looking around and seeing that the market is moving without them,” Miller said. Asked why the Palm Beach market is flourishing, while Miami is experiencing far more modest growth, Miller explained that they are simply “two different markets.”

The highest listing at $195 million had a 5-minute video and I noticed a basketball rolling across the court by itself. Other than a 62,220 square foot house, this explains the asking price!

“Small Enough To Jail” Versus “Too Big To Fail”

A friend and appraiser colleague of mine just shared this documentary with me: Abacus: Small Enough to Jail – it was just nominated for an Oscar. I haven’t watched it yet but the trailer was riveting. I remember when the word spread about Abacus in our market but I didn’t understand the details. This is now available on Amazon Prime Video.

Worth watching. The message really applies to most U.S. housing markets.

Where The Cranes Are

Mike Rosenberg of the Seattle Times covers housing and real estate. I find him to be an essential follow on The Twitter.

A flood of new rental high-rises hitting the market late last year led to the first significant rent drop in Seattle this decade, with 6 percent declines downtown, where the bulk of the new towers are.

Fewer cranes but still a lot. 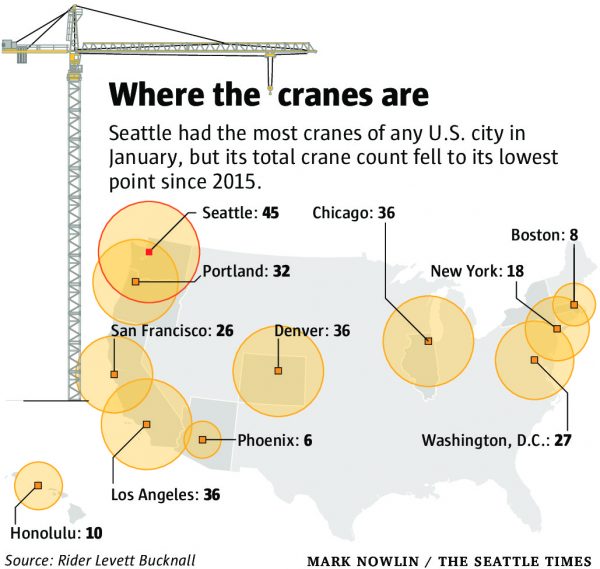 Bloomberg Has Zeroed In On The High Cost of Housing

A couple of good reads about markets we keep reading about:

“The scale of the wealth created here and the scale of the technology sector is going to outweigh the effect of the tax plan,” said Patrick Carlisle, chief market analyst with Paragon Real Estate Group in San Francisco. “The Bay Area is unique because we have companies that didn’t exist five years ago and that are now the biggest the world. There’s no place on Earth that has a similar dynamic.” 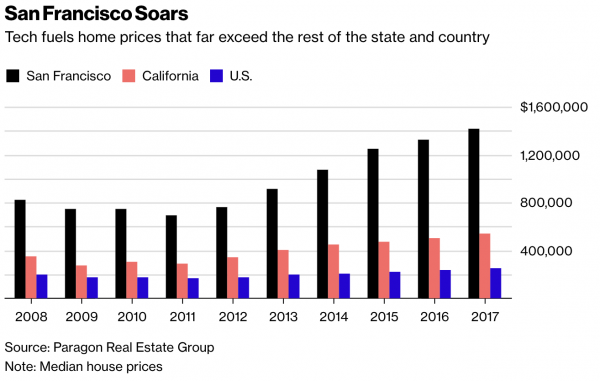 Redfin shares exactly what we are seeing in the local markets we cover. Luxury supply is falling. But it’s that paradox I’ve talked about before – listings existing the market in large numbers because they were always wildly overpriced but sellers are cutting their asks even more, resulting in record prices in aggregate.

The supply of listings priced at $1 million or above fell almost 24 percent from a year earlier, the third consecutive quarter of declining inventory, the brokerage said. Sales of million-dollar homes jumped more than 15 percent. 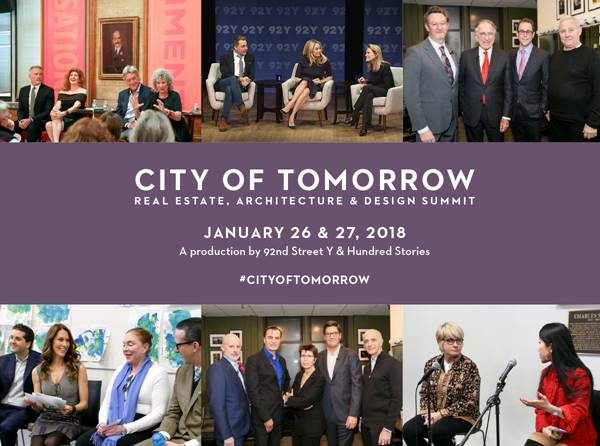 Saturday 10AM All Around the Town: Get the Inside Scoop from Top Brokers on Some of the City’s Most-Coveted Neighborhoods

“Join broker-experts and New Development gurus as they share their insights on hot neighborhoods such as Tribeca, the West Village and the Lower East Side. Learn where you can get unexpected value right now, what the next hot neighborhoods are to invest in, and which ones are making a comeback. Leave with an insider’s take on the newest “ground ups,” conversions, retail and restaurant concepts that are going to shake up the grid.”

“With a slew of fresh retail concepts like Peloton opening over on Madison, multiple noteworthy condominiums coming on line over the next 18 months, and primary or ongoing schools opening and expanding, there is no better time to be talking about the Upper East Side. Join our panel of experts and brokers as we take a tour around the neighborhood.”

The theme this week is “Get it cheap and fast” because “quality and reliability” is the same for all appraisers nationwide.” Right?

There was an epic Wall Street Journal this week called: What’s a House Worth? Wall Street Turns to Drive-By ‘Appraisals’ (behind paywall) that got the appraisal industry’s blood boiling. Here’s another publication’s interpretation of the piece outside of the paywall and yet another interpretation (I’m in this one, LOL).

BPOs for $10 bucks and outsourcing drive-bys from India…what could go wrong?

It is clear to me that Wall Street views the value aspect of asset management as a piece of paper that needs to be completed and thrown in a file. To save a nominal amount of money, they are behaving like commercial banks and mortgage brokers during the housing bubble.

Since the existence of the Federal backstop was confirmed by the bailouts in the banking industry in the aftermath of the housing bubble a decade ago, the take appears to be that there is no real need for competent asset valuation. Risk management is simply reduced to form-filling.

I like to paraphrase Mark Twain who said “History doesn’t repeat itself but sometimes it rhymes.”

Craigslist is A Great Way to Find The Best Appraisal Talent on Complex Assignments, Right?

Dave Towne sent me this example of a request for appraisal service on Craigslist which was pretty jaw-dropping:

One time gig. Need professional appraisal of two combined apartments. Unusual circumstances and layout. Not your everyday appraisal. Needed for current litigation, so must be thorough. Not under any time constraint. $500.

Can discuss further on phone call if you contact me. Thank you.

I can imagine how this case will go. I hope I am hired by the other side.