Last night’s axe-throwing (note the hipster “e” in ax) party at a Brooklyn bar was perhaps the most “hipster-ish thing I’ve ever done in my life. It was a “sharper” version of bowling, but for “edgy” people who have an “axe to grind.” I reached out for advice on Twitter beforehand and it paid off. I won the tournament (but trophy shops don’t have “axe” versions since the sport is so new (click on the tweet for the tips that made it happen!)

Exciting news – I am going to an axe-throwing bar tomorrow night with my staff. Since I am a first-timer, is there any advice you can “throw my way?”

But I “sharply” digress…

I’ve been the author of the expanding Elliman Report market report series for Douglas Elliman Real Estate for 25 years and it feels like 2. How time flies.

My research was published by Douglas Elliman yesterday and Bloomberg included a chart in the piece. As loyal Housing Notes readers understand: charts are what life’s all about (aside from becoming a grandfather this month, obviously). 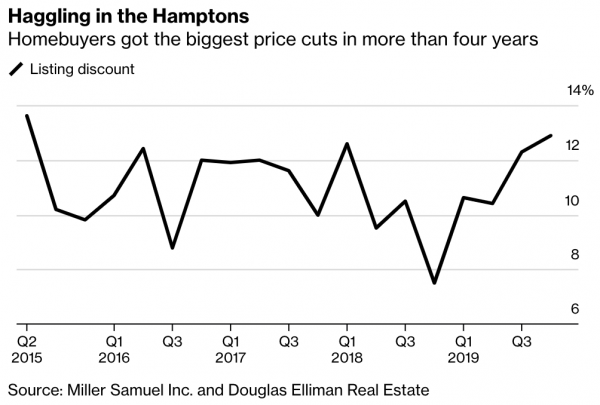 I don’t have proof this week but the report coverage by Bloomberg read by the 350K± Bloomberg Terminal subscribers made the top 20 most read yesterday. I don’t really need proof now that I already proved I can throw an ax.

Here are some key points made in these Q4-2019 reports:

“Rapid listing inventory gains over the past year took a breather this quarter.” 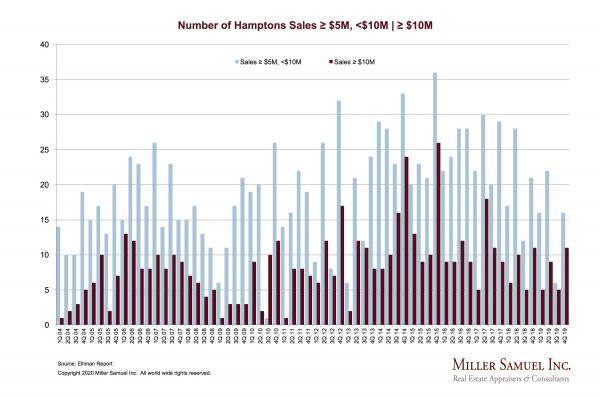 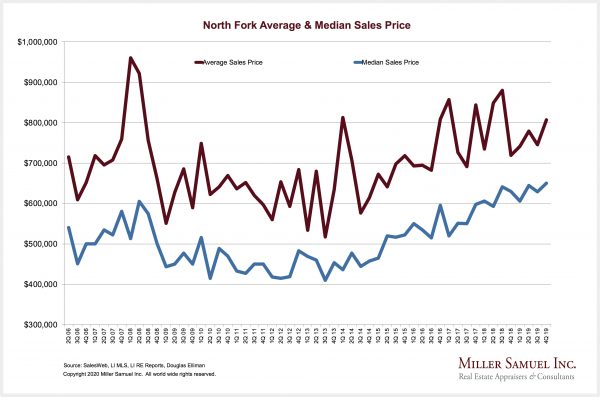 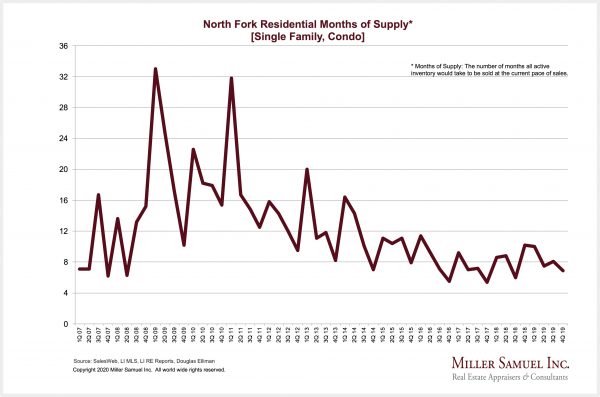 “Listing inventory fell to a record low as sales and prices continued to rise.” 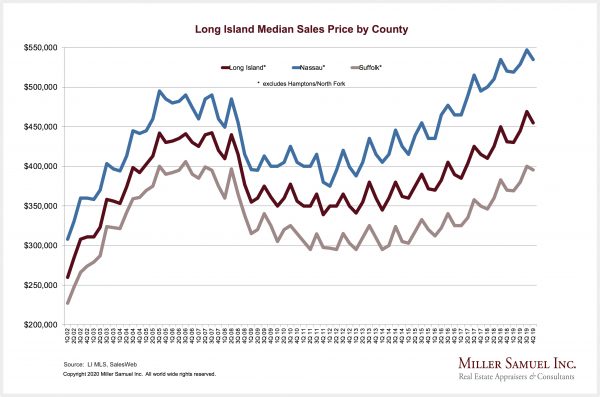 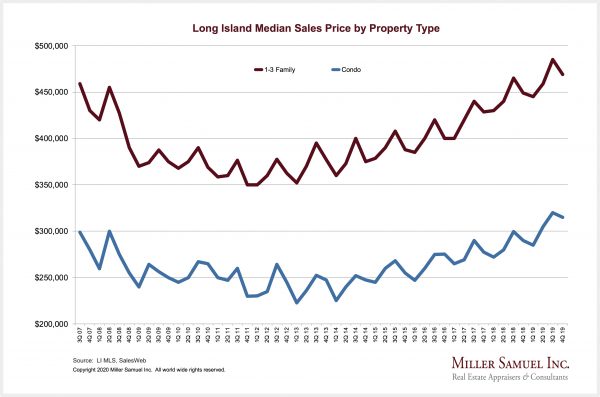 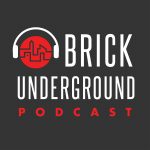 I joined Emily Myers of Brick Underground for my third interview on their podcast series. The discussion topics are covered here: The Brick Underground Podcast: How does NYC real estate move past ‘peak uncertainty’ in 2020.

Mortgage rates have fallen sharply over the past year as the Fed tries to save the economy from the trade war. But perhaps this recent decline is just part of the macro trend over the last 700 years of recorded history? 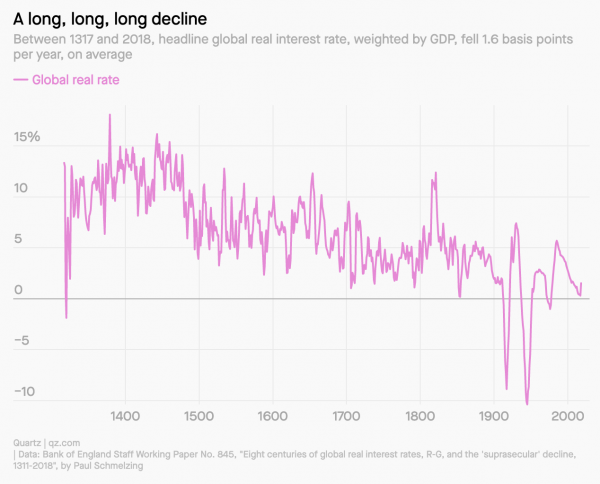 In one of the strongest U.S. luxury real estate markets of 2019 that boasted at least three sales just above and below $100,000,000, there are ten substantial listings around Mar-a-Lago that have been languishing on the market for an unusually long length of time. My contrarian theory in the Bloomberg piece is that homeowners adjacent to a celebrity property assume that it rubs off on them (their property value). I have never been a believer in the celebrity-effect pushing values above market levels. The quotes provided by some of the brokers don’t help that case for the higher value.

My favorite quote for explaining the lack of movement among these ten listings was quite amazing:

“It’s like when people get cancer and then they sue the power company and try to prove it came from the power lines.”

More Sales In The Wealthier Areas Of LA, But Prices Aren’t

The Real Deal LA wrote a great summary of the results of our LA analysis (Downtown+WestSide+Malibu) for Douglas Elliman. Mansion Global noted the uptick in Luxury Condo Sales.

And let’s not forget about Ski Country!

Trends “After six quarters of year over year declines, sales increased in the final quarter of 2019.”

Here are some key points made in these Q4-2019 reports:

“After six quarters of year over year declines, sales increased in the final quarter of 2019.” 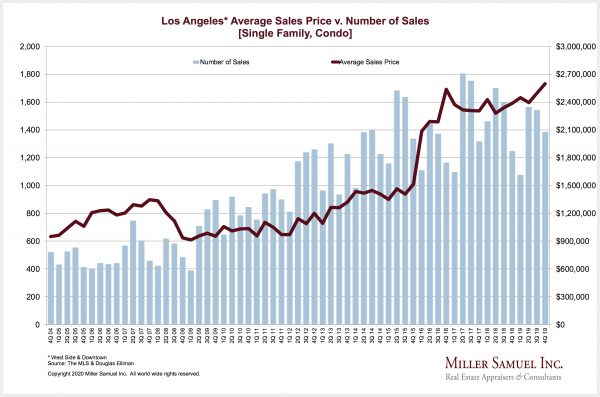 “Sales moved higher year over year across all the market segments.”

“Sales showed stability or pressed higher year over year across all the market segments.”

“Price per square foot moved higher as listing inventory declined across the region.” 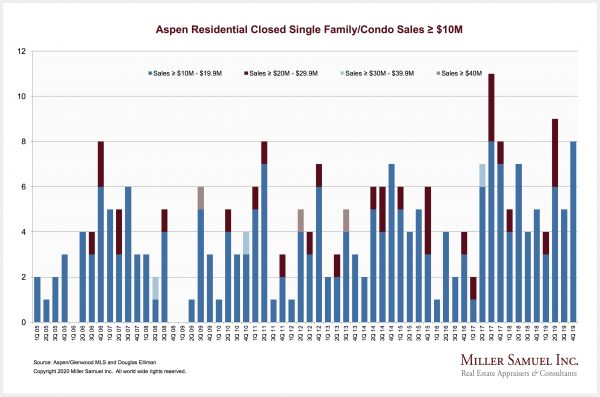 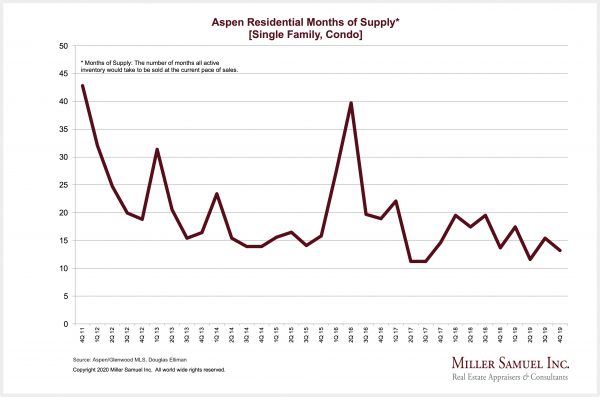 “Year to date overall sales and price trends were up, and listing inventory was down.” 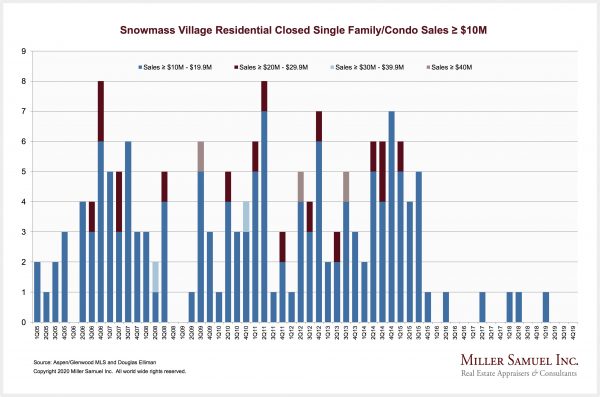 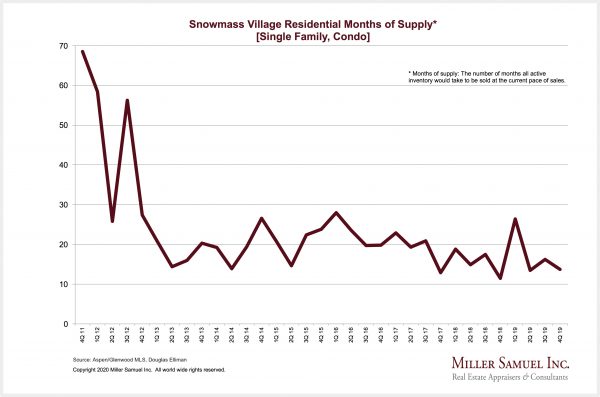 My favorite chart of the week

The median age of homebuyers in the US

Some Cobras Might Want To Look In The Mirror

In 2016 I began to wage a battle with the Appraisal Institute to bring to light how they were working against the residential appraisers’ interests by going to state legislatures (largely, Scott DeBiasio). What triggered my outrage was their attempt to take control over the local finances of each chapter and I’m not even a member. Their lack of residential representation continues today but the difference is, the appraisal industry’s deeper understanding of AI’s past behavior, linkage with AMCs including past senior officers who run them and lack of effectiveness in moving residential forward.

One of my thought processes during the effort was being forced to “choose sides” between The Appraisal Foundation and the Appraisal Institute because AI was doing everything they could to attack TAF. The residential industry was already being crushed by fees, partly due to AI’s alliances with REVAA and the legacy of past AI leadership working at or running AMCs.

Like most appraisers, I am frustrated by the argument that USPAP has to be continually updated and the realization that most of our industry simply can’t keep up with the changes. Setting standards is a good thing and I recognize and appreciate all the hard work that people on TAF do. My issue is the frequency of change and that’s what residential appraisers need to see changed. 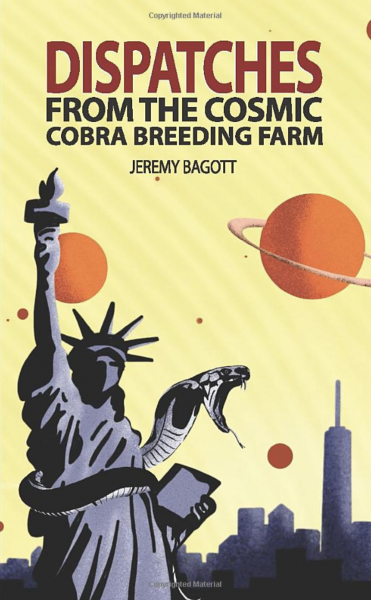 And then comes this bombshell new book “Dispatches from the Cosmic Cobra Breeding Farm” that I received this week and wow, the writing style of the author Jeremy Bagott is spectacular. This guy can write. The book cover looks like an Isaac Asimov sci-fi novel but it reads like Stephen King, full of current cultural references. I got it this week and have nearly read the whole thing.

The book’s favorite target is TAF president Dave Bunton who is referenced dozens of times and portrayed as the source of the problem, and references Dave’s $760,000 compensation. 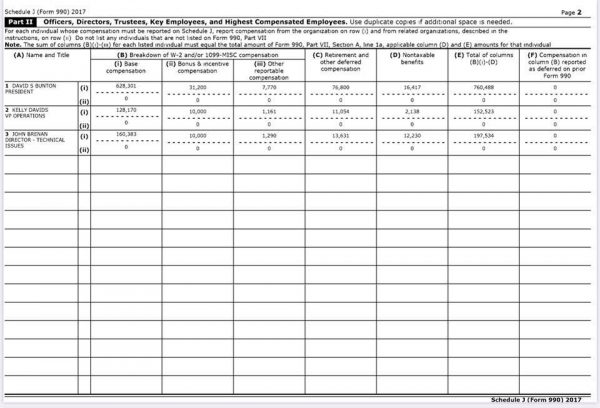 TAF responded with a note to correct the misstatement. 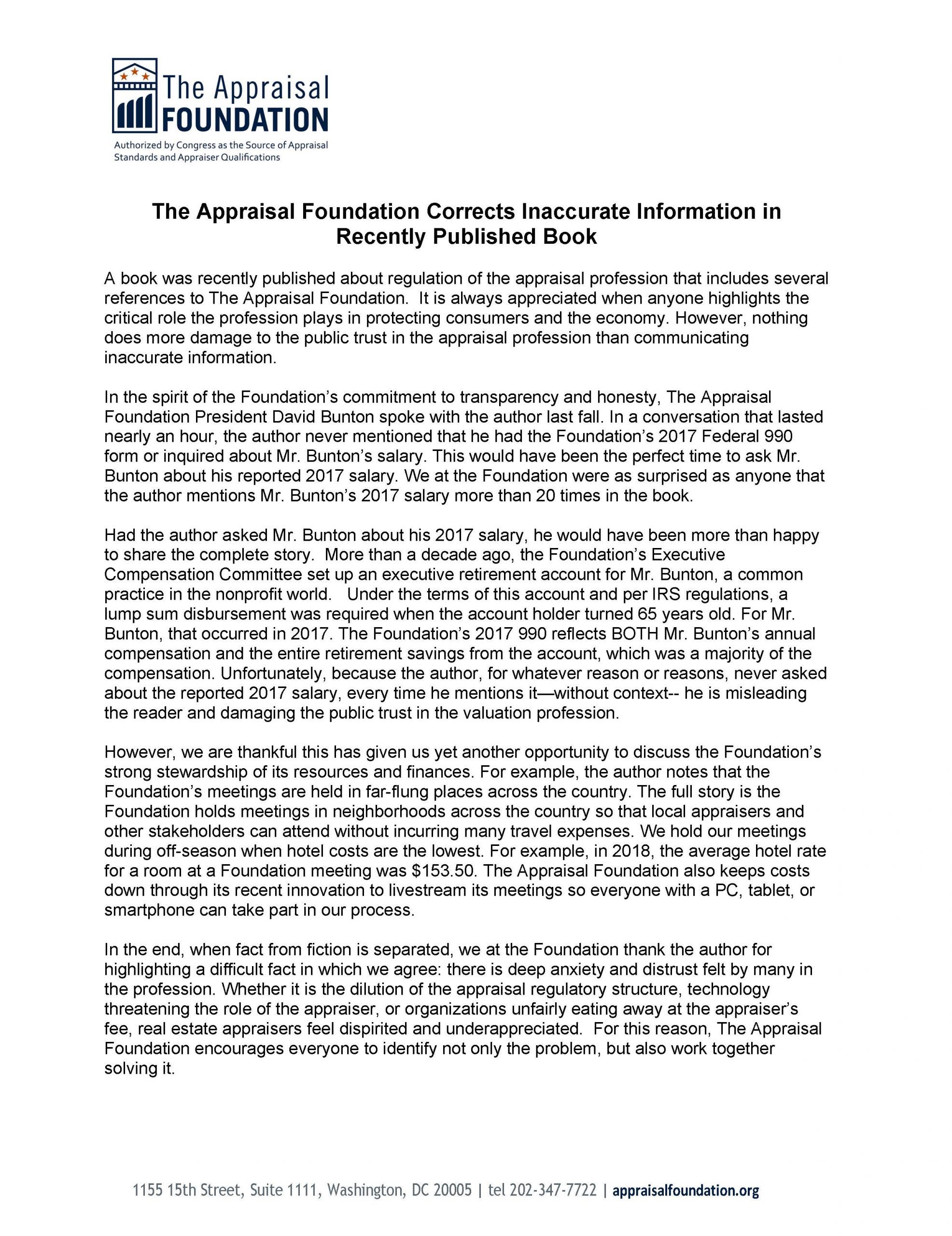 To which Jeremy responded:

An unsigned, undated memo on Appraisal Foundation letterhead was posted to the blog site “Valuation Nation” on January 22. The memo, citing “inaccurate” reporting in an unnamed recently published book, sought to further explain the 2017 annual pay of David S. Bunton, president of the Appraisal Foundation. The $760,000 pay package for the head of the 14-employee nonprofit, categorized as “compensation” in the Foundation’s Form 990, was reported to have included both an annual CEO pay component alongside an internal retirement-related payout.

“There are many open questions about the internal retirement component of Bunton’s pay if this memo is accurate,” said Jeremy Bagott, author of Dispatches from the Cosmic Breeding Farm, a book dealing with waste and abuse in appraiser oversight. “For example, have any additional sequenced internal retirement accounts been set up by his compensation committee or anyone else? One thing is clear: Bunton was no retiree in 2017. Nor was he one in 2018 or 2019. Even a onetime internal payout could have the effect of underreporting his pay over the coming years. Part of this haul was once our money, public money,” said the author.

Bagott contacted David Greer, Director of Communications for the nonprofit, seeking further comment. As of this writing, an email to Greer was unreturned.

Honestly, I found the author’s reasoning: “Bunton was no retiree in 2017. Nor was he one in 2018 or 2019. Even a onetime internal payout could have the effect of underreporting his pay over the coming years” was oddly weak and panicky, inconsistent with his strong writing style in the book.

I appreciate the distinction between AI and TAF but look at the performance of AI on behalf of their residential membership – it’s been zero.

“…public’s inability to access privately copyrighted standards once they’ve been incorporated by reference into public regulations. By “access,” read “purchase.”

This is reported to be a growing problem in law where copyrighted material becomes law, yet access to it is restricted. This insight is something for us to focus on going forward.

One flaw in Jeremy’s presentation, besides misstating Dave Bunton’s salary is that while Jeremy holds an “MAI” designation, the “MAI” designation of the Appraisal Institute is embedded into many state laws a la “incorporation by reference” because those laws require the use of an “MAI” in commercial appraisals in order for the appraiser to get the work. Selecting an MAI over an equally qualified commercial appraiser is now illegal under FIRREA. However, AI has continued to push for things like branded AI classes. One other thing, I thought the characterization of the ASC director was misrepresentative of what actually happened and seemed to be more of a cheap shot, again for effect. I know him and from direct experience, that guy is brutally ethical.

So to summarize the Cobra book:

Still, I’d read the book for its articulation on where residential appraisers sit today in the mortgage finance ecosystem. It’s brilliant.