I have often said that my favorite college mascot slogan in college sports is Stanford’s unofficial mascot – their marching band’s tongue in cheek “Fear the Tree.” Words to live by.

In many ways, the new federal tax law is the proverbial tree. As we look at its impact on housing, it is not falling on the roof. I believe there has been a broad overreaction. I’ll explain further in the notes.

Tree falls right in front of a car. pic.twitter.com/O3j7bIaLEA

This week Douglas Elliman Real Estate, the firm for whom I have authored their expanding market report series since 1994, has published a slew of reports this week:

The rental report results attracted the most attention, as we saw record concessions this month across the three boroughs. Westchester County continued to see a brisk market but some softness in trends fostered some interest.

On Bloomberg news, the stories covering these market reports were the number 1 and 2 most emailed stories across Bloomberg Terminals yesterday.

But what is better than a list? Charts, obviously.

Bloomberg News: Manhattan Apartment Rents Fall the Most Since 2014 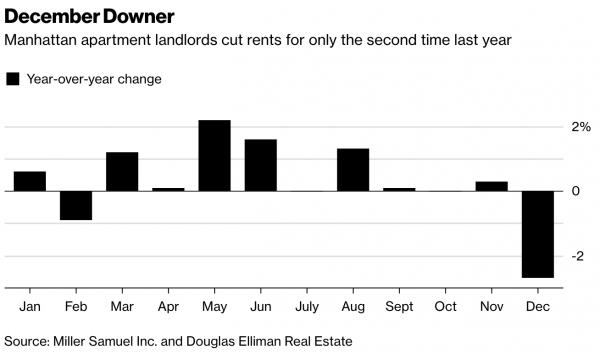 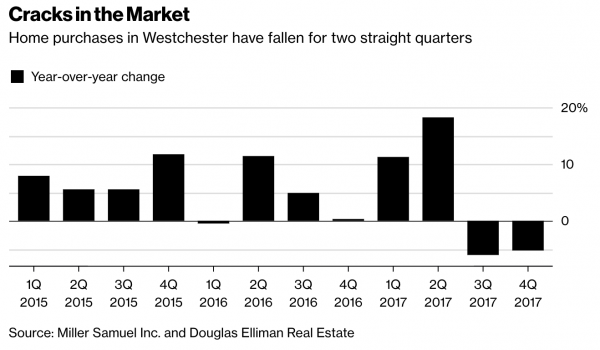 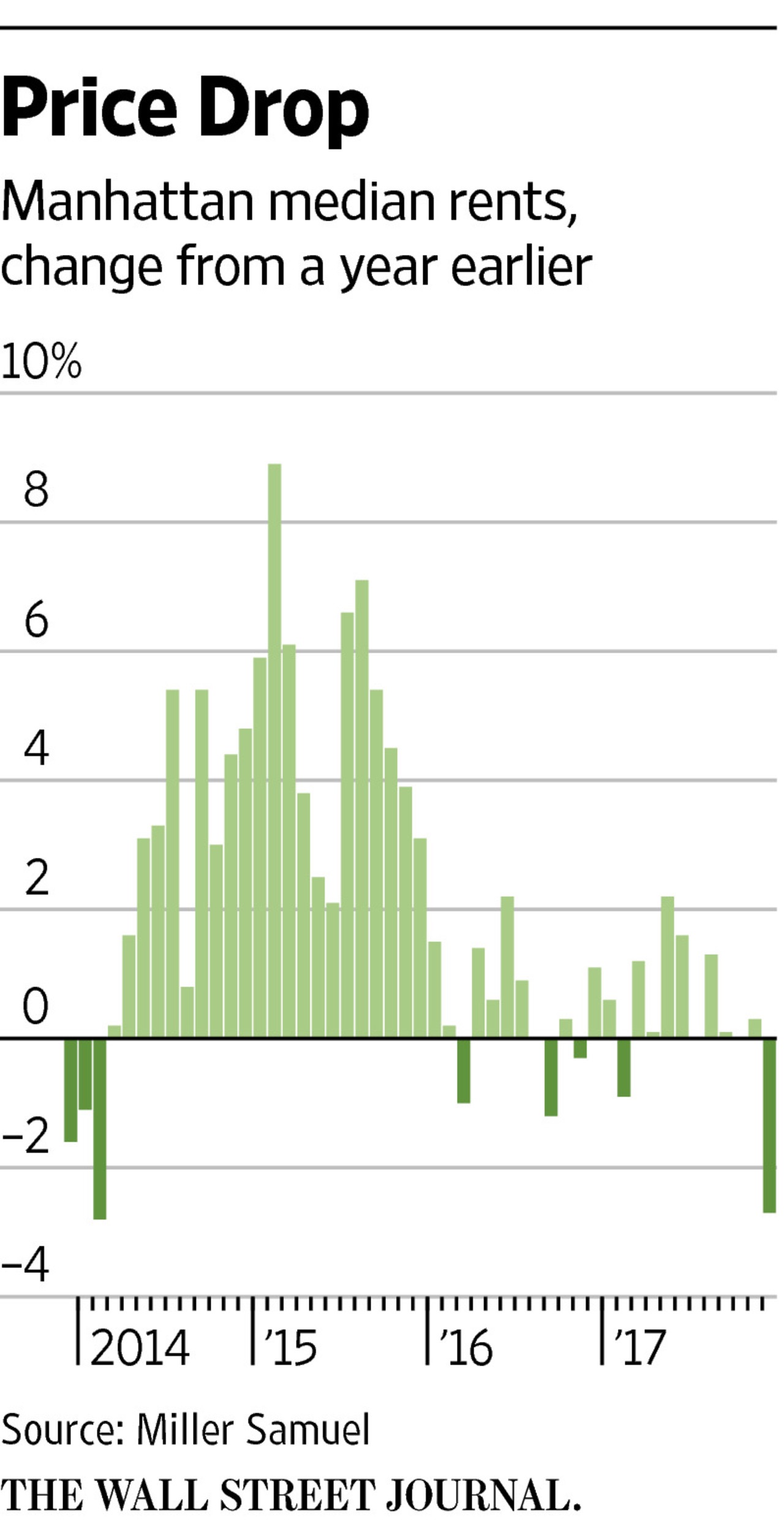 So I was walking down Fifth Avenue in Midtown Manhattan in the late morning yesterday after a meeting and got a call from Bloomberg TV. Apparently, two different stories that featured two of the market reports I author – published by Douglas Elliman – were the number one and two most emailed on the Bloomberg Terminals worldwide.  They wanted to talk about the results.

So I took a left and walked over Bloomberg HQ.  Got to speak with Vonnie Quinn and Shery Ahn on set – who knew how to make an interview go well.

This is a 2-minute clip of the 5-minute interview, but you’ll get the gist. I’ll expand on this discussion tomorrow at 2 pm when my weekly Housing Note is released. 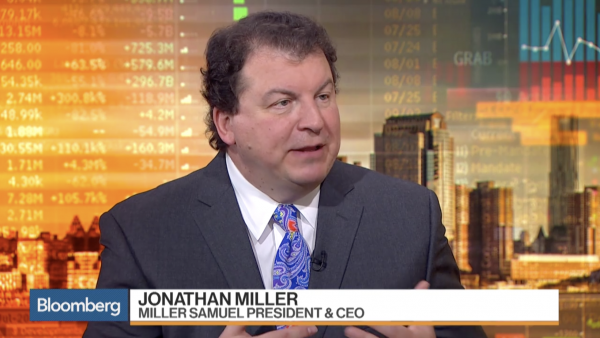 Over the past few weeks, I’ve spoken with many people about the new tax law. I have fought the urge to let my eyes glaze over and dream of watching paint dry.

The impact to housing is a combination of price, mortgage amount and SALT on top of local market conditions and personal financial situations. One of my biggest epiphanies has been the interaction with the Alternative Minimum Tax (AMT). It was basically designed pre-new-tax law to require those who took too many deductions to pay more tax. So when pundits try to explain the impact to homeowners, it tends to be overstated because they tend to look at deductions without any context (me included). For example, the average property tax in Westchester County, New York is the highest in the U.S. according to ATTOM. With the $10,000 cap on property taxes (set aside SALT for a second), that infers that the average homeowner just incurred a $10,000 increase in tax exposure at whatever bracket they are in because their total property tax bill was $20,000. But before the new law, their $20,000 real estate bill may only provide $12,000 after the AMT calculation. Going from an adjusted $12,000 deduction to a $10,000 is much less severe than going from $20,000 to $10,000. That’s the general idea.

Admittedly I’m still struggling with the aftermath of the AMT implications. Shared insights are appreciated.

Ken Griffin just bought the highest priced condo in Chicago for $58.75 million, he is reportedly under contract for around a reported $250,000,000 in Manhattan at 220 Central Park South and he has been assembling Palm Beach oceanfront parcels well in excess of $100,000,000.

The Denver housing market has been booming. But like most urban markets, there has been way too much product constructed in recent years that has been skewed to luxury. You can thank the flood of low-cost capital from a low interest rate world. The push towards additional supply did not appear to factor in the new product being created.

This chart is a little scary. 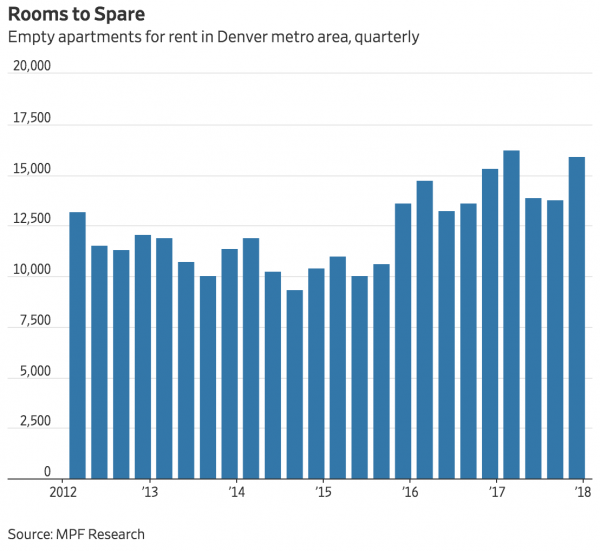 January 24, 2018 – Fordham Real Estate Institute at Lincoln Center: panel co-hosted by the Real Estate Services Alliance (RESA), “Tax Reform’s Impact on the Real Estate Market.” Keynote presenter Richard Shapiro, Director at Eisner Amper, will demystify the new tax bill, reviewing the changes that individuals and businesses will face starting this year. From there, a panel of market leaders will discuss the impact on both the residential and commercial real estate markets and share insights on what to expect in 2018. The panel will feature:

The event is free – but you need to register.

That all caps phrase is a marketing technique mastered by Steve Jobs of Apple.

In appraiser speak, the effective date of the following press release is in 2018, but the actual age could be any time since AI’s inception with only slight modification. The new Appraisal Institute president Jim Murrett looks like yet another old guard inner circle executive as evidenced by this super generic press release-as-interview for Appraisal Buzz.

Reading the release, you’d never know that AI National had a terrible year in 2017 that began with their self-serving actions in late 2016.  To be fair, AI National was very good in leading the industry’s response to the Tristar Bank appraisal waiver request outcry. I would encourage them to do more to look out for their membership using that event as a template.

Here were the issues facing AI National in 2018 that the new president didn’t acknowledge in the slightest:

Now please re-read the press release and tell me how 2017 was a good year for AI National – our industry’s largest trade group and whether they as an organization learned ANYTHING from their recent mistakes, included a massive, unheard of, membership uproar. Former CEO Fred Grubbe may have been the only one to understand that after than a decade of leading the organization and its culture into irrelevancy, it was time to leave.