While Bloomberg has become well known for its cool visualizations, they aren’t known for going retro. Their new “American Mall” game basically illustrates how malls in America are largely doomed. It worked well on my iPhone and my Mac (dooming malls, that is). 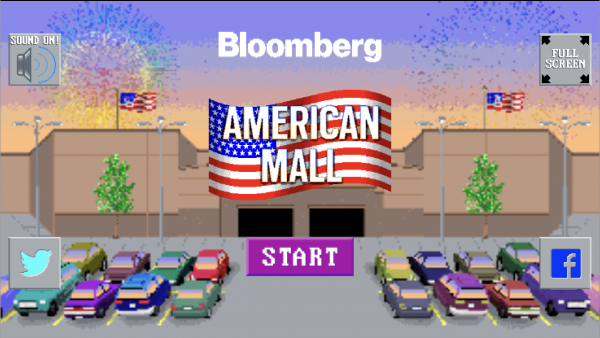 To play this game for hours – like my college roommates played asteroids – you’ll need a recharger that reflects society’s dependency on chargers:

It’s the sixth week or 2018 and the sixth consecutive week of market report releases for both my firm and Douglas Elliman, the real estate firm that has published our work since 1994.

This month we chronicled the continuing deterioration of the rental market in New York City as it moves from “extremely” expensive to “very” expensive. Landlord concessions, a product of overbuilding luxury rentals, continued to set records against a backdrop of very strong local economic conditions. And because I refuse to come into the office unless Wall Street reads our new research, it was a relief to see Bloomberg coverage of the New York City rental market – that included the Elliman Report – was the number 1 emailed story on the Bloomberg Terminals Worldwide (±350,000 subscribers). There was a lot of other great coverage as well.

The key storyline across all three New York City was the record use of concessions. The market share of landlord concessions – inclusive of paid brokerage commissions, free rent, and other costs – was 49.3% in Manhattan, 47.5% in Brooklyn and 50.8% in the northwest region of Queens.

And of course, I love a good chart with my data… 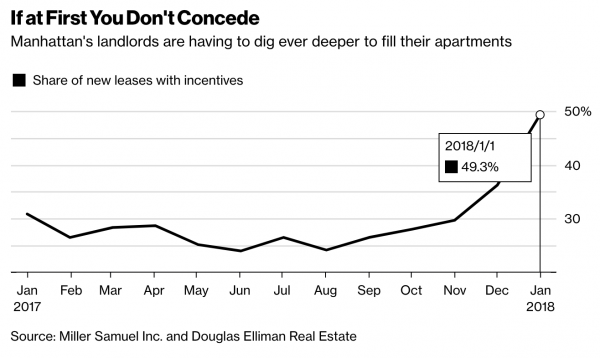 Here are a few charts from our Manhattan, Brooklyn and Queens rental galleries: 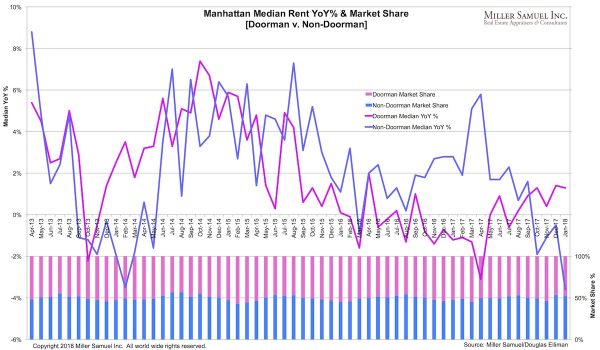 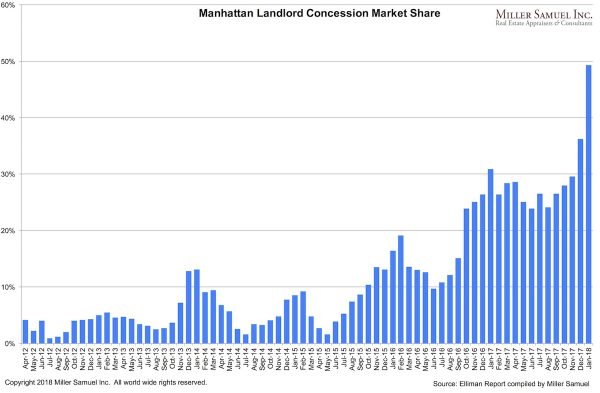 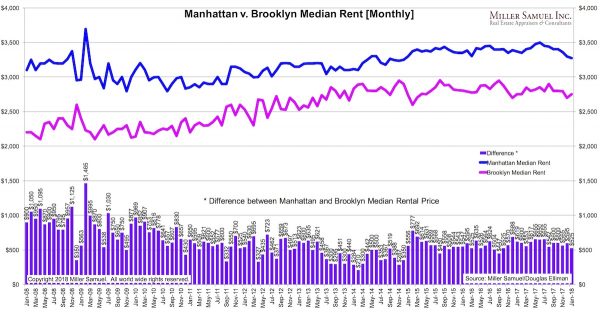 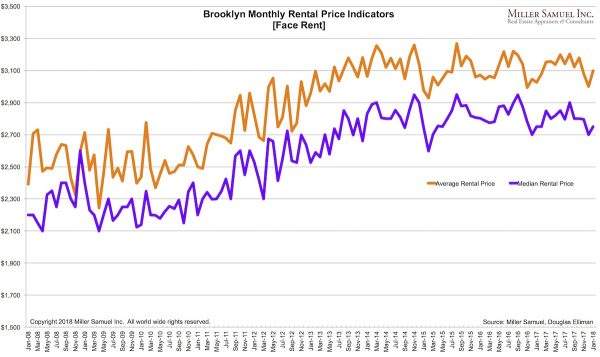 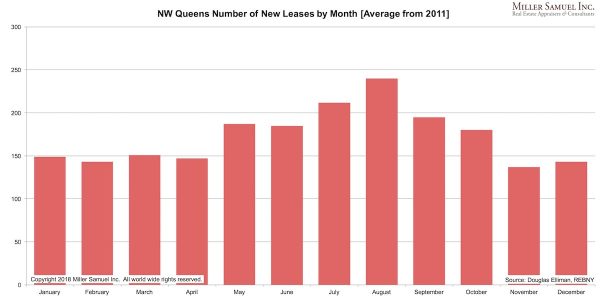 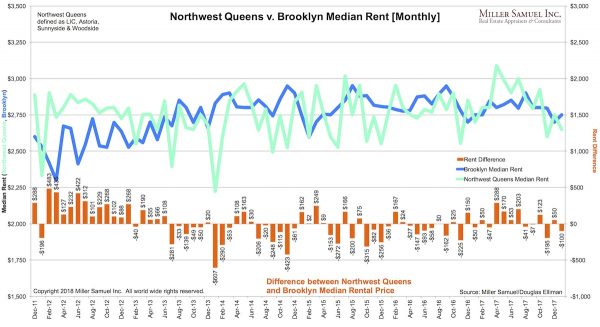 There is a fascinating New York Times article just out: The Secret Code to a Changing New York: Its Dogs

Full disclosure: The University of Connecticut’s Husky mascot is named “Jonathan” and deep down I am very proud of that.

New York’s dogs are as varied as its people, and their numbers can be just as telling. They can be a cipher for understanding gentrification, and sometimes predicting it — when the designer pups arrive, rising home prices may not be far behind.

Here was my contribution to the piece:

Roughly 80 percent of Manhattan apartments allow dogs, but co-ops are four times as likely to restrict dog ownership, he said.

As I’ve said for years, my bucket list includes attending the co-op board weighing-in ceremony to confirm whether or not a dog exceeds the 50-pound limit. And here are some random pet data I track in Manhattan… 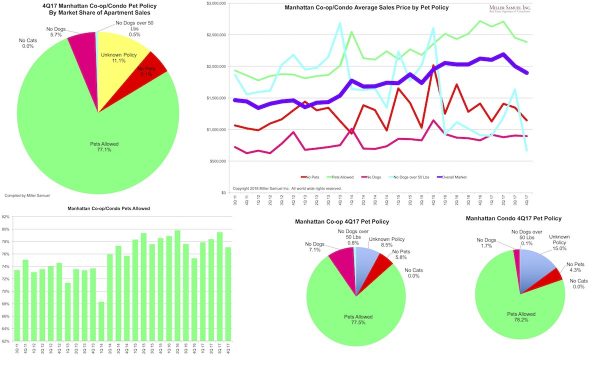 While overall mortgage lending standards remain historically tight, there has been some easing evident over the past few years.

More than 10 percent of FHA borrowers this year have credit scores below 620, compared with 2.62 percent in 2014. And 51 percent of FHA buyers had debt-to-income ratios of more than 43 percent — up 8 percentage points from 2014, according to MBA data.

FHA loans are now seeing a rise in defaults in this Bloomberg chart: 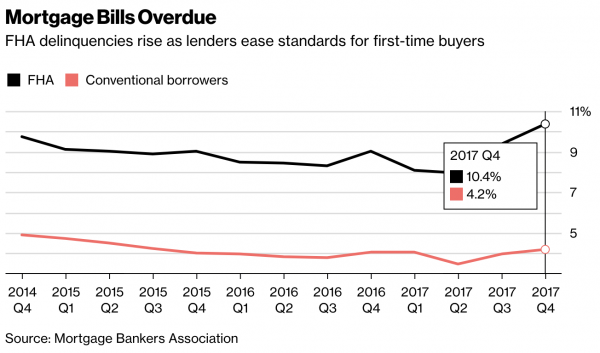 The website Curbed has been doing a lot of great longform stuff lately and this photo gallery and analysis of the retail corridor on Manhattan’s Canal Street is along the same lines. This photo essay is fascinating.

It caught my attention because I remember going to the store featured on the cover in the mid-1980s shortly after we launched our appraisal company. I was looking for rolls of rubber mats I could use on metro shelving to hold books and smaller items. The exterior appearance hasn’t changed a bit. Before the days of Amazon and a product saturated consumer internet, I remember seeing this store and visited it after an appraisal inspection just to the north in Soho. They had just what I was looking for and I remember how strongly the store smelled like a new tire.

Where Are The Woman on Real Estate Reality Shows?

There was an interesting piece on the new “Quartzy” section of Quartz that dabbles in culture and media coverage: WHY ARE THERE NO WOMEN ON REAL ESTATE TV SHOWS? 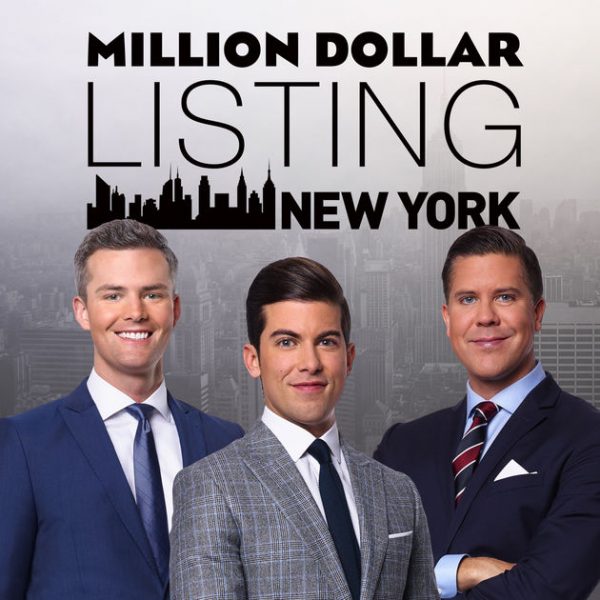 The reality show genre is one I’ve never been comfortable with although I’ve been approached eight times in ten years to do one. While I don’t have a problem with them, I just don’t watch them other than when channel surfing – aside from “Cops” and “Live PD.” but for that, I have an excuse: one of my sons is a police officer. I work with real estate brokers all day so perhaps that is why I don’t want to watch it at night. What is more interesting to me about the real estate agents in all these shows is how they each leverage their newfound celebrity to make their own business grow. Now that would be interesting to learn more about. 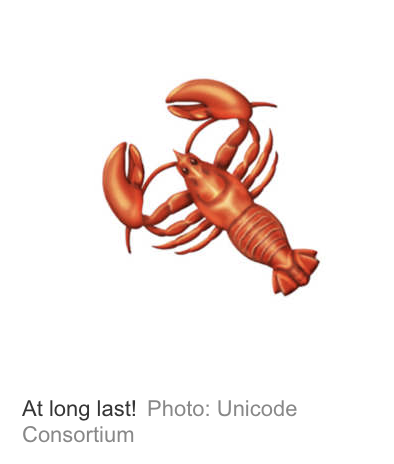 But I don’t watch much TV at all these days like I don’t obsess about emojis – even the new lobster version to complement my lobster fishing hobby. Too much reality to experience, I suppose.

There is a super cool website called Vacant New York that is tracking Manhattan vacancies. 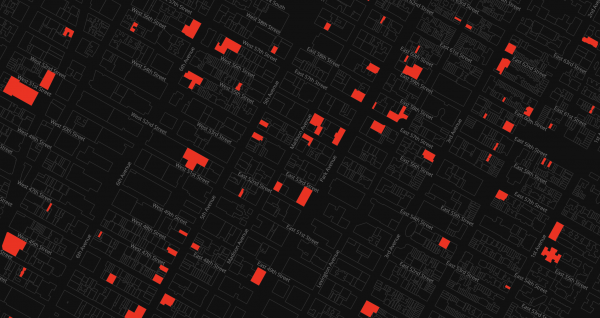 I absolutely loved all the excitement of the Falcon Heavy rocket launch (who names a rocket “heavy”?) that placed the first car into space. The live feed, the spaceman dummy, the fact the car was an actual street-ready off the assembly line car, etc.

One thing though – I had always assumed the intense heat and intense cold, depending on what side of the earth you were on, would destroy any thing unless it was protect by special materials – that a regular car like a Tesla would see its materials crack, burn up, melt compress, etc. But that’s not the case. Amazing!

The last photo (provided by SpaceX) of Starman as Elon Musk’s red Tesla heads off into space. It overshot Mars and will spend millions of years heading outward without a battery charge. 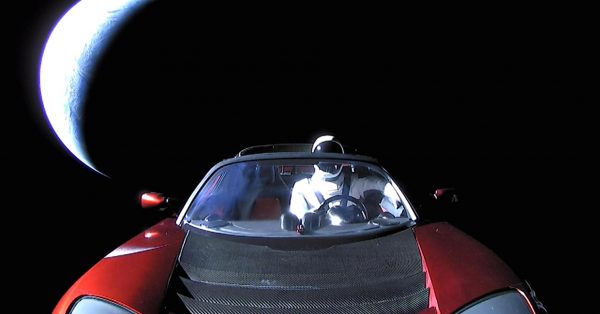 Either way, they are both misleading narratives (i.e. lies) to help the many in the AMC industry rationalize not having to pay the market rate and lobby their Congessional representatives.

It has always been challenging to find rural appraisers and it is no more difficult now than it has ever been. The reason it has always been a challenge was economics. One appraiser covering a wide area with a thin dataset with the client forcing them to conform with “average fees” and average turn around times. This proposed solution allows lenders to lend on properties where no neutral valuation was established. If this passes, I may consider buying a rural home and then refinancing it for 100 times what it is worth – no one needs a pesky appraiser nosing around. What could go wrong?

If you work in Rural Areas [that definition is referenced in (b)(1) below], your appraisal livelihood is threatened by this pending bill in Congress.

This bill, if signed into law, will allow lenders to bypass appraisals for any property with a ‘transaction value’ of $400,000 or less (this is moving the de minimus goal post) if the lender was unable to find an available appraiser to complete an appraisal “within a reasonable amount of time” …. that time frame apparently as determined by a regulator agency with jurisdiction over the lender. The bill shows ‘exceptions’ to this as per other laws.

Appraisers working in rural areas who are affected by this bill should IMMEDIATELY start communicating with your state Senator. Plus, you should continue to monitor the bill process in Congress.

A hearing was held on 1/30/2018 by the Committee on Banking, Housing, and Urban Affairs. The web site does not show what action was taken at this hearing, or the current status of the bill.

The text of the portion of the S. 2155 bill affecting EXEMPTIONS FROM APPRAISALS IN RURAL AREAS: (I have added red type and underlines to key points – although the Yahoo forums won’t display this) 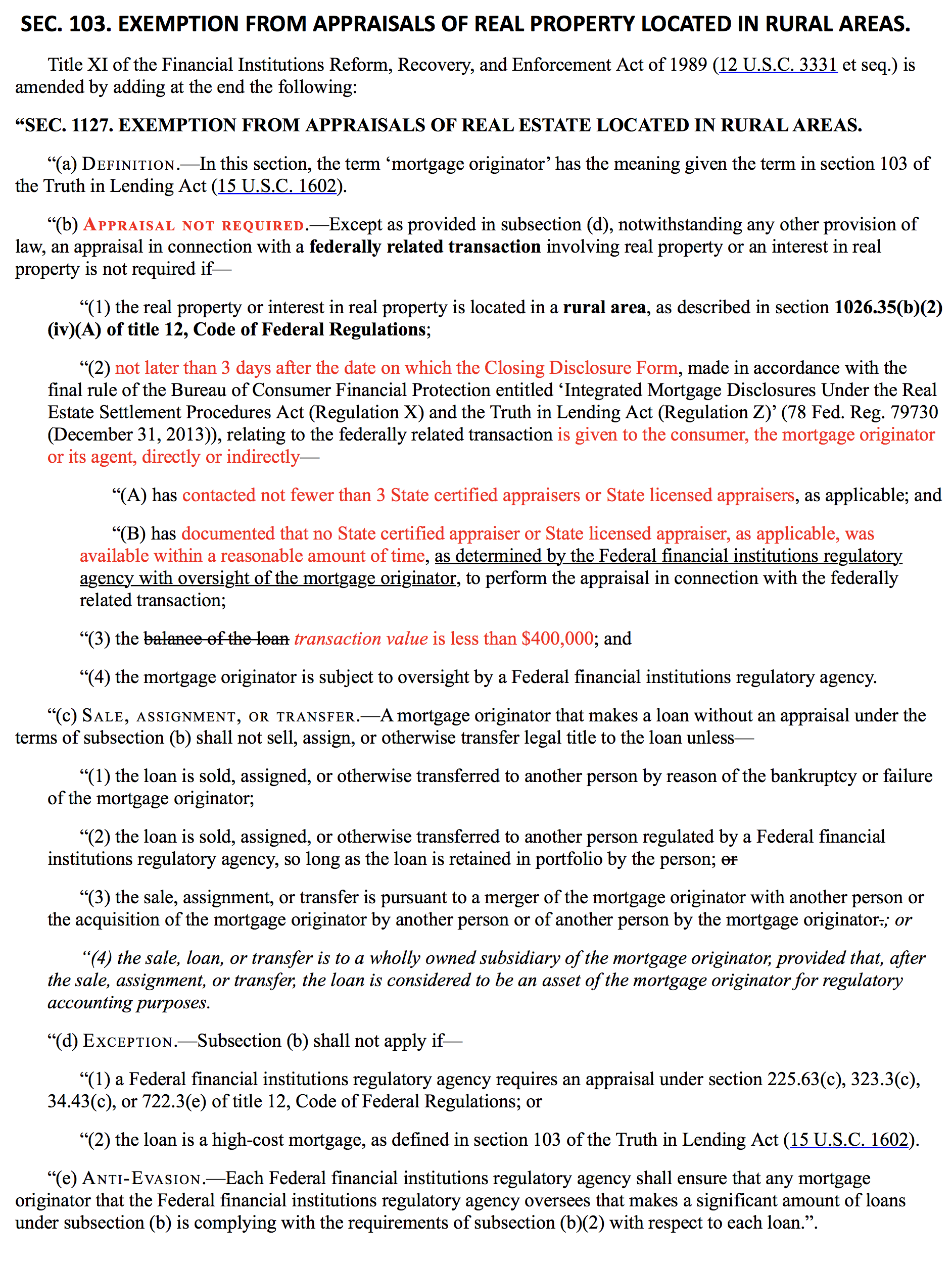 Housingwire’s new issue focuses on valuation – and has as of late – consistently included the appraiser vantage point in their coverage. Thank you Housingwire.

Lori Noble was interviewed by Jacob Gaffney in the current print version, conducting a Twitter interview. Way to go Lori! 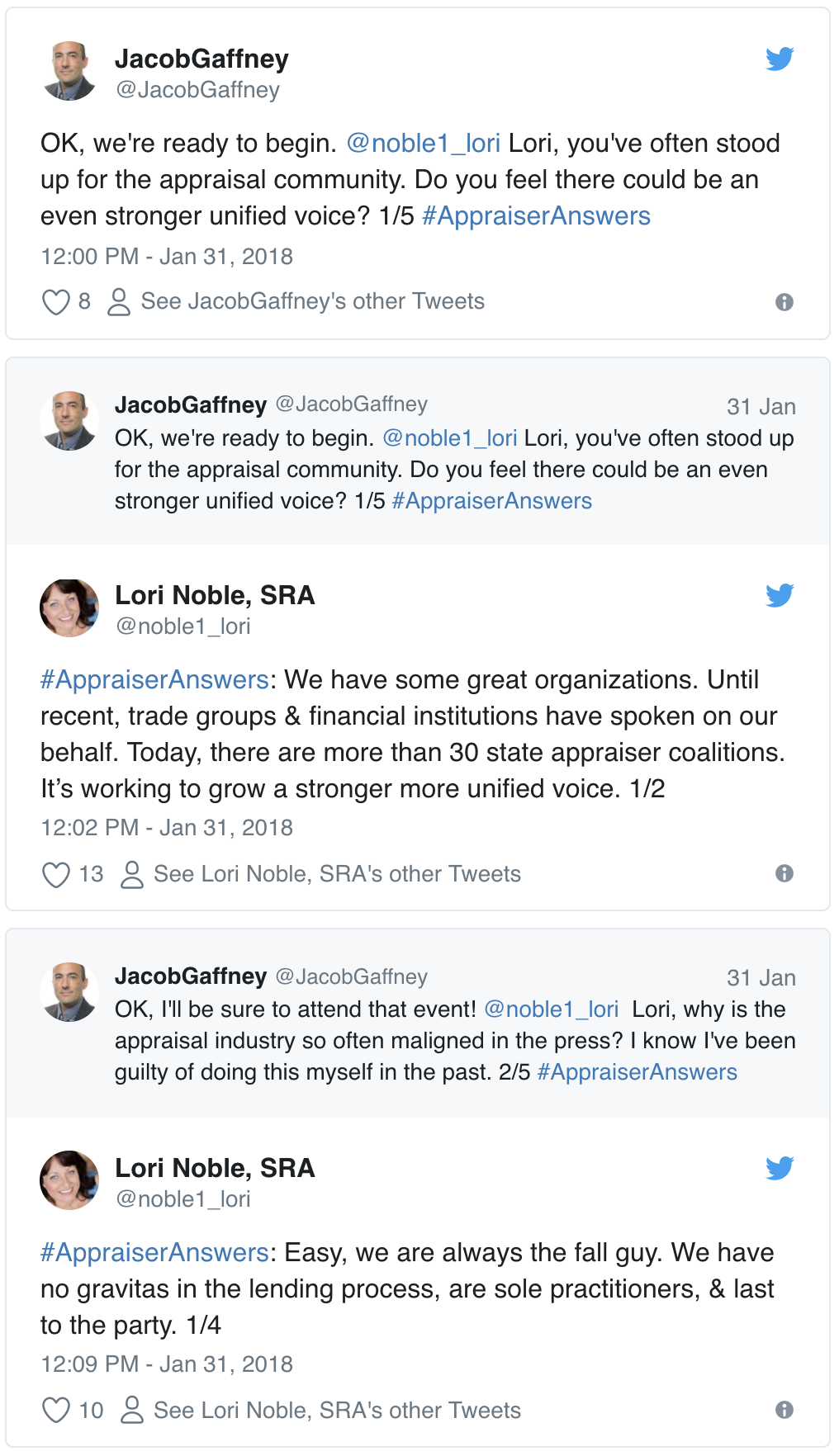 Here is the summary of changes from the Appraisal Qualifications Board of The Appraisal Foundation. [PDF]

While I do not disagree with this action, let us be clear that it in no way solves the challenge of attracting new appraisers into the profession. The problem is purely economic and in the residential arena, the problem sits squarely on the shoulders of most appraisal management companies. By many AMCs taking 50% to 70% of the appraisal fee paid by the mortgage applicant, the financial incentive to join the profession is eliminated. Who can afford to work below cost? Oh, and REVAA pushes to hide the breakout of the fee to the consumer so they won’t know that their payment goes toward the administration the appraisal process and not to the person estimating the value of their most important asset.

Economics matter. Respecting the forces of supply and demand matter. Whats the draw for a new appraiser if they can’t make ends meet but the consumer has no idea this is happening? 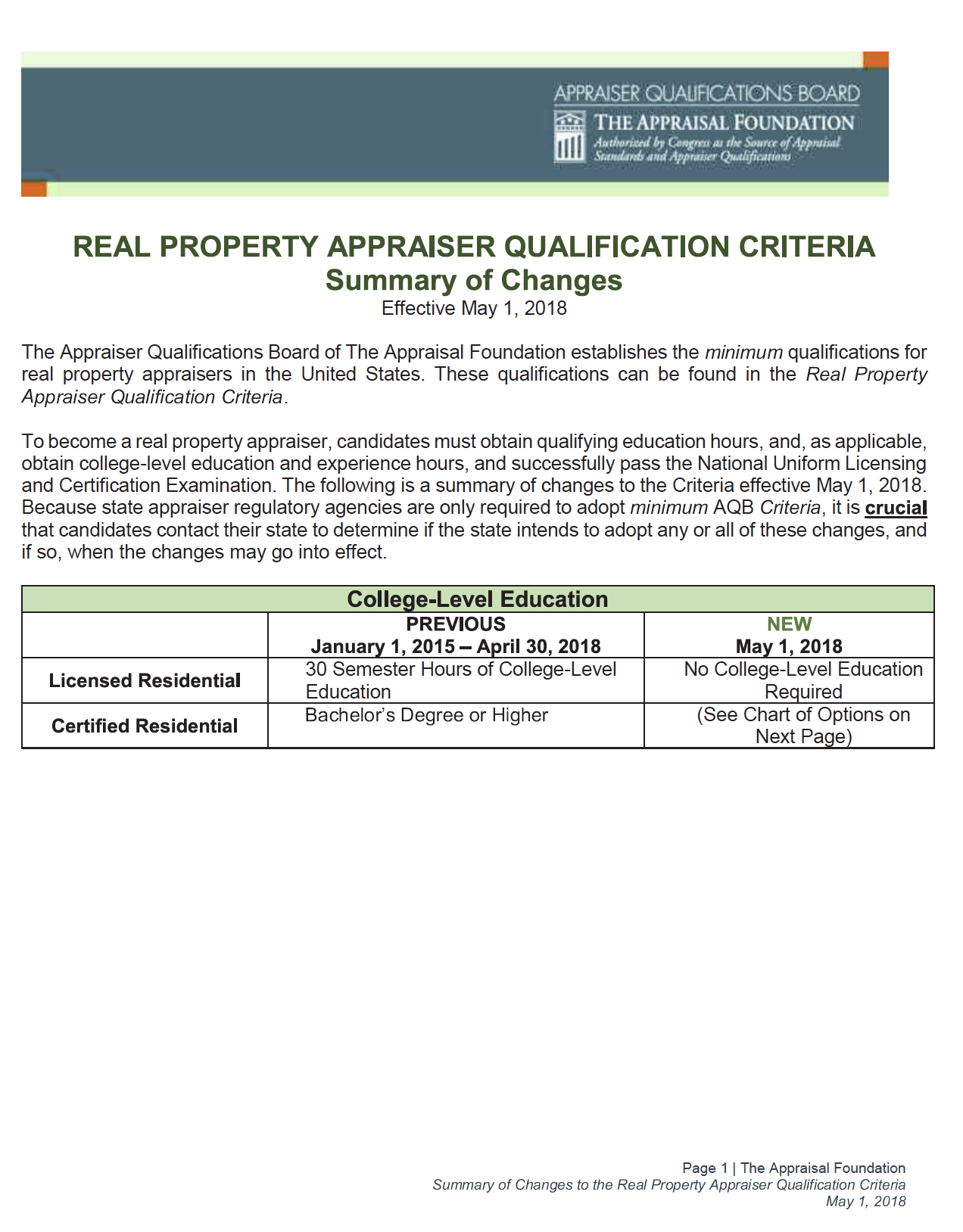