Spocking Fives for Housing To Live Long and Prosper

And you thought the weakening Canadian housing market was of great concern? (For the record, my politics are Star Trek over Star Wars any day):

Scrolling The Most Expensive U.S. Residential Sale In History

I plotted out all Manhattan residential closed sales since 2008 through January 2019 to provide some context to how much of an outlier the recent $238 million luxury condo sale was. I’ve had a heck of a time converting my excel chart into a format to display on my web site so I resorted to making my first screencast video. I did it on the fly but it really helps illustrate how out of context the recent $238 million sale actually was.

My solution? Make a screencast video.

To watch this, first, pack a lunch. Then, click here or on the snapshots below of the top and bottom segments of the tall chart to play the video.

Then relax and watch me start scrolling. It provides some useful context and is pretty cool despite the poor audio quality: 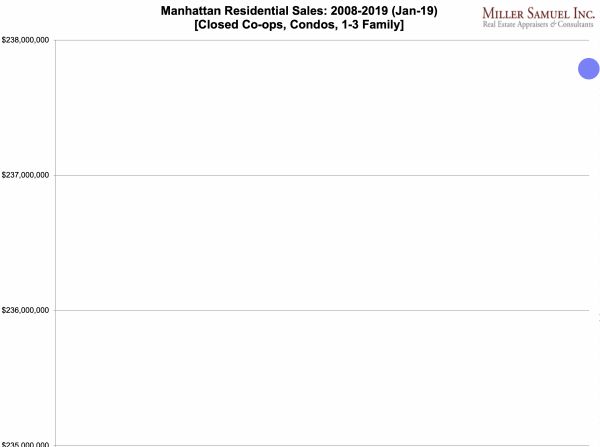 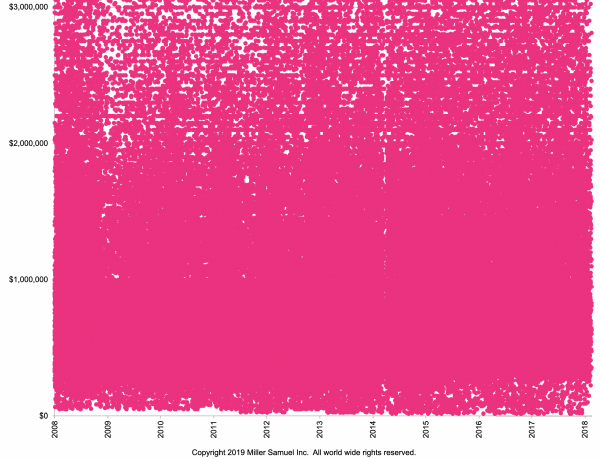 This Week in Aspirational Pricing: $50 Million Will Get You The Most Expensive Miami Sale in History

If one record wasn’t enough, the highest price paid for a residential sale in Miami-Dade County just clocked in at $50 million (same Douglas Elliman brokers as the $238 million condo sale in Manhattan).

Just as I get too jaded, another record makes me marvel at how far all this is from mere mortals like me. Here’s what the house looks like from the Miami Herald story:

As the Talking Heads, one of my favorite bands, once sang…

There was a good story in 27east about how the Hamptons era of heavy building has come to an end. Supplemental metrics were extracted from our Hamptons research in the Q4-2018 Elliman Report: Hamptons Sales.

This leveling off of permits reminds me of the period leading up to the financial crisis.

Developers on the South Fork have been busy building in recent years. As a result, the number of homes on the high end swelled, and space available for large construction projects has become limited.

Here’s a chart on building permit trends and revenue growth from the piece. Many towns and villages rely heavily on the revenue that development generates. 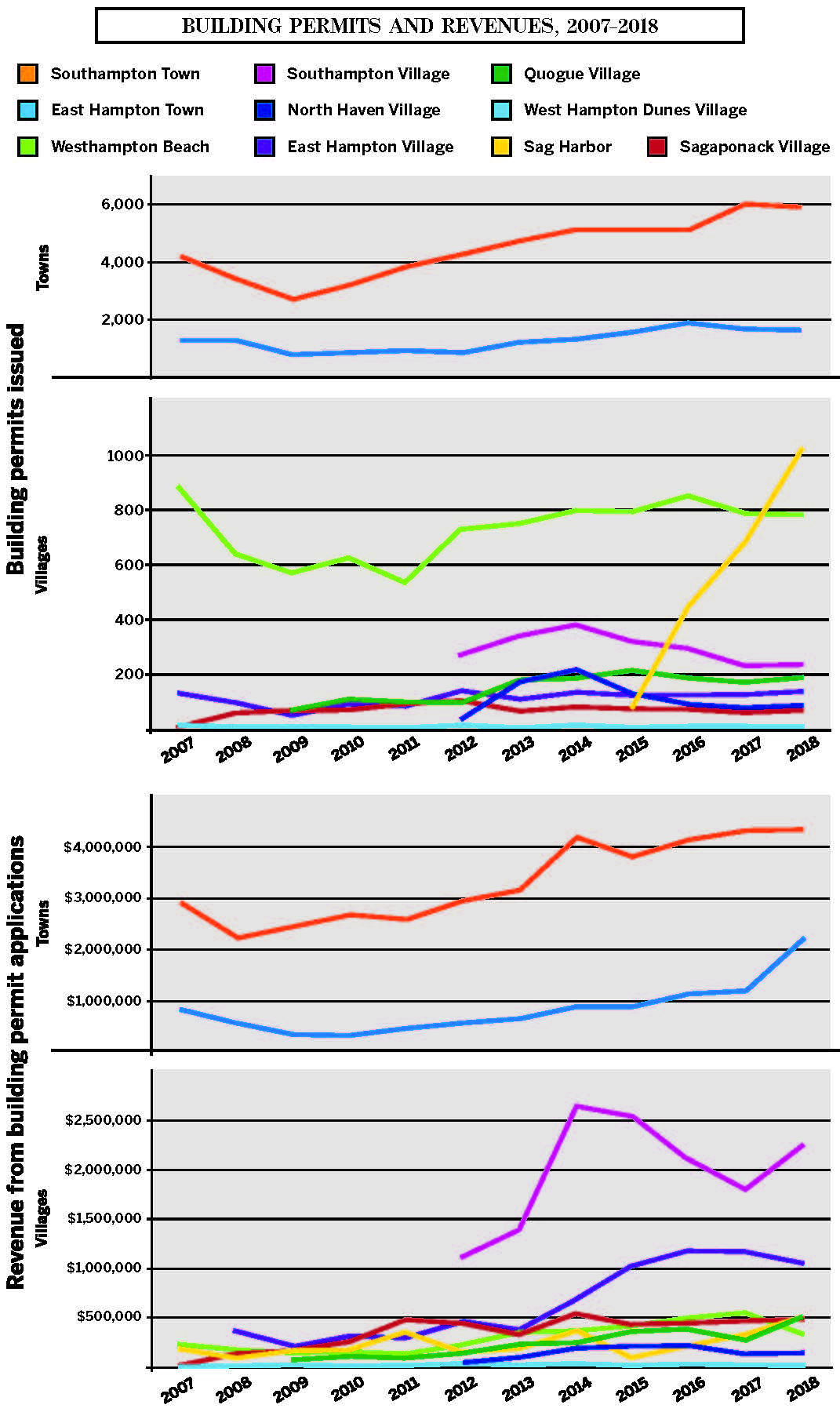 How The Mortgage Brokerage Industry Sees The Financial Crisis Legacy

For me, the Mozilo interview at the conference was somewhere between fantasyland and a farce. Chrisman lobbed up softball questions about Mozilo’s background and the rise of Countrywide. Nowhere was it mentioned that the mortgage company was seen by many as the “epicenter” of the 2008 mortgage crisis, issuing millions in “liar loans” homeowners couldn’t afford.

The most telling (and chilling) part of the interview was this. Mozilo said of his former company:

“I loved the changes you make in people’s lives. I approved 80 percent of the loans my underwriters rejected”

No wonder we are still in the “hangover” phase of the financial crisis. How incredibly irresponsible. In fact, Mozilo was given a standing ovation at this event.

My favorite chart of the week. I whipped this up before a presentation yesterday. The inventory coming off the market above $3 million represents the clearing of “dead wood” or overpriced inventory that the seller has finally realized is unsaleable at that price. The surge in supply below $3 million represents the slowdown in that market (it’s still moving faster than luxury) is allowing supply to rise sharply. At first this was explainable by rising mortgage rates which are more impactful to the starter market, but rates are at their lowest levels in 9 months. Uncertainty rules all price levels right now. 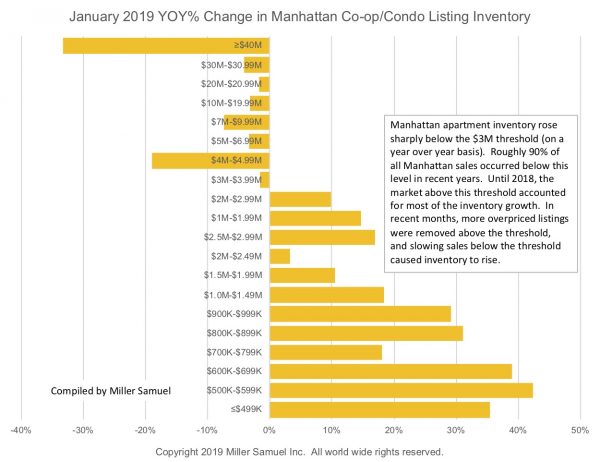 The Letters Came Pouring In Just In Time

As the comment period on the regulatory rule change that would raise the de minimus from $250,000 to $400,000 to require a certified appraisal of the collateral for a mortgage, there was an inflow of position letters on the insanity of this rule change. It is important that appraisers read them and understand what is at stake here.

‘The Network’ Letter – Peter Gallo and the 30 State Appraiser Coalitions put their money where their mouth was and hired the best law firm to cover key appraisal industry issues of the day: CONSTANTINE CANNON LLP. This letter has been disseminated across the industry and can be used not only against this rule change but as an “evergreen” summary to ensure the accuracy of the appraisal industry’s narrative. That last point is key as the appraisal industry has shifted to a grassroots effort after being bludgeoned by REVAA (the AMC trade group), the mortgage and banking industries.

Incidentally, the ABA (American Banker’s Association) liked the rule change and submitted their letter at the end of the day of due date.

Interestingly their letter claimed that “The evaluation would provide an estimate of the market value of the property, but would not be required to be prepared by a state licensed or certified appraiser, and would be less detailed and costly than an appraisal.”

Does this evaluation mantra sound like what AI National has been saying for a few years now? Strange.

‘NAR’ Letter – The National Association of Realtors was very direct about the misleading narrative the regulatory agencies are using to support the rule change that blames costs and turn time – which is completely fabricated by institutions that hate appraisers – i.e. ABA who likes the rule change and AVM owners (often AMCs) who are pushing for their product to be the status quo even though their lack of accuracy is embarrassing. Here is what their powerful letter – based on actual data – showed:

Assuming the median home price of $250,000 would have a median appraisal cost of $450, the appraisal would be 0.18 percent of the total transaction cost – hardly approaching a “burdensome cost.”

When asked about ease of obtaining an appraisal, 67 percent of REALTORS® felt it was “easy” or “very easy” to get an appraisal and only one percent noted it being “difficult” or “very difficult.”

Given the fact that consensus has a 70% chance of a recession coming in 2020, why would Treasury, FDIC, OCC and the Fed use bogus claims as evidence to remove oversight from our industry designed to protect the consumer and taxpayer? We’ve heard this song before.

As stated in Table 2 of the proposal, should the threshold be raised to $400,000, 72 percent of regulated transactions would be exempt from Title XI appraisal requirements. That means over 7 in 10 Americans would be deprived of an objective, impartial, and independent opinion of value regarding the single largest purchase many of them will ever make. To say this proposal runs counter to consumer protection principles is a wild understatement. The proposal, if adopted, will irreparably harm consumers who frequently have little to no real estate knowledge, and therefore rely on a system of checks and balances to ensure they are not entering a purchase well above the value of the collateral.

Letter Summary – My thoughts on why these letters were necessary were because:

Let’s hope that Congress will call on the head of these agencies to testify very soon.

Why I Don’t Call Out The Appraisal Institute As Much As I Used To?

No, it’s not because they have proclaimed 2019 as the Year of the Residential Appraiser. Coincidentally, this is also the Chinese “Year of the Rat.”

No, not any of that.

Simply put, it is because nothing has changed in their culture and their priorities to its membership over the past year and therefore they are no longer relevant nor are they considered an industry leader anymore having enjoyed and earned that status in years past.

Why waste time and energy on something the industry has already decided?

The work of the 30 state coalitions who filled the void because of AI National’s lack of national leadership demonstrates how marginal AI National has become as a trade group. For an example of their institutional dishonesty, they launched a residential committee nearly two years ago and nothing has been presented or shared to the public. A few of the members appointed are people I know personally who are good people that remain in love with the soul of an organization that died years ago and who very much want to salvage it. When that residential committee was formed and I professed to be skeptical as to the intent (to placate AI residential members who had some loyalty remaining so they would continue paying dues) and as time passed, AI National effectively shut it down by inaction. This what happens when an organization’s leadership isn’t accountable to its members and lives in a bubble.

After all, this isn’t rocket science when you apply critical thinking to the problem.

So to those who challenged me directly on my cynicism 2 years ago, its time to apologize. A nice private email would suffice.

Oops, I believe I just called AI National out again. Sorry about that.

I hate Brutalist architecture so I thought I’d ask you to watch this.