Although I believe I’ve shared other iterations of these, they never get old (pun intended) and they remind me of how rich in character New York City is.

I’ve been the author of the expanding Elliman market report series for Douglas Elliman Real Estate since 1994 and the most recent report additions, which began during the pandemic are the New Signed Contract reports for regions in New York, Florida, Colorado, and California. I’ve always been so grateful that a large national firm like this enables me to produce neutral market insights because they want to enable the consumer to make more informed decisions.

All of the U.S. regions we cover have shown phenomenal growth after their respective regional lockdowns ended but Manhattan has been the laggard until now.

Here’s a cool chart by Bloomberg on the contract surge (in two color versions!): 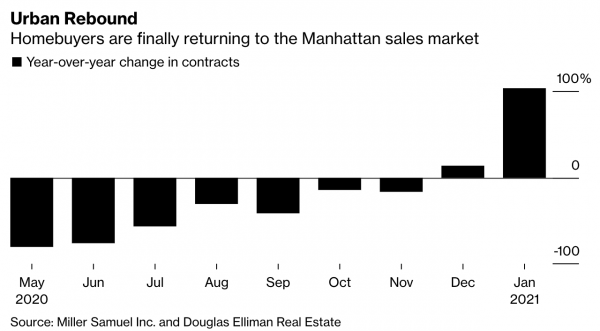 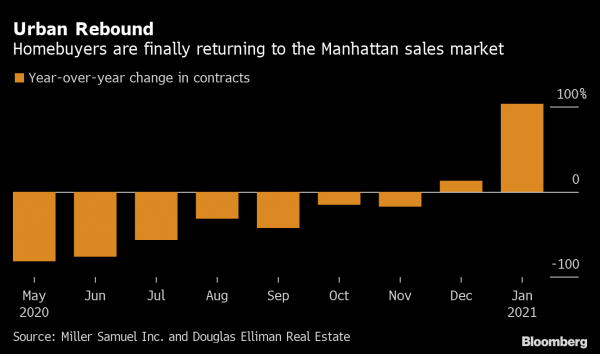 And most importantly, interest in this story made it the most emailed article of the day by the ±350K Bloomberg Terminal subscribers who love their Manhattan real estate.

Brooklyn
“New signed contracts for all three property types combined rose sharply from the same period last year for the fourth straight month of increases. Market-wide new signed contracts for January nearly tripled from the prior year. New listing inventory has continued to expand each month annually since last June, keeping up with demand.”

Here’s A Better House Than The International Space Station

There’s a crazy looking listing featured in the Wall Street Journal today and the article title tells it like it is: To Malibu and Beyond: A Home That Looks Like the International Space Station Asks $20 Million

The pictures are insane. My basic view of this type of property as a valuation challenge is discussed in the piece – basic thinking is that its uniqueness is limited to a very small pool of buyers which can restrain its potential value – that this uniqueness is probably not an advantage. But I have no idea how this relates to the asking price.

From the WSJ story: 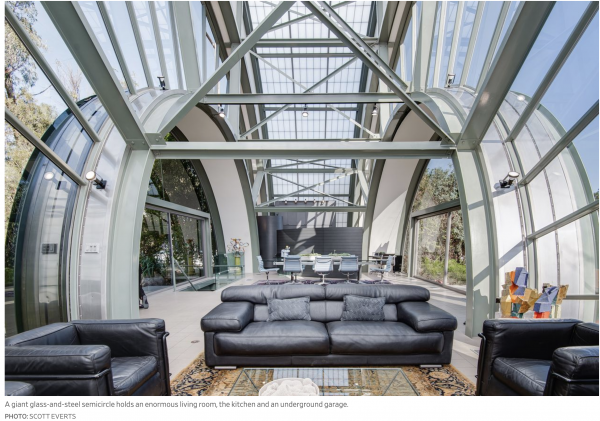 Here’s the google view – its living room looks like a jet engine sideways on the ground, partially buried. 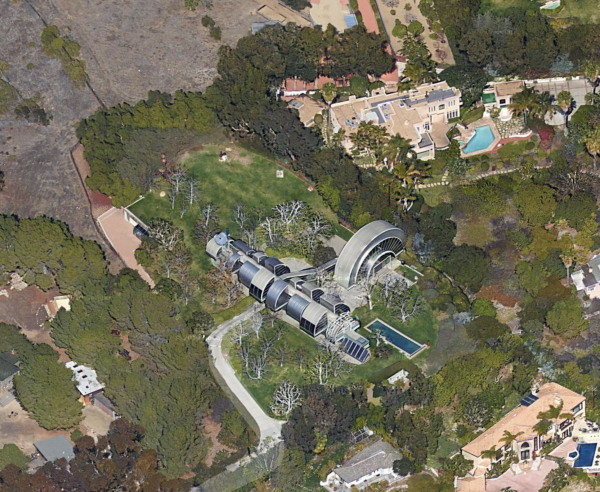 Spectrum NY1 News does a good overview of the current state of the Manhattan mega-development, Hudson Yards. This was a project that was conceived of about a dozen years and came to market as the super-luxury space was unraveling. Throw in a global pandemic and it gets dire. As developers go, Related is one of the best-managed developers I’ve seen over my 3+ decades in the Manhattan market with one of the best track records around, but it’s going to be difficult.

I’m only in the piece for a nanosecond and my company’s name is spelled incorrectly, but hey, it is always fun to do these and this was a well-done segment on Related’s challenge. 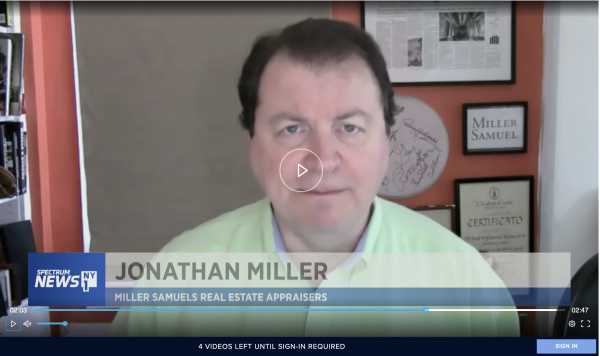 Here’s a recent piece on the state of the New York City rental market.

Gotta love my side by side video with @nancyfwu "Manhattan will become a more accessible place to a wider range of people making a broader range of incomes" NYC residential rents will take years to rebound, experts say via @MackenzieWKing @fox5ny https://t.co/tqIQ1q8xCM pic.twitter.com/aiYvo0EQl7

A Preliminary Look At The Manhattan Decade Report – Sales Were Down YOY in 2020, Obviously

The top-level results of the report were released but the full report will be published online next week in a 60 pager!

Even Supertalls Can Have Superproblems 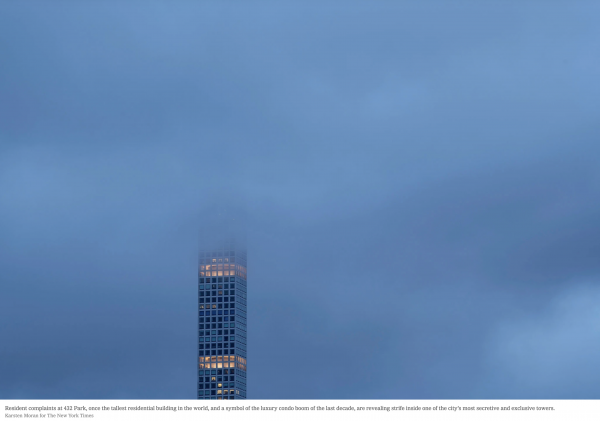 This week, a crazy story broken by the New York Times: The Downside to Life in a Supertall Tower: Leaks, Creaks, Breaks talks about the challenges facing one of my favorite Manhattan supertalls, 432 Park Avenue. The article title almost got me to pronounce “Breaks” as “Breeks.”

We’ve appraised units in the building since it obtained a TCO circa 2016ish. I’ve done a few myself with floor levels as high as in the ’80s and my firm has done a few on floor levels in the 90s. The views are spectacular and I found the apartments to be unusually quiet during my own inspections.

But this story talked about so much more. It reminded me of a story about mold litigation at 515 Park Avenue, one of the best new buildings of its time, that became temporarily nicknamed “The Mold Building” but the litigation and story faded from memory very quickly as I suspect this will too.

The top-level results of the report were released but the full report will be published online next week and shared in Housing Notes next week! I’m running behind this market report cycle.

The ‘Fleeing The City’ Narrative Is Getting Boring. Here Are Some New Ways To Think About It.

There is a new evolving narrative of what cities will be post-pandemic and this will apply to housing. This conversational change is happening because housing market laggards like Manhattan are actually waking up (but at lower prices).

Recent thought pieces and articles on the outlook for Manhattan and cities.

Here’s the middle of the road argument made last fall:

Here is the doom and gloom argument:

Change In The Narrative: Urban AND Suburban Housing Sales Markets Thrived During The Pandemic

As it turns out, the “suburbs are the future and cities are dead” narrative was wrong at least as it pertains to home sales (not rentals). I think the initial weakness of Manhattan inferred this narrative. But instead, it was late to the party in the context of sales activity. Manhattan sales market is coming back sales-wise as discussed earlier. Ridiculously low mortgage rates will do that. Declining housing prices will also do that. 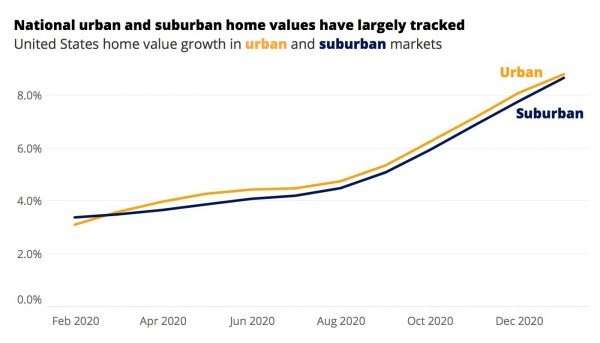 Richard Florida‘s thread breaks it down:

In another monthly new signed contract report we author that was published by Douglas Elliman this week, Palm Beach County continued to be a stand out market.

Demand was even greater in the market’s richest corners. Contracts quadrupled for single-family houses priced at $800,000 to $999,000, and more than $1 million. 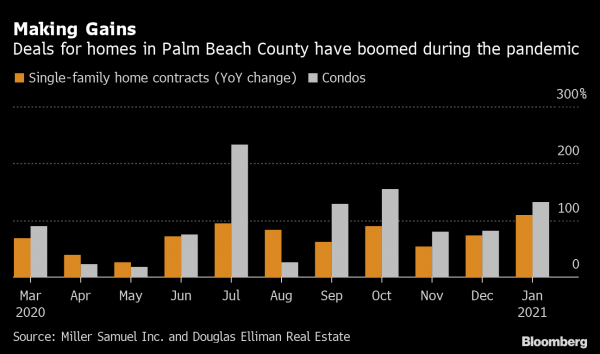 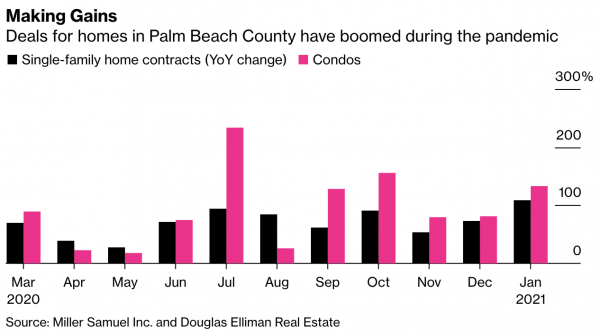 Crains New York Business named me as one of the NOTABLES IN REAL ESTATE for 2021. Its always appreciated and fun to be recognized. 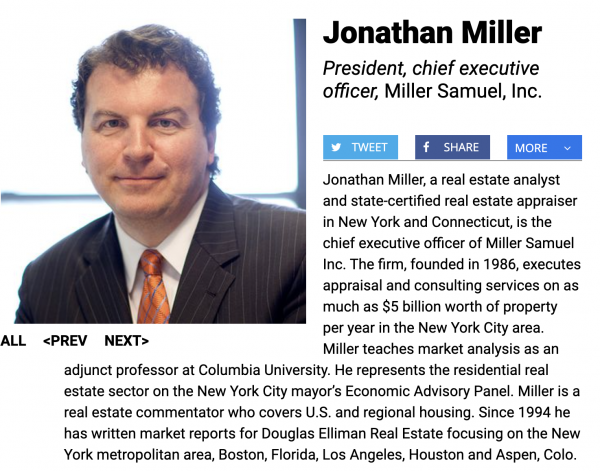 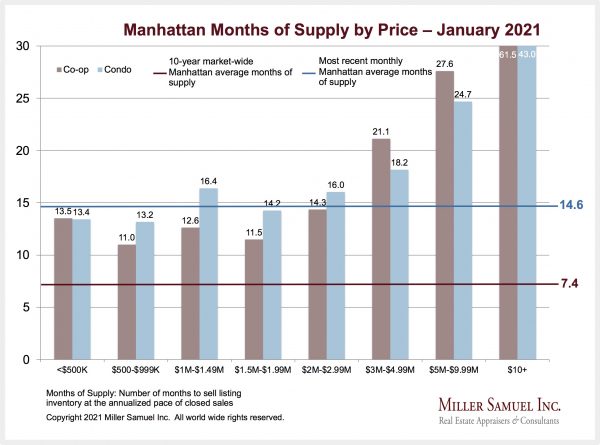 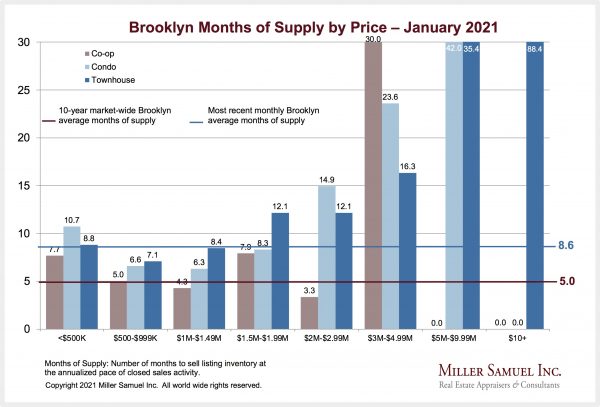 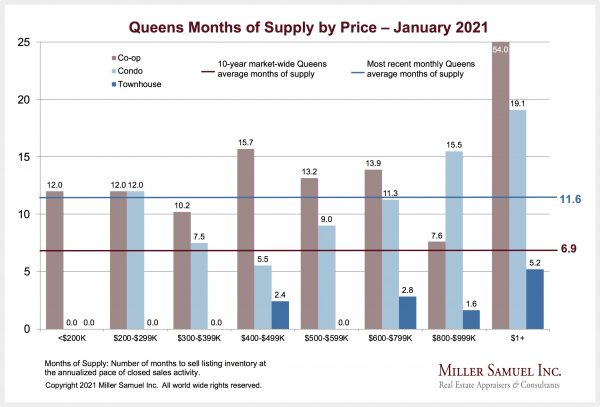 Register for this upcoming FHFA event!

FHFA is hosting a public listening session as part of a Request for Input (RFI) on appraisal-related policies, practices and processes. The individual input and feedback received in response to the RFI will be considered by FHFA to determine the necessary modifications needed to ensure Fannie Mae and Freddie Mac (the Enterprises) operate in a safe and sound manner.

This is how we get heard!

Phil is back for the new year after dealing with a wild 2020! He covers the “Wall Street Bets” drama and breaks down an appraiser’s perspective of what could be a “deep seeded reckoning” shared by the hive-minded day traders. Did this start in 2008? Are some of this traders “The Children of Foreclosure”? Enjoy the show!!!

Get Ready Jim, Appraiserville will be waking up next week

As you can see by the earlier content, there is a lot going at the moment outside of my appraisal world. But don’t worry, there will be lots to share over the next few weeks.

To get the answer to whether the groundhog saw its shadow or not was live-streamed by ABC news and watched by 152K people. Seems like society is making a statement, no?

And then this, because it made me feel so good on a Friday afternoon.

Every CEO, company founder and entrepreneur should watch this video:

Elon Musk when he proved everyone wrong pic.twitter.com/tsywvc4HCh