While Seeking More Livable Housing Space, Balconies Can Be Overrated

It’s a good thing that housing with a water view is always in demand.

This is a spectacularly written article on the MDL star real estate broker Ryan Serhant in Curbed this week. I tweeted the story and had this question:

We’ve heard the drumbeat since March with phrases like “fleeing the city” and “the exodus” that have framed the result as “cities are dead.” That narrative was born last March and April and has remained in place essentially ever since. But it’s not quite right.

There was a fascinating study by the Cleveland Fed Did the COVID-19 Pandemic Cause an Urban Exodus? that looked at U.S. city and suburban migration patterns.

The reason for the birth of the narrative:

Initially, the urban exodus stories reported that people were afraid of contracting the novel coronavirus in elevators and subways. Then the narratives suggested remote work had freed office workers from long commutes, allowing them to relocate. With both remote workers and students at home full time, a desire for home offices purportedly rose, and low interest rates made buying a larger suburban home attractive. Urban amenities such as restaurants and theaters were shuttered. Later, the protests sparked by the killing of George Floyd and others were cited for motivating some urban residents to leave. Most major cities experienced increases in violent crime during 2020, and crime rates have historically predicted migration changes. The proposed and enacted cuts to police funding were also cited as a reason to leave by some people who feared that crime would increase further.

My take from the study – I think about net-migration as the difference between people coming in versus people leaving. The problem is that until people feel safe, they are less likely to come in and in a growing city, that should be a bigger number. The vaccine distribution over the next 1-2 years is a solvable problem and inbound may normalize faster than outbound. Excess outbound migration is a deeper challenge. The difference between the two is incredibly lopsided right now and won’t resolve itself until the vaccines are at critical mass. 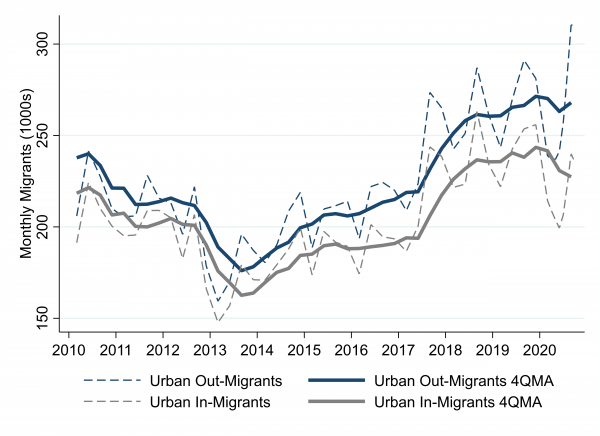 For New York City, the new inbound will be heavily reliant on the tech sector who are also scaling up their footprints in urban markets across the U.S. Plunging rents are drawing younger residents which is who tech tends to hire and will likely continue despite remote work growth as discussed in this Wired piece: If Work Is Going Remote, Why Is Big Tech Still Building?

One, Because big tech depends on young workers who are drawn to superstar cities and need space.

And two, this means the future of superstar cities shifts more towards tech and away from FIRE.

There is a lot of stat junk out these days by moving companies on the migration story. Think of it like a real estate broker doing a market report on their own sales activity. Doesn’t work for you, right?

Now that I’ve teased you, here are a few examples.

I provided Newsday with median sales price by East End Hamlet for Q4 2020 and Q4 2019 and the results are fascinating. 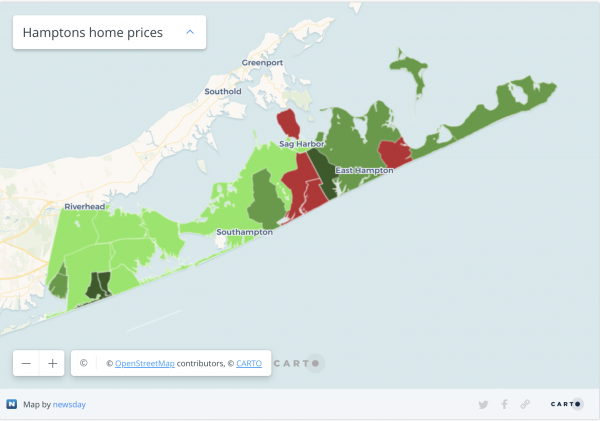 You need a subscription to query the tables. 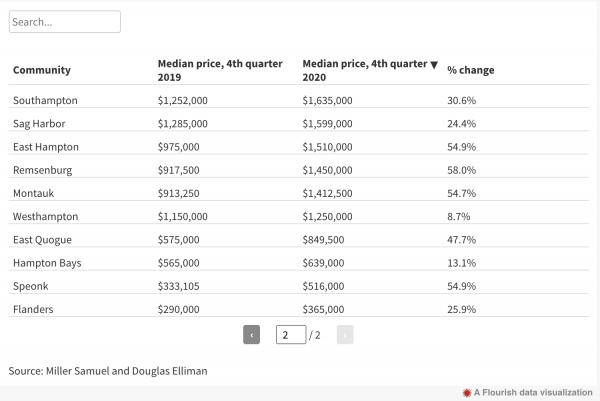 They also released a piece covering the North Fork and data table.

The 2021 Economy Is Starting To Look A Lot Better

Fannie Mae issued quite a startling upbeat forecast for 2021: U.S. Economy Expected to Expand at 6.7 Percent Clip in 2021

The combination of vaccine adoption, companies calling people back to the office and a release of pent-up demand appears to have the potential to make the economy sizzle. I’m more worried about 2022, or even 2023 after the “pent-up” gets used up.

But I’m not fretting about inflation at this point as I’ve discussed here recently. Housing price growth is insane but as I presented previously, roaring housing prices are replaced with their rental equivalent in CPI calculations. 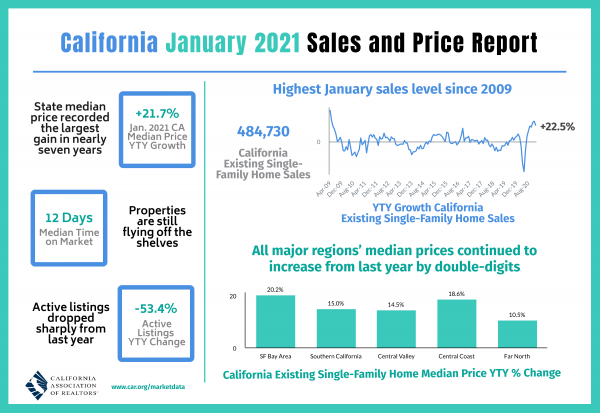 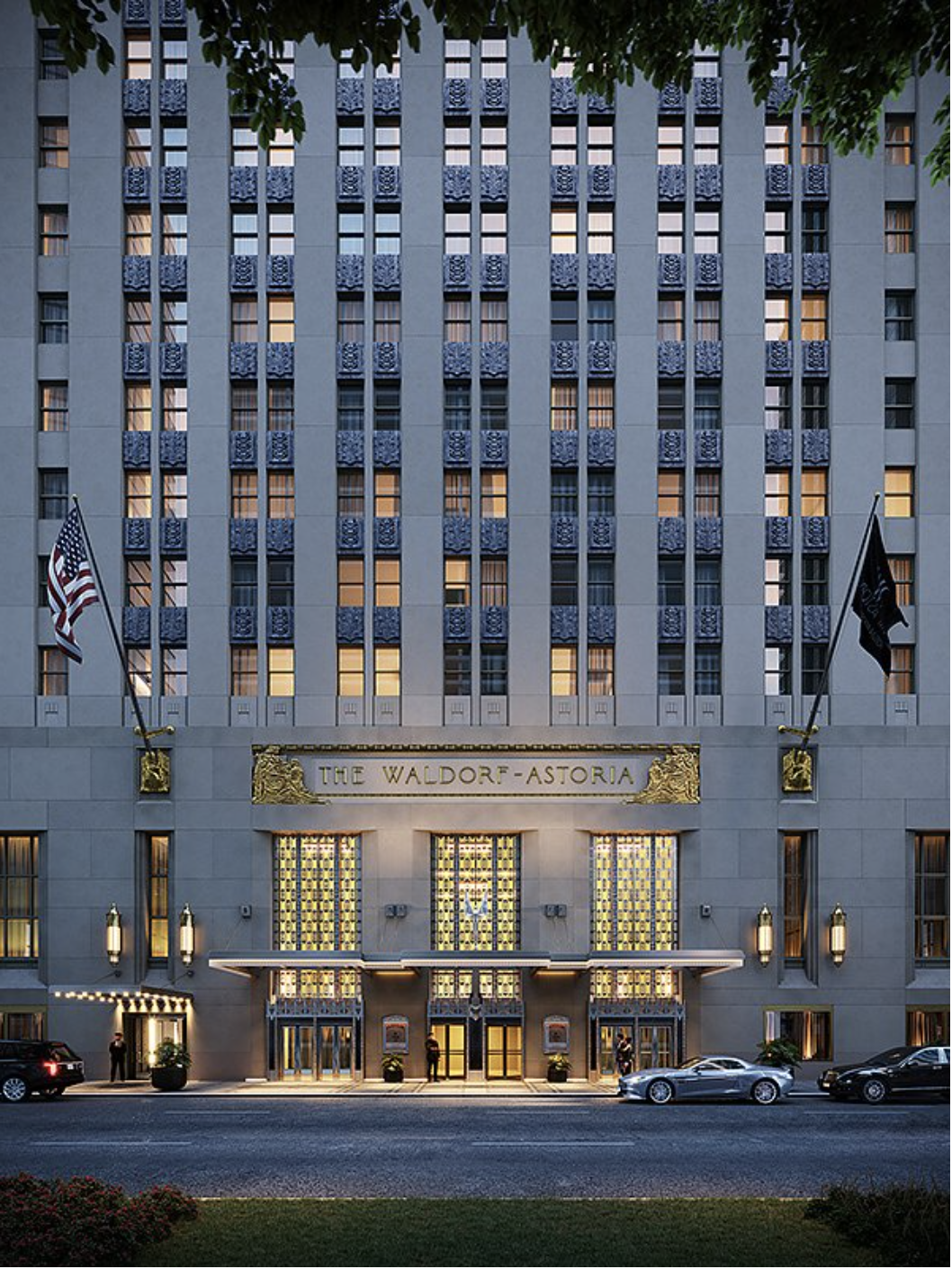 I was watching the ASB public hearing today and heard this:

First, they held a moment of silence for the unexpected passing of Scott Robinson, who was a new ASB member. It was good to see someone of his caliber – an actual real estate appraiser added to the board. Why on earth are there non-real estate appraisers on either the ASB or AQB technical boards? It is a disservice to the real estate appraisal industry who have a bullseye on their backs for state licensing, and personal or business appraisers have no place on these boards.

Dave Bunton announced that TAF would temporarily extend the current 2-year USPAP cycle another year for three years. The ASB has to vote on this change after the meeting, but Dave calls the shots, and I have no doubt the board he picked will favor it.

Dave made these points:

This change does not mean that we are going into a 3-year USPAP cycle – that’s TBD. Dave used COVID as the reason for the extension, but in reality, it is because TAF is under significant pressure on all sides to extend further out than three years.

Other alternatives to a USPAP renewal cycle change might be:

a subscription service (my bet to keep the revenue flowing in since they aren’t taking ASC grant money as Congress originally designed the system) issue the next USPAP with no end date and release them when actual changes are needed.

Dave deftly passed off the two-year cycle requirement to the states, so if the USPAP cycle gets extended permanently to three, four, or five years, TAF still gets the course revenues. Appraisers have to take the same class in the same cycle with no new information. This is the kind of thing that is wrong with how TAF thinks about appraisers.

About Dave’s mention of the GAO investigation he initiated – Dave requested Maxine Waters so GAO would beat up ASC but, in the process, conveniently neglected to include TAF as part of the appraisal system which is absurd. ITAF is the source of most industry key problems like lack of diversity, over-bureaucratization, and lack of new entrants into the profession. TAF’s GAO request was nothing more than another attempted browbeating of ASC after his bat-shit crazy letter fiasco.

However, it is good to see the USPAP cycle extended – it will help the industry reduce time wasted on TAF’s money grab. I assume it will yield mass chaos to the industry—more on this next week.

UPDATE: As already pre-ordained, Dave Bunton, TAF president extends USPAP via their newsletter 14 minutes after the webinar: SPECIAL EDITION NEWSLETTER: ASB Extends USPAP This will introduce chaos but moves the industry away from the two year USPAP cycles. I suspect there would be anarchy if USPAP returned to two years after this experiment.

I have no final thoughts!