Lets Buy A House On Bucket of Blood Street

There has been a negative information swirl engulfing our real estate lives for the past 6 months or so and it seems to be escalating including:

Last week I blogged a supplemental piece to last week’s Housing Note beatdown (this week’s fav term) on the Quicken Loans Super Bowl ad, responding to comments made by people I respect but were confused about the backlash: Contrarians React to Quicken Loans Rocket Mortgage Outrage.

I don’t really believe that QL’s Rocket Mortgage product will bring down the world’s economy as we saw with financial engineering in the last cycle. But it is a concern and unbelievable that this was the messaging they chose to go with. As Mark Twain said (paraphrased) “History doesn’t repeat itself but sometimes it rhymes.”

This was my a first post to Matrix in 2016 which was a record lapse. The combination of devoting my time to Housing Notes and that annoying thing called “making a living” got in the way. I’m also in the process of inventing more time in the day which takes up a lot of my time – will let you know when I successfully create time – and have enough time to tell you.

Like A Farmer (or Rancher): Outstanding In A Field The Size of Rhode Island

Texas is a non-disclosure state so even though this sale closed, the price remains a mystery. My friend Candy Evans of Candy’s Dirt in Dallas wrote a fascinating post on the broker for the sale: The Most Fascinating Real Estate Agent in Texas: How Bernie Uechtritz Sold the Waggoner Ranch

Here are some photos photos on the broker’s web site (click photo for more). 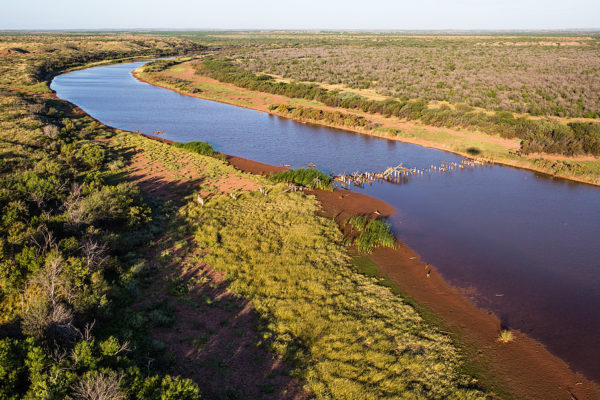 The commission on the sale is expected to net the real estate broker anywhere from $7-10 million dollars. Not bad.

But stories like these are the outliers for real estate agents. It’s tough out there. Bill McBride over at Calculated Risk shows how the number of real estate agents has not recovered since the bubble and brokers are seeing a slow bleed. On the flip side (sorry, bad pun) fewer agents mean more for those who remain. 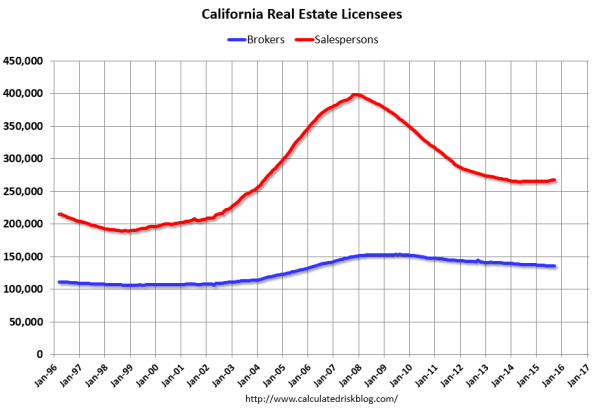 Economic Wonkiness Sort of Related To The Housing Market

Negative Interest Rates
When interest are low, or falling, that means that economic conditions are weak and the Fed lowers rates to stimulate demand. This has been the siren song for stakeholders in the housing market since the financial crisis began. But nothing galls me more than using low interest rates as a sign of a healthy housing market. Artificially low rates boost housing prices, but not because economic conditions are good i.e. fundamentals like wage growth, employment and credit access are what the focus needs to be on to make such a proclamation.

Here’s a great explainer from NYT’s The Upshot on what negative interest rates are and what they would mean to consumers.

Banks have different ways of passing the negative rates on to depositors, often framed as fees for keeping money in an account, which is basically negative interest rates by another name. People are unlikely to withdraw their funds and hide them under a mattress. But it looks as if the convenience of keeping money in a bank account is worth a small negative interest rate or fees for most consumers and businesses, at least at the only slightly negative rates currently in place.

Even former baseball starts are chiming in now:

Negative interest rates in Japan is blowing my mind

Secular Stagnation
This is becoming a popular term to explain why we are seeing so much economic weakness. As noted in The Economist a while back: Secular-stagnation theory originated with Alvin Hansen, a Keynesian economist, in the 1930s. Countries suffering from the stagnation bug are burdened with too much saving and too little investment. Hansen reckoned the slumping economies of the 1930s were doomed to stagnation by poor growth prospects, a product of slowing innovation and ageing populations.

I really enjoyed this article by Lawrence H. Summers (former Treasury Secretary) in Foreign Affairs: The Age of Secular Stagnation Most observers expected the unusually deep recession to be followed by an unusually rapid recovery, with output and employment returning to trend levels relatively quickly. Yet even with the U.S. Federal Reserve’s aggressive monetary policies, the recovery (both in the United States and around the globe) has fallen significantly short of predictions and has been far weaker than its predecessors.

Now let me get to street where I am more comfortable…

Developers Are Not Always On Right Path (or Street)

Apparently politics can determine how streets are named. At least in Staten Island.

So, as borough president, he used a little known function that was part of his responsibility: choosing new street names. And he went with “Cupidity Drive,” “Fourberie Lane,” and “Avidita Place.” Cupidity means lust for for wealth; Fourberie is French for deceit, and Avidita is Italian for greed. The developers challenged the naming in the State Supreme Court, but last week the judge ruled that Oddo was well within his rights to name the streets—so even though they’re somewhat obscured by being in another language, there’s no changing that someone will eventually live on Greed Place.

I don’t know any inside dirt on what really went on between the parties in this case but I would guess that consumers won’t care about the names to result in an adverse impact to property values.

There are far worse street names out there: 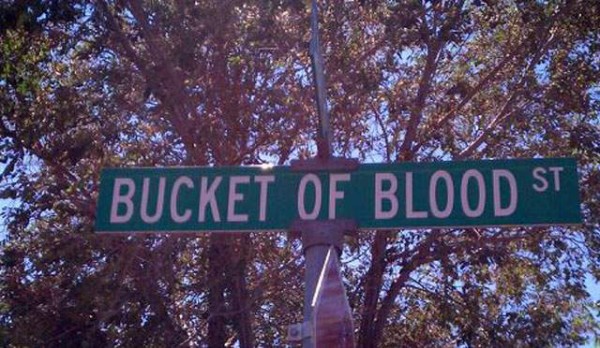 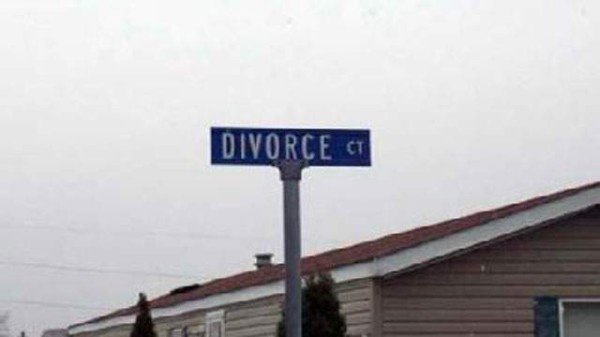 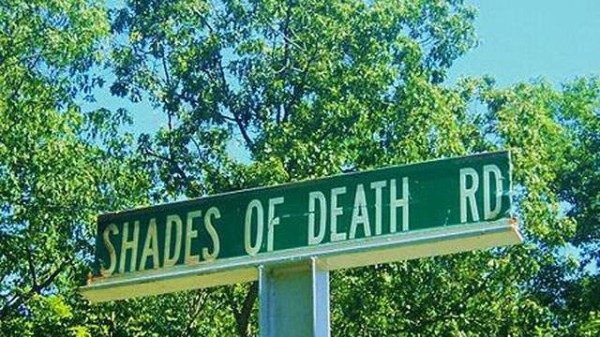 And speaking about taking that alternative path or street, JDS is planning on building the largest tower in Brooklyn, nearly double the height of the buildings nearby. 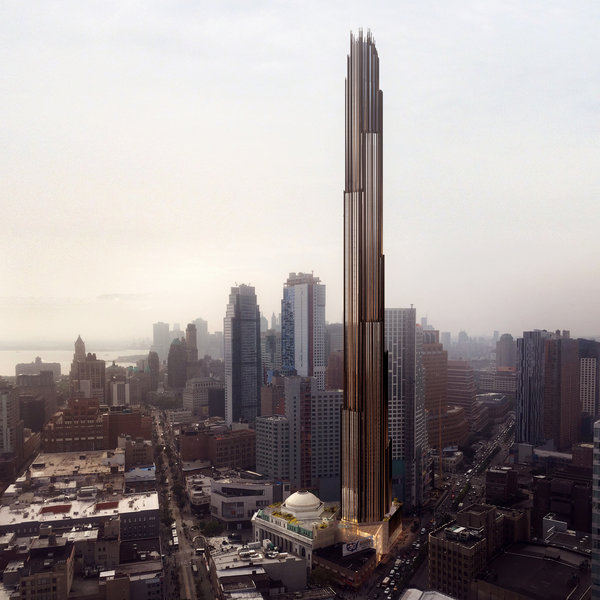 It’s going to be a luxury rental tower with high end multi-story retail at the base. I do worry about this one, not because of the height or aesthetics, but because the luxury rental market in Brooklyn hasn’t seen rising prices in more than 2 years and the overall market is leveling off. 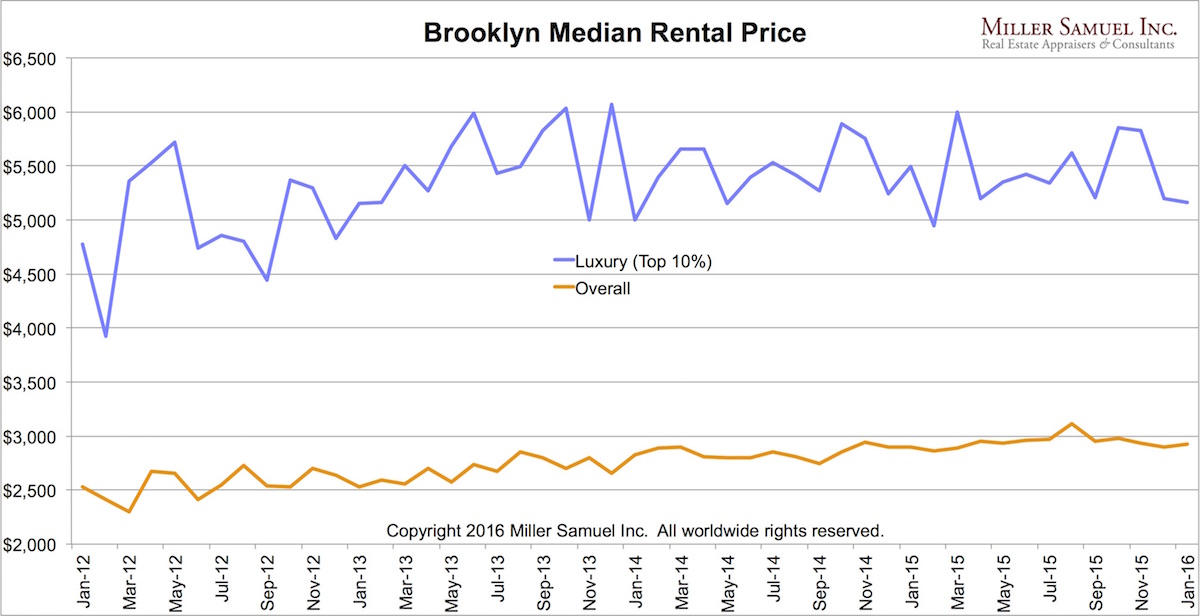 Lots of Charts: Where The Streets Have No Names

This is sort of a copout but I really want to share bunch of charts I updated from the 4th quarter on the Manhattan housing market. If I put them all together on 11×14 paper and bound them, it might make a nice artsy coffee table book. 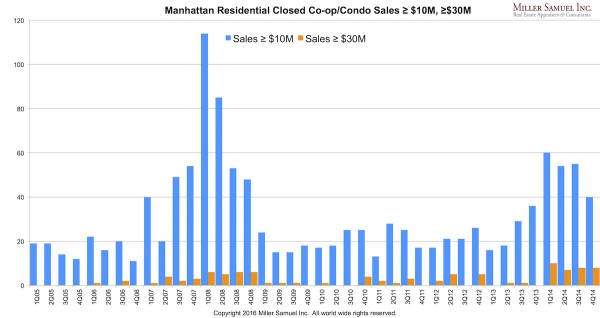 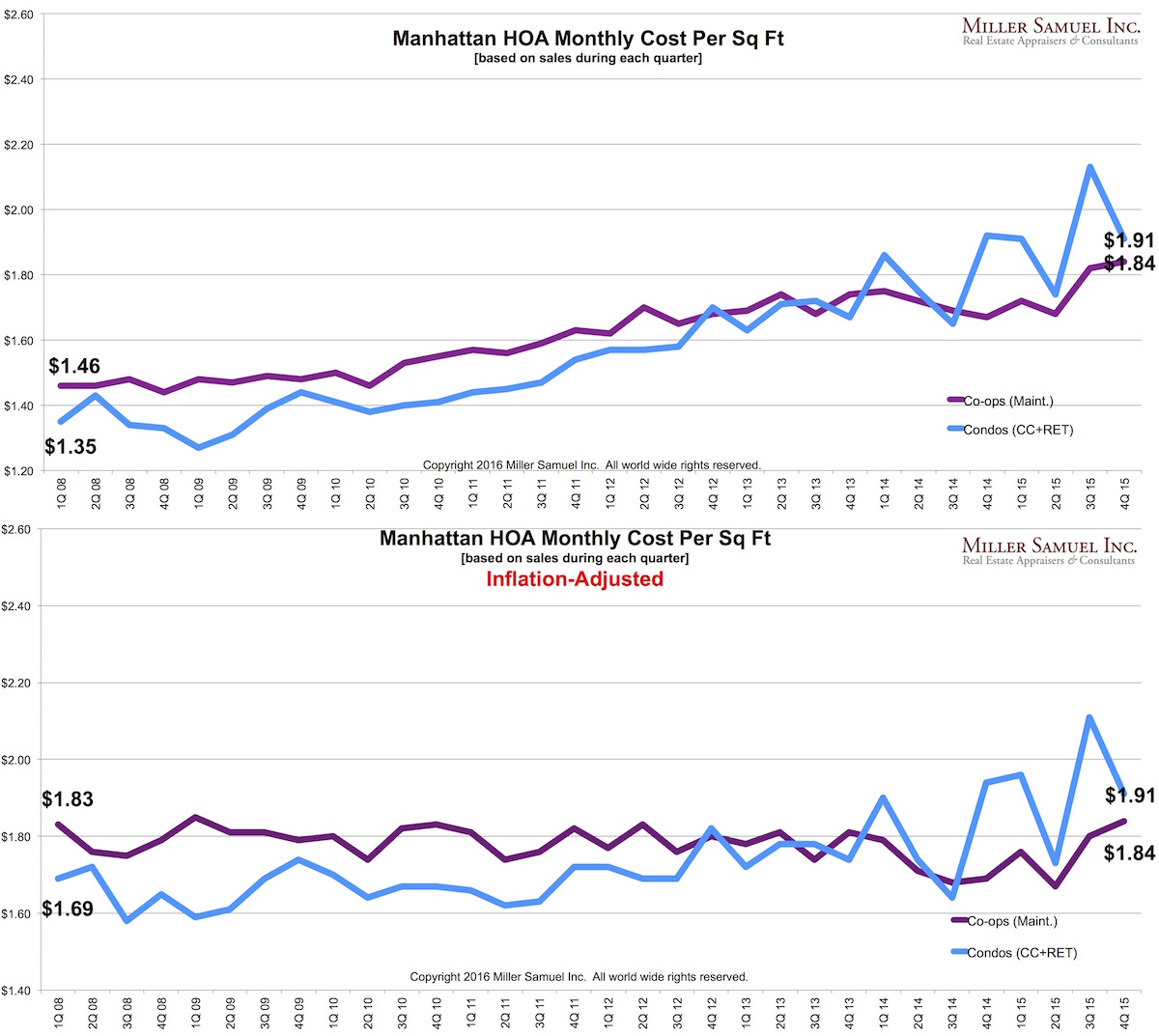 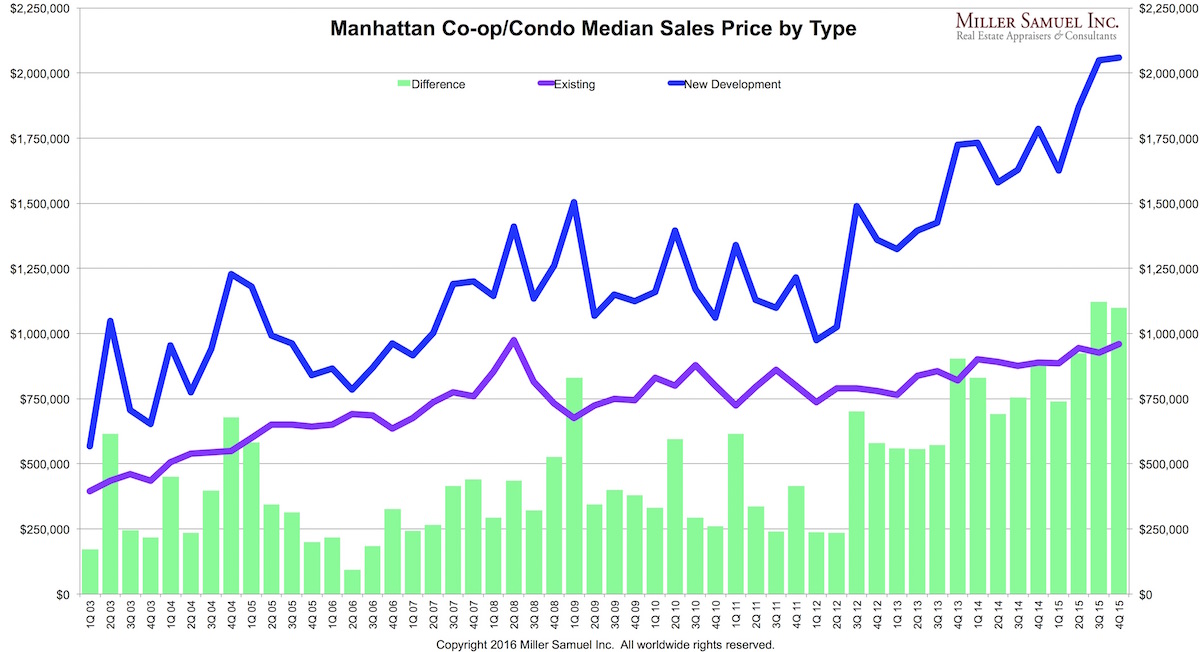 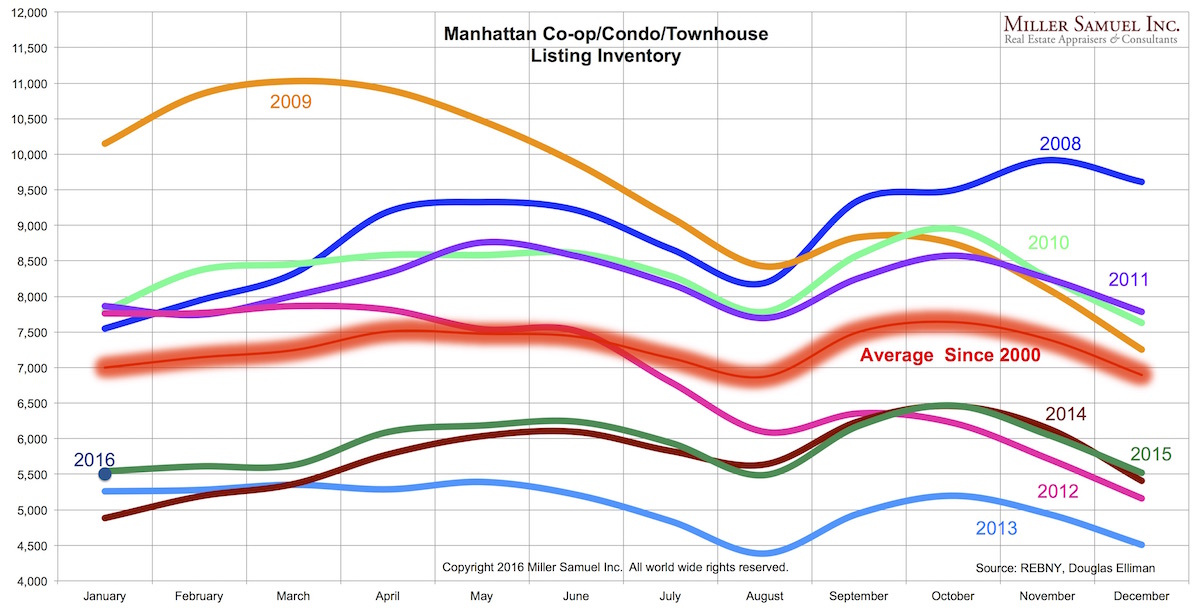 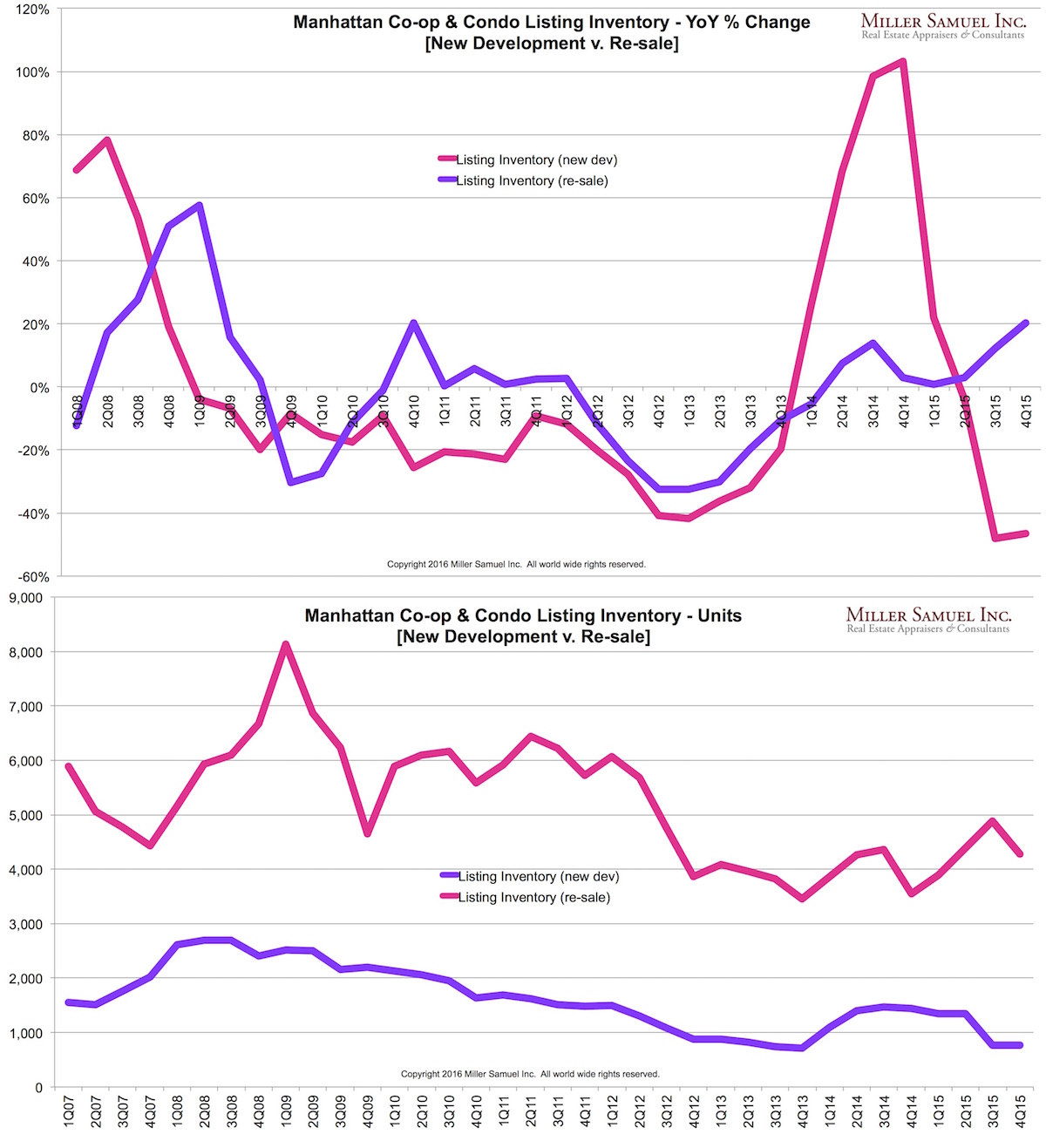 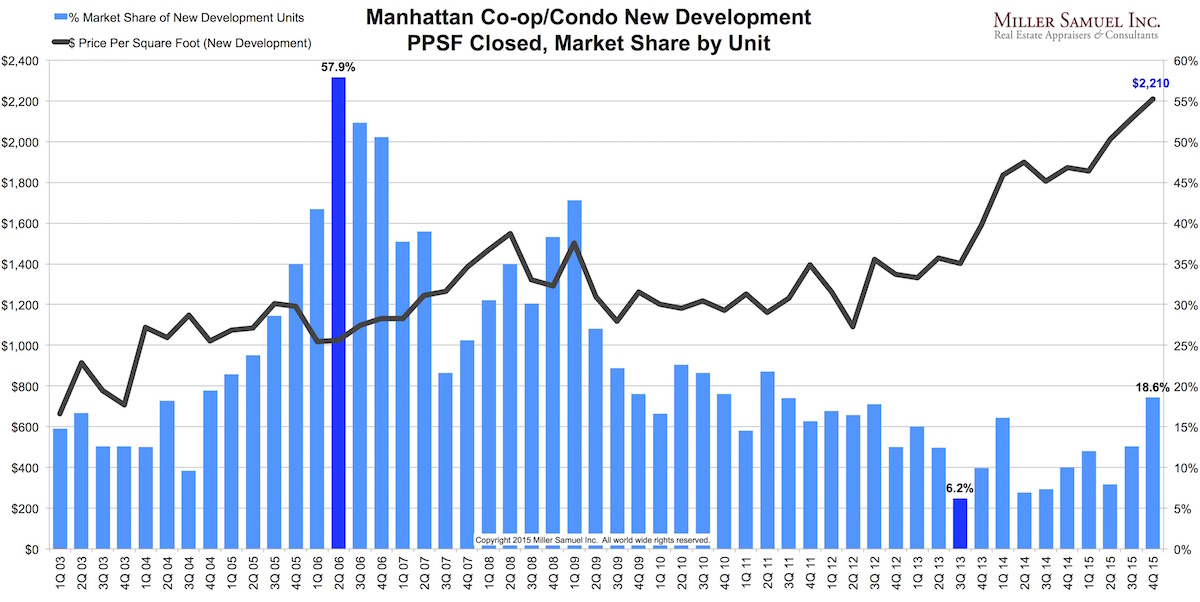 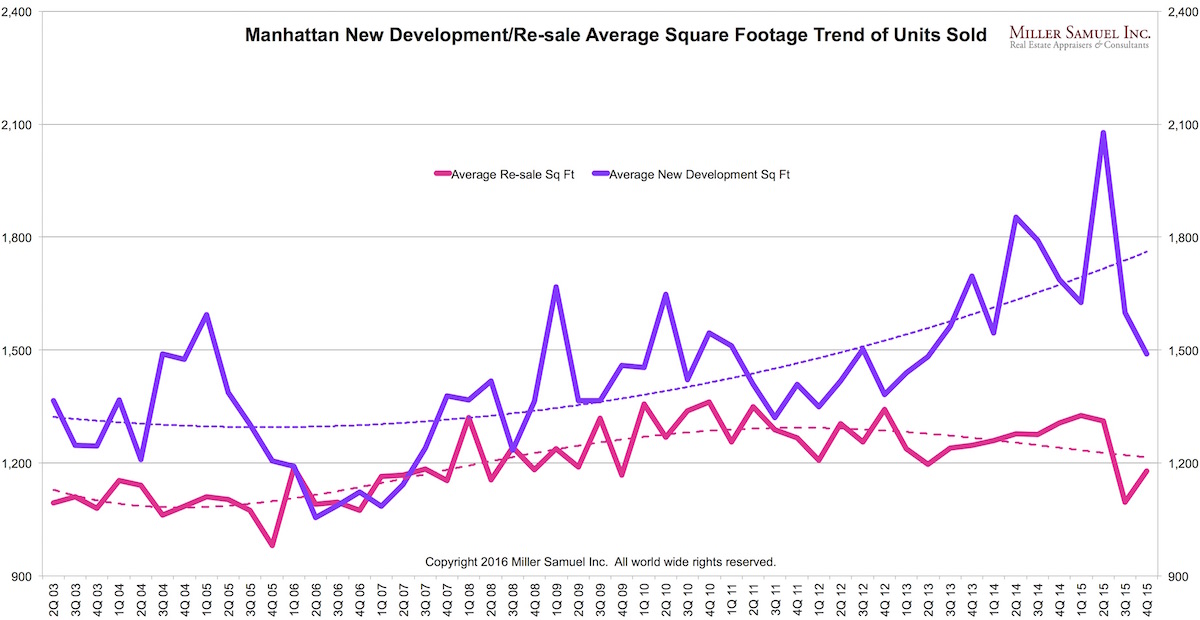 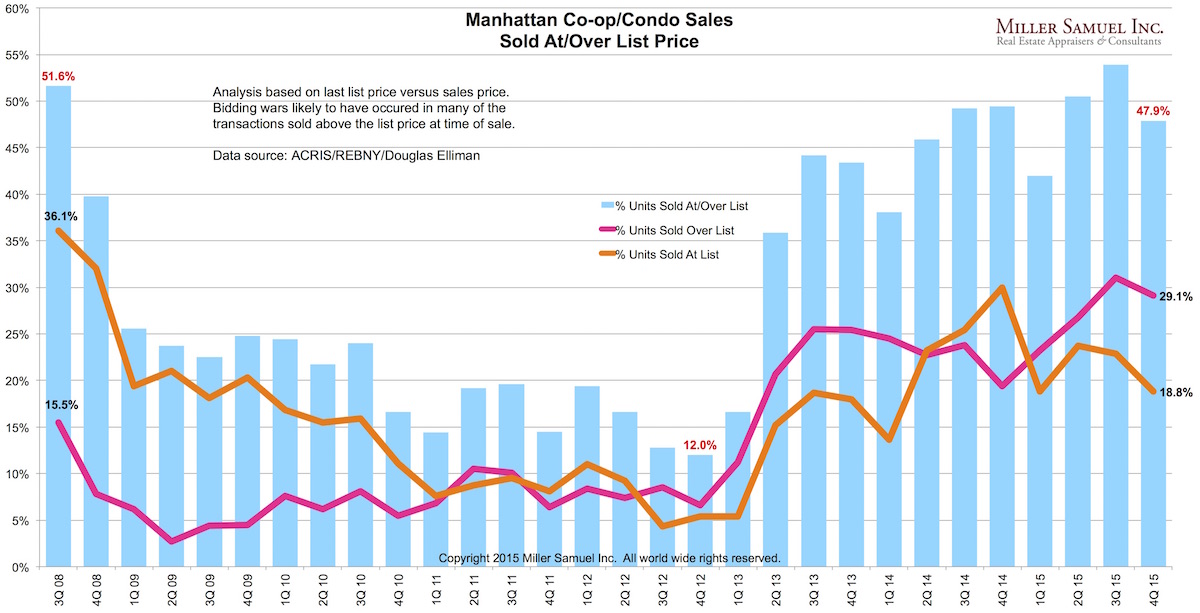 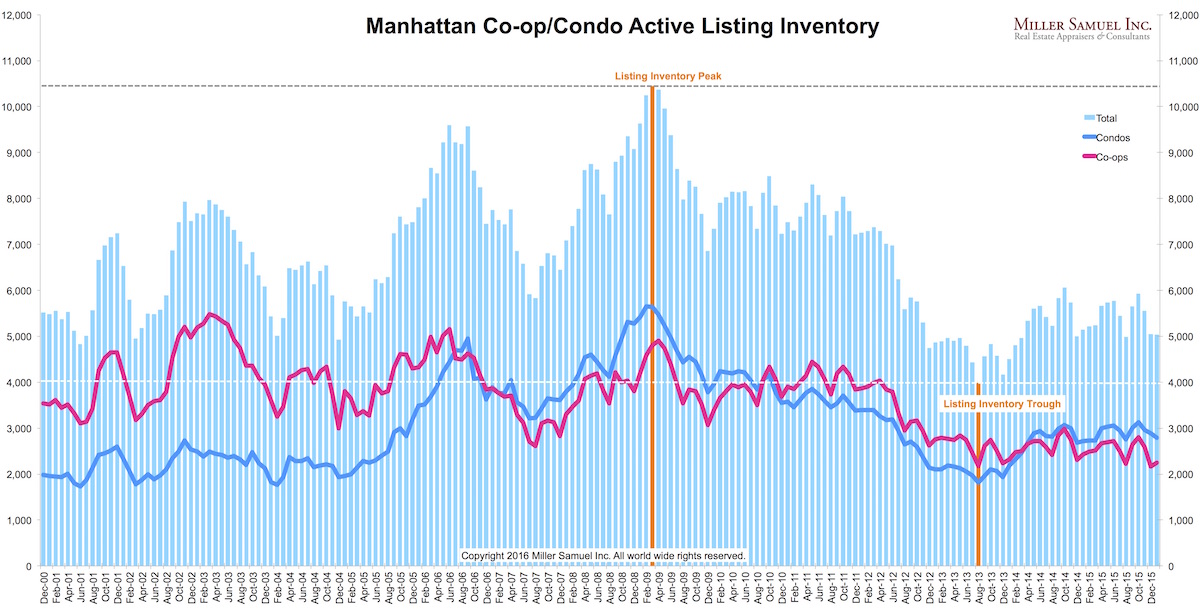 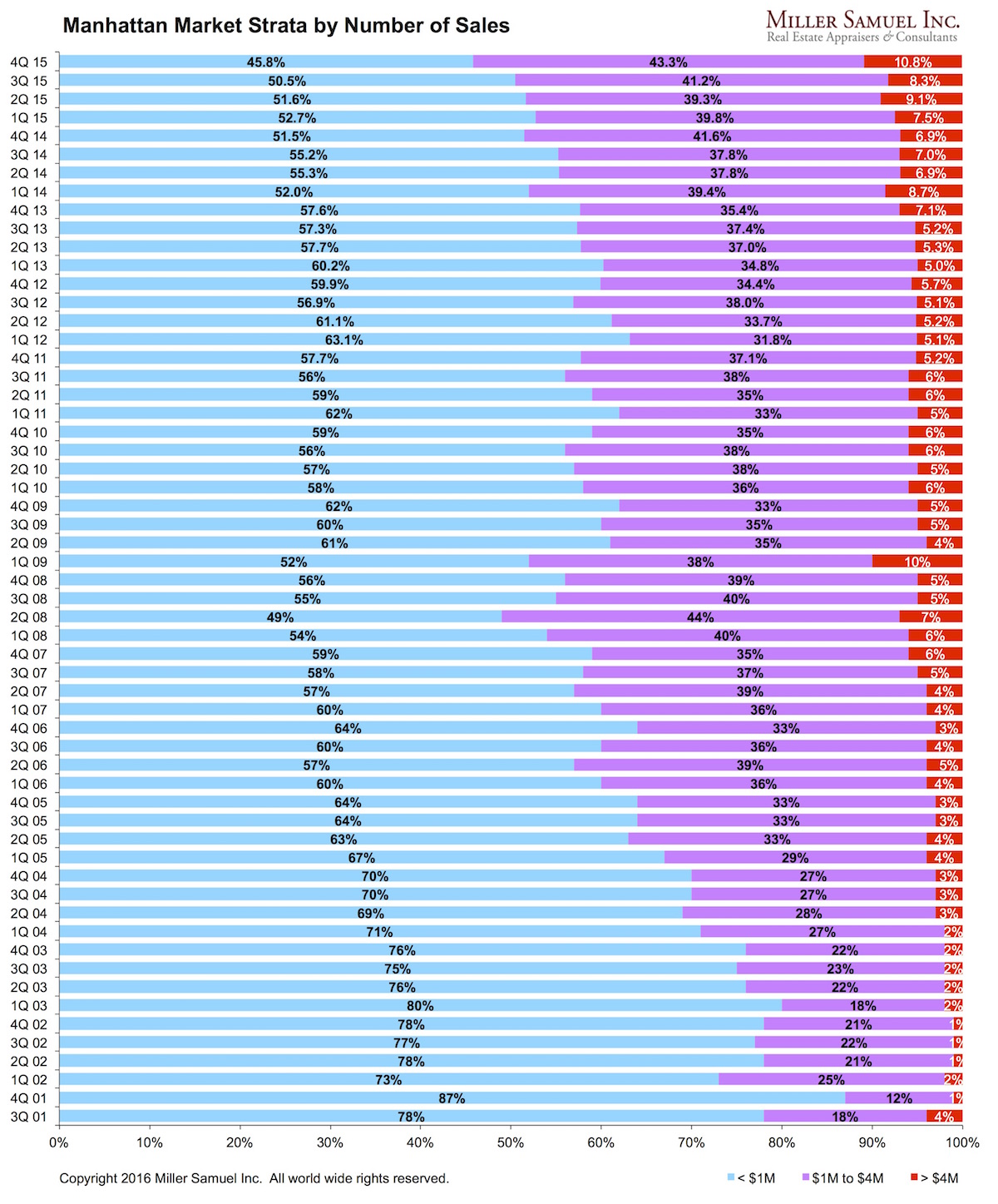 If you need something more than negative interest rates (particularly on Friday afternoons), sign up for my Housing Note here. And be sure to share with a friend or colleague. They won’t feel secularly stagnated, you’ll feel like you’re on a ranch and I’ll come up with a new street name.