It’s a surreal housing market out there but someone always figures out how to get that ball.

I’ve been the author of the expanding Douglas Elliman market report series for twenty-five years and the Manhattan, Brooklyn & Northwest Queens rental report is the only monthly report we produce. The bulk of our report series is released on a quarterly basis.

Mansion Global produced a clear summary table that shows that 96% of the market is seeing sharp gains in the median rental price. Robust rental conditions are being created by a weak sales market. 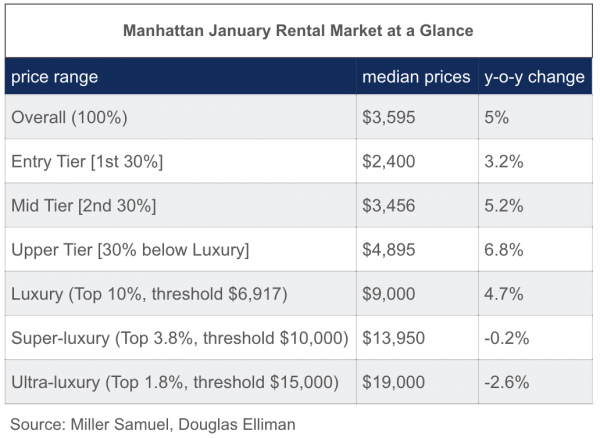 A Douglas Elliman infographic for the report: 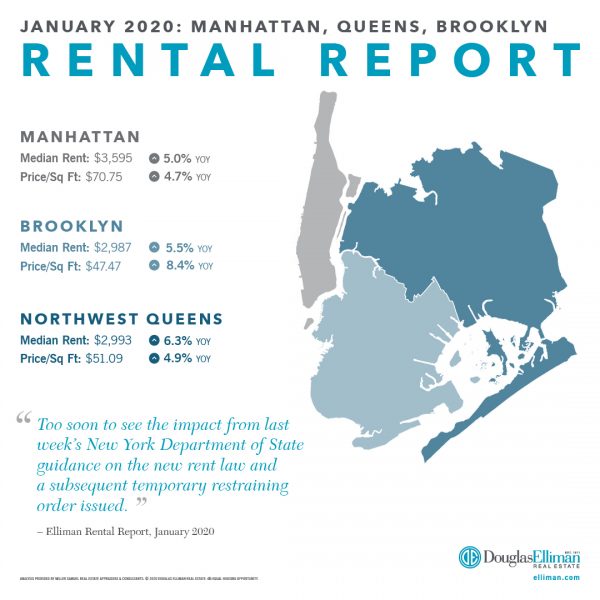 It is too soon to see the impact from last week’s New York Department of State guidance on the Statewide Security and Tenant Protection Act of 2019 and a subsequent temporary restraining order issued after real estate industry trade groups and firms filed a lawsuit to stop its execution. 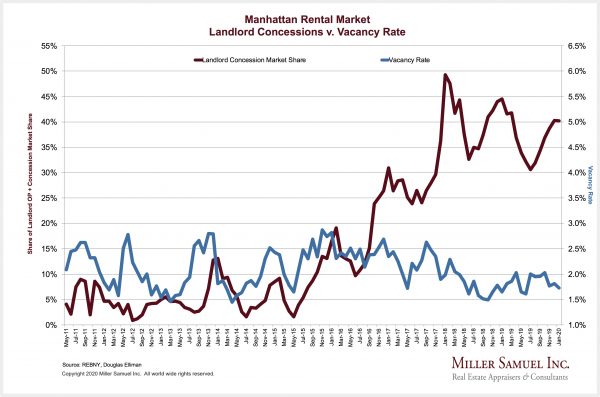 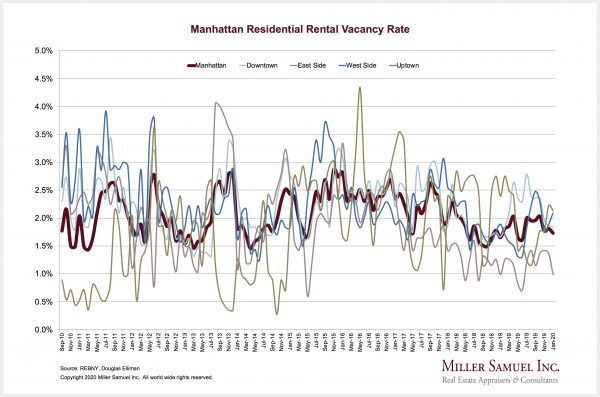 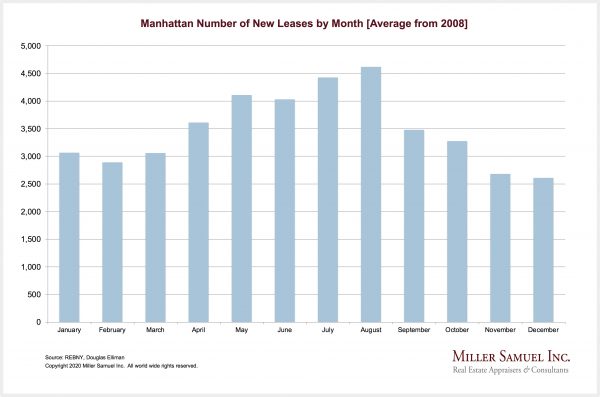 “The market share of landlord concessions fell year over year for the thirteenth straight months.” 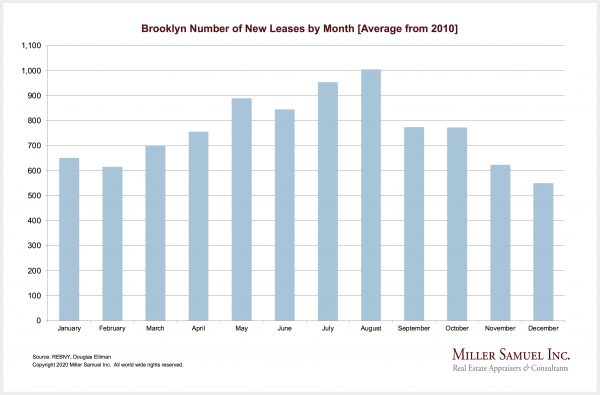 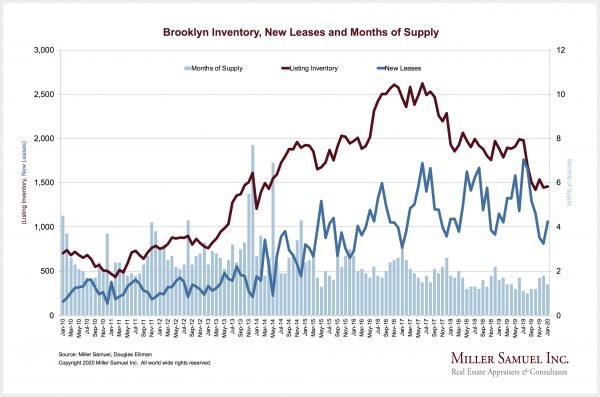 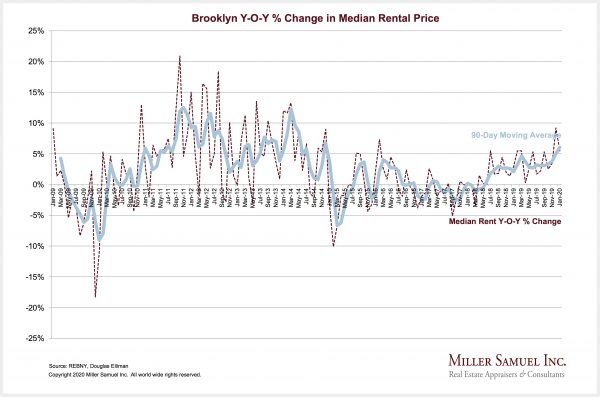 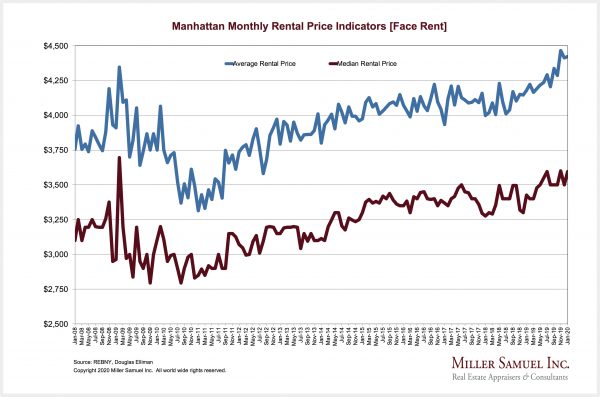 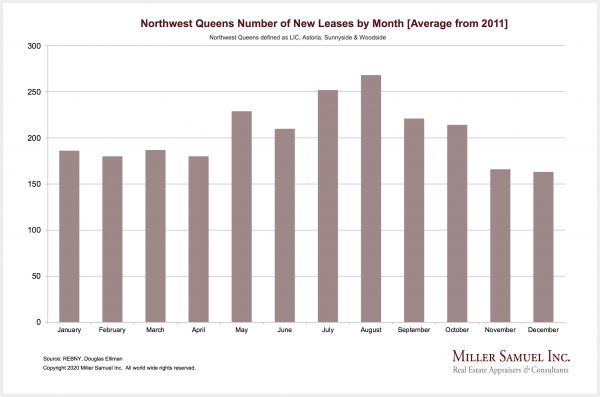 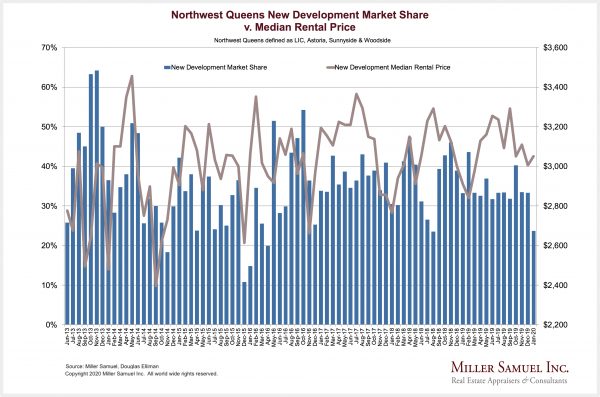 With the proliferation of $100 million+ home sales, I’m starting to feel like a red carpet paparazzi. Jeff Bezos of Amazon just purchased an LA home for $165 million home, not including a nearby $90 million plot of land.

This home sale isn’t remotely connected to the local housing market in any way despite this broker quote:

“The Geffen sale will really help the high-end,” Hyland said.

If we are talking about this super-luxury market, perhaps but it has nothing to do with the “normal” high-end market.

The first known $100 million+ sale occurred in 2011 and by 2014, the market segment was formed. The 2019 market was the high water mark with contributors from LA, New York, and Palm Beach. 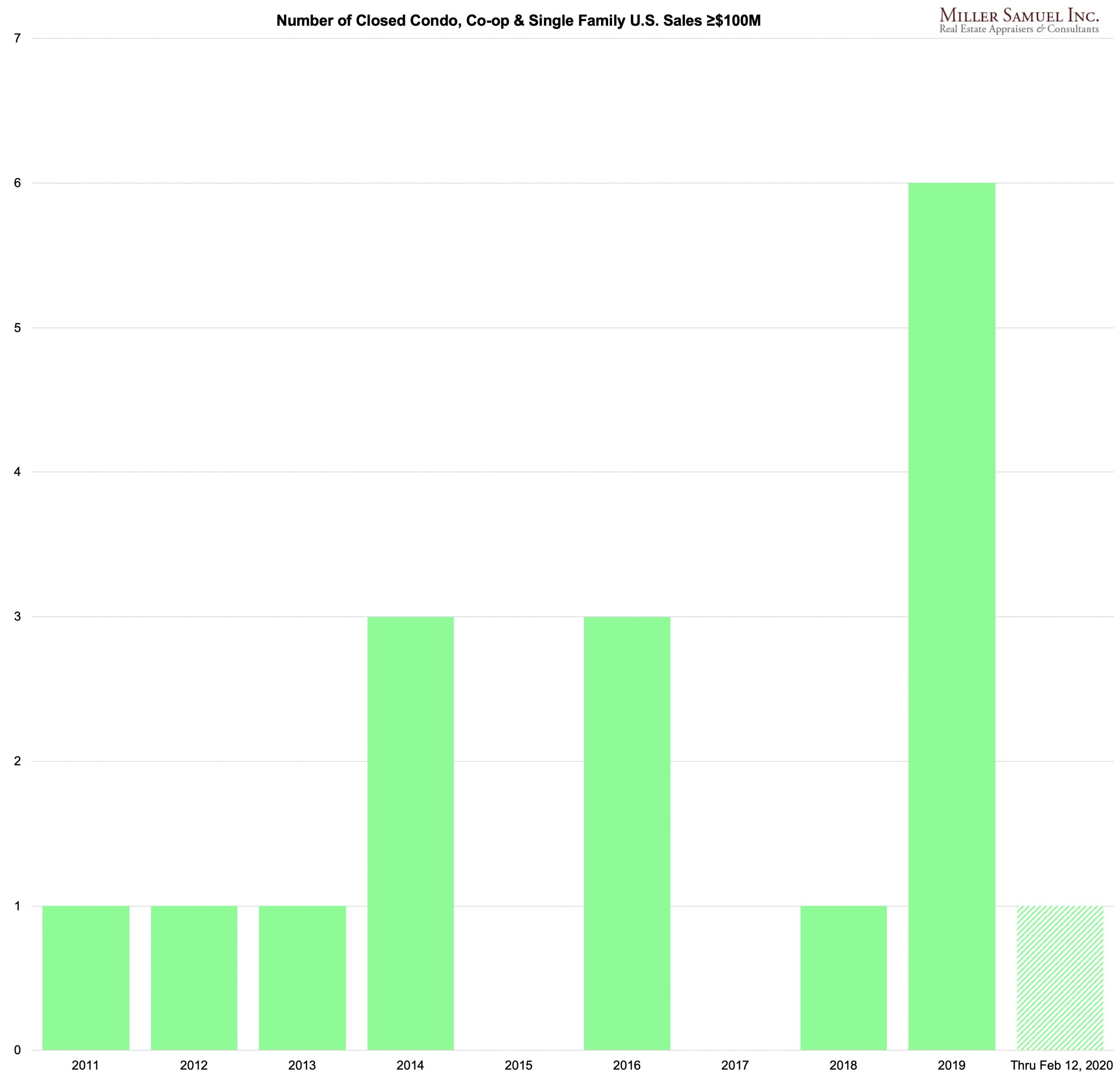 Manhattan’s Upper East Side Condo Market Performance Is Quite Bifurcated

I was speaking to a crowded room of real estate professionals on the Upper East Side – here’s a snippet. 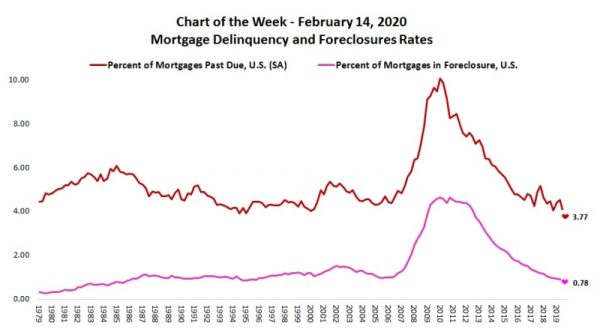 MBA released its latest National Delinquency Survey – for the fourth quarter of 2019 – earlier this week. Mortgage delinquencies track closely to the U.S. unemployment rate, and with unemployment at historic lows, it’s no surprise to see so many households paying their mortgage on time.

When I was in DC this week, I listened to a presenter from the Atlanta Fed talk about retail real estate risks and malls were front and center. A few years ago this topic was seen as sensationalist as was the phrase “retail apocalypse,” but no longer. The scale of the problem is apparent in the following table, where the vast majority of mall properties are rated “B” or lower. 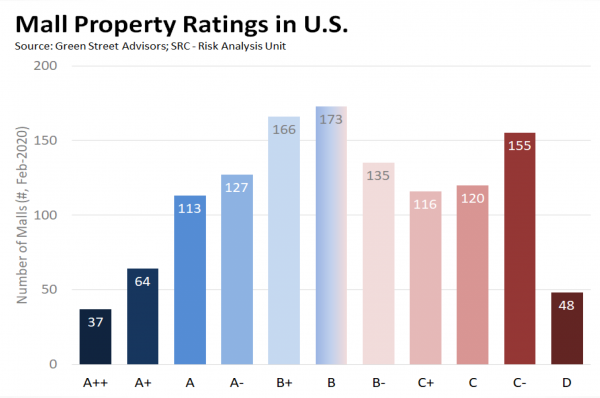 Here are several good reads on the topic. h/t @ritholtz

In short, the broad forces hitting retail are more a lesson in economics than in the power of disruptive technology. It’s a lesson all retailers will have to learn someday — even the mighty Amazon.

The fallout from the retail apocalypse is putting pressure even on high-end malls.

As bankruptcies and store closures pile up among brick-and-mortar retailers, investors are increasingly concerned about mall operators. For the most part, those worries have centered on the landlords who operate dying malls.

An analysis of stores in New York City last year revealed that the number of national chain stores operating in the retail destination had dropped a notable amount. That the entire retail industry is in flux is not a secret, but the drop in one of the countries top retail destinations sparks a larger question: Is the decline of national retail brands in New York City a regional problem, or endemic of a larger retail shift?

With today's benchmark revision, there was still a modest increase in payroll growth in 2018 over 2017. The 2019 average was essentially unchanged. Job growth has been remarkably steady for the past four years. pic.twitter.com/I44FdiLTVp

US 30-year mortgage rates running at the lowest monthly average since September 2016 pic.twitter.com/NZ9JLXPxg1

GAO to Study The Dilution of Intent of Title XI

From the House Financial Services Committee:

“The Appraisal Subcommittee (ASC), the entity created and charged under Title XI to monitor the appraisal related actions of the Federal financial institutions regulatory agencies (Agencies), estimated in its 2018 report to Congress that ‘at least 90 percent of residential mortgage loan originations are not subject to the Title XI appraisal regulations,’” the lawmakers wrote. “Over the past few decades, however, the federal agencies charged with implementing Title XI of FIRREA have taken steps to limit the number of transactions for which an appraisal is required….We request that you conduct a review of the impact of these changes, including the potential risks that they pose to homeowners and the safety and soundness of our financial system.”

In other words, the de minimus has risen 14 times higher than housing prices. I’d say Congress’ original intent has not been followed.

The author of “Dispatches From The Cosmic Cobra Breeding Farm” lays out his case against The Appraisal Foundation on Phil Crawford’s Voice of Appraisal. It is quite compelling reasoning and a good read. I got a lot out of it.

However, I am troubled by the author’s bias in rationale. Where he falls short is trying to explain why he doesn’t hold AI, IRWA, and ASFMRA to the same standard as TAF. The logic Jeremy uses is that he can quit those trade groups and he can’t quit the foundation and still be an appraiser. That’s quite a disingenuous argument.

We All Use A Periodic Table of Data Elements

Earlier this week I represented RAC (Relocation Appraisers & Consultants) at the Appraisal Subcommittee (ASC) Roundtable held at the OCC. The ASC is the financial link between congress and The Appraisal Foundation. Over 50 agency representatives that connect to the mortgage process were there to discuss data.

Lee Kennedy of AVMetrics, a firm that tests AVMs moderated a panel on the topic of data. Lee’s presentation included a terrific slide that was shared with the attendees. 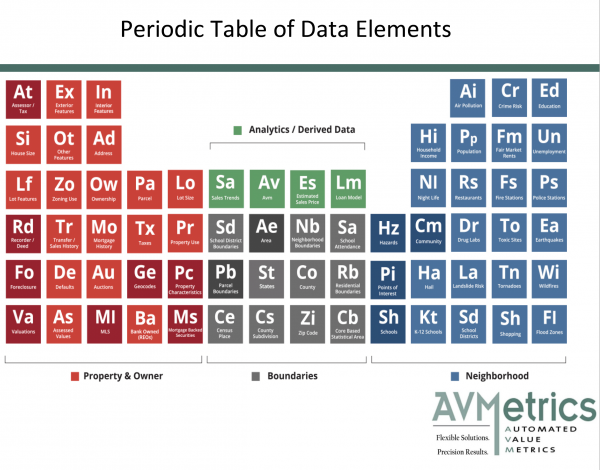 Setting The Standard For Telling The Story Of The Market

As the mortgage industry pushes to wigdetize appraisers, the cream of the crop are straying from mortgage work and not looking back. Many of us (appraisers) possess an invaluable level of knowledge that agents and consumers are hungry for but are unable, unwilling or afraid to share it.

My friend and appraiser colleague Ryan Lundquist in Sacramento shows all of us how to give a presentation (that he was generous enough to share). Please watch and take notes.

I’m begging you to watch the whole clip. You just never know when it will be your last conversation with someone.