The True Colors of the Housing Market

If any of you are familiar with the way I draw charts, it’s fairly obvious I took band in high school rather than art and am currently making up for lost time with the Crayola color palette. I saw the amazing colors on these chairs of a noted architect and it was hard to contain myself. 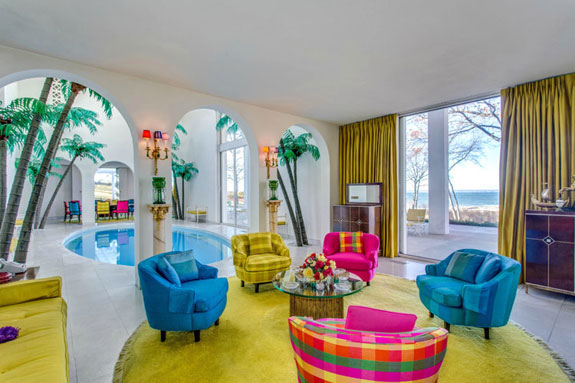 While I’m personally not a fan of Edward Durell Stone for his NYC architectural accomplishments which are some of the most awful looking buildings I’ve ever seen – his attempt on interior design 50 years ago was – specific to the chairs – awesome. They wouldn’t work in my 200 year historic home though. I brought this up because Pantone selected “Greenery” as the Color of the Year 2017. And how unforgettable was 2016? 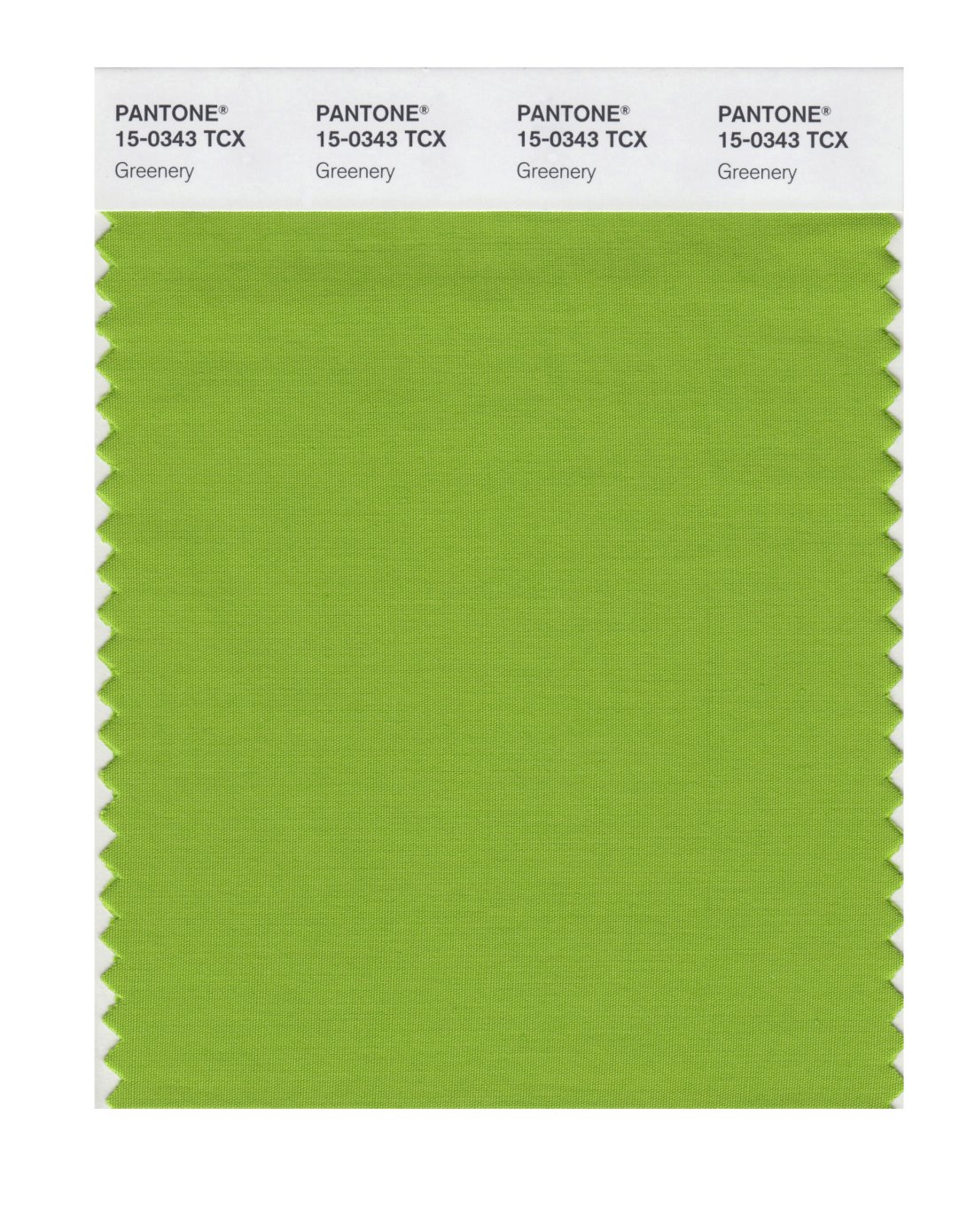 Ok, all of the above was a silly way to get to today’s theme of showing true colors – that is – presenting information clearly and concisely so the reader doesn’t have to decode it. I touch on the rental market and the Appraisal Institute debacle. But I really do think those chairs presented above are super cool.

Yesterday Douglas Elliman published the monthly rental report for November I author on the Manhattan, Brooklyn and Northwest Queens rental markets. This is part of the Elliman Report series I have been authoring since 1994 (yes, I am super old). The theme across all three rental markets continues to be stronger conditions at the entry and softer at the top. Landlords are having to work harder to protect the face rent (rent paid before considered concessions).

Bloomberg News added a cool chart to their coverage of the rental report that presented the concession trend. 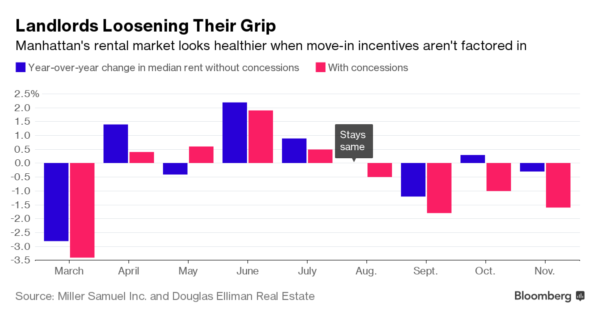 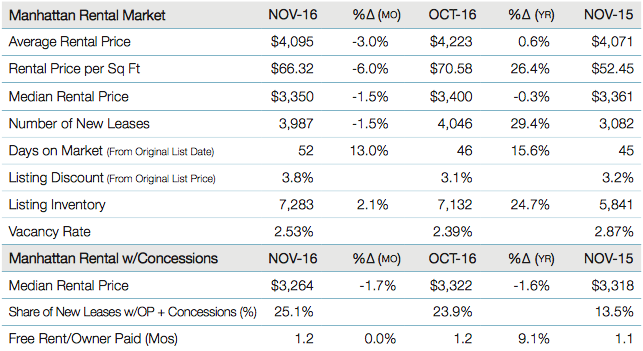 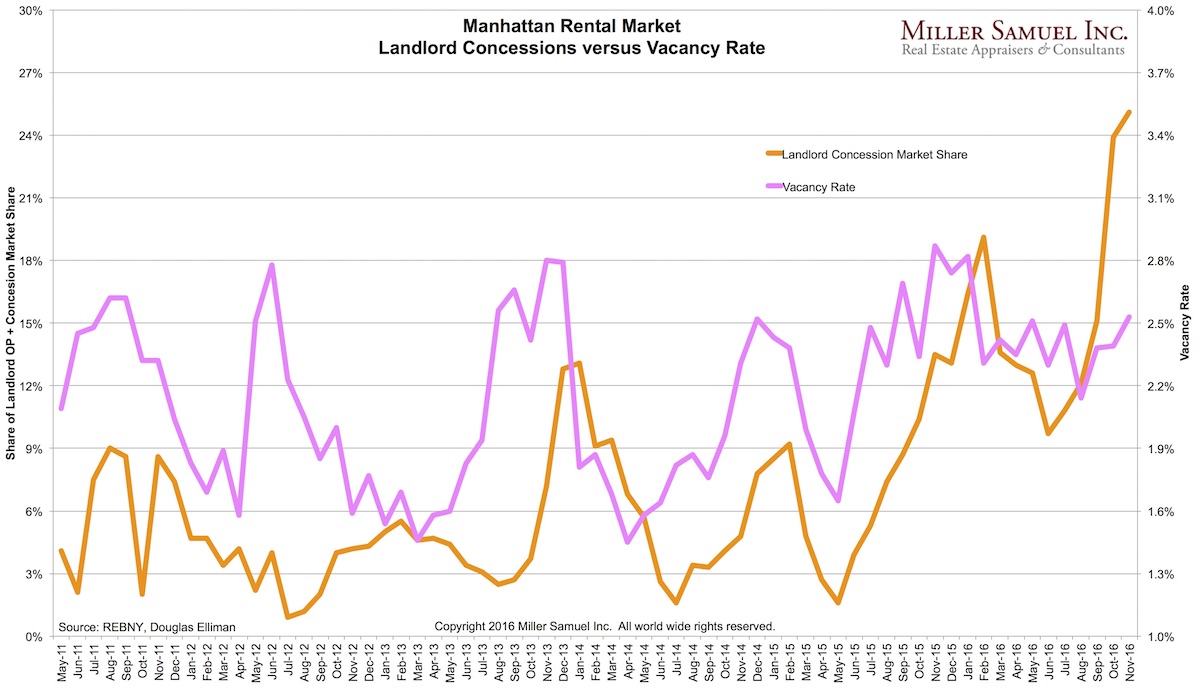 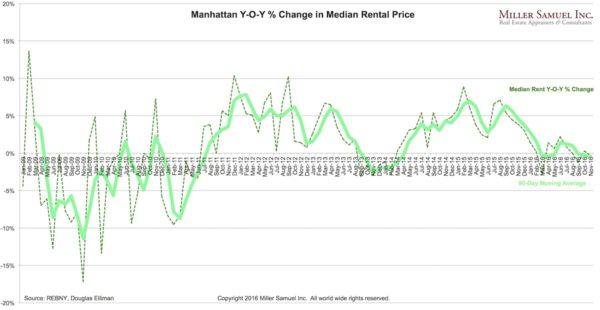 BROOKLYN Brooklyn rental prices slid year over year for the fourth time in five months. Median rental price slipped 1.3% to $2,780 from the year ago quarter. Average rental price declined 5.3% to $2,993 over the same period. Luxury median rental price, representing the top 10% of the Brooklyn market, was noticeably weaker and fell 16.6% to $4,900 from the same year ago period. The decline in luxury rents was consistent with a 13.5% decline in the entry threshold to $4,200 per month. The amount of concessions offered by landlords jumped to a new record of 15.4% from 6.6% in the same period a year ago… 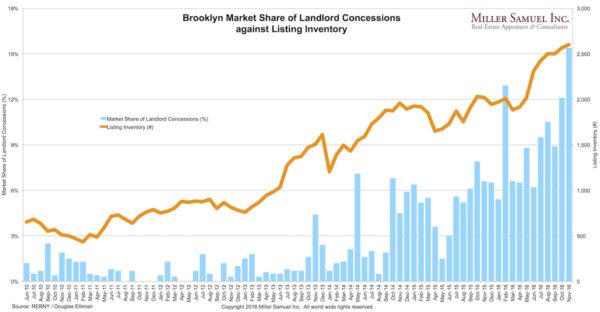 NORTHWEST QUEEENS The northwest Queens rental market continued to show mixed results on a month to month basis. The median rental price declined 6.6% to $2,555 from the same period last year and the sixth such decline in 2016. The region includes the neighborhoods of Long Island City, Astoria, Sunnyside and Woodside. Average rental price showed the same trend, declining 9.4% to $2,738 over the same period. Rental growth amount the various price segments was inconsistent, unlike the adjacent markets of Manhattan and Brooklyn, largely because of the 36.4% market share of new development rental unit…

A lot more charts on the NYC rental market:

Small is the New Big

The global fascination with micro apartments is largely because they address one potential solution to the affordability crisis. I’ve always found it interesting that there are thousands of these apartments already in Manhattan and they were built 60-100 years ago. My parents own one as a pied-a-terre with 300 square feet. There is no resistance to them in the Manhattan market but attempts to create them within new development have been mixed, largely because they don’t really address the issue of affordability. I must admit I never get tired of how creative people can be with small spaces, especially this one.

Tiny apartment in Paris (8sqm only) from Kitoko Studio on Vimeo.

Developers that Acknowledge the New Market Condition Can Move Units

Prior to the closing of a recent high floor apartment at 432 Park Avenue, the tallest residential tower in the western hemisphere I thought it would be a interesting to see what was happening in the building – this was covered by Bloomberg. Since the majority of the 2016 closings went to contract several years ago, I decided to drill down to the contract date and isolate those. Of course the contract date in public record can be wrong: one of the sales had a contract date of 12/5/2016 yet it closed prior to that and had I looked it up during the month of November. I’m skeptical that our public record (ACRIS) can predict the future, but perhaps I’m naive. The sales that went to contract and closed in 2016 closed for an average of 10% less than the list price at the time of sale. However each sold for much more than presented in the original offering plan because of subsequent price amendments – click to expand following table for full effect.

Barry Ritholtz over at the Big Picture shared this fascinating video interview on Michael Lewis’s new book “The Undoing Project: A Friendship That Changed Our Minds.” (I pre-ordered it a while back and have read nearly all of Lewis’ books) Barry reviews his new book and interviews him on his Bloomberg Radio show Masters in Business.

Plus there is a great interview on CBS 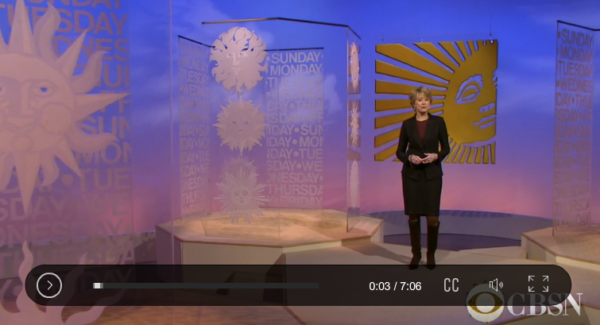 Perhaps I’m going overboard on this book but to someone who wrote Liar’s Poker, Blind Side, Moneyball, The New New Thing, Flash Boys and many more great books and magazine articles, I’m a huge fan. The moral of the story is don’t always trust your gut. That’s why I always told my sons to select “B” when taking multiple choice tests where they didn’t know the answer. Of course that didn’t seem to help.

To continue the title theme of showing one’s true colors…

Appraisal Institute Maelstrom
I wrote a post on my matrix blog: Sadly, The Appraisal Institute is now working against its local chapters after I read an email provided by the Appraisal Institute that seemed absolutely outrageous and slick, as if the membership wasn’t very smart (letter is presented on the blog). Well the membership is, in fact, smart and more importantly, they are outraged. The post went viral with a couple of thousand new readers to my blog and sharing the original Mailchimp email over the subsequent 24 hours. I received an outpouring of feedback from chapter members, presidents or executives of chapter boards, appraisers in the field, appraisal coalitions and others through texts, phone calls and emails – many who I didn’t know personally. They provided a slew of additional insights and information on the situation for which I am very grateful.

My Matrix post wasn’t intended to be a take down of the Appraisal Institute and the culture that it has morphed into – one of master rather than servant. I wanted it to be a call to the appraisal industry to focus on resources that are working for them rather than for themselves. AI’s arrogance is completely inappropriate so I contend the Appraisal Institute at the national level is officially obsolete. Going forward we need to move on and focus on more important things facing our industry. As I said in the post, the AMCs have run out of appraisers willing to work for half pay and Congress is looking into “modernizing” the appraisal process. Other organizations outside of AI are starting to talk and are looking to work together. This is the moment the appraisal industry has been looking for and now that it is finally here, I don’t want our industry to be bogged down and distracted by the awful politics of AI.

I found this to be interesting: The appraisal regulatory structure should take advantage of advancements in alternative home valuation methods. Hint: AVMs.

Also notice the reference to Coester in the slides and the dismal performance of the international effort to shore up declining membership. I would think the way to stop the decline in membership is to actually provide leadership and (ironically) value to the appraisal industry, no? Amazingly, AI isn’t aware of what Coester represents to most appraisers nor are they aware of how to communicate with their dues paying members or how much of a boondoggle the international expansion attempt really was. This supports the idea that they remain ill equipped and unprepared to lead our industry. 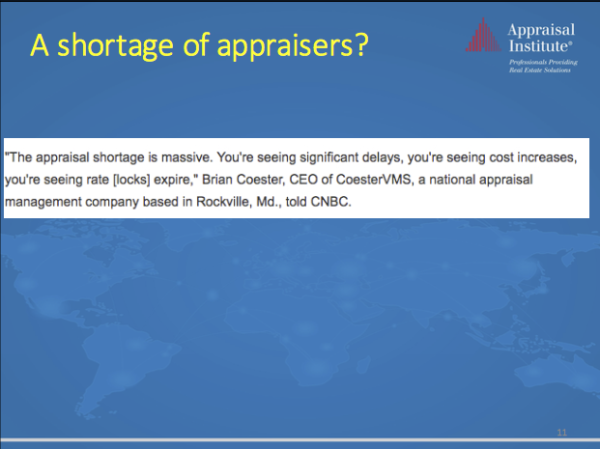 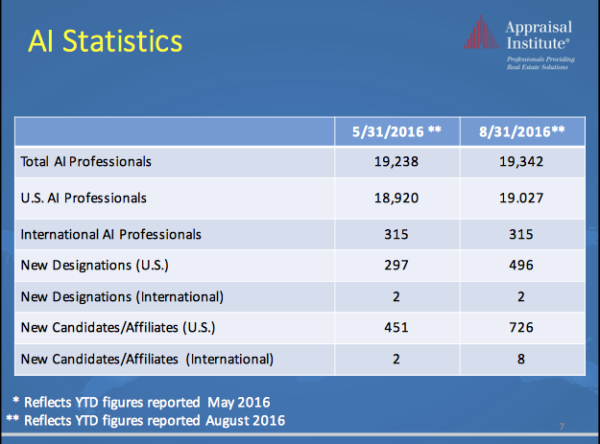 Being Threatened By A Different Kind of Vicious Dog
One of my appraisers submitted a report to both parties in a matrimonial a while back and the husband, formerly of a large hedge fund (a master of the universe type), called me. When I realized why he was calling (thought our value was too low, obviously) I pushed back at the inappropriateness of the call and said I wasn’t going to do anything unless through proper channels – referring him to the terms on our engagement letter. He remained exceedingly aggressive and told me he was starting up a new business and when he does…he is going to “remember this.” He said that a couple of times for effect even as I was pointing out that he was threatening me. It was so disturbing I eventually I had to hang up on him. I think I’d rather meet a rabid dog on an inspection of a vacant foreclosed house in the middle of nowhere at dusk than an angry master of the universe.

If you need something rock solid in your life (particularly on Friday afternoons) and someone forwarded this to you, sign up here for these weekly Housing Notes. And be sure to share with a friend or colleague if you enjoy them. They’ll be more efficient at holiday decorations, you’ll be able to spin a basketball and I’ll continue to hate powerpoint.