Because I am always confident that human beings are capable of screwing things up…eventually, I believe we should always try to right our wrongs…even if it involved blowing things up. I saw at least one Detroit Lions game there when I was in college so I was trying to imagine what the ride in the seat would be like after the second explosion:

But we can’t overlook things we don’t screw up. I spent a lot of time looking at this album in college when I wasn’t in stadiums that were going to be blown up in the future. The Battersea Powerstation where the iconic pig flew overhead has been converted into a cultural center. 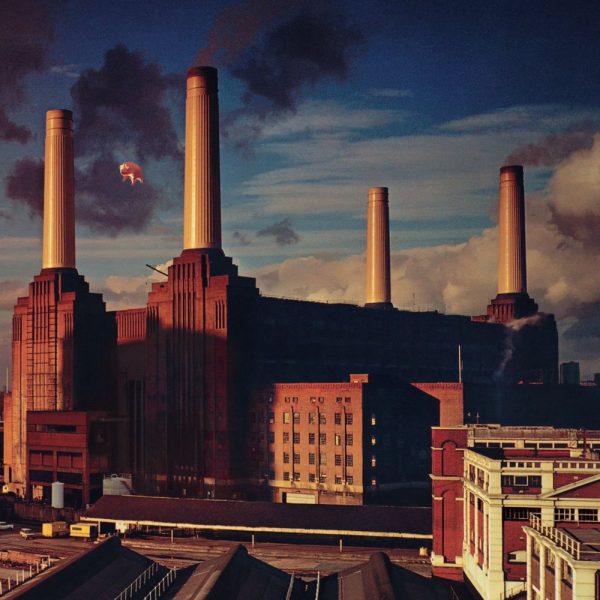 This Pink Floyd album confirmed to me long ago that pigs can fly. “When pigs fly” is one of those phrases that applied to the mortgage interest deduction as part of the “American Dream” analogy. In other words, it is sacred and will never be touched. Wrong. I’ll discuss later. Now that it the “pigs” phrase is no longer an accurate inference in our literary lexicon, here’s another: “When trains do stunts” is the new “When pigs fly.”

I’ll be posting my views on the tax bill over on my Matrix Blog this weekend. Lots of moving parts made me rethink some of my views I established earlier this week. I’ll include in next week’s Housing Notes and if you are on my email list, you get it this weekend. Doing 2 TV appearances on Tuesday on the topic as well. Fun!

While the Manhattan super lux market remains soft, we continue to see random sales occur after the price has been adjusted to current conditions to show there is still life in it. We’ve seen this in Greenwich Connecticut this fall. Now Mansion Global reports three half floor units on the 92nd and 93rd floors (96 is the top floor) that went to contract seemingly at the same time asking a combined $120,750,000. The actual contract prices are not available, nor is confirmation whether these three sales were made with a single buyer. This project was one of the first high profile developments to work with buyers as the market cooled in 2014. Like I have been saying for 3 years, the buyers remain in the market but the price needs to reflect 2017.

My appraisal firm, self-included, has inspected a number of high floor units in this building and the views are incredible. 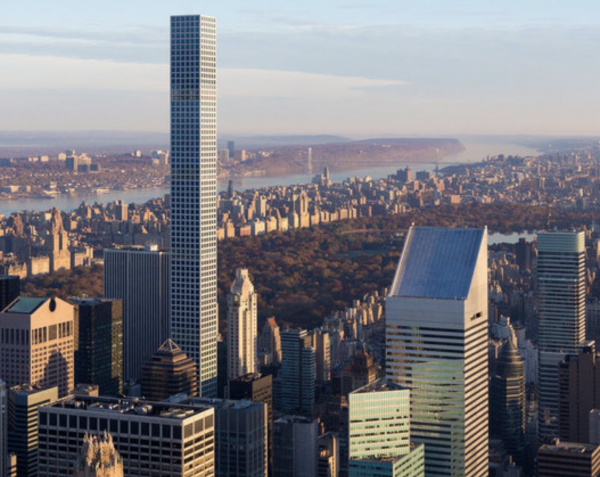 What is it about the 1970s that shaped New York City?

A few years ago I wrote a piece for Elliman Magazine that was covered in Curbed that tracked 100 years of New York real estate. This was more of an anecdotal effort since I searched the New York Times archives for real estate stories for each decade to extract what rental and sales prices were going for. 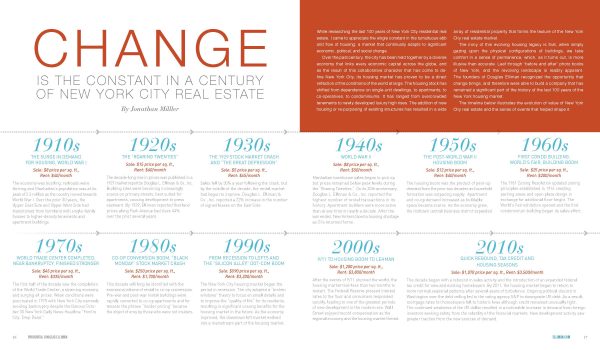 You can see a massive course correction in the 1970s. 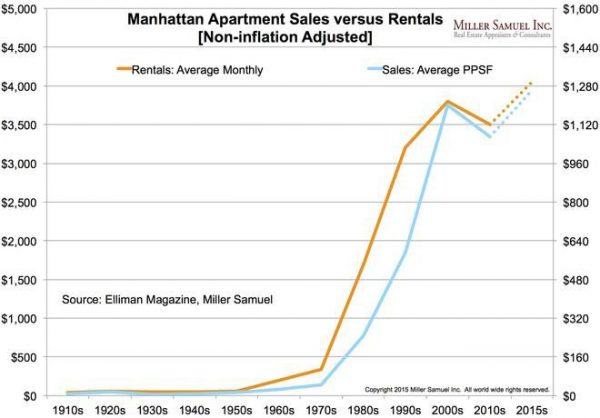 I think it had a lot to do with land use policy. A reader chimed in, sharing his thoughts on an article he wrote a few years ago about LA and a recommendation of this book, which I just bought: Zoning Rules!: The Economics of Land Use Regulation. My reader writes: Fischel argues that high inflation and weak growth (stagflation) cause property owners to work harder to increase property values through zoning limits..

This topic has been widely covered by noted researchers like Ed Glaeser who coauthored this paper in 2003 and included some of my data: Why is Manhattan So Expensive? Regulation and the Rise in House Prices.

When I think of New York City in the 1970s, I was growing up in Washington, D.C. thinking all of New York was like the movie Fort Apache, the Bronx. It makes one appreciate how far (and how much more expensive) New York City has come.

My friend and appraiser colleague Larry Sicular, MAI, RM of Sicular & Associates, who is also a broker at BHS, wrote an article on the softness at the Manhattan high end: Exploring the Malaise at the Upper End of the Manhattan Housing Market. He uses our data to tell the story – here are just a couple of his conclusions:

-On average, recent price performance, for many of the most expensive apartments, has been uneven, and it has also been unimpressive during this past real estate cycle.
-The condominium market now overshadows the cooperative market in both price and sale volume.

It makes it tougher for lenders to lend when the rate they borrow approaches the rate they lend at. Regulators are working hard to encourage banks to lend more but big banks remain fairly resolute not to lose their shirt again.

Mortgage volume keeps falling, placing the blame on us? 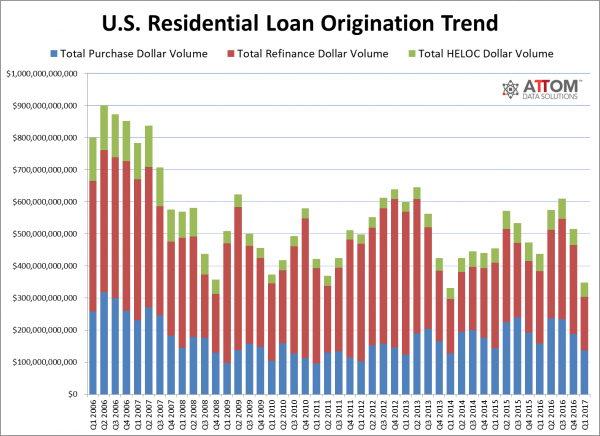 This all goes away if taxpayers and mortgage applicants understand what service we actually provide: neutral market insight so that others can make informed business decisions. The 100% Appraiser Movement is the first step in getting the word out – no more letting others speak for us.

My friend Nathan does a better job explaining this than I can.

More on Tristar Bank in TN (you know, the one that shouldn’t be in the mortgage business)

There has been a lot of outrage about the letter they wrote to the ASC so get a waiver on appraisals to save their customers time and money. It was a tone-deaf letter that was so embarrassing I’m surprised that FDIC or other banking regulators aren’t concerned about their risk management. I addressed this letter in last week’s Appraiserville in my Housing Notes called: The Appraisal Waiver “Slippery Slope” Becomes A “Cliff”.

I heard that Tennessee appraisers have flooded the bank with calls and in-person visits to try to get on the list. This has been the rep of the bank – they rely on their AMC which they touted as performing “evaluations” and then have their senior officer evaluate it. Although I heard AI is working hard to get the word out on this, their hard push to legitimize evaluations as an alternative to appraisals is a direct consequence of their anti-residential appraiser efforts by Scott DiBiasio at the state legislature level.

I thought I would look at what kind of bank Tristar is:

It’s a small bank located in and around the booming Nashville market and they are the first in the country to submit a request to ASC for an appraisal waiver. Joan Trice of AppraisalBuzz wrote a good breakdown of this on her blog with information on how to get on the approved appraiser list.

This is something that slipped under our radar. This bill reflects the basic problem with DC economic policy right now as it relates to mortgages. The regulators and the federal government are working hard to get mortgage volume to rise – they don’t understand how that is possible since mortgage rates are so low. Appraisers, without real representation, have no voice so we are getting run over because by doing our jobs, we don’t always agree with the value of the collateral and by cutting by 50% to 70% they have created a shortage of appraisers willing to work for substandard fees. I’d be scared about the bond market in a few years.

Section 103 is most relevant to mortgage appraisers.

Section 103. Access to Affordable Mortgages.
This section provides a tailored exemption from appraisal requirements under the Financial Institutions Reform, Recovery, and Enforcement Act of 1989 for certain mortgage loans with a balance of less than $400,000 if the originator is unable to find a State certified or State licensed appraiser to perform an appraisal after a good faith effort to do so.

My question is this: How is good faith effort measured? Didn’t everyone assume that in 2002-2008? Those are just words.

Over time, the banks can easily game the system: Drop apprasial fees by 99% and then say there is an appraisal shortage. That’s effectively what is happening now.

I join Phil on his always must-listen podcast. We talk hybrid appraisals and our screwed up appraisal world. Listen here.

Always fun to join Phil and Kevin on the show (I think this was my 4th time).

If you need something rock solid in your life (particularly on Friday afternoons) and someone forwarded this to you, or you think you already subscribed, sign up here for these weekly Housing Notes. And be sure to share with a friend or colleague if you enjoy them. They’ll get you on that appraiser list, you’ll do train tricks and I’ll get more PR.