How Smooth Is the Housing Market? Popcorn Ceiling Smooth.

I’m out of town at the moment with a scrambled schedule running at 50% capacity in this issue. I suspect some of my Housing Note readers will be thankful. But I’m never short of time when it comes to the topic of popcorn ceilings.

Back 33 years ago when Miller Samuel was launched, we used “wheel on a stick” measuring devices to calculate square footage of co-ops and condos. Since the measuring stick (no telescoping handles back then) stuck out of my appraisal bag (we don’t use cars to do property inspections in Manhattan), many assumed I was headed out to play squash?

There were no lasers or infrared devices available yet to measure apartments and co-ops have no square footages available in public record. Yet this latest and greatest “wheel on a stick” gadget was a significant improvement from the “tape measure.” I remember fondly hearing from the owner of a large appraisal firm in my market during the 1980s telling me confidently “the tape doesn’t lie.” But in the same breath, he asked me how often I had to return to an apartment to remeasure at the client’s request. And my answer was “like, never” so apparently his “tape measure” lied a lot.

But there was a potential problem for this new fangled measuring device. There were many apartments that still had thick shag carpeting as a decorating legacy of the 1970s. That modern “wheel on a stick” we used to roll across the floor could be off by as much 1-inch per foot.

To counter this inaccuracy “I hear” this wheel on a stick “may” have been rolled on the ceiling to measure these “shaggy” apartments with popcorn ceilings and that wheel “may” have left a few tire tracks in its wake. That’s what I heard, anyway.

Thanks. I enjoyed that. pic.twitter.com/Oy8CYmwJUj

I got to speak with Lisa Abramowicz on her Bloomberg TV show “Money Undercover” yesterday. She is a great follow on Twitter. Best of all, I sat in a comfy chair.

Lisa mentioned the topic of “inventory loans” that developers are relying heavily on to limp to the next upcycle with lots of unsold inventory. Hedge funds have dived headfirst into this space, even developers who are in good financial state are lending money on unsold condo inventory. These loans are another way that financial engineering prevents the market from healing in the long run. This loan product reminds me of the actions of the Fed and FDIC a decade ago whose policy changes allowed banks to avoid “mark to market” so they wouldn’t be insolvent on their balance sheet. The goal is to sit and pretend everything is alright until enough time passes when everything becomes okay again.

While the interview was occurring, a real estate agent I know was walking down the street and saw me being interviewed via television sitting in a bank window. He emailed me a picture of it with a chuckle. The agent said he couldn’t hear what I had to say but hoped the news was good. Well, it is good news for South Florida property sellers. 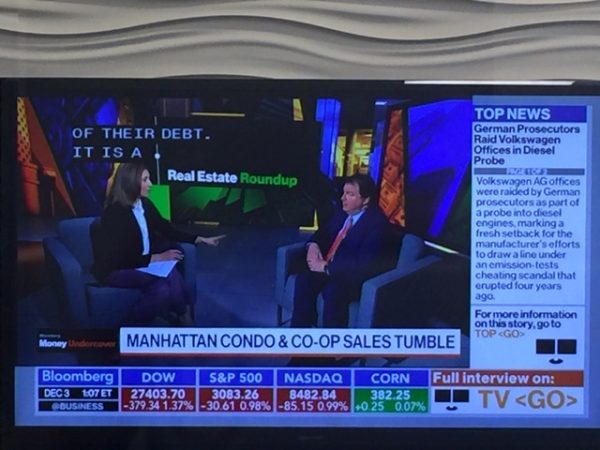 Deutsche: Homebuyers Are A Lot Older Today Than In The 1980s and Other Observations…

Some unbelievable analytics from Deutsche Bank…

The median age of US homebuyers in 1981 was 31. Today it is 47, see chart below and here. The rise since the financial crisis is particularly noteworthy. This is driven by an aging population, affordability, higher student debt levels, and tighter mortgage lending standards for young people and individuals with lower credit scores. All these forces have also contributed to lower levels of residential mobility. 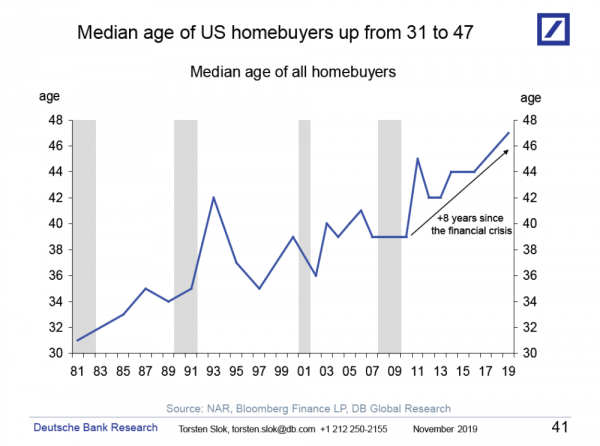 The chart below shows that roughly 10% of the population, or 30 million people, move to a new home every year, down from 20% a few decades ago. In other words, the US population is less and less mobile. This development started in the 1980s, and the financial crisis has not had any particular impact on the slope of the trend… 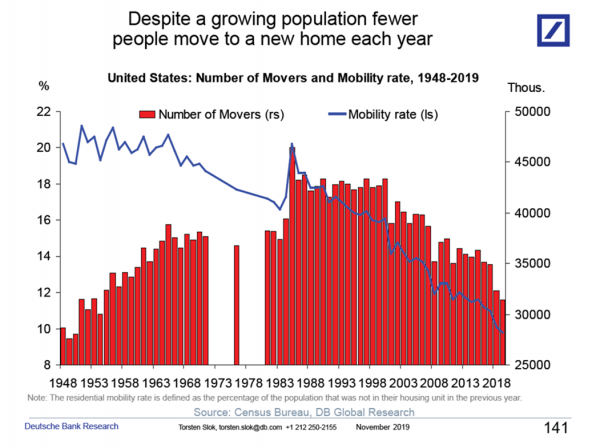 There is an elevated level of uncertainty in markets, but it has come down from a few months ago… 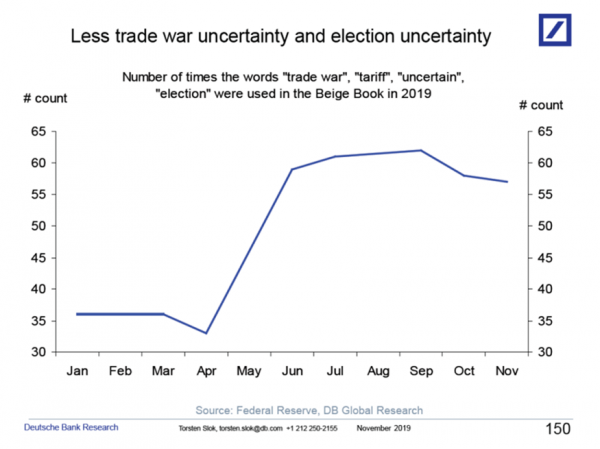 Shag Carpeting > Wheel On A Stick

For those of you that missed the introduction to these Housing Notes up above.

Appraisal Industry Big Data Can’t Validate Their Reason For Being

To those who say, “just throw more data at it to get it right,” certified appraiser Paul Chandler eloquently tells us in so many words that big data never will.

I encourage you to read his terrific article: A Perspective on AVMs

Following the presentation, I asked the following question: “Given that you are contending big data and artificial intelligence are much better today and you use FSD as a test to validate models, has your research shown that FSDs are improving over the years?”

The presenter’s initial response was, “good question,” followed by five minutes explaining how cool big data is and the importance of speed of execution. Of course, I had a follow up question, “I take from your response you have no evidence that FSDs are getting better, is that correct?” His response was, “yes, you are correct.”

A demonstration of how buildings of varying heights can be affected by seismic waves of different frequencies pic.twitter.com/Ad0UtZvXKw