UPDATE – in my rush to write this week’s Housing Note, you probably noticed I spelled “edition” incorrectly within the announcement email. Yes, I suck at grammar but that’s what makes me so darn lovable. Happy New Year!

I’m kind of glad that 2016 is nearly over. I’m looking forward to a clean slate and a fresh start. The question is, “how many days into 2017 will it quickly feel the same as 2016?” A good way to get in the right frame of mind is to commit to watching Nick Offerman’s ‘New Years Eve’ 1-hour non-action packed video.

Another key way to prepare for 2017 is to dribble around the opposition without mercy. This is a daily occurrence in Manhattan.

When in NYC, WATCH OUT FOR SURPRISE CROSSOVERS

Since I am respectful of the fact that many of my dear readers are already away for the New Year’s holiday, either physically or just emotionally, a lot of the content this week is force fed with podcasts and video. I know I could have copped out with a simple Happy New Year greeting and have been done with it but it wouldn’t be fun for me.

The one thing I have been obsessed this holiday season has been the incredibly tone-deaf behavior of my appraisal industry’s biggest trade group, the Appraisal Institute – the equivalent of NAR in the real estate brokerage industry. My posts here have created a massive membership backlash to what is known as “AI National.” For those interested, there is a whole slew of content in the Appraiserville section below. Otherwise, let’s get to this week’s Housing Note.

The Real Deal Magazine, with outposts in New York, South Florida and LA, gets their NYC reporters together for a sit down to recap the year in New York. Hiten Samtani, Managing Editor, Web at The Real Deal, leads the discussion. In his day job, Hiten is also a columnist, investigative reporter and an unknowing mentor of my not yet unlocked hipster style sensibilities. This is a must-watch for anyone in NYC real estate or curious about it.

Mansion Global, The Wall Street Journal’s online luxury real estate entity, reads these Housing Notes like you do. Beckie Strum wrote an article based on a spreadsheet I inserted in last week’s Housing Notes. It listed all the 2016 U.S. residential sales at or above the $50 million threshold. A few years ago, when “aspirational pricing” was in full bloom and press releases on very high priced listings became a national phenomenon, I began to track them and continually update them. For most of my life I have been a keeper of lists for no particular reason such as: celebrity properties we have appraised, the rhymes Walt Frasier says during basketball games, co-op addresses with hotel services, every car I’ve ever owned/leased and brand names of outdoor toilets on construction sites to name a few. For the latter, here’s a sampling for the curious:

Royal Flush
Johnny on the Spot
Jiffy John
Scottie’s Potties – we’re no 1 in the no 2 business
Gotta Go
Call a Head
Mr. John

Reflecting on The U.S. Housing Market

Here’s a 4:29 minute conversation between Laura Kusisto of WSJ and Ari Shapiro of NPR.

And another take on housing – on the “real” (get it, inflation adjusted?) story of rising home prices in the WSJ which is sort of the reverse of the notion that we reached the last market peak so therefore housing has recovered. I had written about that exactly a month ago on Matrix: Declaring A Housing Recovery Using A Threshold Based on Fraud.

Co-ops are losing battle with Condos

Over time, NYC luxury co-ops are not seeing the strength that luxury condos are seeing despite the oversupply of luxury new development condos. In the Bloomberg piece, they present a killer chart with our data (obviously). I like to say this about the Manhattan luxury housing market when explaining the softness of the older pre-war Park Avenue, Fifth Avenue co-ops…

new development is the new pre-war

And is the key reason why the luxury pre-war co-op market has been on of the weakest segments of the market for the past 5 years (during the new development boom). 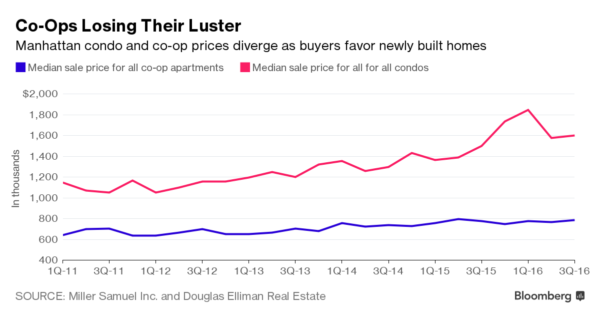 The author of the piece, Oshrat Carmiel of Bloomberg, breaks it down on Bloomberg TV and even gets in a comment about weighing your dog in the board approval process, when describing the resistance to luxury co-ops.

The other day I tweeted a post from McMansion Hell, a blog and a guilty pleasure of mine that critiques MacMansion design, the byproduct of the housing bubble.

A troll expressed disappointment in me yesterday for tweeting a post from a website that criticizes someone’s home or listing – specifically McMansions. I thought to myself, has this troll ever been on the internet until today (admittedly a weird question to ask yourself)? Coincidentally I was catching up on my podcast feed for 99% Invisible and saw this episode about McMansion Hell. It’s a terrific labor of love by the owner of it and I learned a lot from the episode [click on graphic below]. 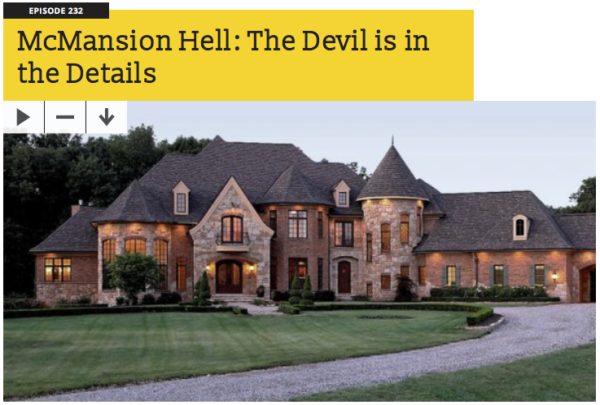 For my dear readers of Housing Notes who happen to be appraisers or in related industries, you may have noticed my outpouring of content on the damaged culture of the Appraisal Institute (AI National) across these Housing Notes, my Matrix Blog and my new bulletin board site – Real Estate Industrial Complex or REIC for short.

I felt that AI National’s policy to transfer most chapter funds into their control was outrageous and it became apparent to me that this damages the credibility of the appraisal industry as a whole. The proliferation of content on this topic is not an attempt to take down AI. It is an attempt to show AI National’s damaged culture of political self-dealing and lack of focus on members needs. I do this with the hope that their leadership culture can be fixed. I am being inundated with calls and emails from membership who are sharing their insights.

I have more stories in the pipeline, so I hope you don’t mind the singularity of my Appraiserville content at the moment. I feel we are at an important industry crossroads for residential appraisers and I don’t want us to miss it by relying on an organization that has largely ignored it’s own residential appraisers for years.

Here are some things to read over New Years (on my sites) from the past week:

If you need something rock solid in your life (particularly on Friday afternoons) and someone forwarded this to you, sign up here for these weekly Housing Notes. And be sure to share with a friend or colleague if you enjoy them. They’ll become real estate obsessed so you’ll have someone to talk to, you’ll find out that the NY Post gave me a shout out for keeping the real estate industry honest, and I’ll be anointed with the best job title ever.