The Housing Market As A Donut Hole, Holiday Mall Edition

About six years ago I tried to convince others that the Manhattan housing market was a “donut” – vibrant in the starter market and relatively strong on top, but soft in the middle. A few people suggested that a barbell analogy was more accurate, but hey, I like donuts. But now with rising mortgage rates, we are seeing early signs of a sales slowdown in the starter market. But donut hole sales continue to hold their own. Even HUD mentioned a “donut hole” analogy…

Whatever this all means, I suspect with all the holiday decorations it will be tough to focus on any form of intensive donut analysis.

Getting Malled On Video

I hate going to our local mall, especially around the holidays. I’ve written about this before, but malls were an important part of my childhood. When we lived in Delaware in the late 1960s, the big brand new Blue Hen mall in Dover, an hour away, was the only place to buy most of our clothes and basic staples. That mall has now gone under and is being re-used as something else. Later when we moved to the Maryland suburbs of D.C. the big new Montgomery Mall was the regular place to go. In fact, when I was home for the holiday break during my college freshman year, I walked through the mall looking for work and landed a 3-week busboy gig at a Greek restaurant.

Later on in my life, I used to go to the Stamford Town Center mall all the time to run errands. Then big box stores entered our local market, Amazon gained critical mass and now I visit it only a few times a year, mainly to the Apple Store. I always find the mall visit depressing so I avoid it all costs.

Nationally malls are failing much faster than being created. A report by Credit Suisse estimated that 20% to 25% of malls would shutter over the next five years, largely because of store closures. Currently, there are about 1,100 malls nationwide.

However, there are some that yearn for the old days. I’m not one of them but I can see how impactful growing up with them can be to some.

The first video was made in 2007 and covers the folks who created DeadMalls.com. Periodically, I check into the DeadMall YouTube feed for a quick update. It is mindboggling how much space goes unused. The second is a 2009 documentary on the shift in retail patterns away from malls. It is super depressing.

Combined Apartments Can Be The Single Best Thing

For my entire 32-year appraisal career, our firm has been valuing combined apartments. I came up with the saying “1+1=2.5” to reflect the value premium enjoyed by purchasing two adjacent apartments, whether or not they were combined. The premium varies widely based on the size and configurations of the apartments. This premium doesn’t apply to all combos but since there is a Manhattan premium for larger contiguous space. I’ve found that once the total size approaches 7,000 square feet, there is no premium, and in fact, the impact on a price per square foot basis often falls.

In my own experience, these are the issues and observations with combos: 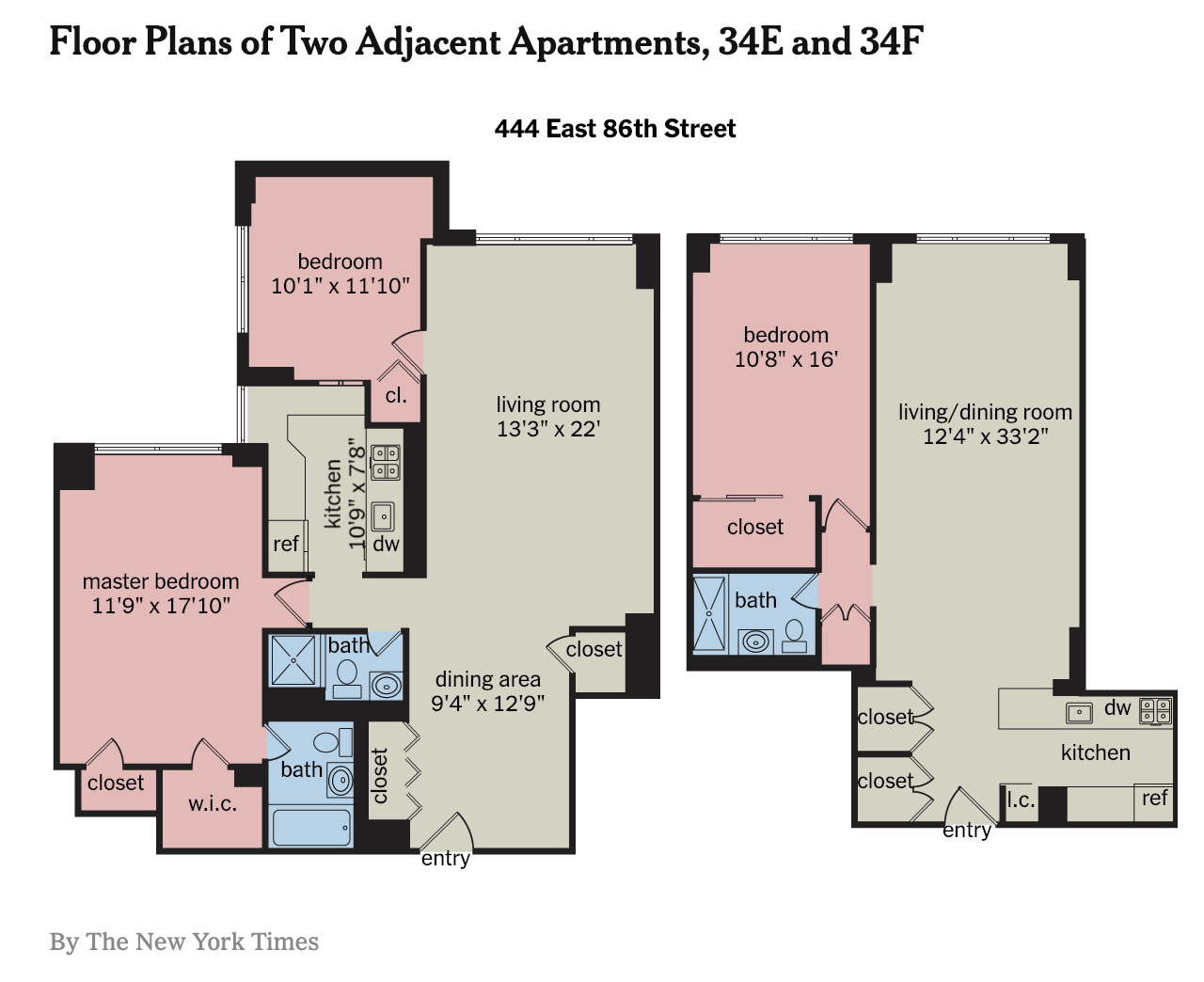 The following two posts were shared earlier this week on my Matrix Blog.

As always, I had a wonderful conversion with Vonnie Quinn, anchor of Bloomberg TV’s Markets this week. It was a lengthy interview where we discussed national and NYC metric trends. The following portion covered the Amazon HQ2 story in Long Island City, NY.

The Winter 2019 Issue of Elliman Magazine was just released. I provided a two-page spread showing various market tidbits on random U.S. markets where Douglas Elliman has a footprint. The magazine is well done and a good aspirational read. 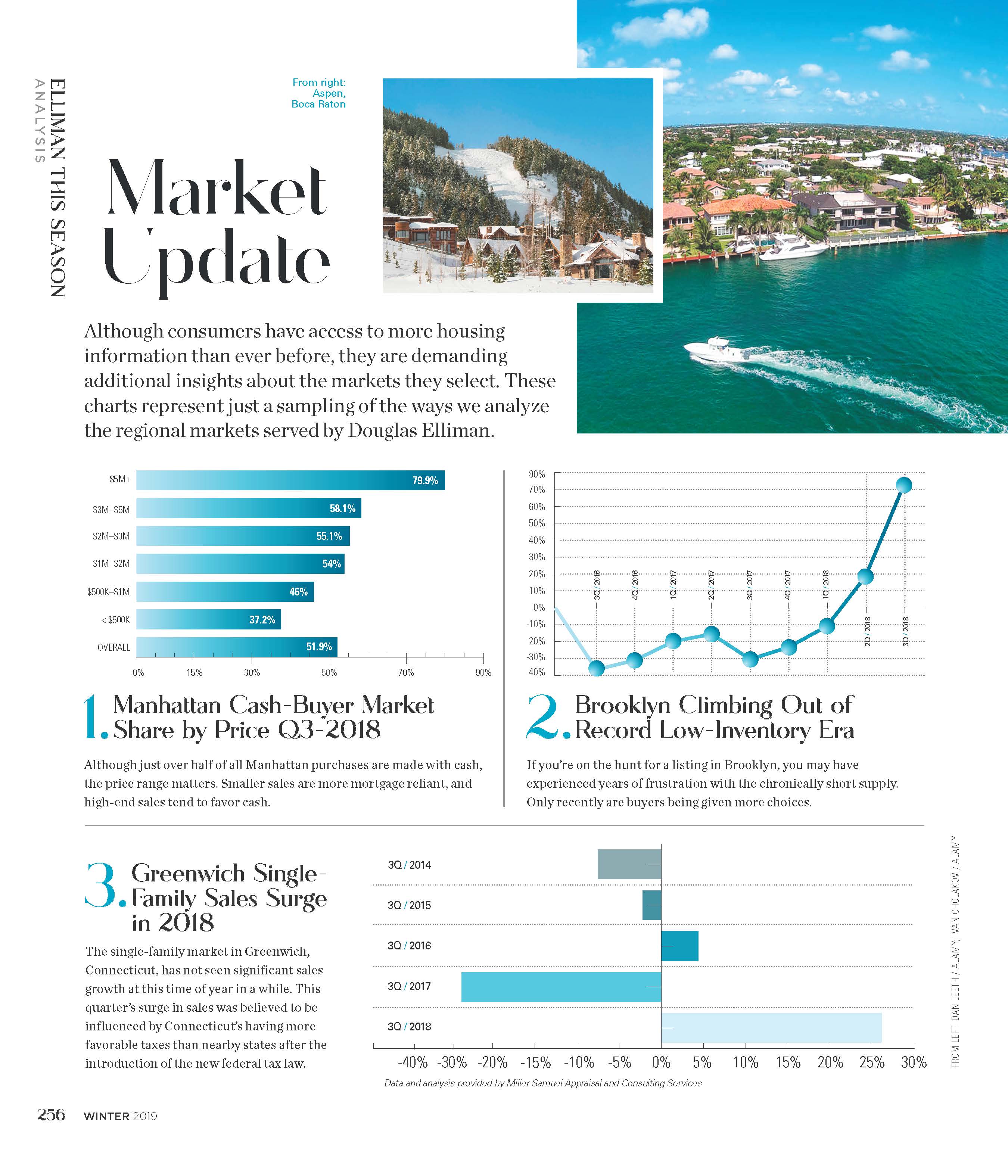 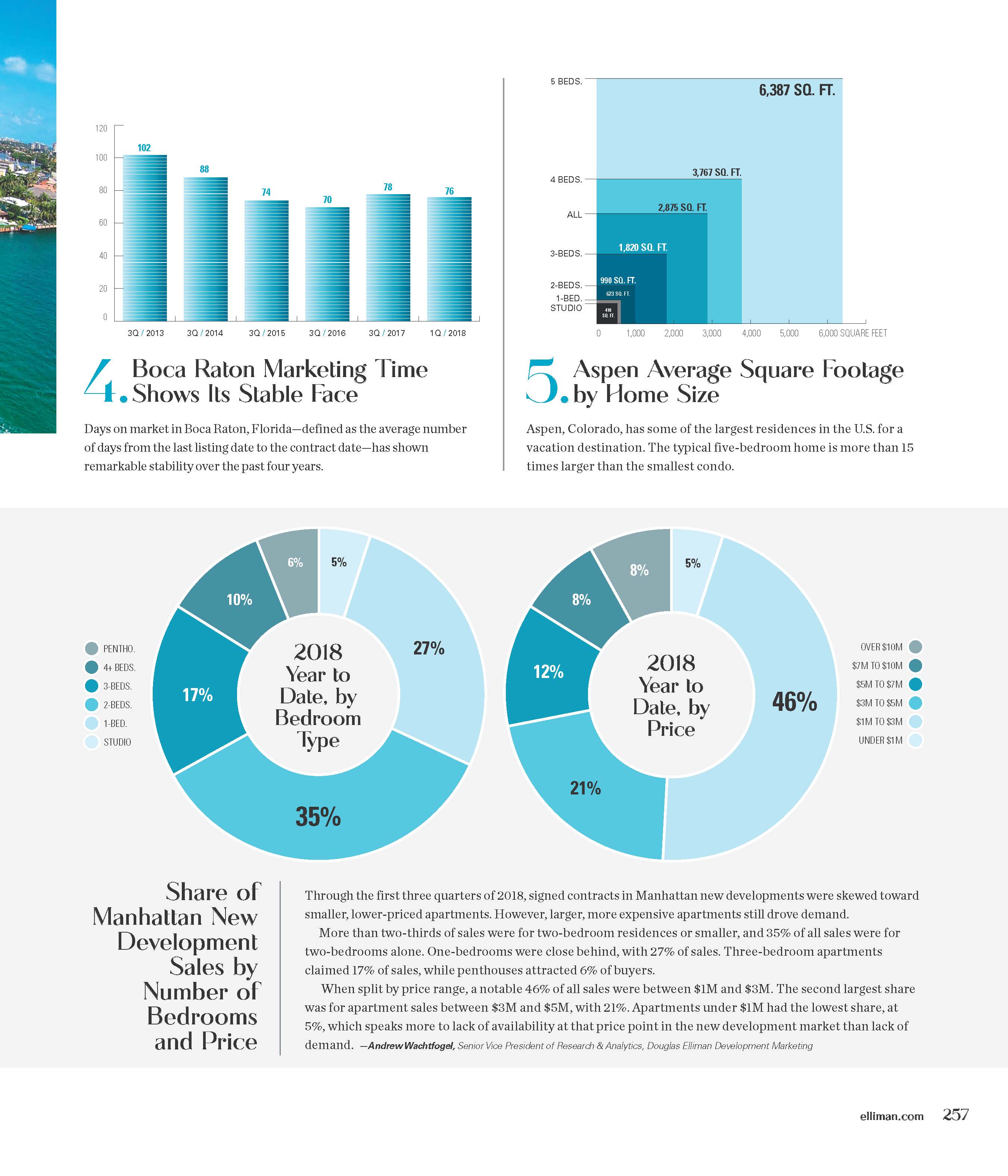 Favorite charts of the week. Time to look at the aggregate of the 5 boroughs: 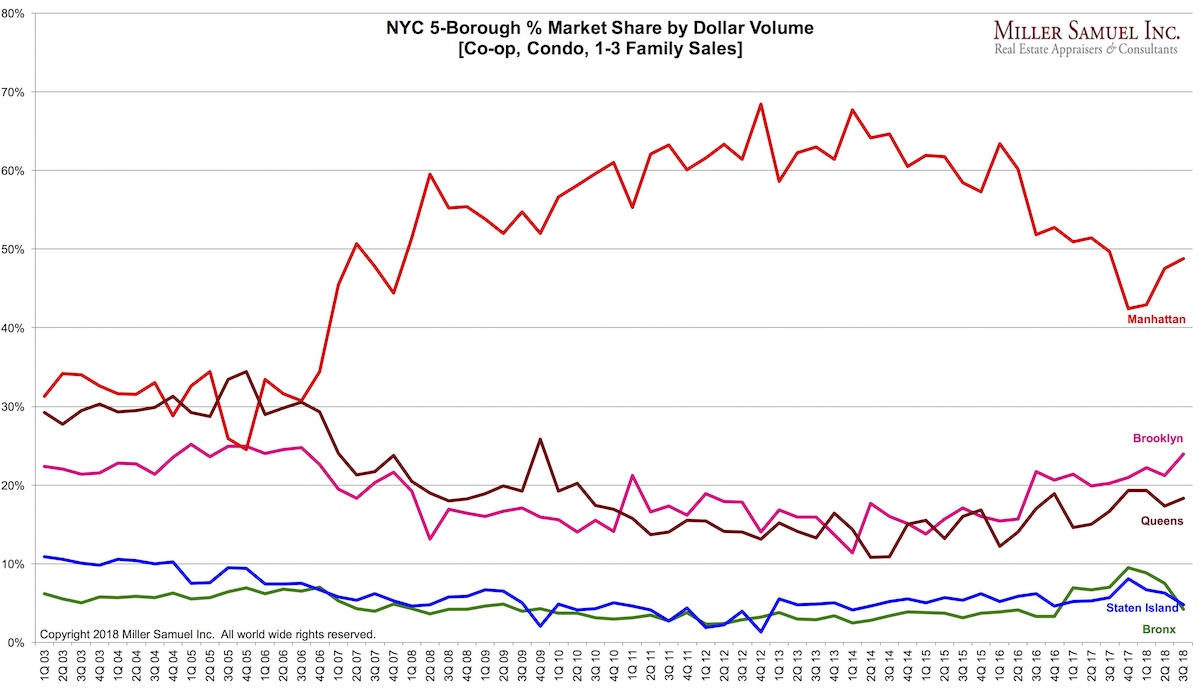 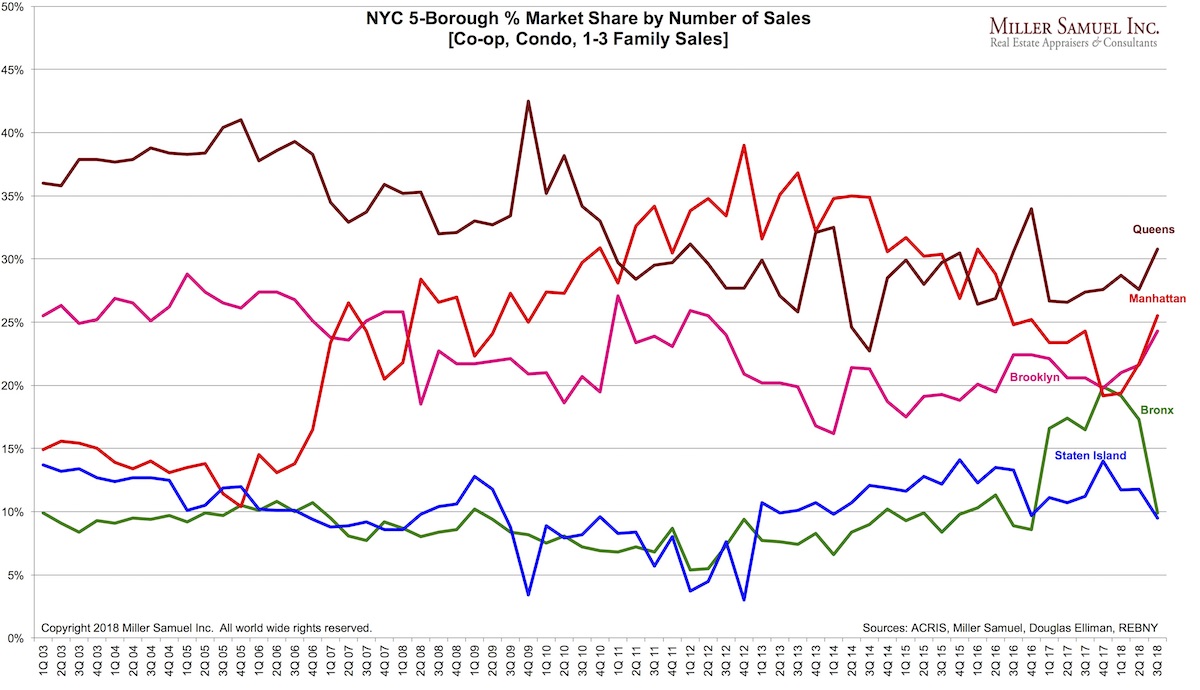 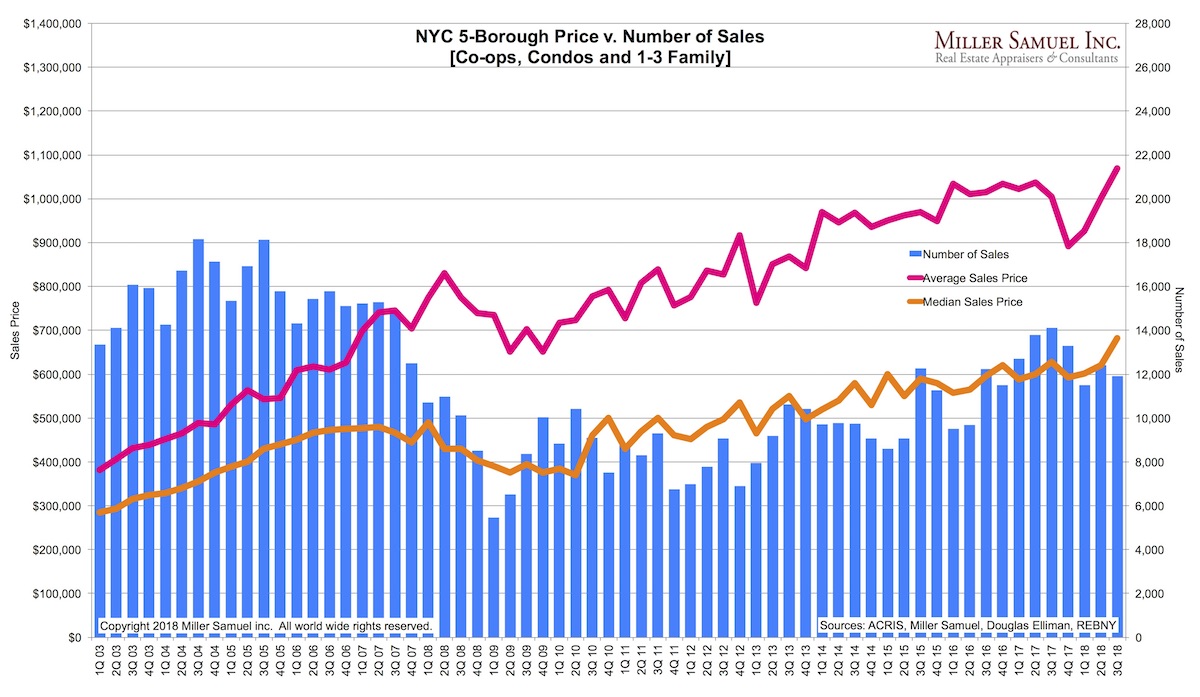 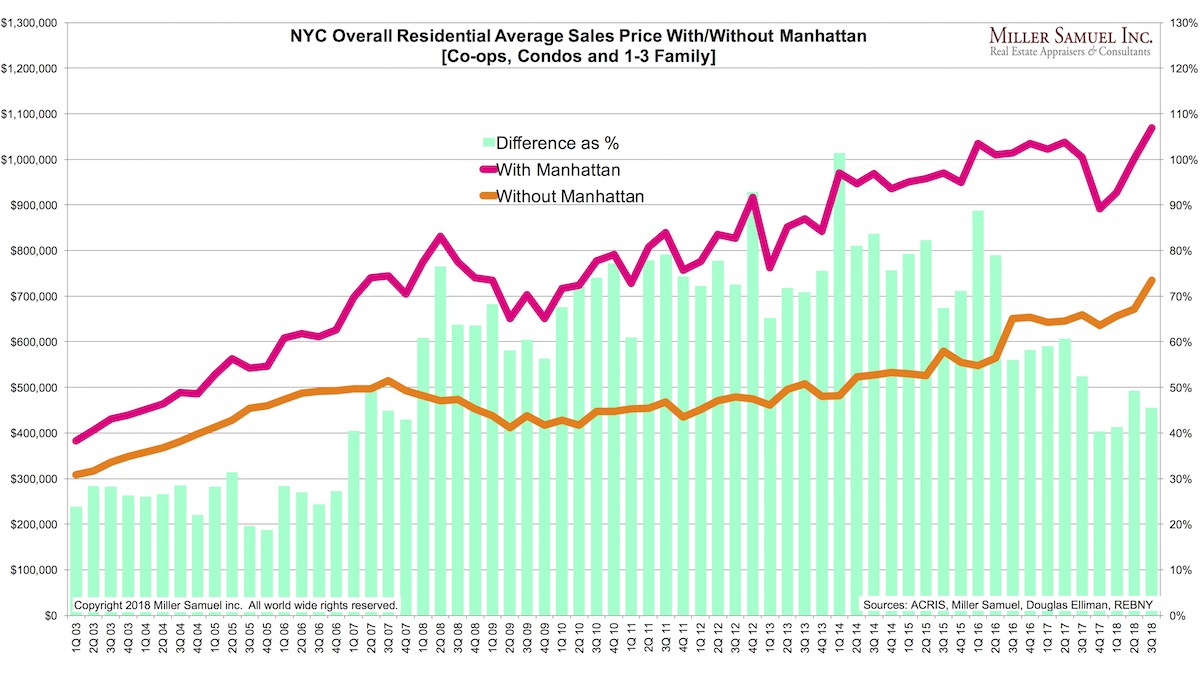 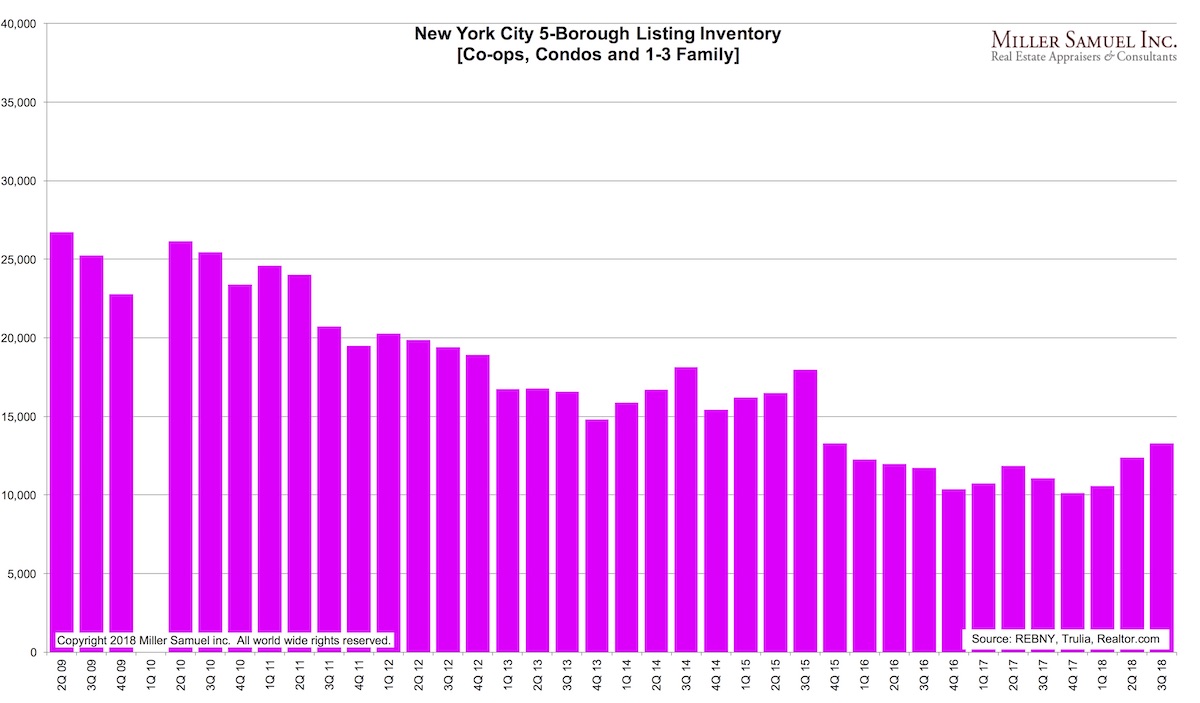 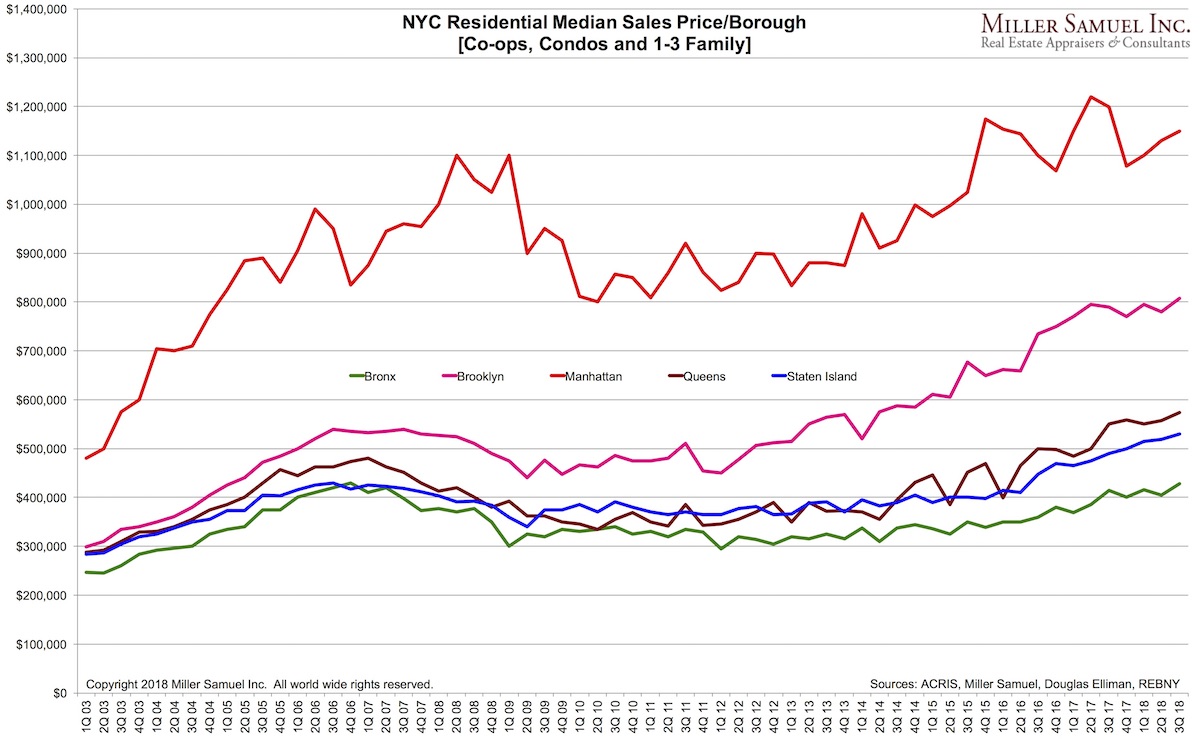 An Extraordinary Year For Appraisers

Remember that appraisers are here as the last line of defense to the consumer and to the taxpayer, yet we have a limited voice. Our progress for more transparency in 2017 & 2018 showed us we could have more of a voice. In 2019, we will continue to more effectively press the quality concerns that are being driven into the ground by most existing insitutions after moral hazard was established in all the 2008 bailouts.

Yesterday, I sent out a message about a Fee/TT quote conversation I had with an AMC clerk.

I’ve received a number of responses from appraisers across this fruited plain who said often they will receive Fee/TT quote requests for the SAME property from MULTIPLE AMC’s. That corroborates stories I hear from appraisers I talk with at conferences.

The entire AMC situation is a giant time-wasting game that really doesn’t benefit the borrower at all, and least of all, appraisers. Lenders are the coaches in this game.

Another message I got today caused the tiny little light bulb in my gray matter to explode in brilliance. The last paragraph is key to the raising de minimus shenanigans being promoted lately, backed by….you guessed it…..lenders:

“What you may not see is that there are Lenders that also agree with your statements. However because of all the noise, miscommunication and regulatory interference everyone is starting to just give up and/or default to a legacy AMC model and then micromanage the process. Those same lenders will be the ones that jump on the De Minimis increase and eventually be insolvent at the next market crash.

The De Minimis level was raised to solve a regulator burden created by Regulation, they can’t roll it back so they just make the filter larger.

Prudent Lenders will still get appraisals, the real question is what kind of appraisal? One that complies with USPAP or one that Doesn’t, and who is going to prepare it. Evaluations still require a level of competency under that Regulatory requirement.

Keep in mind USPAP is a road map to a repurchase lawsuit, a non USPAP appraisal isn’t. Lenders are tired of paying legal expenses for USPAP experts to line up in a courtroom and argue if a report and the appraisers workfile complies or not.”

In other words, USPAP is an impediment to the financial bottom line for lenders. To avoid spending thousands to millions of dollars going after licensed appraisers over allegedly faulty appraisals, they are attempting to get the de minimus raised so that EVALUATIONS used to value properties won’t face the same investigative and legal issues.

~ EVALUATIONS do not have the same regulatory burden as appraiser’s USPAP compliant appraisals.
~ People who perform EVALUATIONS are not licensed by the states.
~ “Competency” is mentioned in the Agency regulations, but who monitors that?
~ EVALUATIONS may not cost as much as a regular appraisal.
~ People who do EVALUATIONS may not have the high level of property analysis training as appraisers have.
~ When faulty EVALUATIONS are produced, it will be up to the borrower to bring charges against the lender – which probably will happen less frequently than lenders going after appraisers. So the lender will save money on legal defense.

The other issue here, that just dawned on me, is what do lenders call property valuation costs when a borrower applies for a mortgage loan? All lenders have a line item on loan requests for “appraisal cost.” Appraisal is a legal term that has a specific meaning. By regulation, the ‘appraisal cost’ must be identified to the borrower up front, after the time of application.

But if the lender is NOT actually going to use an APPRAISAL for property valuation (due to prospective value below the maximum de minimus amount), the fee should not be termed ‘appraisal cost.’

Secondly, due to differing production costs, will the fee charged the borrower be equally the same for both types of valuation reports, even though the EVALUATION probably costs less than an appraisal?? Is the lender pocketing the difference? (Pocketing any portion of the borrower paid fee for ‘appraisal’ didn’t use to be allowed; I’m not sure how that currently applies since D-F was signed into law.)

It’s all about the angle you work: