Examining The Fabulous Housing Market Without The Flossing

First, let me get a little bit of #weddingtalk out of the way:

As I mentioned in the previous installment, I attended a nephew’s wedding in the Midwest and took a little time off (as I write this Housing Note I am technically still on vacation). Over the past week, two of my four sons became engaged (that brings our sons’ engagement ratio to 75%). They both proposed in the same time zone but one in the Northern Hemisphere and one in the Southern Hemisphere as well as one on the beach at the Atlantic Ocean and one on the beach at the Pacific Ocean. That’s pretty cool. In addition, we have three more weddings to attend in the next three months, including my oldest son’s wedding in my backyard and two more relatives in the midwest. In case you were wondering, I’ve been married for 32 years. #weddingtalk

But I digress. Here is another important issue…

My roommate from college is my best friend, a homeowner and more importantly, a dentist. I can only imagine him going apoplectic on the big AP news story this week – that the medical benefits of flossing is unproven and therefore flossing might not be really necessary. One of my favorite podcasts Surprisingly Awesome gets rid of yesterday’s meal:

What does this have to do with the housing market? Give me a minute, I’ll come up with something.

Speaking of flossing, here is a quote of mine in a Manhattan townhouse listing one of my appraisers spotted. While the numbers are accurate, the quotes and words are not – a combination of the source and the sourcee. To all my loyal Housing Note flossing and non-flossing readers: I have never, ever, ever used the word “fabulous” to describe anything to do with the housing market or anything not to do with the housing market, anywhere, at anytime…until now so please read on.

The use of the word “fabulous” is more often used when there is limited transparency, such as the Steve Roth on Vornado’s 220 Central Park South project. His mistake was hyping the performance of the building early-on and his lack of consistency in communication of the building’s absorption rate simply creates an assumption by market participants that sales have nearly stalled.

Roth acknowledged a slowdown in sales earlier in the year, but claimed it ended a few months ago. Sales are going “fabulously well” and exceeding Vornado’s expectations, he said. “There has never been a project in New York that sold as well.”

‘Land’ is a four letter word

I called in to Kathleen Hays and Pimm Fox on Bloomberg Radio’s ‘Taking Stock’ yesterday where we discussed a seminal Bloomberg News story: Manhattan Luxury-Condo Glut Ends Developer Rush for Land Deals by Sarah Mulholland and David Levitt. They chart data from Ariel Property Advisors, who I am a big fan of as a role model for the way commercial real estate research should be presented.

Let’s revisit what land really means in the housing market. Here’s something I wrote for Bloomberg View on November 11, 2014 that went #1 on the Bloomberg Terminals and was the #4 most popular read on Bloomberg.com (readers must have thought it was fabulous):

Unless you live in a cave, you’re no doubt familiar with the outlines of the housing bust that marked the beginning of the financial crisis: Real-estate prices plunged, people lost their homes, banks went under and the economy tumbled into a recession. We are still grappling with the hangover.

There’s only one issue with this narrative: Housing prices didn’t fall that much in the meltdown, or at least the value of physical structures didn’t fall much. It was the price of land that imploded. See the chart below: 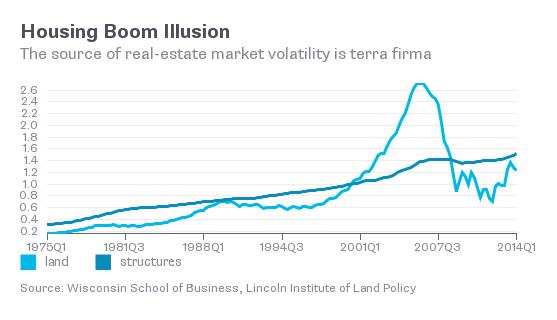 In advanced economies, rising land values have been behind as much as 80 percent of the real-estate price gains since 1950. U.S. housing prices increased about 650 percent during the past four decades and most of that gain was due to rising value of land.

One thing rising land prices help explain is the tear-down phenomenon — when a small home is replaced with a larger home. A more valuable piece of land can justify a larger, more expensive home. That’s also one reason why the average size of a U.S. home has increased almost 60 percent during the past four decades.

So next time someone says they can’t believe how much housing prices have risen — or fallen — tell them to blame the land they’re standing on.

Forget Dumpster Diving, The Scourge of Cities are Dumpster Pools

The City of Philadelphia is cracking down on… dumpster pools h/t Oshrat Carmiel It cleverly avoids the none to negative impact to value of above ground pools.

However with the eventual downshift in new residential construction, this seems like a fabulous alternative use of construction roll-offs (dumpsters). 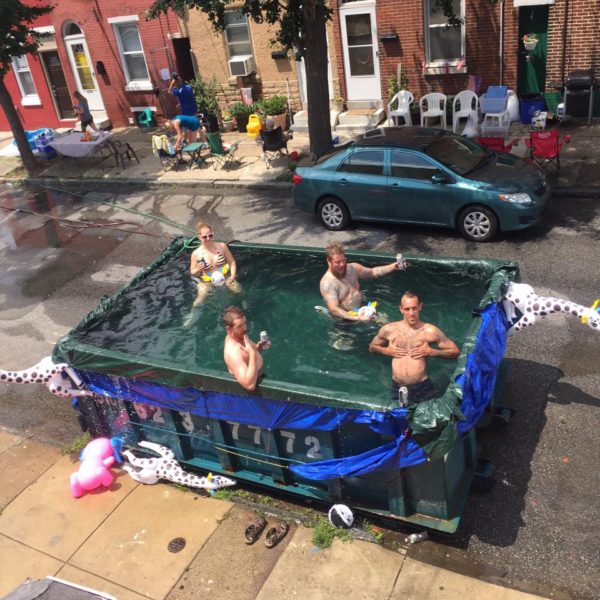 More on the housing development stall

There has been a lot of eye opening in the housing industry this year after at least two years of wearing blinders in the fetal position. The mad rush to build a lot of new housing product skewed to the high end of the market is now not looking as smart as it once was. New York luxury condo prices corrected as much as two years ago which is why absorption has been so slow.

Some developers in New York have done well despite the slow down, but its not a secret how they do it. Offer product outside the over-saturated locations and segments and re-price existing offerings to the new market condition…and then units will sell. The current stall has been created by sellers who are unwilling to adjust prices downward to the new market. I’ve said this many times in these Housing Notes.

We are seeing prices begin to fall in overbuilt markets like downtown Miami:

That’s not likely to change in the near future, either: Integra’s report shows another 5,508 rental units are under construction and expected to open within the next two years, with 8,483 more apartments in the proposal pipeline for the greater downtown area alone.

I think those Miami flippers are going to be very disappointed. Last cycle’s carpenters and nurses have been replaced by Wall Streeters. And it’s not just about condos. Miami-Dade county is expected to see the largest influx of rentals in 17 years that are pressing rents lower.

Downtown LA is also seeing heavy new rental product enter the market, raising the use of concessions by LA landlords.

The new dynamic, Basham said, can be chalked up to simple supply and demand. In the last year and a half, more than 3,700 apartments have opened downtown and an additional 6,260 are currently under construction, according to real estate firm Transwestern.

The New York Times real estate cover story focused on the topic of closets. They are getting bigger. But not because homes are getting bigger. They are growing faster than the size of the properties themselves. I saw this in my research of the Manhattan condo market – here’s me quoting myself which is pretty fabulous.

Jonathan J. Miller, the president of the appraisal firm Miller Samuel, estimated that master bedroom walk-in closets in top new apartments are nearly 30 percent larger than they were in the last development cycle, before the financial crisis of 2008, while the overall size of those apartments has grown by only about 10 percent.

“When I started in the mid-80s, closets were few and far between — very tight, not very deep, and not a lot of walk-ins,” Mr. Miller said. “It’s the polar opposite now.”

It makes sense. Buyers of these units probably have a lot more stuff to keep and the self-storage industry is booming. Why not keep it in your closet?

Appraising can be fabulous, but when an appraiser is pressured by a client in an inappropriate way, the appraiser needs to reach out and complain. Per the Federal Reserve Regulation Z Truth in Lending Act [bold – my emphasis]

The Dodd-Frank Wall Street Reform and Consumer Protection Act of 2010 (Dodd-Frank Act) amended the TILA to include several provisions that protect the integrity of the appraisal process when a consumer’s home is securing the loan. The rule also requires that appraisers receive customary and reasonable payments for their services. The appraiser and loan originator compensation requirements had a mandatory compliance date of April 6, 2011.

As my friend, appraisal industry leader (and accomplished bad joke teller) Tom Allen of Oklahoma gave me his message to the appraisal community: “Don’t be afraid to file a complaint or voice your opinion.” And file complaints early and often (I paraphrased what Tom said using his style) when you are being pressured.

This hotline is not a one time thing but a tool provided by the federal government to give appraisers a voice, something we don’t have through lobbyists that deep pocketed financial institutions have used against the industry for the past decade to disastrous effect.

The letter below is the response by the Federal Reserve to a letter from the 25 state appraisal coalitions (who seem to be the only entities who actually work on the appraisers behalf these days and have been very effective) in regards to “reasonable and customary fees.”

It is important that the appraisal industry uses the link to the Appraisal Complaint National Hotline and follows the process for filing complaints. Instead of whining about it (like I have been known to do), it is important that you take action now. I’m told the regulators are very interested in hearing from appraisers about the fee pressure our industry is subjected to, especially from the controversial appraisal management company [AMC] industry. 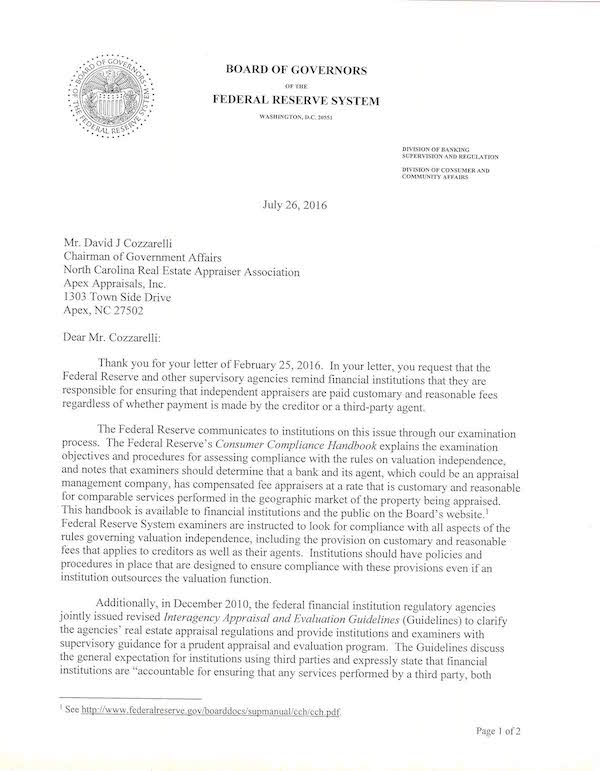 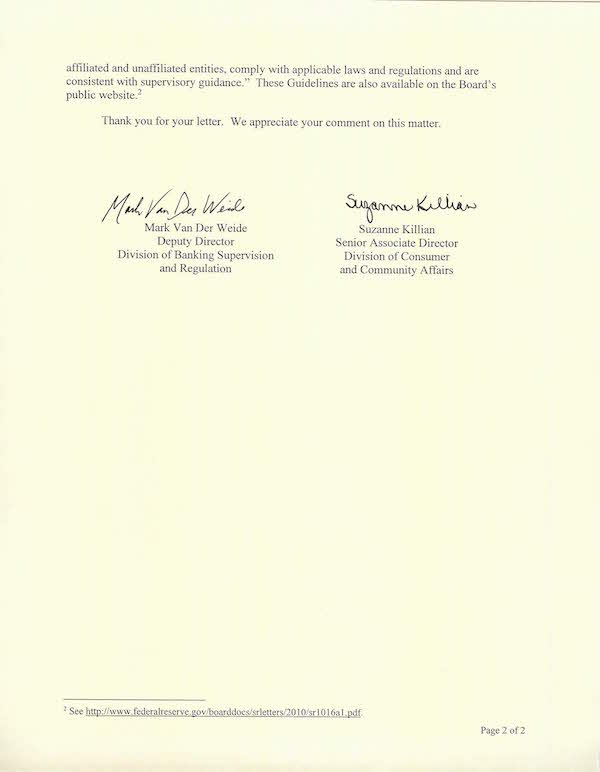 If you need something rock solid in your life (particularly on Friday afternoons) and someone forwarded this to you, sign up here for these weekly Housing Notes. And be sure to share with a friend or colleague if you enjoy them. They’ll feel better than a wind turbine on fire, you’ll fly faster than a pigeon on the highway and I’ll feel fabulous.