Reflecting On Housing History a.k.a. What’s in the Fridge?

My wife and I just returned from vacation (reverse-vacation-commuting so to speak) and were well-rested, happy and rejuvenated until this…nothing good was to be found in the fridge. It made me want to…

How The Luxury Market “Feels” Across NYC Metro

This weekend’s New York Times Calculator column in the real estate section uses our absorption (months to sell) data across the region to illustrate the pace of the luxury market in each of the areas (their respective top 10% of sales). It brings to mind that tired old phrase, “every market is different.” Notice the wide range of starting luxury thresholds for each of the markets covered. 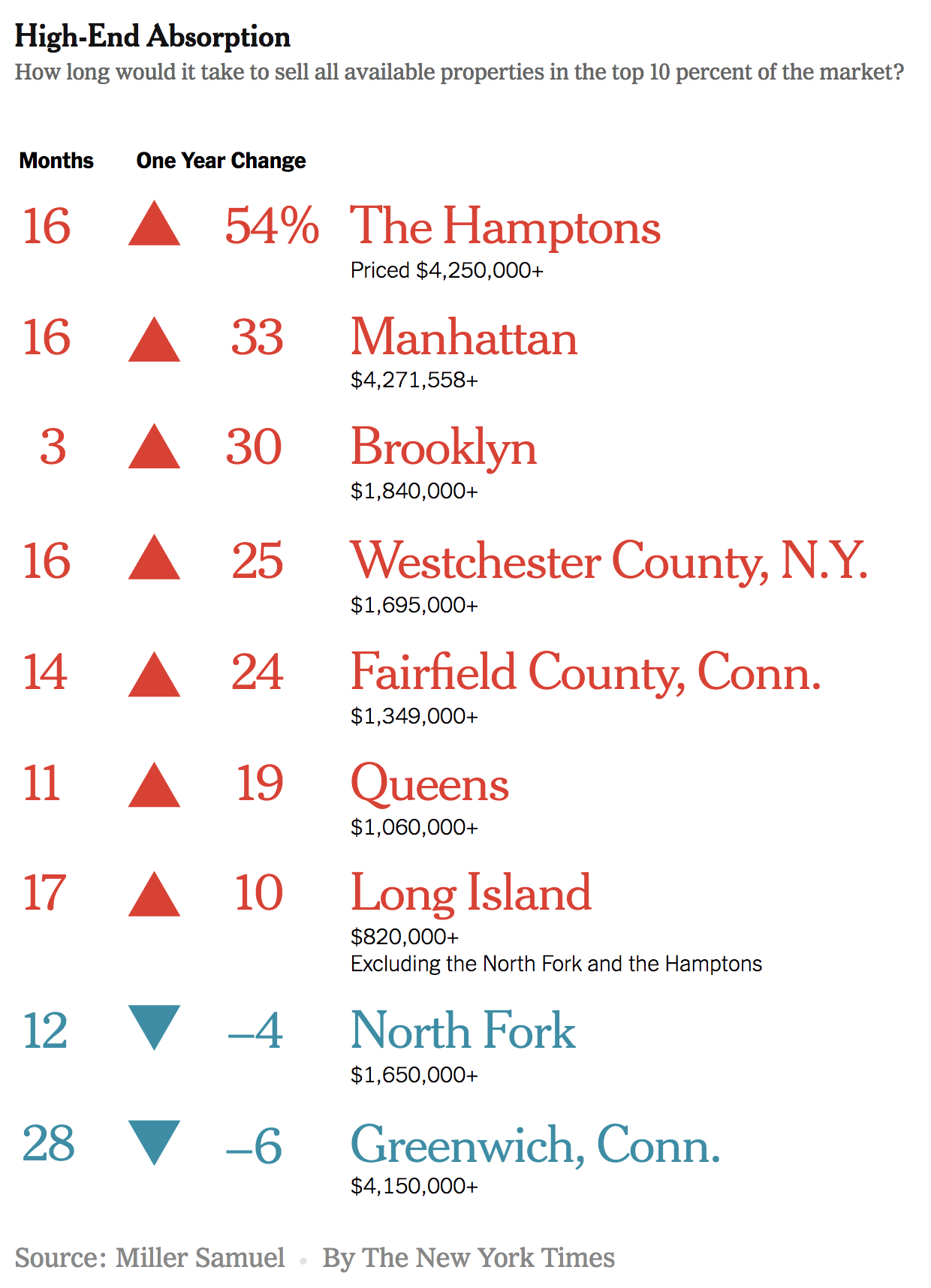 I’ve always marveled at the art of re-orientating perspective to sell the same asset. Used cars are “pre-owned.” In China “pre-owned” houses are actually called “used.” In the U.S. pre-owned homes are called “existing” or “re-sales.”

In the marketing of Manhattan properties, the sales language is changing as the market cools.

I divide the language of selling into three categories: re-orientation, yelling, free stuff

In the realm of changing orientation, my favorite phrase is “price improvement” as a replacement for “price reduction.” The switch in phrases coincides with the switch from seller’s market to a buyer’s market. The change in terminology reflects who has the upper hand in the market. A buyer gets a price improvement and a seller gets a price reduction so in a buyer’s market (I do hate that description but stay with me on this), the new price is more favorable to the buyer since it has been lowered so that is what is featured.

Yelling suggests urgency and there is a lot more of that. ALL CAPS and exclamation points are on the rise as supply increases. The need to stand out becomes more critical.

Free stuff, like cupcakes or even free cars, raises traffic but in reality, I am skeptical if they raise the quality of their leads. However, they bring attention to the listing and more traffic which helps the agent convey to the seller that they are doing something to enable a future sale in the slow market. More supply = more cupcakes. And then I wonder – in a cupcake surplus, will that tighten the housing market? I wonder.

Sometimes even discounts need extra sweetening. Magnolia Bakery cupcakes were part of the deal for the first 12 visitors to an open house for a West Village townhome that in May got a cut to just below $10 million.

Think of the logic for a second. The person willing to spend $10 million on a home will be drawn to the opportunity to eat one of twelve cupcakes that cost $56. It seems ludicrous, but showing “action” to sellers in the current market is the agent currency of the day. 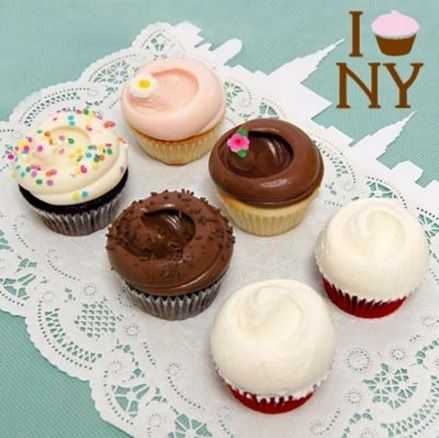 Curbed has a great long-form read with epic illustrations and my only criticism is the SEO-centric title: 10 years after the financial crisis, is the housing market still at risk?

The topic of the story is actually the subtitle: “Why the housing bubble caused a crisis—and what’s different now“

I learned a new phrase in this piece – “Scratch & Dent RMBS” that wasn’t explained in the article so I looked it up at a Fitch Ratings from a 2009 press release:

Because the GSEs only buy qualified mortgages, the remaining crap is issued by private institutions. It only accounts for 5% of mortgage bonds today and the other 95% is issued by the GSEs. During the bubble, non-GSE issuance was far higher.

The low bond share since 2008 represents why mortgage underwriting standards remain so tight, as institutions hold a lot of mortgages in their own portfolios. 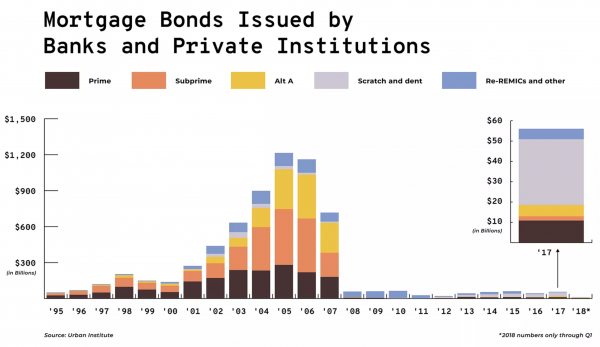 And there is an epic infographic in the Curbed piece. Click for massive image. 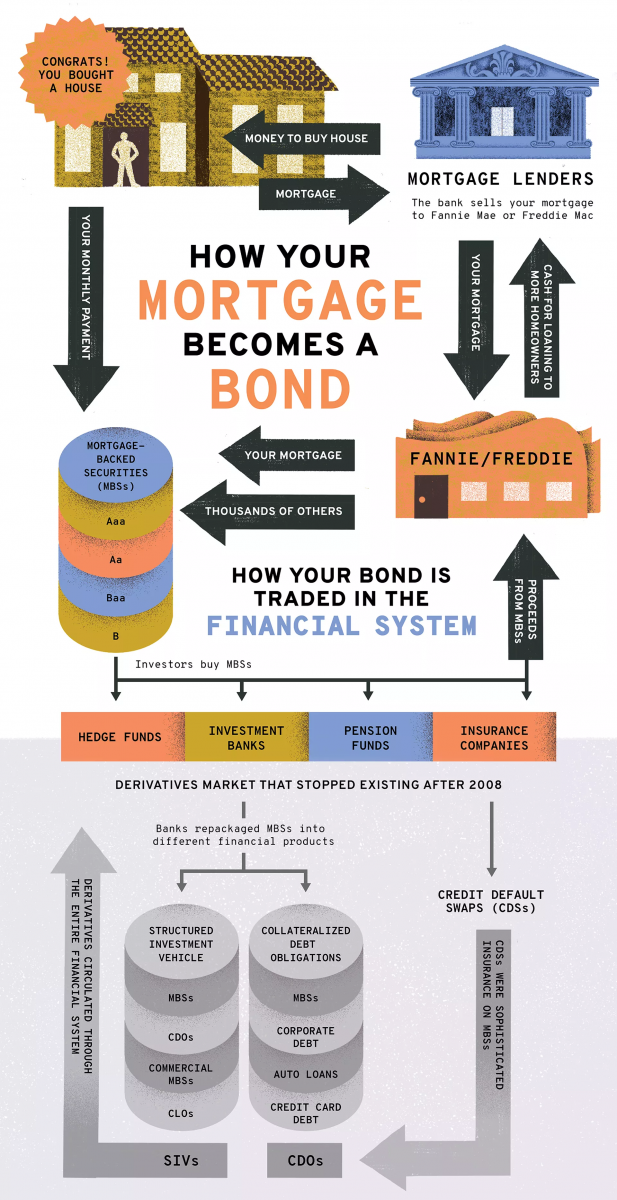 I came across a New York Times piece that looked at price trends as indicative that there has been no real impact from the new federal tax law on the housing market. The Trump Tax Cuts Were Supposed to Depress Housing Prices. They Haven’t.

It was a rehash of a Ken Harney piece in the Washington Post on June 13th: The new tax law was supposed to cause a slump in housing values. It hasn’t materialized — yet.

Relying on price trends is the same flawed logic used during the housing bubble. Pick any market back then. Housing sales fell sharply eventually leading to a sharp drop in prices. Peak prices nationwide were seen in 2006 while peak sales were achieved a year earlier. I continue to be amazed at how this continues to be missed in economic circles.

Think of a seller anchored to a ridiculously high list price. It takes them 1-2 years to de-anchor and not feel like they haven’t left money on the table. What happens when a housing market is exposed to a federal new tax law overnight? The sellers continue to demand their price and a rising number of buyers opt not to pay it. In other words, sales decline first. This is exactly what is happening in high tax, high-cost states right now.

And it is true, the new federal tax law likely won’t have any real impact in 80% of U.S. markets because of their much lower housing prices, mortgage amounts. property taxes and SALT. The doubling of standard deductions made it irrelevant. But let’s not proclaim the same goes for the entire U.S. when without too much effort you can see the slowdown in real-time in high-cost markets. This article treated the national housing market as, well, a single market. The new federal tax law, as far as housing goes, was designed to have the most impact on high-cost housing markets such as those found on the west coast and the northeast and the reform aspect centered on reducing the amount of itemization. 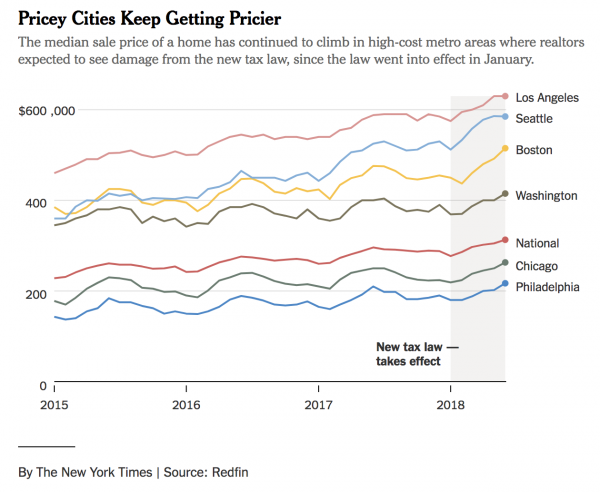 We are seeing slowing sales in the northeast and west coast right now, 9 months after the law became effective. Price trends are not a reliable basis for the premise being suggested in this piece. Here’s how it goes:

In other words, 9 months is way too early to be calling for no impact. We can see it happening in NYC right now.

A Traditional Broker Branded As Tech Continues To Confuse 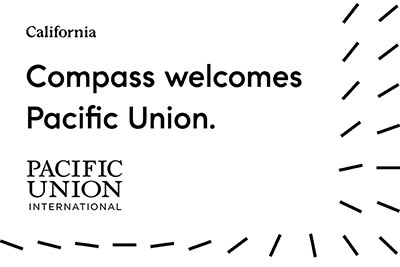 One of the theories making the rounds is that this was a “hostile takeover” which if true would be the first in the industry. The theory goes that the majority partner of Pacific Union is an investor at Compass and forced the sale. This theory does seem to explain the bizarre-out-of-the-blue announcement.

Shortly after, The Real Deal scooped that:

At a meeting on Thursday in San Francisco, Compass CEO Robert Reffkin told a group of agents that McLaughlin, Pacific Union’s CEO, “will only oversee Pacific Union agents.” Compass agent Lisa Sockolov, a former Pacific Union broker who attended the meeting, provided The Real Deal with that account.

That is really bizarre as well. I suspect one of the early warning signs that this deal would be a problem may have been that many agents were considering fleeing the company almost immediately if Mark wasn’t at the helm somehow.

One one hand, who cares?

On the other hand, this behavior damages the industry because it is not a real disruption of innovation, but rather a disruption simply powered by a large amount of money without a sustainable business model. I’m not saying that Compass can’t be great, but that doesn’t seem to be the holy grail. Their loyal agents praise their marketing prowess. But throwing high fee splits at an agent for one year doesn’t ensure retention nor does it ensure agent adoption of their technology.

I’m giving appraisers a break this week so you can use the time saved reading and sign up for the RAC conference coming up on September 13-14th in Plano, TX (Dallas). It has always been a productive and fun conference for appraisers and best of all it’s not expensive nor do you need to be a member of RAC (but we’d love you to join our growing ranks!)

C’mon! Click on the graphic for more info about the conference.