Housing Some Ambitions? Use Down Time To Improve

(Did you see what I did there?)

So-called “experts” can take a while to catch on to changing conditions. Jim Cramer (we used to go to the same dentist) had a meltdown in 2007, a full year after the housing bubble began to burst.

Then I saw this on my Twitter feed (h/t @ritholtz) and thought a lot about item 7 and wondered how quickly those in real estate markets that are seeing conditions shift actually adapt to it quickly? Sellers certainly don’t and that places them at a significant disadvantage if they need to sell. Are you able to shed your confirmation bias on your changing housing market? 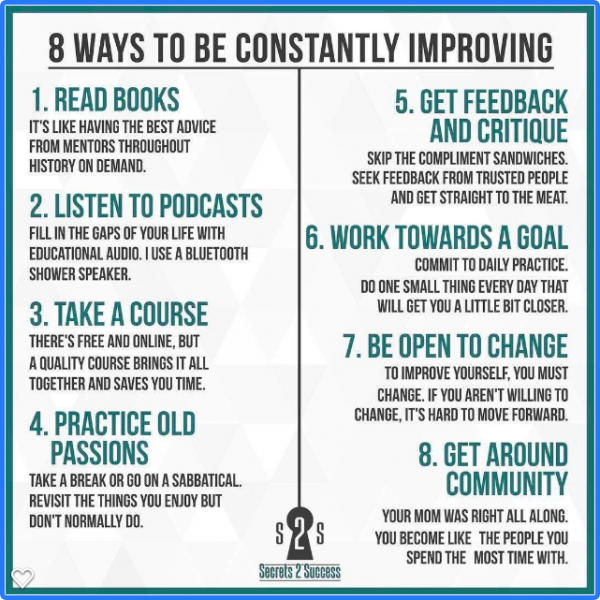 Here’s a shout out to my Columbia grad students who learned via my admiration for Edward Tufte that any chart without a credible source is a lie. It has been an engaging and fun semester thanks to all of you – good luck with the rest of your program and your graduation to a successful career.

When we moved from Manhattan to the suburbs a long time ago, I had trouble sleeping in our quiet suburban home during the first week. Missing was the steady rattle and hum (U2 reference) over everything I did, including reading a book before I went to sleep. There was something comforting about the constant noise – that the city was alive and vibrant and never sleeping. Here’s an interesting look at noise levels in the city in The Calculator column in the real estate section of the New York Times via Localize.nyc 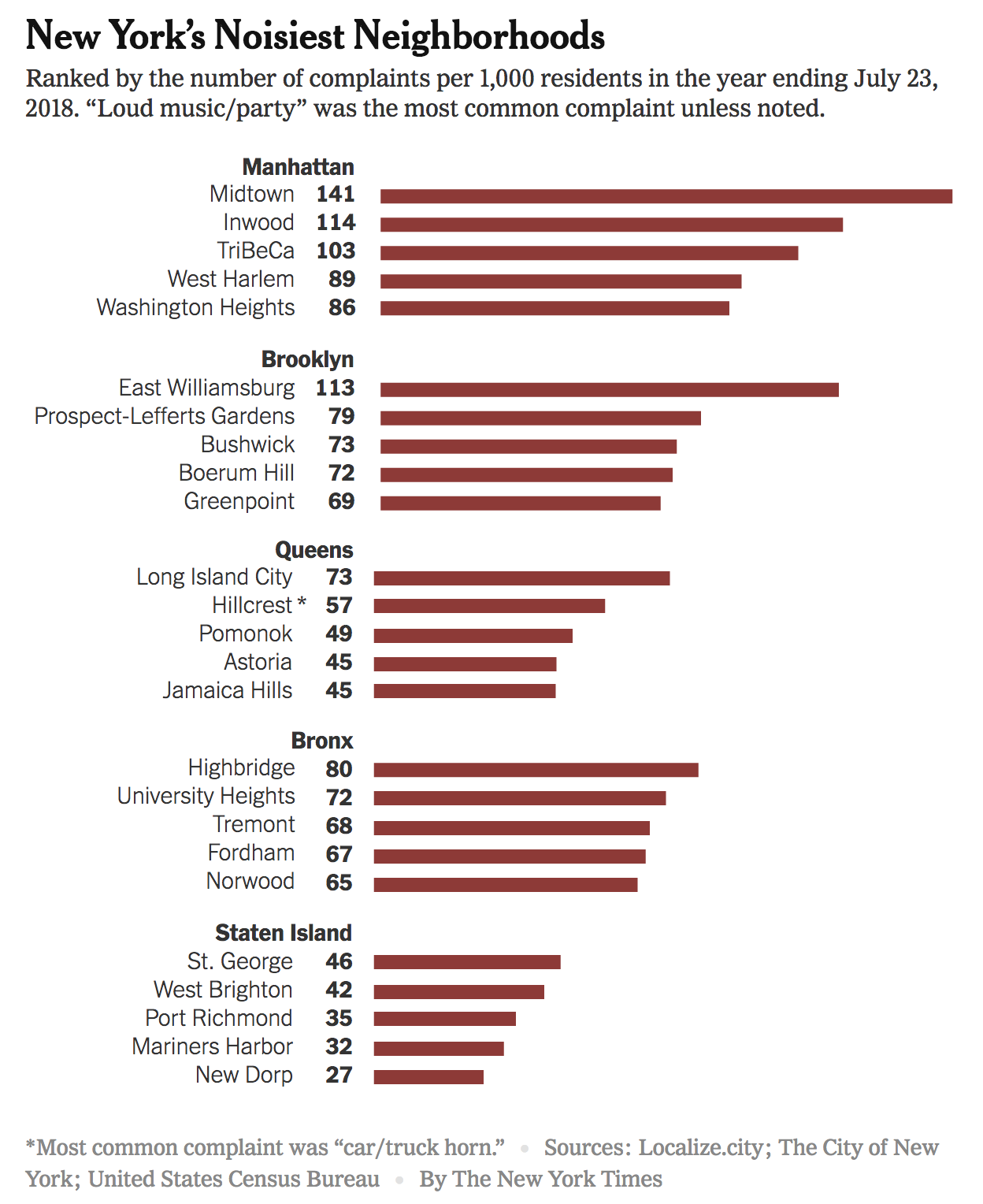 It’s About The Dirt

There is a visualization piece in Bloomberg that I can’t stop scrolling through. Here is one of many visualizations in Here’s How America Uses Its Land.

Perhaps we can take the corn syrup land allocation and use it to douse all the wildfires? About the same size and it would be a win-win. 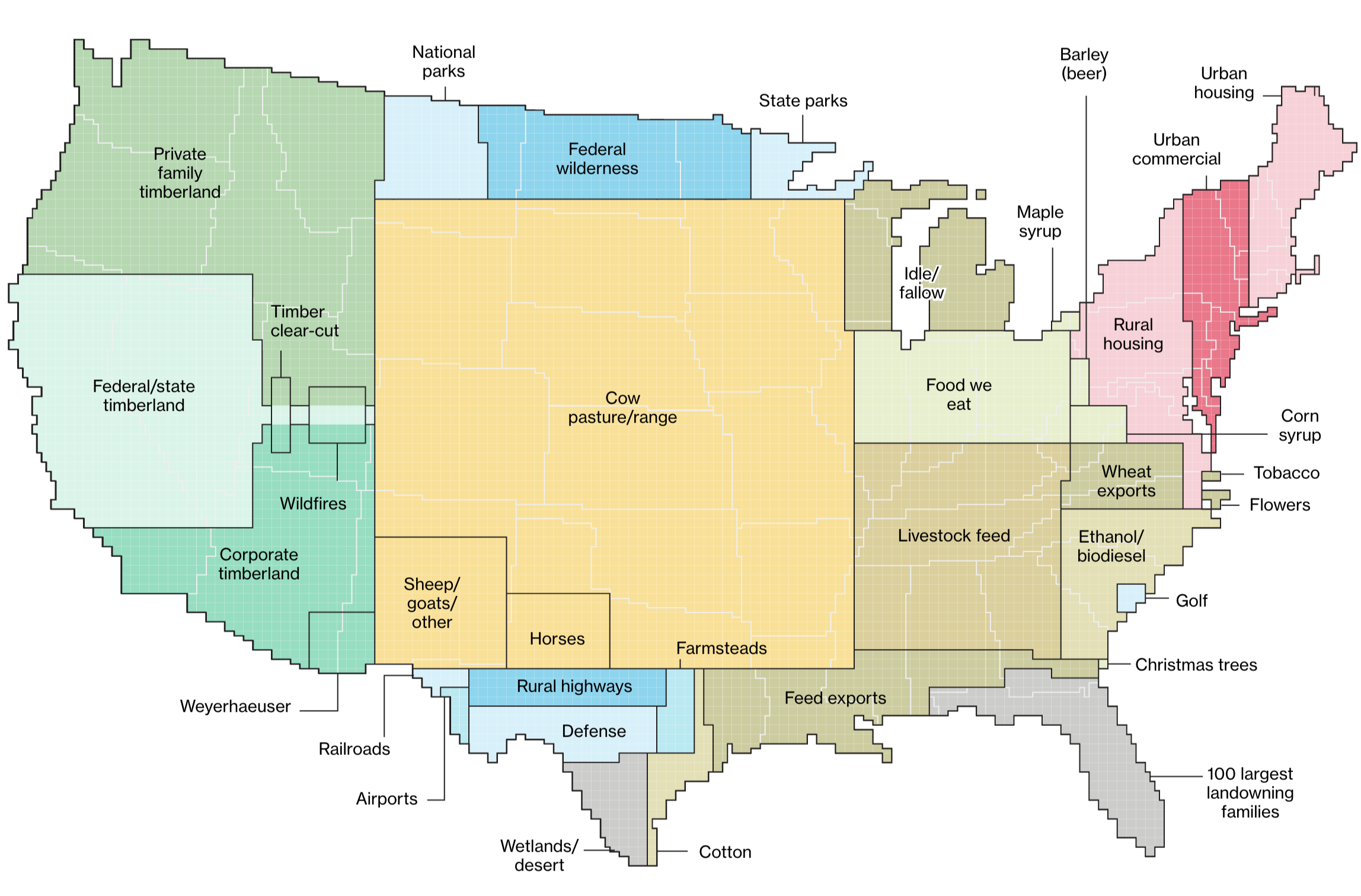 The Moxiworks Takedown of Compass Claims

Readers of these Housing Notes are aware that I’ve broken tradition and have been very critical of Compass leadership after their former president’s misrepresentations of the data they have versus static reports that I produce. As it turns out I am not alone and the Emperor wears no clothes portrayal. Moxiworks has a landing page devoted to the Compass spin and the Moxiworks CEO posted a letter that went viral providing facts. 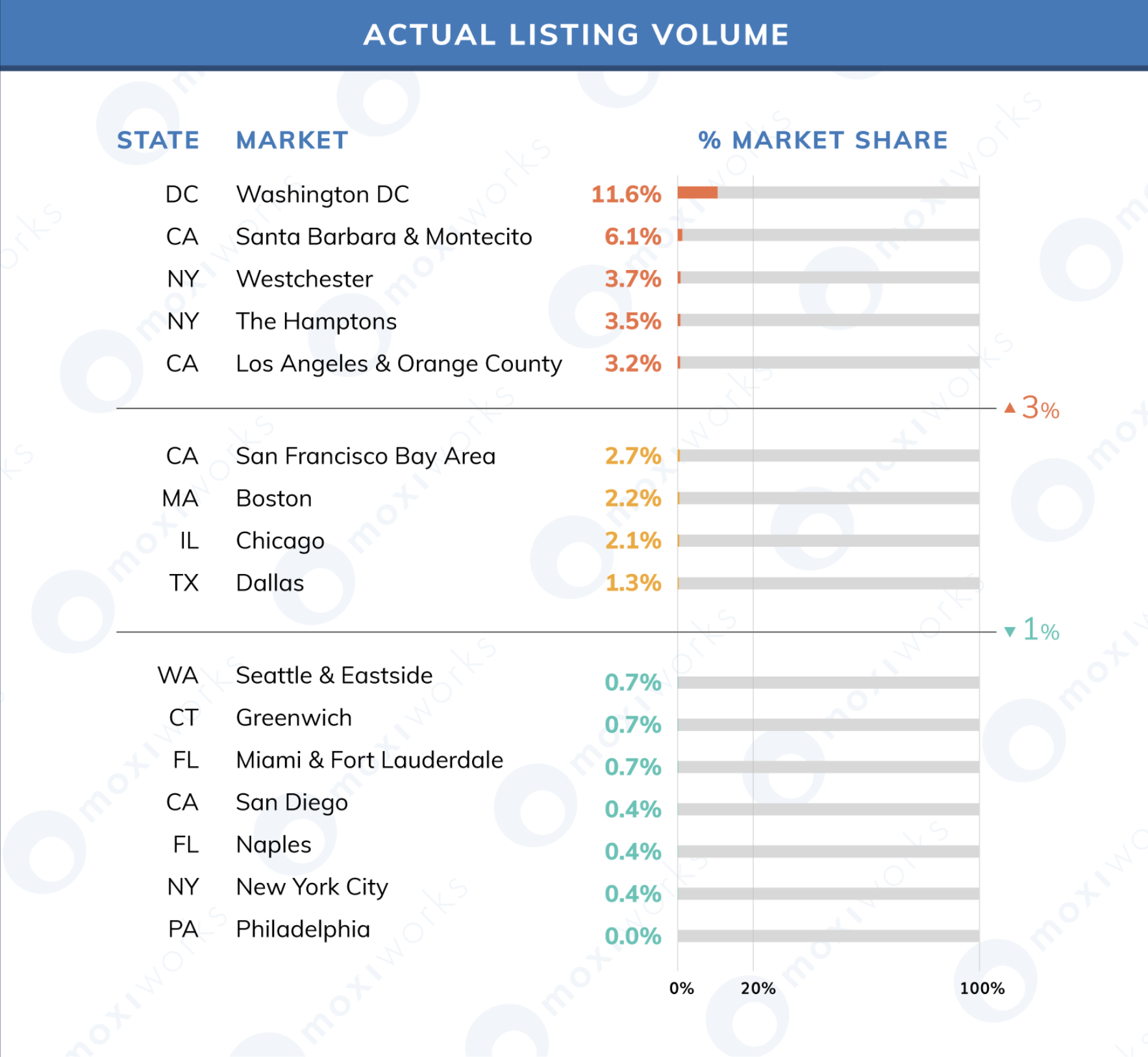 Incredibly, the company announced a licensing deal for their technology called “Powered by Compass” on July 18th and then canceled the program after 9 days when their agents complained.

The pressure to monetize their business must be rapidly growing in intensity. Isn’t it odd to monetize a technology when the company hasn’t been able to make inroads in market share using said technology – per the chart above – commensurate with the $450 million in capital they have?

Today’s announcement to launch a commercial firm makes a more sense since they can poach successful brokers that just became available after the collapse of Eastern Consolidated.

With the implementation of the new federal tax law and the punishment it provides to homeownership in high-cost housing markets, we expect to see more migration to lower-cost housing states. Somewhat dated census information provides some patterns and one can expect to see an increase in the coming few years after the uncertainty dissipates into tangible consumer behavior. Note the ranking of New York migrations to Florida and the abundance of high tax states as the origin on migration patterns: 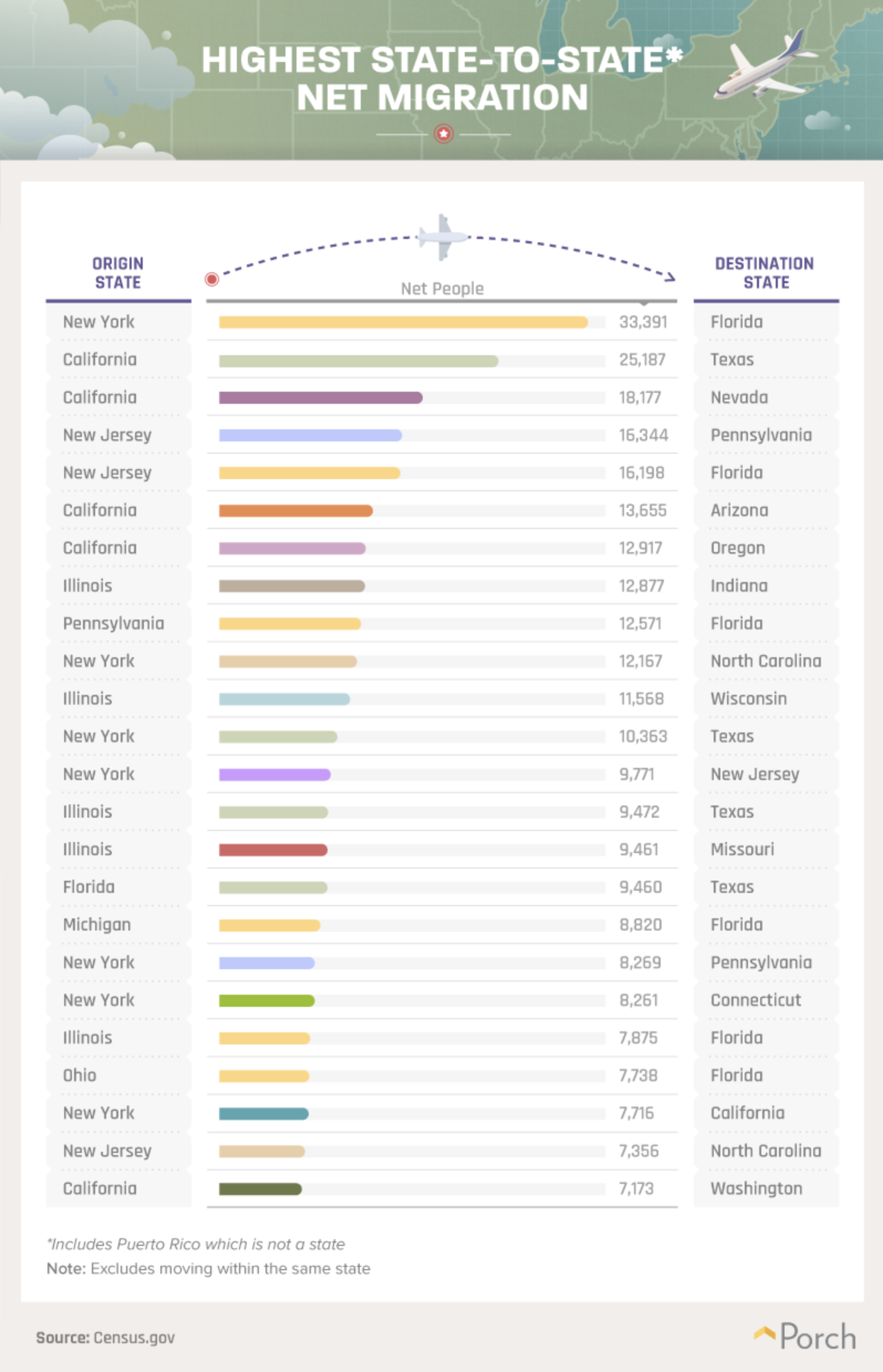 There is a lot going on in Appraiserville this week and I’m going to squeeze in what I can and then continue the narrative into next week.

I’ve long heard rumors about some clandestine legislative changes that AI National is pushing for in California (and other states like Florida, etc. through the efforts of Scott Dibiasio and others) and with a little digging, I stumbled on to something quite alarming.

Unfortunately, they have been fighting for SB-70 which guts the meaning of what appraisers actually do, all in the name of getting a “win.” The leadership of these 6 chapters are generally known for being loyal to AI National so it would be only a hop, skip and a jump that AI National and Scott Dibiasio would have been directly involved or at least aware of this action, although I can’t verify that.

What is even more alarming is that I have been told that chapter membership is likely not aware of these efforts by rogue leadership. It is not unreasonable to assume that membership in all or most of the 6 chapters would overwhelmingly vote down this effort if they were even aware of it occurring.

Here’s the background of SB-70 that is currently in play in the California legislature.

The bill was introduced by Senator Bates on January 9, 2017, and was designed to limit the application of USPAP to appraisers in the state. The bill was defeated last year but in California, a bill can roll over to the next session and with modifications could still be passed.

Right now the AI of California is working to get this bill passed no matter what it does to their membership’s livelihood. The SB-70 bill is brief but devastating. It looks like California leadership is very desperate to become royalty at AI National and fly first class with their wives around the world instead of watching out for their own membership’s interest. I hope this post becomes a discussion topic at each of these chapter’s next meetings because the news is alarming. Any feedback from membership in future meetings would be appreciated.

The following is the SB-70 bill up for modification. Here’s a more formal pdf version without the edits broken out. 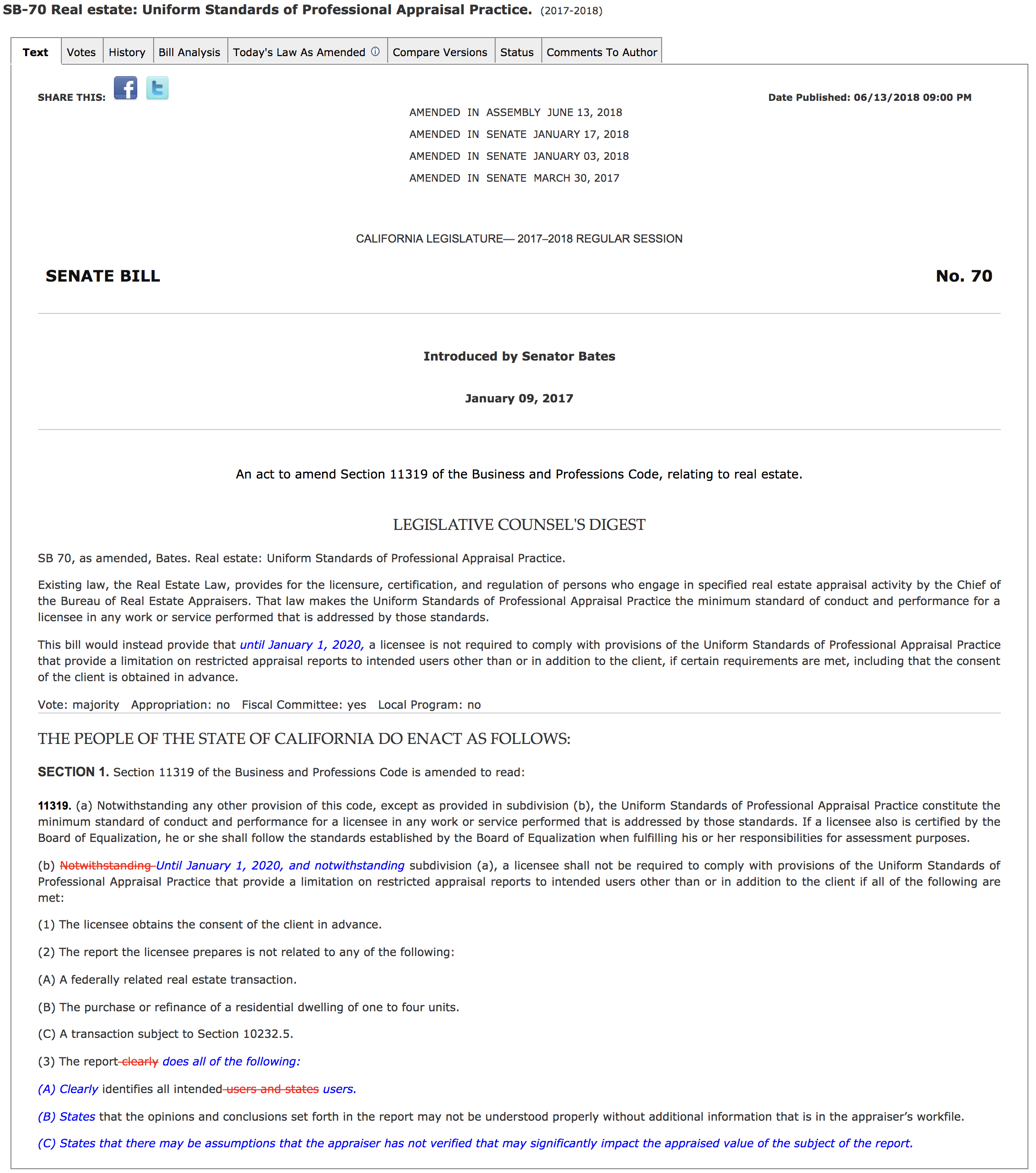 Here are some of my thoughts pertaining to specific issues:

(C) States that there may be assumptions that the appraiser has not verified that may significantly impact the appraised value of the subject of the report.

The whole purpose of USPAP is to provide credibility in reporting to protect the public trust. With the wording of this bill, any appraiser could take any point of view and not back it up with verifiable data. For example, an appraiser could take a seller’s word on potential uses of their property and the appraiser can simply restate them and not provide any support to verify the claims.

This bill allows the creation of a worthless document that demeans the value of an actual diligent appraisal.

This will open up fraud and overvaluation on a scale not yet seen before. It renders our profession equal to a fortune teller (no offense to fortune tellers). This bill shows a blatant disregard for the public trust from the real estate’s largest trade group.

But there is more:

This bill, if it becomes law on January 1, 2019, is only good until January 1, 2020!!! It is only valid for one year which clearly shows how desperately AI National needs to claim a win after years of losses in fighting for evaluations against their own membership’s wishes. They are throwing ethics aside! All bets are off now! Just get a win!

This bill destroys the validity of what an appraisal actually is because good appraisers can now perform like bad appraisers without concern. There is no accountability and no verification required if this bill is passed.

Plus, this bill changes the use of the report from the single client concept to a universal use as long as all the names are listed. How does this square up with their own code of ethics?

There is one glaring oversight by the AI lackeys in Sacramento that signed-off on this bill in secret that shows their own greediness to advance up the AI National hierarchy: There are about 10,000 credentialed appraisers in California. I don’t know how many AI designated members are in California, but I’m assuming it is substantially less than that. If this bill becomes law, can anyone imagine the explosion of fraud by people desperate to take shortcuts, ESPECIALLY AS THE MARKET STARTS TO COOL? Remember, AI leadership in California signed off on a bill that makes verification unnecessary. I’m sure a majority of AI membership in California are decent and competent appraisers. But now they have to compete with the bad eggs or those that will quickly become bad because they can say and do anything without verification. Not only AI members get to do these simple reports, but anyone with a license and a pulse does as well.

This is another example of how the Appraisal Institute’s senior leadership is working hard to undermine our profession without seemingly any comprehension that they are doing it – or that there is some other higher level plan that we are not privy to.

AI California membership – the time to speak up against your leadership is NOW.

The State of North Dakota Along With Their Banking Lobby, Applies For a Waiver

This just came in so I will expand on this post in the future, but here is what we know.

The governor has submitted a request to the Appraisal Subcommittee for an appraisal waiver but the letter seems more orientated towards raising the de minimus which just occurred. By the way, isn’t it apparent that the banking lobby is a little to cozy with the Governor’s office to actually cosign this letter? The letter also makes references to the lack of rural appraisers as a long-term problem.

It is also clear from this letter that the FDIC hates appraisers (I have seen this for most of my career) as they facilitated the eventual writing of this request.

The key problem with this request is that the number of credentialed appraisers in North Dakota is up sharply from 2007 to 2017. Here are the numbers:

Regarding the long-term narrative about a shortage of rural appraisers and removing their requirement to follow USPAP. Ask yourself these questions: would the same apply to medical licenses for doctors and dentists; passing the bar exam for lawyers; licensing and training for food service inspectors when availability is thin due to the economics of rural life? Why aren’t rural appraisers allowed to participate in supply and demand like doctors and dentists, lawyers and food service inspectors? How about the fracking companies that pay $150,000 for 6 months for an employee because labor is scarce? The problem here is this waiver will promote bad behavior no matter how well the state did in the aftermath of the housing bubble.

Interestingly the licensed category in 2007 was exempt from AQB requirements and that didn’t go well for North Dakota.

Be sure to read their letter.