While Our Housing Millennials Gently Weep

I’m fairly sure that the mere mention of Millennials, perhaps the most overused word within the housing market conversation of the past five years, will promote a heavy dose of eye rolling by my readers. I’d like to cut through the hyperbole a bit. Admittedly, my wife and I raised four and we don’t fully understand them. Through the cool Chronicle New York Times tool, we seem to be at Peak Millennials:

Within the concept of new urbanism, walkable cities, etc. Millennials aren’t fully conforming with our stereotypes in regards to the housing market. Sort of like when Prince played lead guitar for my favorite Beatles song at the 2004 Rock ‘n Roll Hall of Fame Ceremony. This was perhaps the single greatest guitar performance of his career (about the 3:30 minute mark) but it was not consistent with the body of his work and image.

There have been lots of announcements regarding the NYC housing market in recent weeks.

There was a great Bloomberg article on the glut of luxury rental apartments: Luxury Renters in New York Finally Have Leverage to Negotiate. Big rental developers now have to “work harder” too woo tenants to their buildings. It is important to understand that the problem is not about building too many units, rather the problem is building too many units skewed towards the luxury end of the market. High land prices are a key driver of the skew, but there was also a remarkable lack of awareness by lenders and developers. Many seemed to operate in a silo, unaware that nearly everyone else was building the same product. The luxury market has been soft and growing softer for at least two years so I think the following quote mischaracterizes the change in the rental market:

Perhaps the next quote is the biggest tell on the disconnect between what is being constructed and what can be afforded by Millennials and others. Yes, many want to live in the city, but at some price threshold (like, now), it just isn’t possible. But I really do appreciate his candor:

“The challenge in New York is the disparity between the luxury apartments that have been delivered and will be delivered” and the salaries paid in the city, Santee said. There are many jobs “in the $90,000 to $100,000 range, but it takes $130,000 a year in New York City to afford a one-bedroom apartment.”

One of the biggest signs that we’ve hit an affordability threshold is the heavy sales volume in the outlying New York City suburbs. The sale numbers in our Douglas Elliman market report series began to surge to decade or higher records back in third quarter of 2015, shortly after the super luxury condo activity fell sharply and about the same time heavy new development super luxury closing volume kicked in from contracts signed over the prior few years.

The outlook for Millennials to invest towards retirement seems to be much harder than was for the Baby Boomers. A new McKinsey & Co. report said:

the last 30 years have been a “golden era” of exceptional inflation-adjusted returns thanks to a confluence of factors that won’t be repeated. They include falling inflation and interest rates, swelling corporate profits and an expanding price-earnings ratio in the stock market. 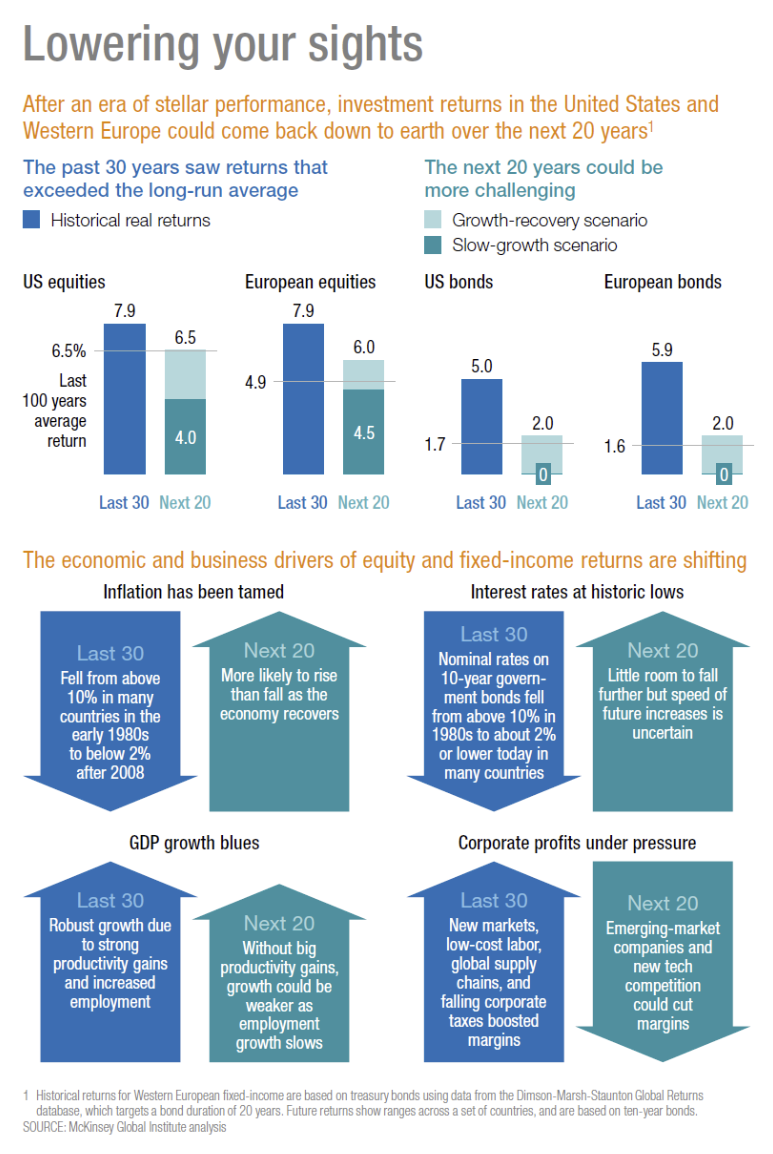 In other words, the Millennial reality does not always include a morning conversation at Starbucks like this:

Niles: Double Cappuccino, half-caf, not-fat milk, with just enough foam to be aesthetically pleasing but not so much that it leaves a mustache.
Eric: Cinnamon or chocolate on that?
Niles: Oh, they make this so complicated.

…on their walk to their job in the central business district of any city in America.

I outline my “Millennials to the suburbs” view pretty clearly in this recent article in the Fairfield County and Westchester Business Journals.

There is growing coverage of this phenomena because the promise of city living has been too successful in high cost urban markets. The creation of adequate properly priced supply (affordable) has been one of the biggest challenges to face municipal governments since the financial crisis. This applies to both for sale and for rent properties. As a result, more Millennials are buying homes in the suburbs.

Of course this migration is not quite a ubiquitous pattern. Rustbelt cities like Cleveland and Detroit are seeing Millennials flock to their urban centers, much like the bohemian movement in New York City in the 1960s in neighborhoods like Soho and Greenwich Village, now two of the most expensive neighborhoods in Manhattan.

Wealthy suburban markets in Connecticut are responding by getting creative in the affordable housing space.

The law responsible for all this, statute 8-30g, is rather simple and straightforward. Every Connecticut community must ensure that 10 percent of its domiciles are affordable to a family earning, in most cases, about $64,000 a year or less. If not, developers effectively have the right to ignore zoning restrictions and build whatever housing they want, so long as 30 percent of those units are set aside as affordable.

Food labeling gimmicks a la “fat free”, “low sodium”, “low carb” and “micro” have long been a tradition. The newest is the use of “Artisan” or “Artisanal”, a label that consumers don’t fully understand. McDonalds now has an artisan grilled chicken sandwich yet the word “artisanal” invokes images of anything but a big company.

I am surprised artisan hasn’t seen more use in the real estate new development naming game. There is one I know of, but the name didn’t seem to help.

Think of your city or one closest to you and try to imagine what it would be like if there was a garbage strike like the one New York City had in 1968. As bad as things can get, I think it is inconceivable to many that things could get that bad in our lifetimes. When we consider why some housing markets are better than others, not enough credit is given to how local governments keep services running. New York has “cleaned up its act” (sorry) significantly over the subsequent 50 years. This event was one of the reasons the outlying suburbs of NYC thrived at the city’s expense until the early 1990s when change began to occur. 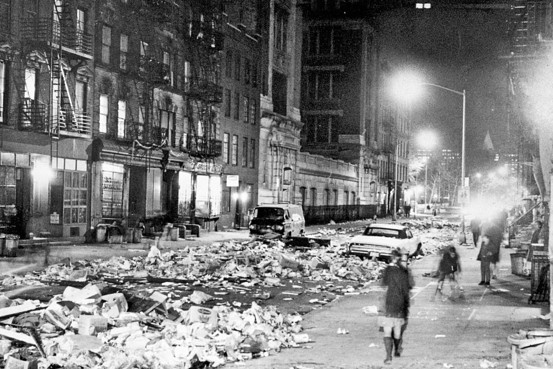 I must admit I was quite jealous when I saw this DNAinfo study on where people sit within each subway car and how this changes depending on the time of day and length of the ride. It’s a terrific visualization tool. I have long wanted to do this for my 53 minute Metro North commute into the city from Connecticut (I know where the best air conditioned seat locations are on the new trains).

Revisiting The Hamptons Market As It Moves Sideways

I spoke with Betty Liu (in NYC) and Mark Barton (in London) on the Hamptons housing market from the results of our recently published 1Q16 Hamptons market report with Douglas Elliman and the Oshrat Carmiel article that covered the market and our report results. It was the number one emailed article on Bloomberg worldwide, which is always exciting.

During the TV interview we bantered about the linkage of the market to Wall Street, how pricing was moving sideways and how sales returned to long term averages. 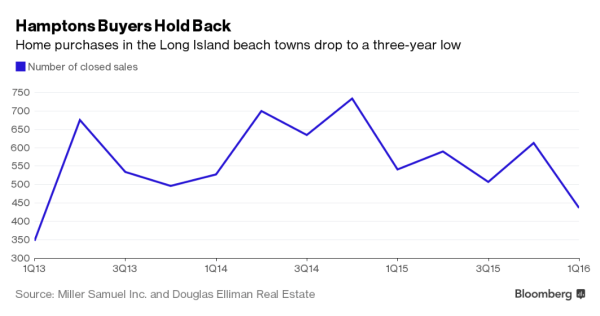 Here’s a my chart with longer view on sales and price levels. 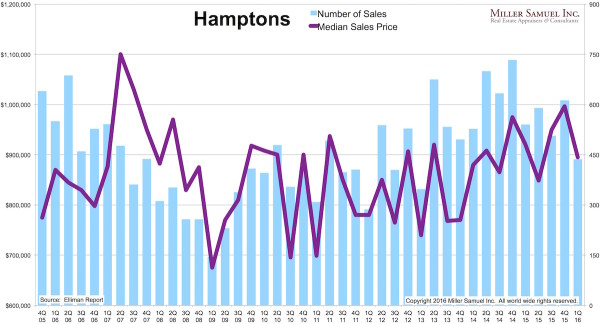 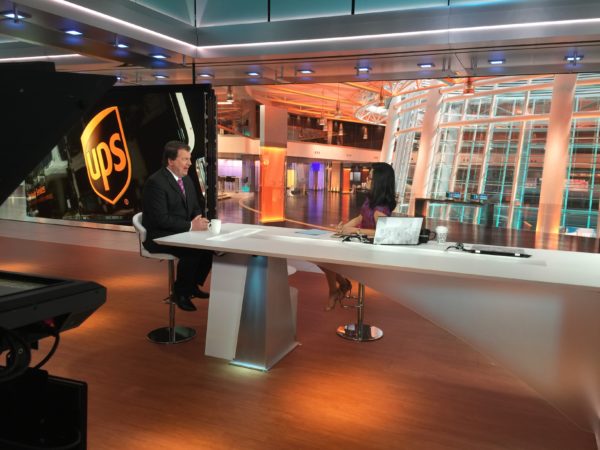 Check out all the images of homes they projected during the segment tagged with our appraisal firm’s name. We provided those photos taken by our executive vice president and senior appraiser Mike Grassi who is one of the best appraisers in the Hamptons market. Bloomberg even used the “Ken Burns Effect” on the images!

As much as I follow and love the Hamptons, my real beach love is reserved for Rehoboth Beach, DE where I lived for a good part of my childhood. Here’s a live web cam of the boardwalk and beach from the hotel we usually stay at.

Markets Change, So Always Have A Plan “B”

Another bombshell housing announcement came this week. No, not the bankruptcy filing of the mega hit show “American Idol.” The developer for the iconic former AT&T building opted to forgo the $1.8 billion super luxury condo conversion sell out and sell to a firm that would keep it as a “Class A” office building. They bought it for $1.1 billion in 2013 at the tail end of the frenzy and three years later, flipped it for over $1.4 billion. I have long said that it felt like they bought at the tail end of the window of the super lux condo development opportunity or just missed it.

After deducting costs, they probably made a few hundred million. That’s good work if you can get it. Still it is widely seen as the end of a high flying era, the symbol of the end of the super luxury condo-name-any-price frenzy. In reality, market conditions are always changing. I think this is one of the biggest misunderstandings of the development process. Developers are in business to maximize their return from the insane risks they take on. They aren’t predetermined to build only super luxury product. Instead they make money where money can be made. This is one of the only development cycles in the modern era I can think of where luxury housing was the primary, if not the only focus. High land prices, low interest rates and alternative commercial financing were the drivers of this pattern in the current cycle worldwide.

In Miami, a new development market that is already cooling, a Russian billionaire is doubling down and thinks Chinese investors will be buyers in Miami. This is clearly contrarian since the Chinese have not been active buyers/investors of South Florida condominiums. However I’m told by a number of market participants that this change in sentiment is already beginning to occur.

In one of my “go to” weekly podcasts, Voice of Appraisal with Phil Crawford, he speaks with William K. Black about appraisal fraud and the AMC. I find it incredible that regulators and financial institutions don’t understand how bad the mess is – that has been created since the financial crisis through reforms. A few years ago I wrote about William Black’s unbelievable TED talk “How to Rob a Bank (from the inside that is).”

Check out Phil’s interview and please drop in regularly to listen to his Voice of Appraisal podcast.

Since the theme of this post has largely been about going from one extreme to another, here is a fascinating short on the topic of balance, appropriately named BALANCE.

The video opens with a quote from Socrates:

Beware the barrenness of a busy life.

Be sure to expand it to full screen for the maximum effect.

BALANCE from Tim Sessler on Vimeo.

If you need balance in your life (particularly on Friday afternoons), sign up for my Housing Note here. And be sure to share with a Millennial. They’ll feel wealthy, you’ll feel centered and I’ll enjoy that cappuccino with enough foam to be aesthetically pleasing.