I just finished my four-week quarterly gauntlet of 23 market reports [1] covering 32 housing markets across the U.S. for Douglas Elliman Real Estate. I’ve been writing this expanding series for 23 years, and after the end of it, I feel like death warmed over. I’m exhausted and have a hacking cough coming on, but fully satisfied and a lot more informed. In fact next week I am traveling to D.C., hired as an expert witness in a litigation matter, to talk about market conditions in NYC. My death-warmed-over feeling will soon be replaced with numbers. I never grow tired of seeing the moving parts of so many different housing markets and how they compare and contrast.

That’s why yesterday’s New York Times article – with the best title of the week – really illustrated my death and property value theme: Why the Brooklyn-Queens Border Is Full of Dead People [2]

Over the next few decades, rising property values led most of Manhattan’s graveyards to evict their residents. Hundreds of thousands of bodies were exhumed and taken by cart and boat to new final resting places, sometimes in the dead of night, to limit the number of onlookers.

but I sort of digress…

This week’s coverage of the remaining markets in the NYC metro area, specifically the Hamptons market was well read by Wall Streeters. The Bloomberg coverage [3] on our Hamptons report [4] was the 5th most read on the Bloomberg terminals worldwide.

Here are the hard top line results for the Hamptons in 1Q17.

And of course, it came with a chart, and charts simply cheat death, or specifically, make me feel alive. 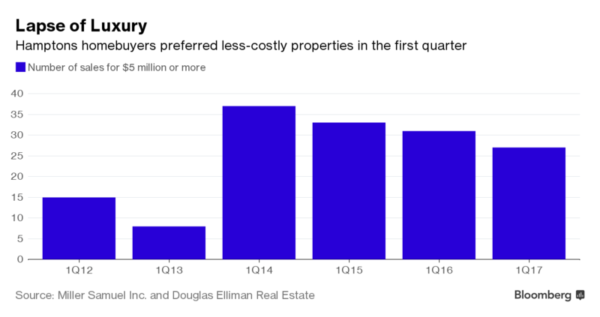 But let’s not cast aside Long Island and North Fork.

While North Fork was noticeably slower but with an unusual burst of very high-end sales.

The report for Aspen/Snowmass [5] was also published this week. There was clearly an uptick in sales but also a little more life at the top of the market. 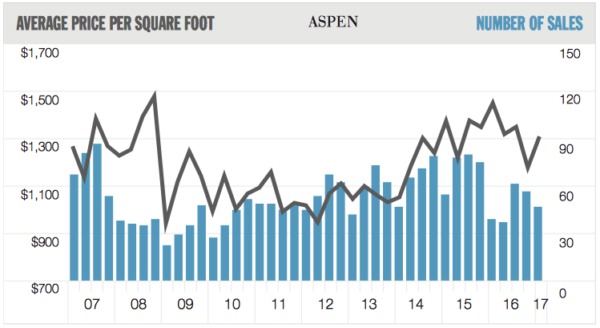 We released our 1Q17 Los Angeles [6] report as well as submarket reports for Venice/Mar Vista [7] and Malibu/Malibu Beach [8]. LA remains one of the tighter markets we cover after Brooklyn.

This quarter we tried something new in our analytics for LA. We sussed out pocket listings [9]. As I explained in my blog post:

We matched public record closings with properties listed on the MLS. Those sales missing from the MLS were either FSBOs or “pocket listings.” A FSBO or “for sale by owner” is when a homeowner lists a home themselves without a broker. A pocket listing is a home that a broker knows that the seller is interested in selling but only at the right price and doesn’t want their home viewed by the outside world in the MLS.

Notice how the occurrence of these listings is higher at the top of the market? Roughly 1/3 of the high end (above $5M) in LA are not listed on the MLS. Entrenched brokers with a lot of local experience are the ones who foster relationships with these high-end owners. In some ways I think of it a little like the “make me move [10]” price feature that Zillow has. 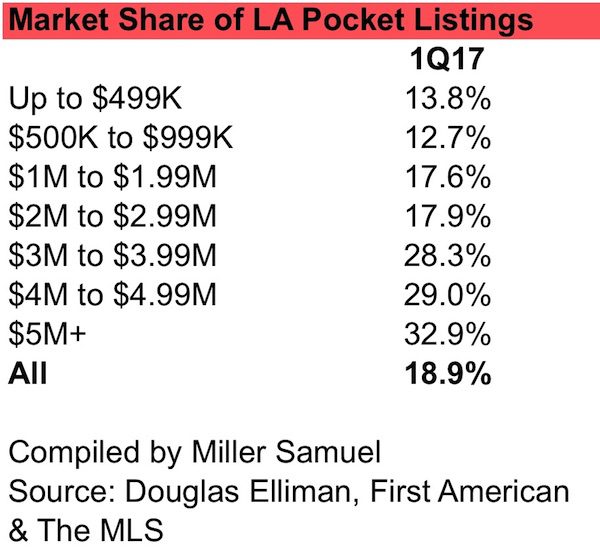 The Lack of Supply is Hurting Sales 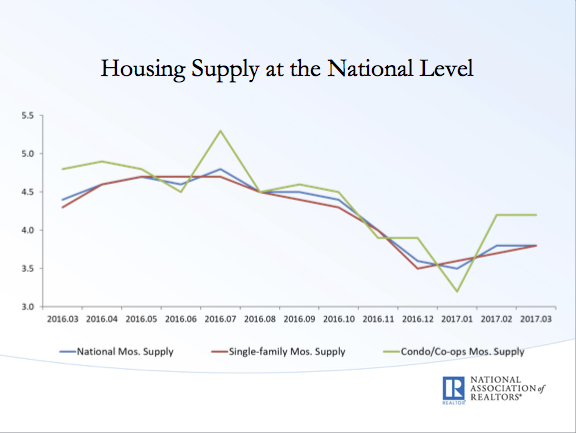 Across the country there would be more home sales if there was more inventory [11] with the possible exception of the high-end market. We observed this phenomenon in markets like Long Island [12], New York and Los Angeles [6], California where the the trend in pending sales was negative because the trend in inventory was negative as well. There are many reasons for this:

There is a great weekly column in The Real Deal magazine called The Long View by Konrad Putzier. This week he delved into concessions with: The Long View: What’s the point of incentives in the resi market? [13]

Sales Incentives
Despite their popularity, I never understood the use of incentives to bring in more buyers. Get a Ferrari if you buy a condo in our building. Buyers are in the market for a condo, not a car. They are more interested in applying the cost of the item from the purchase price. I see it as a marketing tool when a buyer is on the fence, rather than to draw in new buyers. The developer is doing everything they can to protect the sales price so when it closes; it doesn’t cannibalize other sales with a lower priced sale in the public domain. Sure there may be that occasional person that goes for the car, but that’s the exception. Then why does this keep happening? Because when the pressure rises as sales fall, the idea of just doing something flashy, anything, to get the project selling again. I see it as more of the grieving process a developer has to go through to align with market value.

Landlord Incentives
With landlord concessions, I was more appreciative of the idea that when a landlord offers very large concessions, they stop working for both the landlord and the tenant. The tenant will begin to assume that the rent will spike at the end of the lease and they will have to move out. The landlord will realize that they will see a falling rate of lease renewals.

The Death of Homeownership Was Shortlived

Remember all those talking heads and pundits describing the U.S. as morphing into a nation of renters? You should. It was prolific since the housing bubble burst. Well household formation [14] by owners is outpacing renters for the first time since 2006. 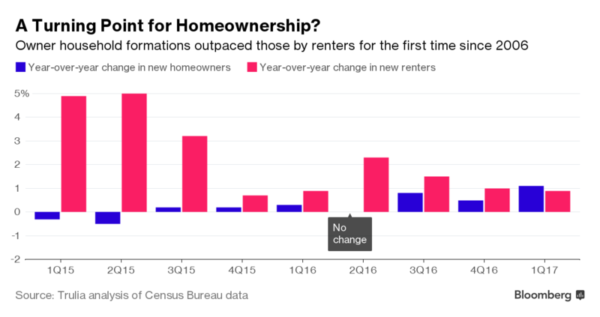 What’s in a neighborhood name?

There was an interesting piece on Manhattan neighborhood names in Crains [15]. Reporter Joe Anuta asks the question (and this is the longest title/subtitle in the history of NYC):

Naming rights: Who decides what a neighborhood is called and where it starts and ends?An ongoing brouhaha over what to call a section of Harlem is the latest battle in a long-running war over neighborhood naming rights [16]

This debate appears every 3-5 years it seems. Detracters view it as an insult to existing residents. I can’t get my arm’s around why SoHa (Southern Harlem) “deliberately diminishes the area’s past.” The implication I think is that gentrification is bad and names with acronyms are derived from it. Neighborhood names have changed and evolved for hundreds of years. Neighborhood boundaries expand and contract. Neighborhoods are always in a state of change, whether it is the retail, the housing mix, jobs, etc. It is not a legal entity like a country, state, county, borough or city. Right?

This is an NYC tradition – speaking of traditions…

Mapping Beerdom in the Lower East Side of Manhattan

Apparently, there was a lot of beer consumed in the 19th century. No Samuel Adams Cherry Wheat back then either. 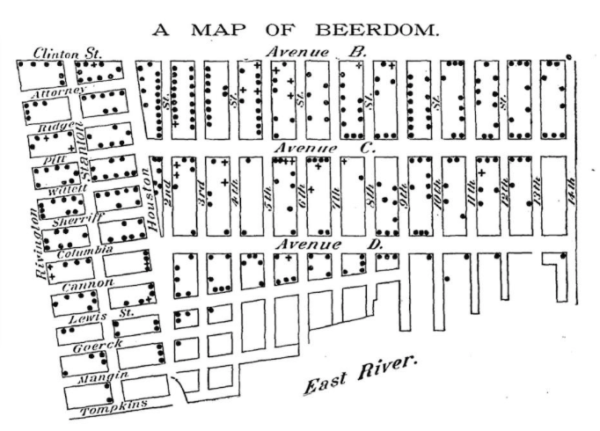 There is a great reprinted article in American Banker [18] from the 2016 M&T Bank annual report that lays out why low-interest rates are so bad for the middle class. I’ve been decrying low rates since at least 2012. Now with the new economic data that GDP only grew at a 0.7% rate [19], it seems like low rates will be around for a while, no matter what the FOMC decides.

Here are a couple of excerpts.

This extended period of ultralow interest rates no longer benefits the average U.S. household. The majority of the wealth of the typical M&T customer, like that of most Americans, takes the form of equity in their homes, retirement savings, bank deposits and, to a lesser extent, stock market investments. Low rates initially provided middle-class households with relief both by lowering monthly mortgage payments and supporting a recovery in home values. However, the investments of these same families have suffered. Indeed, many middle-class families, frightened by the precipitous market decline of 2008, responded by pulling out of the market. Only half of these households today hold any stocks or mutual fund shares; before the crisis, fully 72% did so.

Crucially, without stocks and the growth in value and dividends they can provide, most households must rely on interest from their investments to save for college, a down payment on a home or to prepare for and navigate retirement. It is here that they have felt the sting of near-zero interest rates. Interest income for households has declined sharply in the aggregate. In 2014, it had, compared with 2005, fallen by some $64 billion. This disproportionately affected households with incomes of less than $100,000; their interest income declined by $44 billion, or 68% of the total decrease for all households.

The appraisal theme this week is “conflict.” Our industry has been beaten down for years by AMCs and our big trade group. This week we talk about a bombshell lawsuit that all of us will be talking about for a while.

Coester Chronicles Continued
Do you like to read John Grisham books? I have a story that is much better. It is about a residential fee appraiser in Georgia who filed suit against what the appraisal industry sees as the most notorious AMCs out there and its owner. The appraiser provides compelling tangible evidence with his claim that his email was hacked by the AMC.

The lawsuit was filed in United States District of Court for the District of Maryland. Here is the complaint [20] that was filed.

The complaint reads better than “The Firm. [21]” I also bought and downloaded [22] all the supplemental files and read through the case. I haven’t included them here because I’m not sure if I can distribute, but the filing itself is all you need to get the gist. It’s crazy, and a tad scary.

This morning Phil Crawford over at Voice of Appraisal [23] gives a good overview of the lawsuit.

One of the legal concepts most interesting to me in the complaint was trespassing, especially when an email is sitting on a Google server somewhere in the ether.

Defendants knowingly and intentionally committed the tort of trespass to chattel when they accessed without authorization, and therefore intermeddled with, Plaintiff’s Gmail accounts and e-mail communications.

If Coester loses, I would imagine there would be a massive settlement. After all their legal troubles, the fact they are still around – shows how much money has been taken from the hides of appraisers.

UPDATE (later in the same day): Something I forgot to mention when I originally posted this. If someone hacks your email, isn’t that some sort of federal crime?

If you need something rock solid in your life (particularly on Friday afternoons) and someone forwarded this to you, or you think you already subscribed, sign up here for these weekly Housing Notes [24]. And be sure to share with a friend or colleague if you enjoy them. They’ll become your grave digger, you’ll find values in cemeteries, and I’ll finally ignore condescending emails.