Quarantine time has given us and our pets the opportunity to master some new skills. And not because I’m some sort of quoted source on pet-friendly real estate or track data on the topic of pets in housing.

Manhattan Listing Inventory Is Listing In The Spring

If you want to see empirical evidence that the market is not performing as we would expect in the spring, this is it. Listing inventory rises at the beginning of each year in anticipation of additional demand in the spring. 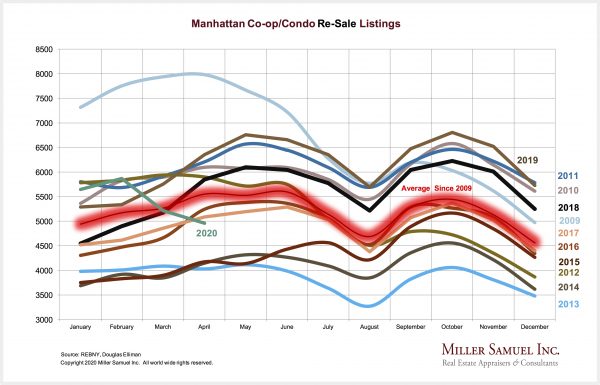 I’ve been writing the expanding Elliman Report Series since 1994 and this week Douglas Elliman published our research for The Hamptons, The North Fork, and Long Island. 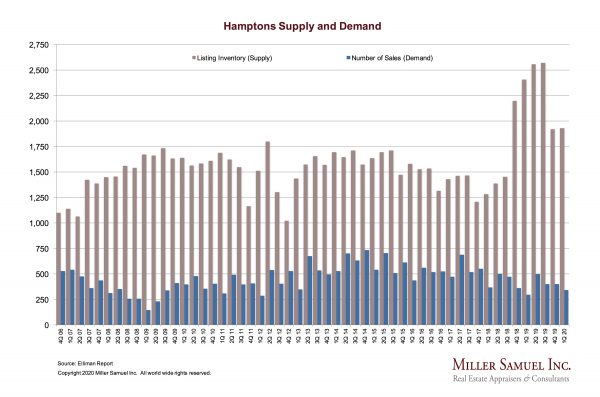 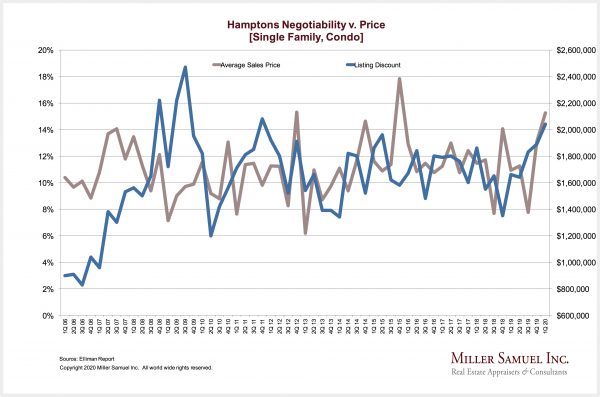 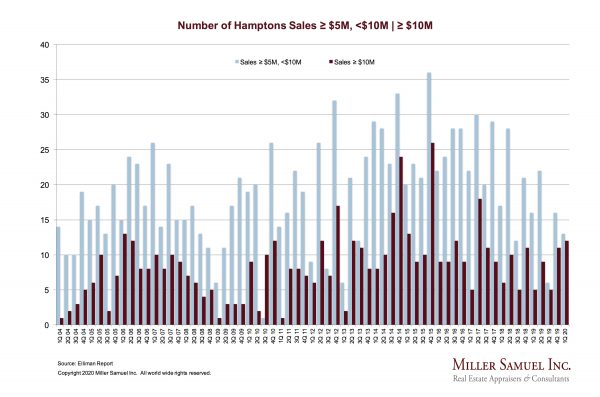 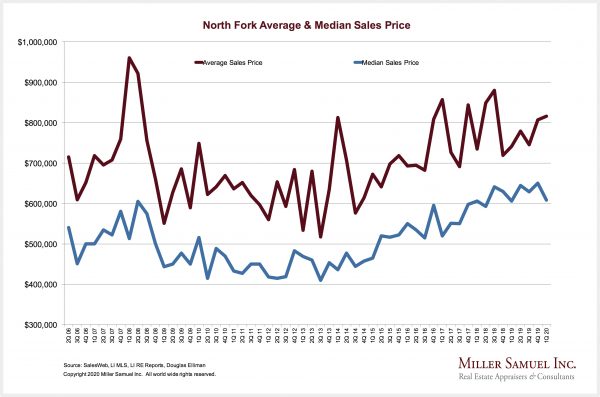 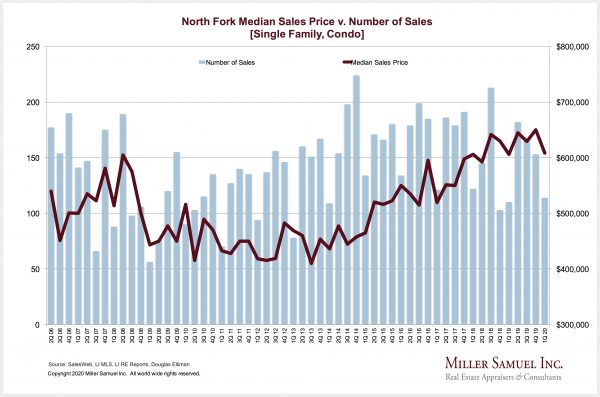 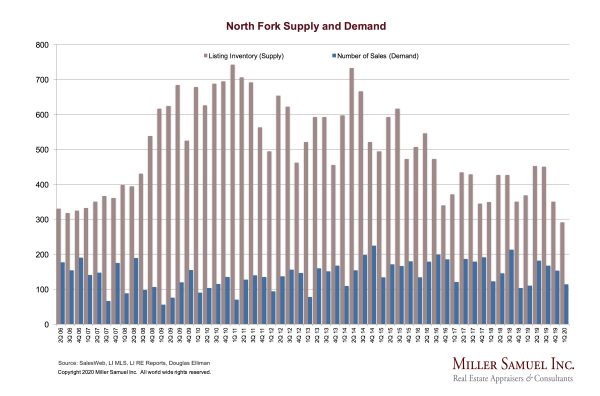 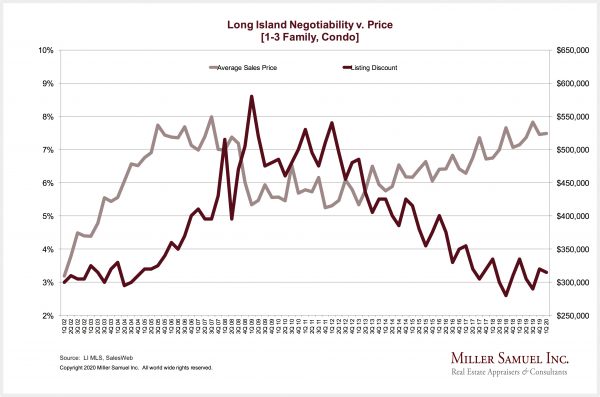 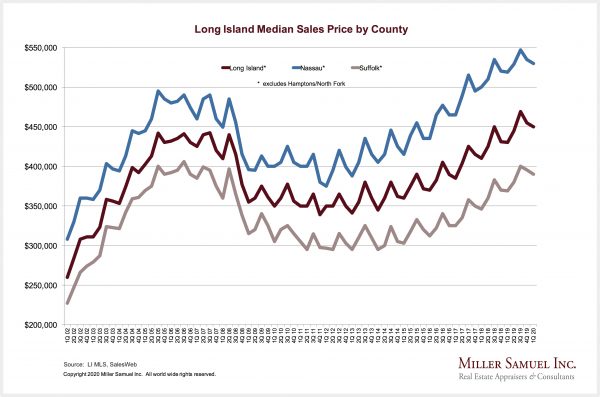 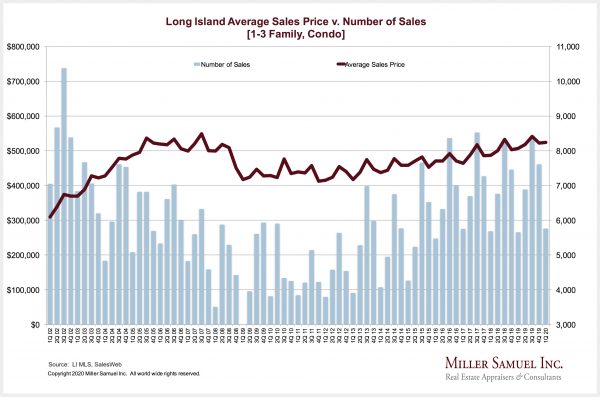 Here’s a clip from Bloomberg Radio on the state of the housing market:

Overemphasizing Population Density As The Cause Of The Covid-19 Crisis

As cities will undoubtedly face renewed housing competition from their suburban counterparts when we get to the other side of the crisis, there seems to be a distorted assumption that the high rate of infection in cities is the exclusive purview of high population density (which is the secret sauce that makes a city so great).

Yet that’s not quite fair and will likely be rethought as we review this crisis in the rearview mirror down the road. As the great read in Vice describes:

If past actions predict future results, cities are in trouble. In terms of containing the virus to begin with, New York City was days late to shutting down schools and issuing stay-at-home orders compared to other American cities with better outcomes, days that researchers are increasingly identifying as critical in the virus’s spread. And, thanks in large part to profound failures on the federal level, Americans simply cannot access accurate coronavirus testing, dooming us to languid and troublesome returns to normalcy.

As Henry Grabar in his Slate piece said:

A cursory look at a map shows that New York City’s coronavirus cases aren’t correlated with neighborhood density at all. Staten Island, the city’s least crowded borough, has the highest positive test rate of the five boroughs. Manhattan, the city’s densest borough, has its lowest. Nor are deaths correlated with public transit use. The epidemic began in the city’s northern suburbs. The city’s per capita fatalities are identical to those in neighboring Nassau County, home of Levittown, a typical suburban county with a household income twice that of New York City. True, New York City apartments are crowded. The share of housing units with more than one occupant per room is almost 10 percent. But that number is 13 percent in the city of Los Angeles. As a metro area, New York isn’t even in the top 15 U.S. cities for overcrowding. It’s not even the American city with the most apartments per capita (Miami) or immigrants (also Miami), to take two other characteristics that critics say might be associated with coronavirus infections. 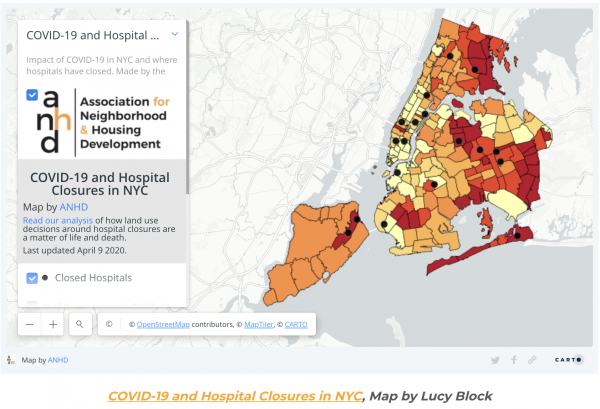 More than a decade ago when the housing/credit bubble burst the focus on exiting the financial crisis was to bail out the banking industry. They were essentially insolvent and by not forcing them to “mark to market” their asset values to their new lows which would force them to declare insolvency, they survived. Banks had become reckless and in the eyes of the government and needed to be bailed out or the global economy would collapse and caveman days would return.

My friend and zen-goddess of the housing data vertical Ivy Zelman of Zelman & Associates paraphrased a quote by Howard Marks: “Capitalism without loss is like being Catholic without hell.”


“The firewood had been stacked,” Oaktree Capital Management said in a recent presentation to investors. And the coronavirus pandemic was the igniter.⁠ ⁠ Companies had been levering up and it is time to take advantage of the situation, Oaktree said in its presentation, which was viewed by @Bloomberg. Oaktree, which is majority-owned by Brookfield Asset Management, is looking to raise $15 billion to start a distressed-debt fund, the biggest of its kind.⁠ ⁠ Follow the link in bio to subscribe and see which other companies are doing the same.

However, my thinking here is that the federal government is expecting healthy banks to take a bullet for the economy and the banks show little appetite for suicide.

Going into this downturn, banks were in relatively good shape and the government is leaning on them to facilitate saving small businesses and independent contractors. But the banks are not being reckless as I would assume the federal government wanted them to be in order to save the economy. Yes, the $350 billion dollar stimulus showed how the payouts were skewed to larger businesses and existing customers of the banks, but that’s how the legislation was written. There is another batch of money for SBA that was just put into law that hopefully will fix and redirect emphasis towards small business.

But the banks are doing what they didn’t do in the prior crisis, focus on risk management.

That’s because the banks are concerned about self-preservation and likely do not trust the word of the federal government in the execution of new rules to enable trillions of funds to be distributed to individuals and small businesses. Here’s a great summary by the Urban Institute.

In other words, the credit box is shrinking.

These institutions are demonstrating that they are fully aware of the risk and won’t be the backstop on the crisis – the federal government will be forced to take the lead. So much for hell.

Here’s a clear, logical depiction of the current state of high-end real estate from my friend and top broker Noble Black.

About 6 months ago, my Facebook account switched to require double authentication somehow but didn’t text by code for access. I tried for months to work with Facebook to regain access and they were remarkably unresponsive so I gave up and feel better about life in general as a result.

When my friend Josh Rubin reached out, one of the top-producers at Douglas Elliman Real Estate, he said we can do his Facebook Live event as a Zoom call into Facebook. I’m not sure how all of this works, but at least both of us confirmed we were at wearing pants for the discussion. 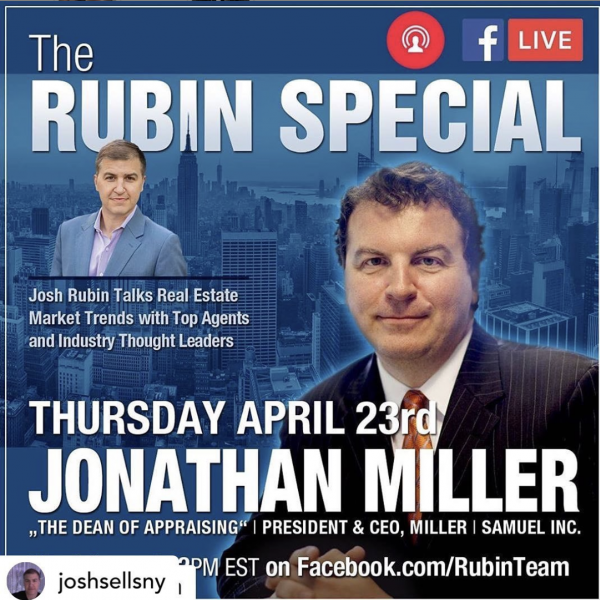 The story on these market reports tell us that the first 2.5 months were relatively robust and the last two weeks of the quarter were not. 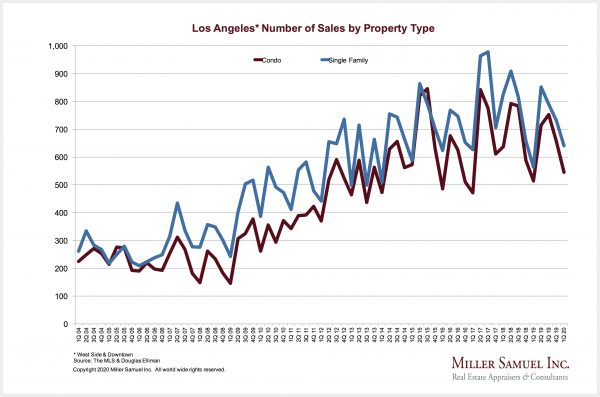 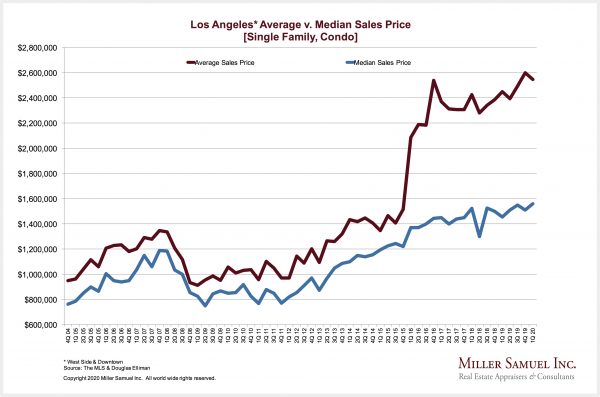 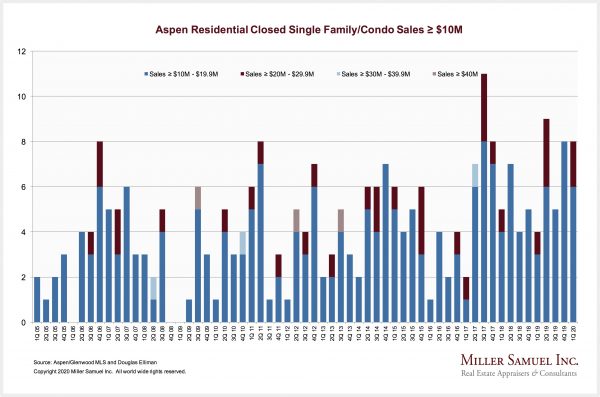 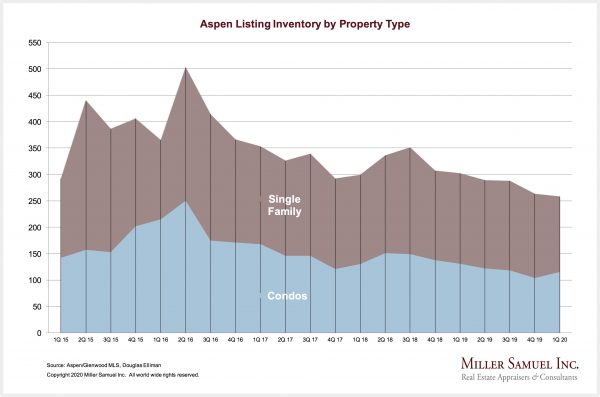 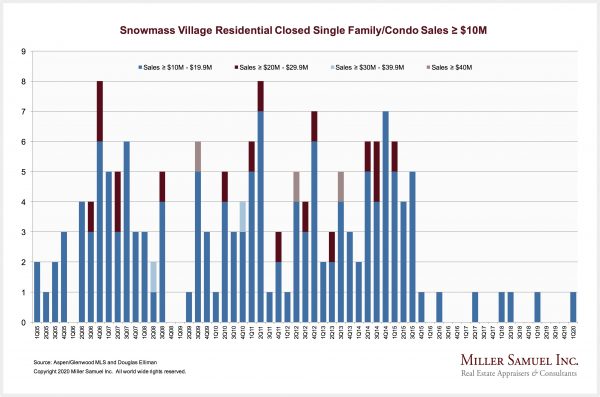 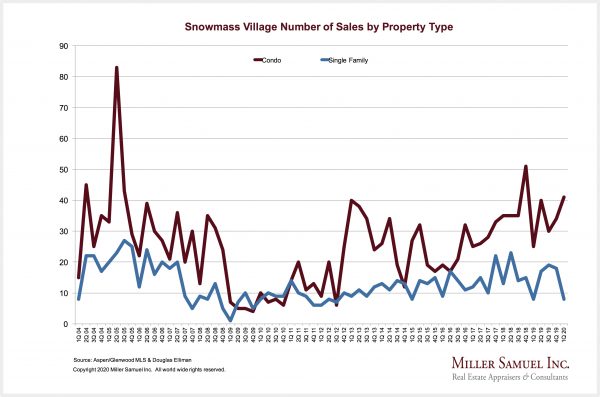 This week, his charts are all about Fed Beige Book terminology: 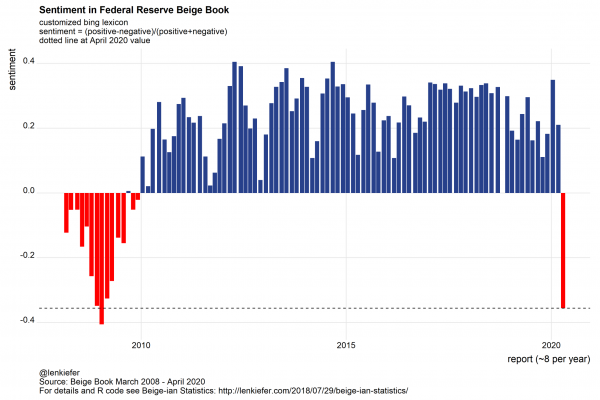 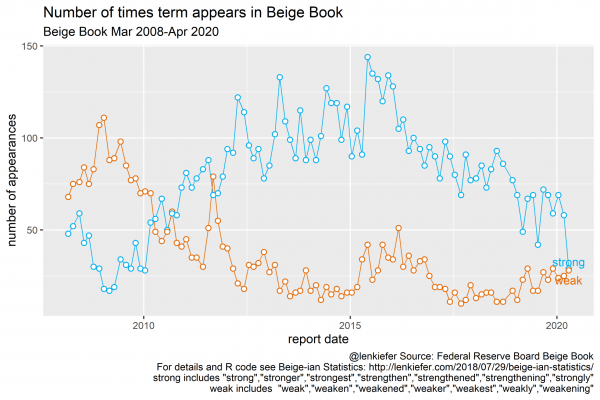 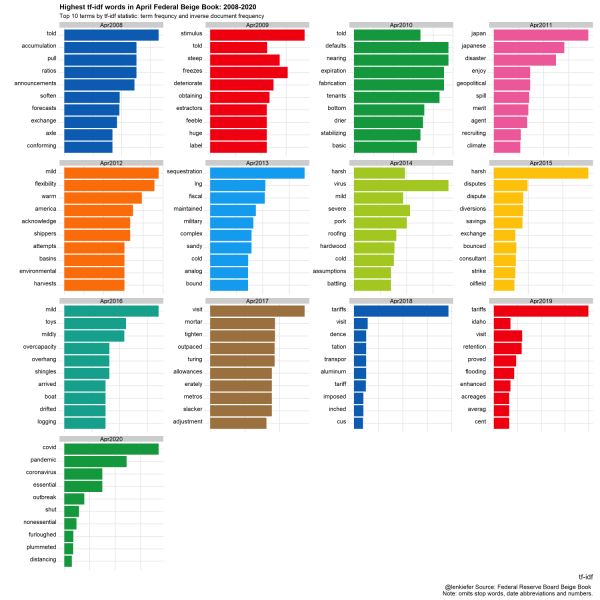 COVID-19 Line of Demarcation Is From Hanks To Banks

In order to understand what is happening now, we need to ween ourselves off of what happened before this crisis and focus on finding data exclusive to the post-COVID-19 era. In Manhattan, that data set is not yet apparent because we are in nearly a total market shut down but it is evident elsewhere to a limited degree. From my perspective, the demarcation line for the onset of the crisis is where market participants would have to be living in a cave on a desert island to be unaware of the sharp pivot in market sentiment.

For me, that date is March 15th which was the date of the Federal Reserve rate cut to zero and the second cut in less than two weeks.

My friend and California appraiser Ryan Lundquist proclaimed March 11th which was the date Tom Hanks announced he and his wife had contracted COVID-19.

I was talking about this difference in these dates with a friend, Chicagoan, and RAC appraiser Michael Hobbs who brilliantly dubbed this four-day window from March 11 to March 15 as: “From Hanks To Banks.”

Whatever your specific local demarcation line is, use it to keep the data for these two market periods separate.

I’m hopeful that society is able to get back into other’s personal spaces when we get to the other side of the Coronavirus crisis. There is a lot of inspiration coming from our first responders, and workers on the front line that have no choice. This cover says it all. 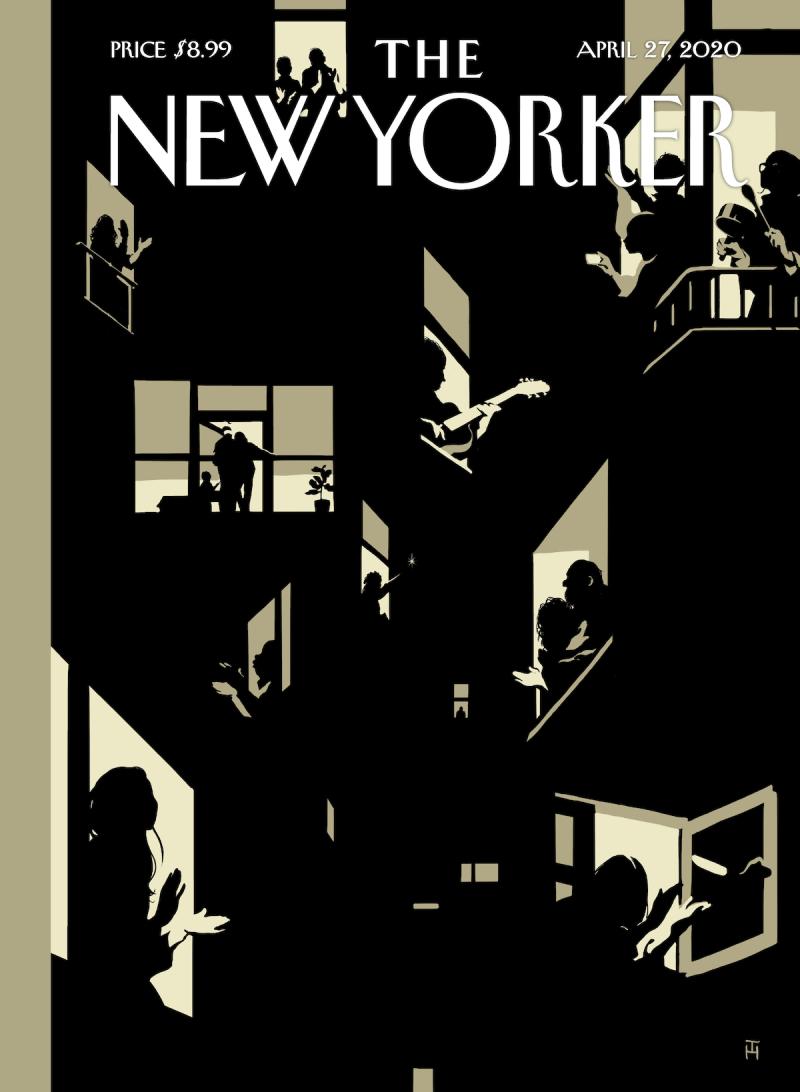