Housing Forecast: Warm and Sunny, With Limited Chance of Affordability

The Northeastern U.S. had a heck of a winter with record setting snowfall and plenty of days with very low temperatures. Back in January and February many in the real estate industry I spoke with were lamenting the brutal weather and expecting a weaker housing market as a result. Admittedly I was incredulous at this widespread belief since the year before we went through a more intense polar vortex and 1Q14 U.S. GDP was revised to the negative due to the significant economic impact it caused. Yet GDP snapped back in the subsequent quarter. Blaming the weather is an always an easy to digest sound bite, usually included within talking points of state of the market releases by real estate trade groups and real estate brokerage firms.

I’m here to state for the record that it is always colder in the winter than the summer and the winter is when we tend to see snowfall. I’ll even go out on a limb and say that some winters are colder than average and some winters are warmer than average. The same goes for snowfall. When a potential homebuyer goes out in January to look at property and are uncomfortable doing so, do they cancel home buying plans for five years? No they wait a few weeks or so for the weather to warm up and resume looking at houses. Sorry for the sarcasm but I grow tired of the weather being the default explanation for weaker housing conditions at the beginning of each year. Get over it.

As for the NYC metro area, the first quarter results were generally better than the same period last year despite a harsh winter. Hmmm.

One of the big NYC metro regional housing stories of this week has been the decline or anemic growth of listing inventory since the beginning of the year. I wrote about falling U.S existing inventory which a few weeks ago. Inventory levels are generally below long terms norms across most of the metro area.

The Wall Street Journal did a nice recap on the state of the regional housing largely using our research and the trend showed generally more sales, less inventory and rising prices. The biggest focus for the regional coverage was the Hamptons market (plus nothing cooler then getting a chart made with your data). 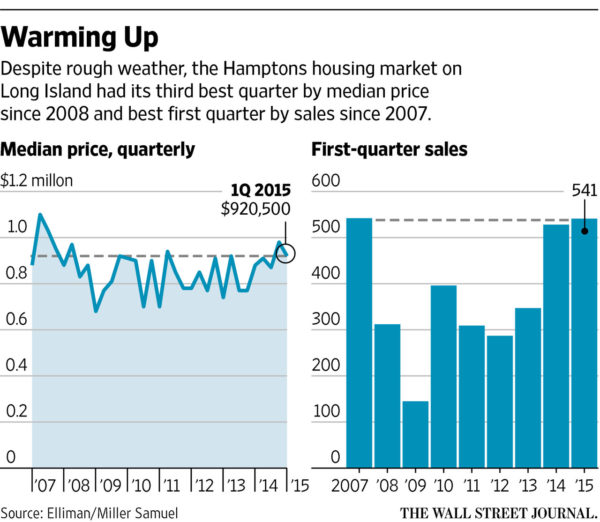 There was tremendous focus on the first quarter Hamptons housing market results – apparently the harsh winter had no apparent impact on a largely second home market. Some of the results that we weathered (sorry).

Inventory is falling in other parts of the county we cover. Aspen and Los Angeles are seeing declining inventory as well.

No Schussing: Going Up That Slippery Housing Market Slope

This week capped a four week gauntlet of 17 market report releases covering the first quarter of 2015 for Douglas Elliman. I was pretty excited about the research behind our two newest reports for Aspen, Colorado and Greenwich, Connecticut as well as second editions for Los Angeles and Fairfield County, Connecticut.

There’s a lot of information here to digest. Pull out a chair and read it on your balcony or backyard no matter what the weather is.