Of Shrimp, Feng Shui and Housing Some Righteous Indignation

I’m probably dating myself but back in college, I loved the band Pink Floyd and all their splendid weirdness. A big part of that love was born from the fact it drove my roommates crazy as devotees of the glam rock genre, i.e. Boston, Styx, REO Speedwagon, Journey, etc.. Sadly they missed out on the debate of important things like where the band name came from – was it inspired by honky tonk jazz pianist Floyd Cramer or blues guitarists Pink Anderson and Floyd Council? (the latter two). Could Foreigner cut songs like “Careful with that Axe Eugene?” I don’t think so. Or could Queen write Several Species of Small Furry Animals Gathered Together in a Cave and Grooving with a Pict?” Never. I find much of their early stuff unbearable to listen to now, but thankfully Pink Floyd still has a lot of great music in their catalog.

This is some sort of analogy about how I have always enjoyed taking the other path and annoying others by not following the herd.

Thankfully Pink Floyd gets a species of shrimp named after it. I am complete.

But enough of the stuff you came to Housing Notes to read about. Let’s get back to the housing market.

Douglas Elliman Real Estate, the fourth largest real estate firm in the U.S., published our research for Greenwich and Fairfield County, Connecticut this week. I’ve been authoring the expanding Elliman Report series for 23 years (I started listening to Pink Floyd well before that). Apparently Wall Street loves a good Greenwich, CT housing story as the Bloomberg article: Greenwich Homes Get Cheaper and Finally Start Selling Again was the most emailed on the Bloomberg terminals worldwide yesterday.

And the article had a chart that tells the story about the uptick there after a weaker 2016. And well, who doesn’t love charts? 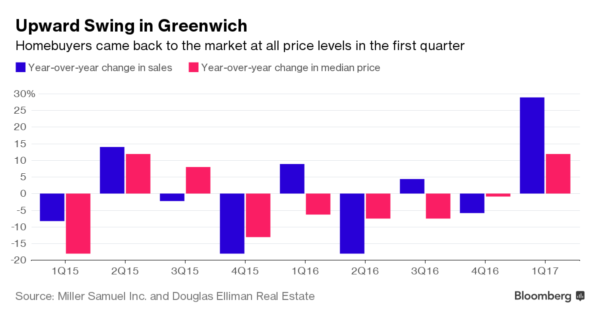 Christopher Fountain One of the more outspoken pundits of the Greenwich housing market has been Christopher Fountain of the For What It’s Worth blog. I check in occasionally because he brings greater transparency to the housing market. His oratory is snarky, even troll-like, as many good bloggers are, but it works and has earned him a rabid following. He called out the Bloomberg reporter to include the original list price with a prior brokerage that wasn’t in the MLS information. And the reporter duly updated the story. Transparency in action is a good thing.

Theresa Hatton – Director of the Greenwich Association of Realtors There was an online article that quoted her being “dismissive” of the Bloomberg story which means she was being dismissive of my research. The quote is representative of the primary reason why an MLS should never be the source of objective analysis on a housing market. An MLS is comprised of a board, usually comprised of company owners, and software developers, usually outsourced. The perception of the MLS as a wealth of real estate insight is simply misplaced. You can see it here:

“The contention about discounts is actually normal in any market and at any price range,” she said. “Homes that are on the market longer sell for less than asking price, homes priced to sell are sold quickly and usually for at or above list price. It is universal across all real estate markets as cited by real estate author and trainer, David Knox.”

This is gobbly-gook word soup. This reads like a horoscope – while it makes sense and tells you things, it has nothing to do with the market specifically right now. They are basically telling consumers that the market never changes other than the four seasons so it shouldn’t be analyzed.

Here’s why this line of reasoning is so misinformed. The story of Greenwich housing is one that changed over the past year – it’s better. The national election held back demand throughout 2016 and after the election, there was a release of pent-up demand in the first quarter of 2017. We are seeing that seller sentiment is coming more in line with market conditions after being very detached from the market for several years. This is happening throughout the region. The detachment from market reality was best illustrated in the Greenwich broker reaction to the same reporter’s story last fall on Barry Sternlicht’s comments about Greenwich.

Here is something I wrote in my email to my colleagues on the Greenwich-Sternlicht event [redacted/edited for privacy]:

When I first starting the reports in Greenwich, every single agent I met or spoke with complained about the seller disconnect in high-end Back Country. There were limited sales because the listing prices had been very high for years. It’s funny but the Bloomberg piece was a simple tongue in cheek on his offhand remark and they cited our reports. But because a number of brokers and firms reacted the way they did, it became a bigger story. Instead of focusing on a titan of industry overpricing their home, it became a fight over the honor of the community – which wasn’t the point. A top agent in Greenwich told me she couldn’t believe the level of outrage in the agent community and that they completely missed the point – sellers of big homes have been over pricing their properties for a decade – they never saw the boom that the city enjoyed after the financial crisis. I spoke about the Greenwich-Sternlicht event at a presentation right after it happened. The Greenwich brokerage community was hellbent on protecting the honor of their sellers who were wildly off target in their perception of value. In the brokerage business, I can’t understand why an agent would bother listing a property in Back Country i.e. $15M when it is worth $9M? When I checked on this market a few months ago, there were 15 listings and only one sale in a particular price range (we do a lot of appraisals in Greenwich). That’s because the prices were set way above market. The Sternlicht comment was a GIFT to educate sellers on accurately pricing, but the conversation turned into “what a beautiful community we have.” Of course, now the market has rebounded a little which shows that there was no damage done. Of course. The market is the market.

“There’s a pearls-and-Mercedes view of Greenwich,” Schoenberg said. “That’s not how we want to the world to see us.”

One last thing on this overanalyzed topic that somehow seems to apply:

In addition to Greenwich and Fairfield County, Connecticut, Douglas Elliman Real Estate published a slew of our market research in South Florida. The coverage of the report releases are shared in the links at the bottom of Housing Notes.

Here’s my simple takeaway on all the markets as a whole:

Across the 8 different reports we are pushing out tomorrow, we saw mixed results, but more markets saw an increase in sales activity of their respective overall markets. More markets showed gains in median sales price as well. While there was more volatility in luxury price trends with a shift towards smaller luxury units. I don’t see this as a firm trend but it did influence prices this quarter. The market is clearly weaker at the top than it is everywhere else but the luxury results across all the regions could be described as performing better than they were in previous quarters based on sales and price trends. There’s no smoking gun here in that the metrics are someone all over the place but when looked at as one group, the region is seeing somewhat better results than it did throughout 2016.

Here are the South Florida reports that came out:

We continue to read about high-end sales and large discounts. They go together. Sellers are returning to the market – they aren’t leaving money on the table to do so. It was never their’s to claim. This is a good thing in a market healing process. Buyers and sellers get together on price and transactions occur – it’s as simple as that.

Demi Moore just sold her Central Park West penthouse apartment with a 40% discount for $45 million – hmmm, where have I heard of such a big discount before?

Whenever you read of a very large sale, take a close look at the size of the discount. It’s a statement of how overpriced the property was, to begin with, not how much the market has fallen.

Are landlords creating another problem? There is a great read on this in the Real Deal. Tenants may worry about “rent shock” at renewal and may avoid rentals with big giveaways. I shared this chart 2 weeks ago but I love how it illustrates how high the share of concessions has become. 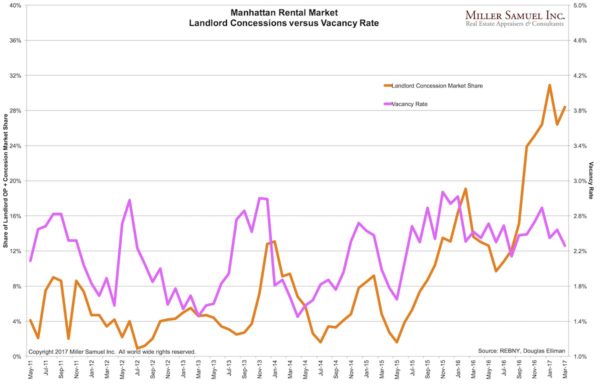 When a market grows soft, they may start providing incentives to entice buyers such as decorating allowances, paying mansion and transfer taxes, etc. All of this is done to protect the price published in public record. They worry about cannibalizing future sales. But when the market has corrected far more, then incentives are a waste of time. Here’s another good read on the topic.

I’m going to say this at the outset, my fellow appraisers…sometimes you have to make hay when the sun shines and that’s been my situation over the past few weeks, so I’m a little light this week in Appraiserville. The Appraisal Institute can rest easy this week. But so what? Admittedly I found some perfect comps and isn’t that what’s really important?

ASA and NAIFA Are Going To Merge

This is good news for both organizations who are likely consolidating resources and filling a void left by the Appraisal Institute who has lost the confidence of their membership and continues to work against them at the state and national level – pushing for alternative standards in order as a pathway out of irrelevance. Good. This one of the reasons the state coalitions sprung up in more than half of the states. Monopolies never seem to last forever.

In Housingwire: The American Society of Appraisers, which bills itself as “the original multidisciplinary valuation society,” and the National Association of Independent Fee Appraisers, which calls itself “the leading voice for independent professional real estate appraisers,” announced that the groups reached a “Memorandum of Understanding” that will eventually lead to NAIFA merging into ASA.

Get ready for a supersized Appraiserville section next week.

If you need something rock solid in your life (particularly on Friday afternoons) and someone forwarded this to you, or you think you already subscribed, sign up here for these weekly Housing Notes. And be sure to share with a friend or colleague if you enjoy them. They’ll eat more shrimp, you’ll discover feng shui and I’ll listen to those early Pink Floyd albums again.