Greenspan spoke this week at symposium [2], held in Jackson Hole, Wyoming, sponsored by the Federal Reserve on the legacy of his 18 year era. He took the position that the housing market now suffers an imbalance.

Low “Risk Premiums” (A new mantra?) This trend reflects what Mr. Greenspan said was the increased willingness of investors to accept low “risk premiums, a willingness based on a complacent assumption that the low interest rates, low inflation and strong growth of recent years are likely to be permanent.” [4] 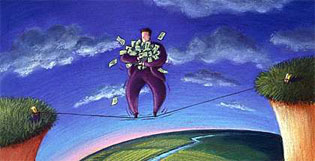 His concern is when (bond) investors become more cautious, yields will rise, lowering housing values and then selloff of bonds that caused rates to drop in the first place. “This is the reason that history has not dealt kindly with the aftermath of protracted periods of low risk premiums.”

Other notable Greenspan-speak, etched in the public conscience are:

A Conundrum – [6] An inverted yield curve appears to loom on the horizon. [7]

A Frothy Housing Market – [8] “The Fed feels it needs to squeeze more air out of the market – the housing market in particular, although the Fed has stressed that it’s not targeting housing with interest-rate policy.” [9]

Irrational Exuberance – [10] Greenspan first used the phrase in 1996 several years before the stock market corrected in 2000 but it came to define the rapid run up in stocks in the 1990’s. The analysts that missed the dot com bubble now seem to be the ones warning us about the housing market boom’s eventual conversion to bust.