The National Association of Realtors has launched its first ever media blitz to the tune of $40 million to unspin the spin of the past 5 years. When the market was rising, houses seemed to sell themselves and the news was always up, up up, The NAR, until July of this year, kept the mantra going even after the market had cooled at the end of last year.

It severely damaged their credibility as market experts because at some point, the market is the market. Its a shame because they provide a lot of good information. In July, we first started to hear comments in the order of “sellers need to price realistically” because if properties aren’t selling, even though the hype says its a good market, then the membership is not making money.

The assumption by the consumer is now if the market is not going up, then it must be going down.” As a result, the number of sales has fallen sharply this year as the consumer simply waits until the time is right.

The brokerage community largely feels that the media has been responsible for the housing downturn because they have been churning out so many negative stories that buyers have lost the sense of urgency to make a decision and are simply waiting for the market to come down. I have been to a number of Realtor functions where the media is made to be responsible for all negative aspects of the housing market, which is simply ridiculous, but I imagine its a statement of frustration. You tend to remember all the red traffic lights you saw when you are running late to an appointment.

The 1M+ NAR membership beseached the trade group to do something about it the message being delivered to the consumer. They decided to launch an ad campaign [NYT] [1] to send a different message out, to better present NAR’s side of the story:

The National Association of Realtors will begin promoting the notion that buying a home is an unalloyed good in a $40 million campaign that boldly declares: “It’s a great time to buy or sell a home.”

The ad refers to buyers and sellers but in reality, the target market is clearly buyers. There are already plenty of sellers out there as evidenced by rising inventory levels over the past year.

The danger in doing this, is that the consumer could construe this as a sign of desperation [NYDN] [2] and hunker down further. However, I think that the net result will be favorable and its probably something they should have done as the market began to turn last year, not after the fact. 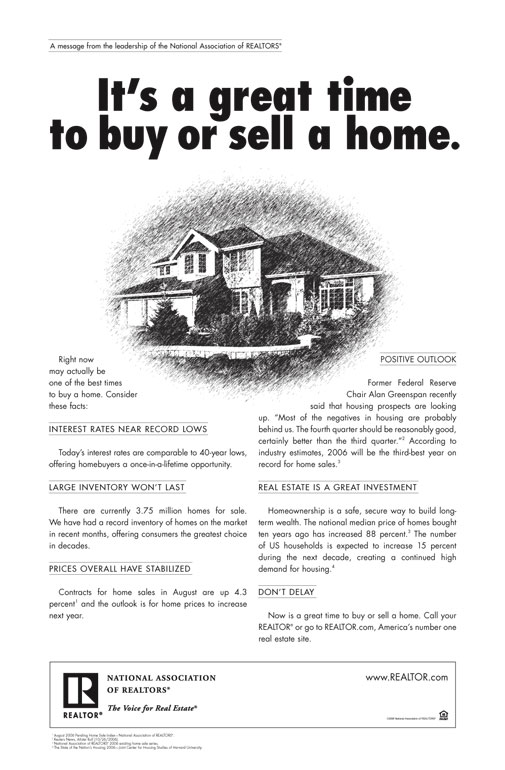 The bullet point message ad is a good approach, although lets look at each point made:

I think if the ads are run frequently enough, it may help stimulate some sales activity and it shows to its membership, that NAR is working for them. However, running an ad is not going to create another housing boom.

UPDATE: Good grief, I went back and re-read this post. Normally I don’t go back and make changes but my grammar and explanations were particularly horrific this morning so I made some changes. Hope I don’t have to go to Iraq now [3]…