The bi-annual real estate issue of New York Magazine [1] had been talking about a crash since 2003 [2]. However this year, they apply a more reasonable discussion to the burning question: Why is New York different and how long will it last? [1] (since their new owners took over a few years ago, editorial content has returned the magazine to “must-read status”). 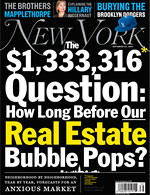 Aside: Of course I love the fact that the average sales price for Manhattan 2Q 2007 presented in the Prudential Douglas Elliman Manhattan Market Overview [3] that my firm authors of $1,333,316 is on the cover (something about loving numbers).

While I am not in total agreement with all the content, it is a refreshing approach because the article tries to present both sides in a best and worst case scenario format. The take away is weighted toward the pessimistic view.

There is discussion of

Hyman Minsky’s ingenious model of asset bubbles, economic stability breeds riskier and riskier investors: First come the “hedge borrowers,” who play with their own money; they are followed by “speculative borrowers,” who have enough cash flow to keep the lender at bay but not enough to cover the principal investment, and finally “Ponzi borrowers,” who are, as the name suggests, borrowing to refinance other debts they can’t meet, in the wild hope that the market will keep climbing.

Of course, New York had very little speculation during the New York housing boom so this applies more to borrowing habits of market participants.

The article references economists I admire and have quoted in the past: Joseph Gyourko, Christopher Mayer, Todd Sinai, Edward Glaeser, Robert Shiller and Nouriel Roubini (whenever I am feeling too optimistic) plus several others. Brad Inman coins the phrase: “Irish Effect.” They also included my friend Noah Rosenblatt, who runs Urbandigs.com [4] and is someone I recently discussed the housing market for hours after midnight on the tarmac of Atlantic City’s airport on a grounded jetBlue flight from the recent San Francisco Inman conference [5] (how cool is that?).

Worst Case: [6] In this scenario, a full-fledged credit crunch rips through the system. The August employment figures, showing no growth for the first time in four years, are the beginning of a serious downward trend. The economy heads for a hard landing, and an all-out recession ensues.

Best Case: [7]In this instance, the current liquidity problem is contained by the end of the year. Employment figures pick up in September. Global growth continues.

A correction to the article is needed: The widely quoted Case Shiller Index doesn’t include co-op and condo sales as indicated in the article, which is 96.9% of the Manhattan sales market, nor does it include new development and foreclosures.

This just in: Lehman’s net declines, but less than analysts expectations. [8]